Why you need an aftermarket harmonic balancer

Found at the front of the engine attached to the snout of the crankshaft, harmonic dampers are used to quell the harmonics of the crankshaft and are vital parts of your hot rod.
12 Aug 2019
Evan J. Smith, National Dragster Contributor
Racing Technology

A V-8 fires every 90 degrees of crankshaft rotation, so the power is applied in short, continuous bursts. And while your engine provides continuous power through the rpm range, it’s actually a series of power pulses that keeps the crank moving. For example, imagine pedaling a bicycle briskly. In this case, you’ll be applying maximum force for only a short period (in degrees of crankshaft rotation) as you push past TDC, however, the power seems to be applied seamlessly. Now, imagine your legs firing as pistons rather than the smooth flow of a human pedaling.

As you can imagine, the force within a race engine is far greater than what you can generate with your legs, and at times, it’s much more abrupt. Because of this extreme force, the crankshaft is subject to torsional deflection. This twisting, followed by the metal rebounding, causes harmonics, even on robust aftermarket crankshafts.

Over time, the effects can lead to cracks and/or a failure. So, with that, as the name implies, a properly designed harmonic balancer will absorb harmonics and vibration and keep your bottom end alive.

There are three major types of balancers: elastomer, fluid, and friction. The elastomer type uses a rubber material, which controls much of the vibration. Viscous or fluid type uses fluid to absorb the flexing energy. Lastly, friction-style dampers rely on internal clutch discs to quell harmonics.

“High-performance balancers are necessary to prolong the life of your engine,” said Nick Orefice, of Fluidampr. “You need a damper that will perform like it should in the most extreme conditions that stock dampers cannot do. Constantly changing and tuning race engines is what keeps teams competitive. With every change made, the harmonics of the engine change with it. A Fluidampr performance damper removes the guess work. It is engineered to protect over a wide band of frequencies throughout the entire rpm range, including high rpm. That means you can modify the engine and not worry if your harmonic balancer is properly tuned.”

Graham Withers, president/owner of Pro/Race Performance Products, added, “Gas pressure in the combustion chamber has a direct relationship to the amplitude of the torsional vibration. Uncontrolled torsional vibration can damage and reduce the life of engine components. Examples could be rapid wear on the camshaft lifter lobes, stretching of the timing chain, grooving of the timing chain sprockets, through to causing the flywheel to come loose on the crankshaft.

“Uncontrolled torsional vibration also robs an engine of valuable brake horsepower [BHP]. The differences between an OEM and a high-performance harmonic damper would be clearly seen on a dynamometer. Both the Pro/Racer and Pro/Sport range of Dampers marketed by Pro/Race are SFI certified for competition and undergo annual testing for continued compliance.”

Withers also mentioned, “When building a race motor, the engine builder needs to consider the targeted rpm and BHP. An increase in gas pressure in the combustion chamber equals an increased twisting force on the crankshaft throws. This causes a deflection or twisting motion that is known as torsional vibration. The peaks of this back and forth motion are measured as amplitude. The function of the harmonic balancer is to reduce the amplitude of the torsional vibration peaks to an acceptable level. Most OEM harmonic dampers are not designed to cope with the rpm and BHP levels experienced in competition. That is why racers must consider a high-performance damper that is fit for purpose. For example, the SFI certified Pro/Racer dampers range have been spin tested to 18,000 rpm, well in excess of SFI requirements.” 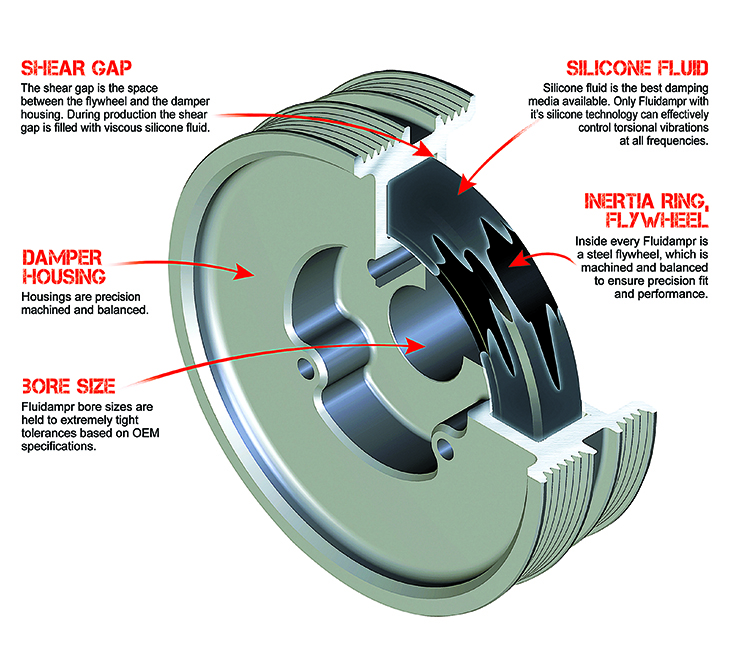 Chris Rose, of Innovators West, added, “As the power levels and rpm range increase on an engine, the harmonic waves being generated in the crankshaft can become an issue. A stock damper is calibrated for a specific power level and rpm range, and as you go beyond that point, the stock-bonded rubber damper becomes less effective and can fail with the damper coming apart. A performance harmonic damper that is SFI certified is calibrated for performance usage, and the SFI certification means that it has been tested to pass the containment standards in the event of a failure. NHRA requires the use of an SFI 18.1 harmonic damper for any car running faster than 10.99 in the quarter-mile. Beyond that requirement, any engine that has been modified for increased horsepower and/or higher rpm limit can benefit from the use of a quality harmonic damper.”

Orefice added, “[In many classes], racers are required to have an SFI-approved harmonic balancer to participate in sanctioned drag racing. Performance parts and power adders change the harmonics of the engine. Factory balancers come tuned to a specific frequency. Once you change your engine’s harmonics, the factory balancer is no longer doing its job. Drag cars have complete custom-built engines, there is no OE damper that will properly protect their engine.”

We asked Orefice to explain the construction of a Fluidampr. “A Fluidampr performance damper is an all-steel design that consists of three main components: the housing, an inertia ring, and silicone fluid. Parts are precision machined, balanced, and assembled in our ISO 9001:2015 certified machine shop located in Springville, N.Y. The housing cover is laser welded with the inertia ring inside to create a leak-proof seal. We then pump silicone fluid into the shear gap through fill holes. Fluidampr is the leading viscous harmonic balancer in professional motorsports since 1985. Today, factory race teams and multiple OEMs trust Fluidampr for its superior quality and durability to protect their performance engines. Stock dampers use an elastomer design that gets bonded together. Over time, the rubber breaks down and will fail, causing damage and premature wear to bearings and other engine components.” We’ve also seen cases where the outer and inner ring “walk,” which can create a nightmare when timing the engine. 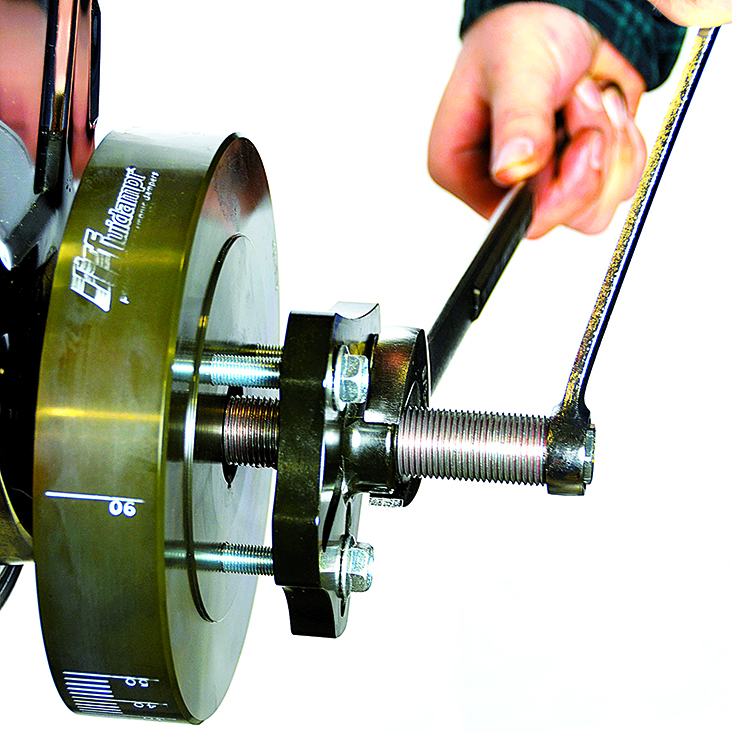 Rose explained the construction of an Innovators West unit. “The Innovators West harmonic dampers are unlike any other on the market currently. Innovators West dampers are friction-style dampers, made almost entirely of U.S.-made materials. The dampers use a set of clutches, inertia rings, and a Bellville spring to load the clutch pack. The harmonics transmitted from the crankshaft to the damper will cause the clutch pack to slip. This slipping of the clutch pack will help absorb the harmonics, turning them into heat. The aluminum body of the damper then helps to dissipate that heat. We have found this style of damper provides good service life and a larger tuning window than the standard viscous or elastomer damper. The bolt-together construction provides a secure containment for the clutch pack, achieving the SFI certification as well as providing the ability to send the damper in for inspection, rebuilding, or upgrades versus needing to buy a new damper every time.”

Pro/Race markets three different streams of product:
Pro/Street, Pro/Sport, and
Pro/Racer. “For the high end of engine performance, our
Pro/Racer harmonic balancers feature machined drive hub with a fine spline on the outer radius to couple to the inner surface of the elastomer dampening ring using a chemical bonding agent. The steel inertia ring is also machined with the fine spline to couple with the outer surface of the elastomer dampening ring, also using a chemical bonding agent. The effect of the spline is to nearly double the surface-area contact between the elastomer dampening ring and the hub and ring, thus eliminating any permanent rotational movement between the hub and the ring. 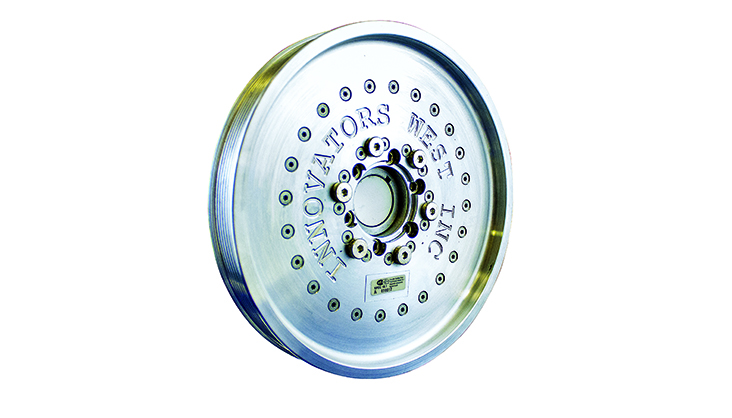 We were also curious about the effects on a supercharged engine because there is extra load from the drive belt. “On older Roots-style superchargers when using a rubber cogged belt, it is still somewhat common to run without a damper,” said Rose. “The constant drag of the supercharger along with the rubber belt stretching helped to dampen the engine. However, with today’s more efficient superchargers (screw, centrifugal, etc.), the new technology belts (Kevlar, composite, serpentine, etc.), and newer engines with lighter-duty parts inside them, the use of a harmonic damper is highly recommended. A harmonic damper will help to protect that expensive engine against those harmonics and should help reduce or eliminate the change of failure from those same harmonics.”

Orefice added, “An aftermarket balancer is important on all engines, but with a supercharger, you have additional loads on the front of the crank, which adds stress while adding power. As rpm climbs, raising the power and the stress, a high-performance balancer is needed to remove the increased torsional vibrations and protect the life of your engine.”

Lastly, we asked if there are any service tips to help achieve better performance or add to the life of the engine. “Using the proper tools is crucial,” said Rose. “Buying a good-quality damper removal and installation tool makes the process much easier. When installing a harmonic damper, always check for the proper press fit on the crankshaft snout. Too much press fit and it will go on hard or possibly be damaged on installation. Too little press fit and it will not properly transmit the harmonics from the crankshaft into the damper, rendering the damper ineffective.”

Orefice added, “One of the many great benefits of Fluidampr is that it does not need to be serviced or rebuilt. Once installed, the only thing left is to enjoy the engine protection. We recommend using a quality puller/installer when replacing your damper. It is
strongly recommended when installing a Fluidampr to apply a coat of anti-seize on the crank before installation. When removing and installing, it is important to check and maintain a .0005-.0015 press fit.” 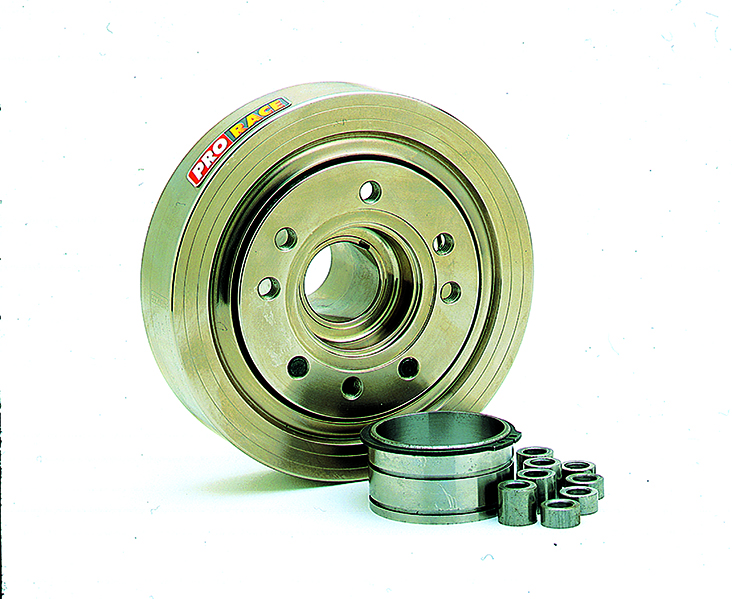 Typically, the crankshaft snout-to-hub inner bore is a slight interference fit. “Therefore, the recommendation is to pre-heat the damper in boiling water or a low-temperature oven to expand the bore of the Damper Hub,” said Withers. “A slight smear of grease to the inner bore of the hub will aid a quick installation, which is desirable before the heat transfers from the hub to the crankshaft snout. Thread holes are incorporated into the drive hub flange to facilitate using a puller to remove the damper from the crankshaft. Various mechanical and hydraulic installation and removal devices are available in the market.

“Harmonic dampers on similar engines will sometimes need to be located on the crank snout in different locations. The aim is to have correct alignment between all of the pulleys. Spacers are available in different thicknesses to ensure correct placement of the damper. All OEM engines are initially created as ‘internally’ or ‘externally’ balanced. Externally balanced engines, as the name suggests, require an external balance or ‘counterweight’ to be fitted to the damper prior to installation. Due to customizing and use of aftermarket parts, it is possible to have a rotating group in the engine, which is ‘balanced’ and therefore not needing a counterweight, even though the engine would have had one in its original configuration. In these cases, the counterweight, which bolts in, must be removed from the damper prior to installation. It is important to know whether your engine is internally or externally balanced.”

Evan J. Smith is the owner of REVan Media Inc., a contributor to Hot Rod and Muscle Mustangs & Fast Fords magazines, and regularly competes in Stock. 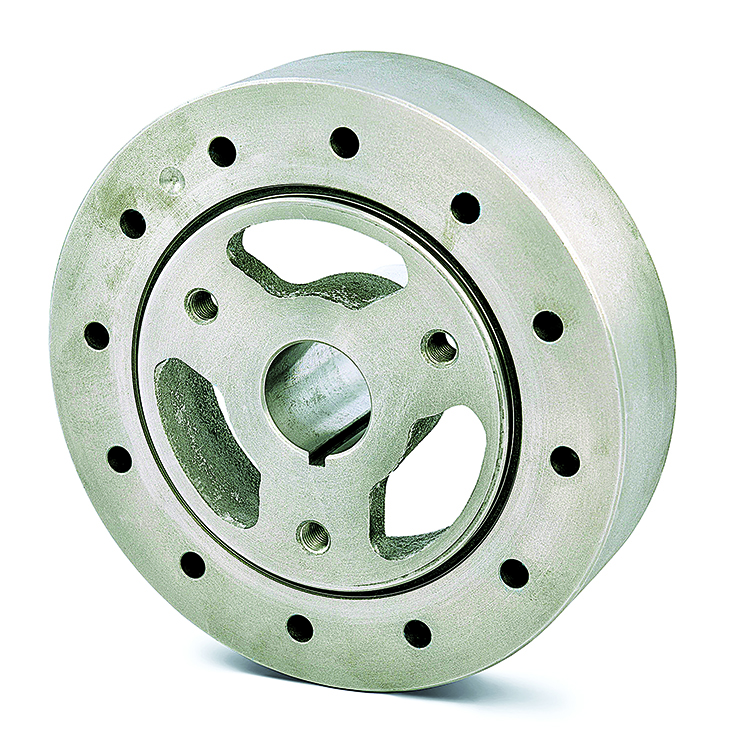