#StumpBob: Which two drivers have shared the winner's circle the most?

With nearly 1,000 national events in the history book, there have been a lot of joint winner’s circles, but which two drivers have shared the most winner’s-circle celebrations?
03 May 2021
Bob Frey
Stump Bob

With nearly 1,000 national events in the history book, there have been a lot of joint winner’s circles, but which two drivers have shared the most winner’s-circle celebrations?

This is one of those questions where, if you were in a bar, you could get hit. After all, did any Sportsman racers actually “share” the winner’s circle with a pro racer? OK, so that’s a technicality, and it really doesn’t matter since the answer includes two of the all-time greats: John Force and Warren Johnson. That duo actually shared the winner’s circle 27 times and that’s the most of any pair of racers, Pro or Sportsman. That went from their first “shared” winner’ circle at the 1988 NHRA Finals to their final get together at the Denver race in 2003. They did it a one U.S. Nationals (1993), two Winternationals (1993 and ’97), and four Gatornationals (1992, ’93, ’94, and 99), among others. They won a lot of races and won a lot of them … together. 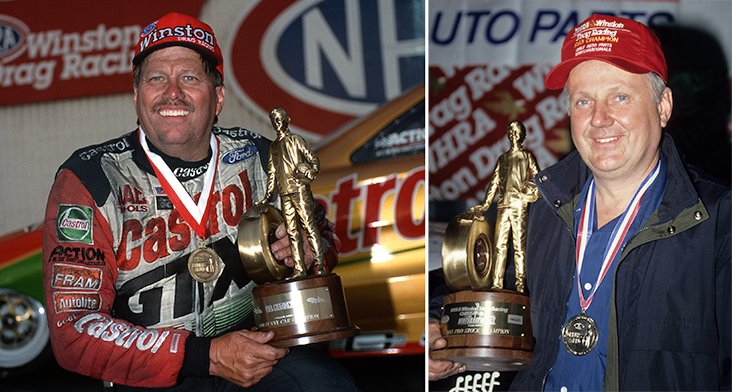 Force also shared the winner’s circle with David Rampy a lot, like 25 times and Dan Fletcher 23 times including 1994 when both John and Dan “swept” the Western Swing.

Have a stats-based question and want to try to Stump Bob? Click here to send us an email, or use Twitter with the hashtag #StumpBob.