#StumpBob: How many drivers have competed in both Top Fuel and Pro Stock?

With “Mr. Versatility” Alex Laughlin driving a Top Fuel car at Denver, NHRA historian Bob Frey was asked, “How many people have competed in both Top Fuel and Pro Stock at an NHRA race?” Good question, so here’s what he found.
29 Jul 2021
Bob Frey
Stump Bob

Although nobody actually wrote in to “Stump Bob” with this week’s question, I did have several folks e-mail me about it, so I figure it’s fair game. With “Mr. Versatility” Alex Laughlin driving a Top Fuel car at Denver, I was asked, “How many people have competed in both Top Fuel and Pro Stock at an NHRA race?” Good question, so here’s what I found.

There have been nine drivers who have “competed’ in both classes at NHRA events, although only seven have ever qualified in both classes at a national event. Several of them may come right to mind, like Kenny Koretsky, Dave Connolly, and Troy Coughlin Jr.

Others may be familiar to some of the “older” fans out there (hey, I’m 74, so I can use the phrase “older” if I want to!!), including Bruce Larson and Jeg Coughlin Sr.

Including Laughlin, that’s six, so who is No. 7? How many of you remember Paul Longenecker? Yes, I said Longenecker with an “E” in the middle of his name? Well, Paul, who made a name for himself as a Top Fuel driver, not only competed but he qualified in a Pro Stock car at three races in 1970 before turning his attention to Top Fuel, where his best NHRA finish was at the 1977 Gatornationals where he lost to “Big Daddy” Don Garlits in the semifinals. Yeah, but did Garlits ever drive a Pro Stock car? I won’t mention the fact that Longenecker once has a Top Fuel car — his Top Fuel car — with his name spelled wrong on it (they left out the “E” in the middle), but he was a very nice guy and an excellent driver. 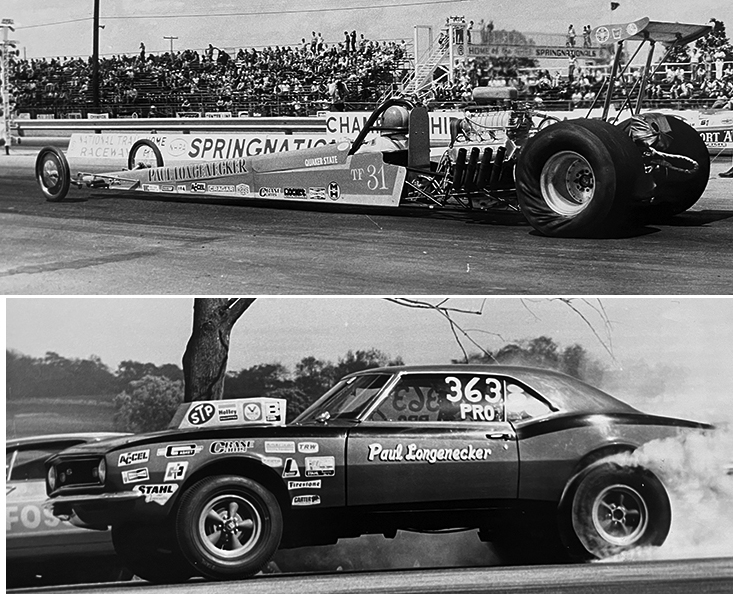 The other two who “raced” at NHRA events in both classes may surprise you (they surprised me). Doug Kerhulas, who is most famous for his years in the Top Fuel class, did run a Pro Stock car for a little while, and although he never ran at a national event with it, he did compete at a couple of Division 7 events in the early 1970s. The ninth person is Chuck Cheeseman. Yes, that Chuck Cheeseman of Top Alcohol Funny Car fame. Cheeseman ran a Pro Stock car in Englishtown and Indy in 1976 and later ran a Top Fuel car in Columbus in 1979. While he didn’t qualify with either car, he did run both at NHRA national events. Who knew?

To the best of my knowledge, as limited as it may be, that is the list. As always, I am open to any corrections or additions to the list.

By the way, one of those nine is the only driver that I know of who qualified at an NHRA national event in all three Pro classes: Top Fuel, Funny Car, and Pro Stock. Any guesses?

(Questions should be stats-based. No questions like "Who was the first to run 300 mph?" or "Which racer is nicknamed 'Big Daddy'?")