Fire and despair in the desert

It's one thing to lose a race car to fire on the dragstrip and another to lose it in a trailer fire on the way to the track. John Lombardo Jr. recounts the "surreal and unpleasant night" in 1984 when legendary Funny Car owner Joe Pisano's rig burned to the ground in the California desert.
26 Feb 2021
Phil Burgess, NHRA National Dragster Editor
DRAGSTER Insider

It's no secret that nitro Funny Car racing can be a perilous endeavor. Mechanical failures on nitromethane-burning engines have been around since the class' inception in the mid-1960s and are a foreseeable if not predictable result of staggering demands on the running gear and other hard parts.

It's one thing, of course, to lose a race car to fire on the dragstrip when oil or fuel touches hot parts and spreads to the racecar body. Heck, just look at Alexis DeJoria's scary fire last fall in Dallas and you can see that it can get real ugly real fast.

But it's a whole 'nother Oprah when you lose your car to fire before it even gets to the racetrack. Trailer fires are rare but not unknown, and with a trailer full of oils, greases, and solvents, a tiny spark can quickly evolve into a raging inferno. Just ask the crew of the NAPA Auto Parts Funny Car team, which suffered a trial by fire in Arizona on the way to last year's Winternationals, or the KB Racing team, who lost Greg Anderson's entire rig in a California freeway fire after the 2010 World Finals. 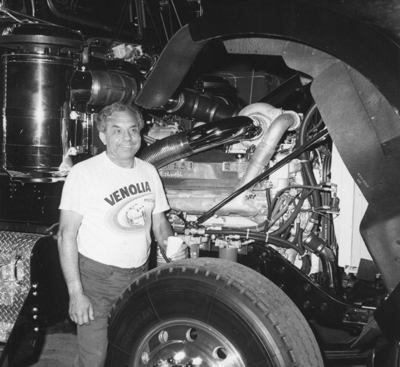 Until earlier this week, I could only imagine the frantic scene of crewmembers frantically circling a blazing rig, trying to either put out a fire or salvage what they could. Now I know.

Last week's story about Denny Savage included a reference to the trailer fire in Needles, Calif., that destroyed the Joe Pisano Funny Car on the way to the 1984 US. Nationals. Now, Pisano was a guy known for having some of the most beautiful race equipment in the pits, from the way the race cars were painted all the way to the tractor-trailer. He was proud of his equipment. That's him pictured here, posing with the tractor from his hauler.

After reading my piece last week, John Lombardo Jr. dropped me a line to let me know that he, too, had been with Savage, his son John, and Kirk Kuhns on that fateful trip, and provided a harrowing account of the scene.

John Jr., who worked on the race cars of his father, SoCal flopper veteran Lil John Lombardo before beginning his own national-event-winning career in Top Alcohol Funny Car, painted a vivid account of that "surreal and unpleasant night."

So I'll just turn it over to Lil Lil John, who clearly has a future as a writer once his driving days are done. 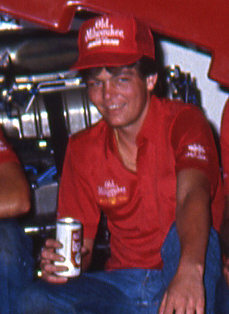 "My dad regarded Joe P. as one of his best pals; they were really tight. I was 17, wanted to go to Indy, and Joe was fine with me riding in the rig to save the $400 plane ticket. I drove to Venolia in Long Beach, Calif., parked my car, and hopped in the sleeper. Savage and Kurt Kuhns were on truck duty. I didn't know John Savage [Denny's son], but Tom Koning, another fellow that raced with my dad in the 70s, was pals with Denny, so there was a connection. We left after cheeseburger hour, crawled up to the overhead sleeper, looked at the road for a bit, then went to sleep.

"Fast forward a couple/three hours to the sound of the air brakes set and the doors open. I put on my shoes and headed out the passenger side of the rig. Denny and (I'm assuming) Kurt were alongside the trailer assessing the overheated rear axle or axles. About that time, the flame from one of the glowing axles just started up the fender of Joe P.'s beautiful trailer. My immediate thought, as we started throwing dirt at the flames, was, 'If we don't get this out quickly, Joe P. is going to be extremely pissed off!' 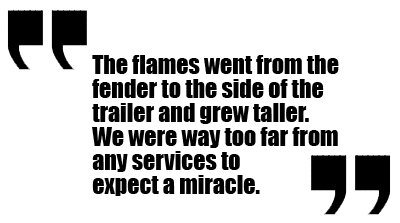 "The flames went from the fender to the side of the trailer. Someone opened the side door. All of the onboard extinguishers were no match for the grease or gear oil fire. Several truckers stopped to help and emptied theirs as well. The flames grew taller, and we were way too far from any services to expect a miracle.

"When Denny accurately assessed we were losing the battle, he instructed us to start unloading all we could from the side door. He went for the back door, in hopes of unloading some of the valuable assets (tow car, race car, spare motors, etc).

"This particular transporter was constructed with a forklift-style hydraulic ram to load the upper deck. Denny had no way of knowing the fire had already boiled the hydraulic fluid out of the rams. As he opened the second of the cargo-style doors, the folding car ramps flung it open and beat him to the ground. And I'm not exaggerating. The left door beat him to the ground. The ramps were splayed flat and useless. There was no shot to even drive the station wagon out, let alone any of the stuff we really wanted to save.

"About this time, Kurt or Denny decided to unhook the tractor, in case that was all we could save. We continued to unload stuff from the side door, but, of course, all of our luggage was the last in and the first out. Now the flames were getting pretty nasty, well above the top of the trailer. We threw what we could in the tractor and drove it further away from the trailer. 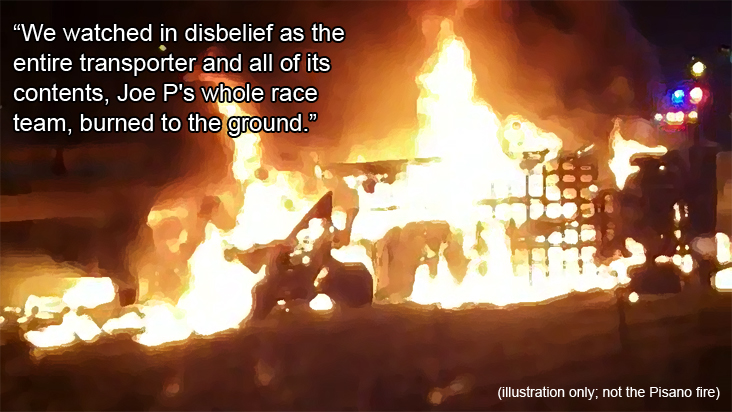 "Then as the fire grew, we moved further away, about a half-mile, best I can recall. Of course, this two-lane highway in the middle of the desert was closed. The cars started to stack up. We watched in great disappointment, and even greater disbelief, as the entire transporter and all of its contents, Joe P.'s whole race team, burned to the ground.

"There were full and partial drums of nitro on board. An hour or hour and a half into the fire, the partial drum went off like a bomb. Then 30-45 minutes later, when the full drum was hot enough, it was even more spectacular. But believe me, there was no joy in the fireworks. I think we were all considering just walking in the opposite direction of Venolia/Long Beach. I didn't even know how I was going to tell my dad, let alone ever again face Joe P. 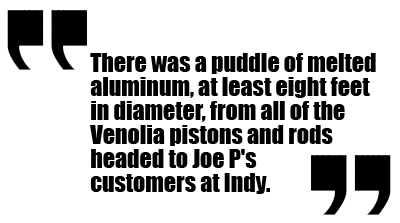 "The fire burned for hours. Early in the morning, it was calm enough for cars to start passing safely to the far left, so the backup was eased. Shortly after sunrise, a 40-year-old fire truck that appeared to be pulled from a museum (again, not exaggerating) arrived and sprayed a few gallons of water on the non-recognizable remains. I get it, we were pretty far from any real service, but it was sadly comical. There was a puddle of melted aluminum, at least 8 feet in diameter, from all of the Venolia pistons and rods headed to Joe P.'s customers in Indy.

"Sometime mid-morning, we piled back in the tractor and headed home. I remember like it was yesterday the truckers calling over the CB, 'Hey trucker in the beautiful tractor, is that your rig that burned down last night?' After about the third inquiry, Denny expressed his discontent, turned off the CB, and I don't recall another spoken word. We went to Denny's house and got a couple of hours of sleep. Shortly after, we returned the tractor and grabbed our cars. Joe P. had been made aware by this time and was not at the shop. I feel sorry for Margaret, Carmen, Frankie, or whomever he was with that morning. 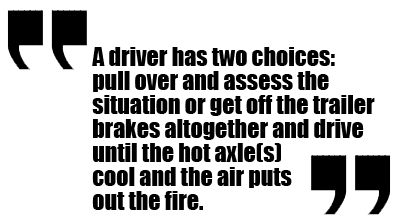 "I heard, secondhand, that the trailer brakes had been serviced just before the trip and may have been left a little 'tight.' I also heard that once a driver recognized the smoke from the trailer axles (whether in the mirror or from a fellow trucker/motorist), they have two choices: pull over and assess the situation or get off the trailer brakes altogether and drive until the hot axle(s) cool and the air puts out the fire. The latter is a gutsy move because you're risking the trailer, tractor, and everyone aboard. Later in life, as I owned and operated several different 18 wheelers, that scenario went through my head many times. I don't envy any driver put in that situation. And I still feel for Denny having to pull Joe P.'s tractor back into the yard at Venolia. For all we know, Joe P. and Savage would've won the Big Go if it weren't for some terrible luck." 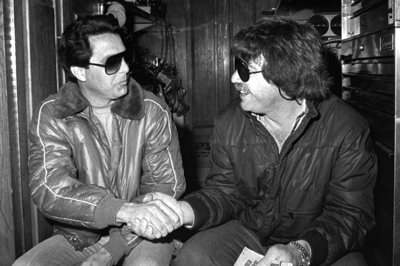 The later 1980s were way better for Pisano as he hired Mike Dunn into the seat and with crew chief Gary Slusser, broke the 280-mph barrier and scored a handful of wins. 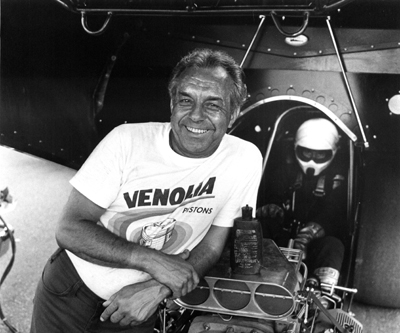 Glenn Mikres took over the car in 1991 and qualified No. 1 at the Winternationals, set low e.t. and top speed, and reached the final round, only to be turned back by John Force. We lost "Papa Joe" to a heart attack later that season at the Mile-High Nationals in Denver just as Dale Pulde was getting ready to take over the wheel. Pulde and Pisano's family kept the name alive for several more years of Funny Car racing but never reached another final.

Pisano was an amazing man, generous and beloved by all. A long time ago (2012), on the anniversary of his death, I wrote this column, sharing some of his thoughts about life and Funny Car racing.

Thanks again to John for sharing his memories of that crazy night and giving us all a reminder, as trucks and trailers start to head out for this season, of the perils that may lay on the road ahead and allow everyone to think about what they can do to prevent such a tragedy before it ignites. Stay safe out there.