We wrap up our three-part look at memorable moments from the 60 years of the NHRA Winternationals with the two most recent decades, the 2000s and the recently completed 2010s. Great legends of the past give way to new legends in the making as the Winternationals history roared on.
07 Feb 2020
Phil Burgess, NHRA National Dragster Editor
DRAGSTER Insider

We wrap up our three-part look at memorable moments from the 60years of the nHRA Winternationals with the two most recent decades, the 2000s and the recently completed 2010s. Great legends of the past give way to new legends in the making as the Winternationals history roars on. [Part 1: 1960s and '70s | Part 2: 1980s and '90s]

Ron Krisher walked away unharmed from a harrowing crash in the first round of Pro Stock in which Kurt Johnson’s Chevy suffered damage after crashing into the guardwall while trying to avoid Krisher’s tumbling Pontiac. 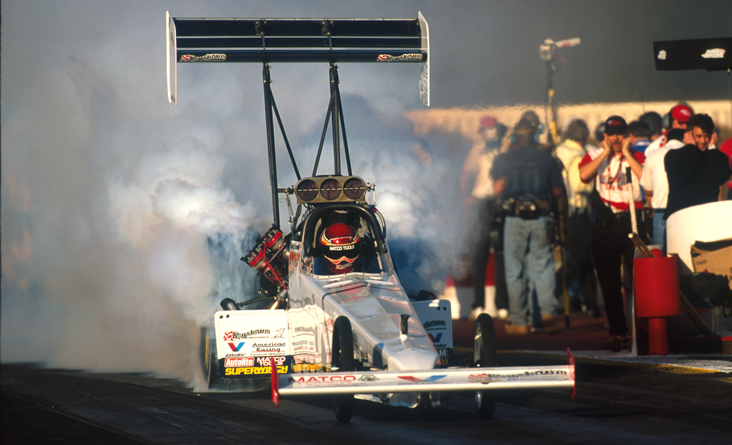 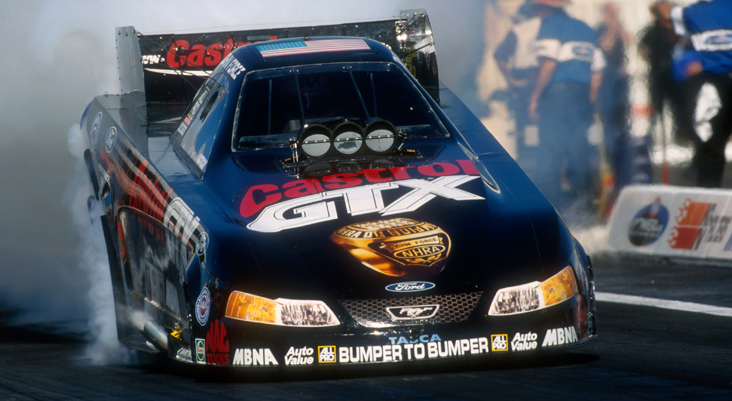 John Force defeated Del Worsham in a wild, tire-smoking final round to collect the 99th win of his career and his first Winternationals title in five years. He would become the first to reach the 100-win milestone a few months later in Houston. 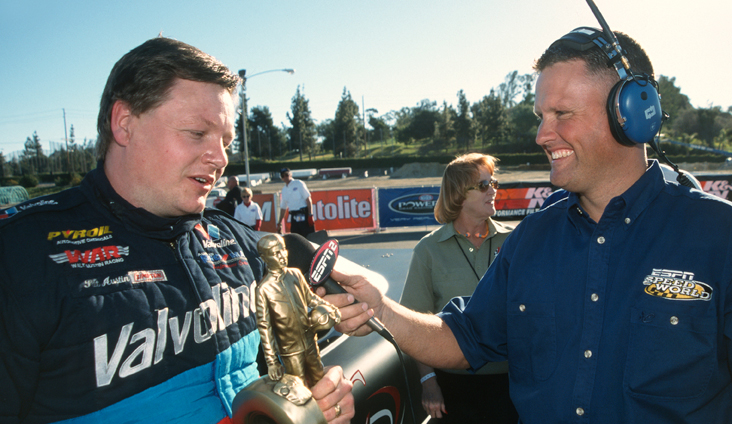 Greg Anderson launched the single greatest Pro Stock season in history with his victory at the 2004 opener. Anderson completely demoralized the field by qualifying No. 1, setting low e.t. and top speed and consistently running four hundredths or more ahead of the entire field. In 2004, Anderson set still-standing season records for most wins (15), final rounds (19), and No.1 qualifying positions (16).

After a body-destroying engine fire in the second round, Robert Hight and the Auto Club Funny Car team borrowed a spare body off of their show car and then continued to win rounds, culminating in a final-round conquest of Ron Capps. 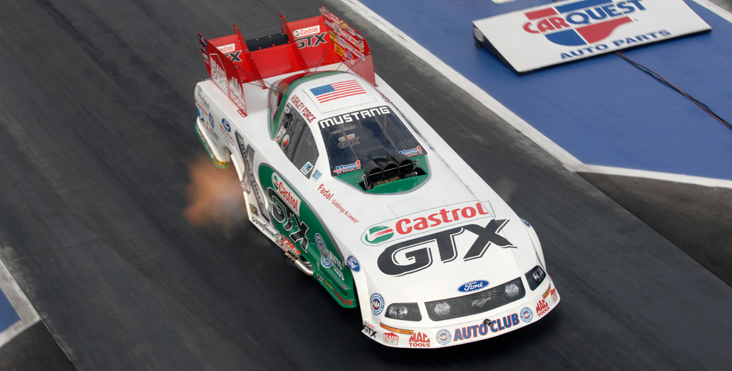 Ashley Force Hood became the first of John Force’s three daughters to follow him into the nitro ranks when she made her debut. The rookie qualified for the record field and would become the class’ first female winner the following year in Atlanta. 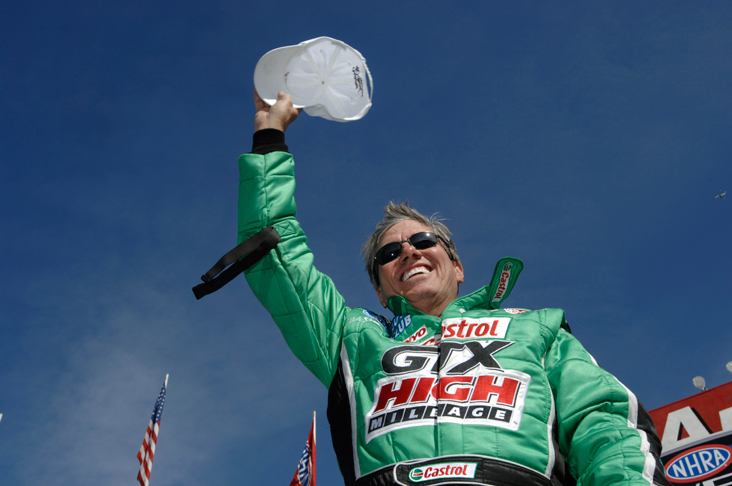 John Force returned to action just months after suffering what could have been career-ending injuries in a crash in Dallas and was one of three Force cars to make it to the semifinals, joining daughter Ashley Force Hood and eventual winner Robert Hight. 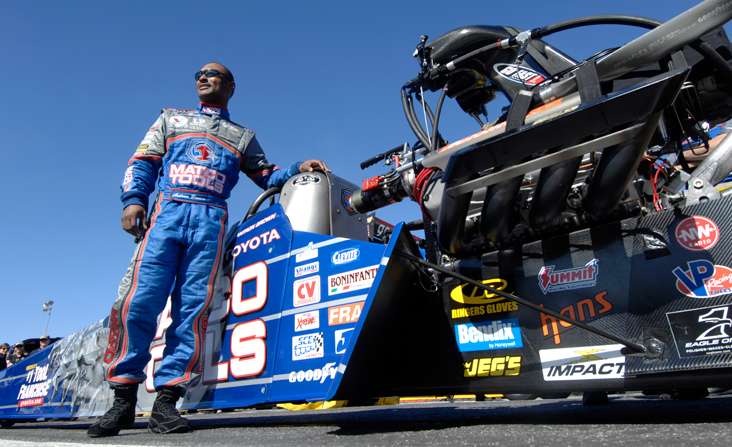 Former Pro Stock Motorcycle racer Antron Brown showed that he would be as adept on four wheels as on two when he qualified No. 1 in his Top Fuel debut.

Tony Pedregon suffered an enormous engine explosion in the opening round of Funny Car that sent him on a wild and fiery ride that made highlight reels on newscasts across the country and landed the 2007 champ on NBC’s Today show.

Forty years after a Cobra Jet Mustang won at the event in its debut, the feat was repeated when John Calvert drove his new 40th-anniversary Cobra Jet to victory in Stock.

At the 50th annual Winternationals, John Force, coming off his first winless season since 1986, scored his fifth Winternationals title on a holeshot final-round victory against Ron Capps. 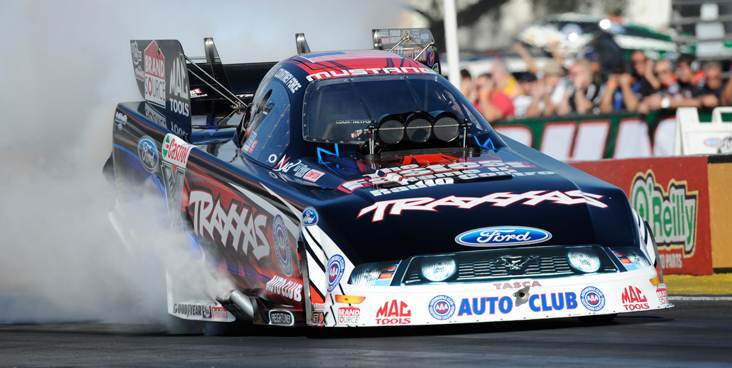 Courtney Force followed sister Ashley into the Funny Car ranks and not only qualified her Traxxas Mustang in its debut but beating Bob Tasca III in round one. 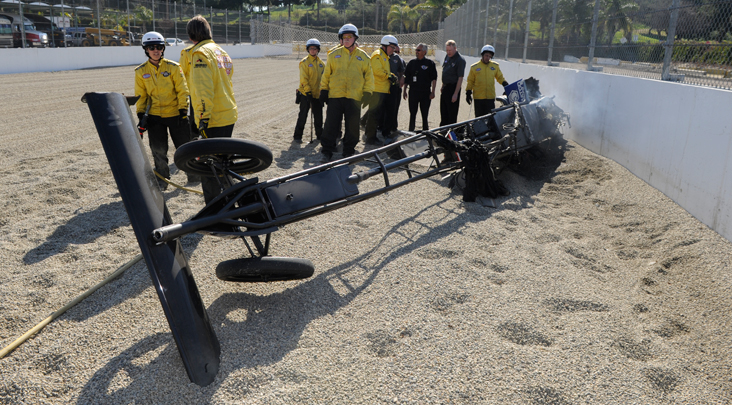 Antron Brown crashed heavily in the second round of Top Fuel. Although Brown walked away sore but pretty much uninjured from a terrifying tumble Sunday after his engine grenaded as he tripped the win light against David Grubnic, no repair was possible for Brown’s wrecked ride, so Tony Schumacher rode a semifinal bye run into his second straight Pomona final but lost there to Shawn Langdon.

John Force reset both ends of the Funny Car record en route to his 139th career win. After setting the speed mark to 324.12 mph earlier in eliminations, he made the second-quickest pass in class history, a 3.965, to defeat Matt Hagan in the final. Alexis DeJoria became the first woman to make a three-second Funny Car pass. 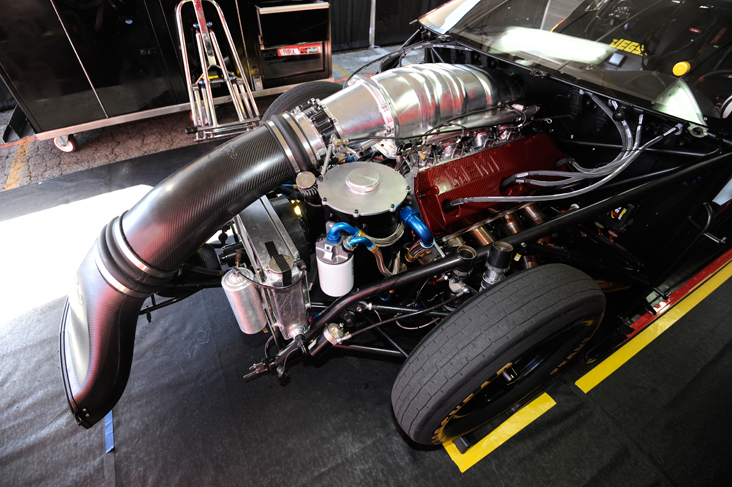 NHRA and FOX Sports kicked off their new partnership at the Circle K NHRA Winternationals, highlighted by live semifinal and final rounds Sunday, the first of 17 events that received that treatment that year.

Sportsman veteran Ed Olpin became the 21st driver in NHRA history to double up at a national event, scoring wins in Super Gas and Top Sportsman. It was only the second Winternationals double (Jimmy DeFrank, 2013).

Defending Top Fuel champion Brittany Force lost control of her car in round one and crashed into both guardwalls but escaped the crash relatively unharmed. Force was transported to a local hospital, where she was kept overnight for observation. Father John Force also made a hospital visit after suffering a massive explosion during Friday Funny Car qualifying.