The fabled NHRA Winternationals will celebrate its 60th anniversary at the 2020 Lucas Oil NHRA Winternationals presented by ProtectTheHarvest.com. In this first of three parts, here’s a look at memorable moments from the 1960s and '70s from the deep history of the event.
24 Jan 2020
Phil Burgess, NHRA National Dragster Editor
DRAGSTER Insider 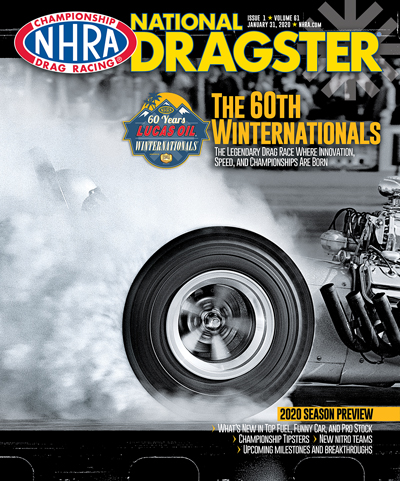 The first 2020 issue of National Dragster contains a wonder feature saluting the upcoming 60th Lucas Oil NHRA NHRA Winternationals, a race is so steeply ingrained in the history of the sport as to sometimes be inseparable. Don Garlits, Don Prudhomme, Bill Jenkins, and Connie Kalitta all first stood in an NHRA winner’s circle in Pomona. It’s the official national event birthplace of Top Fuel and Pro Stock. It’s where rear-engined Top Fuelers and 500-cid Pro Stockers first made headlines. It’s been the site of career-launching wins and upset victories that later turned out to be not so surprising. There have been more wild crashes, broken records, and incredible drama than any race deserves, and I’d rate it right up there with the U.S. Nationals in those categories.

Being a hometown boy with a deep personal history for the event, it wasn't very hard to pull together, It started out as a couple of top-10 lists, but the deeper I slipped into my memory banks and into old back issues, the more the hits just kept on coming. We paired them with a selection of some of our best Winternationals photos to present a thick, 26-page guide to the history of this special event that you have to see to really enjoy. The magazine-style layout really brings it home with huge photos and an artistic layout, but I thought the Insider Nationals might also enjoy seeing which moments made the list,

I'm also sitting on a treasure trove of swell video from the 60 years of the Winternationals, which we'll roll out on NHRA.com in the days leading up to the event. In the meantime, here's great moments from the history of the Winternationals from the 1960s and '70s. I'll follow up with the '80s and '90s next week and 2000s and 2010s the week after. Enjoy!

Jack Chrisman drove the Howard Cams’ twin Chevy-powered “Twin Bears” AA/Dragster to the first Top Eliminator win at the Winternationals. With a makeshift plywood airfoil on the front of the car, Chrisman defeated Tom McEwen for top honors. 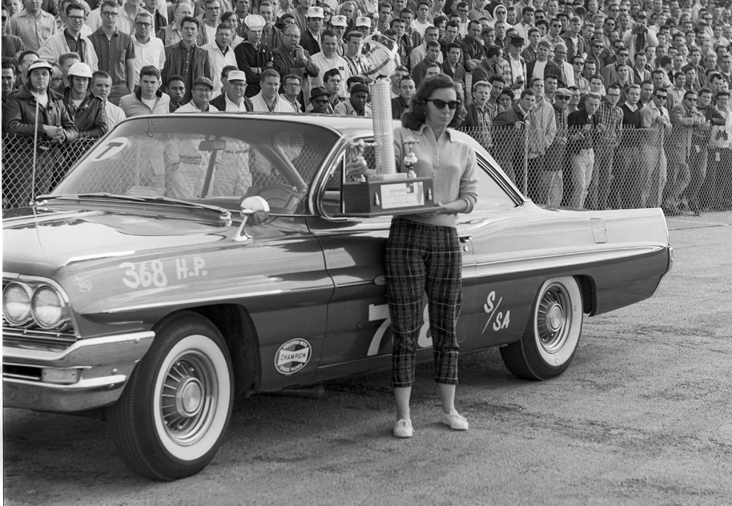 Carol Cox, a Whittier, Calif., homemaker became is the first woman to ever win a trophy of any kind at an NHRA national event, winning the S/SA class crown in husband Lloyd’s ’61 Pontiac. 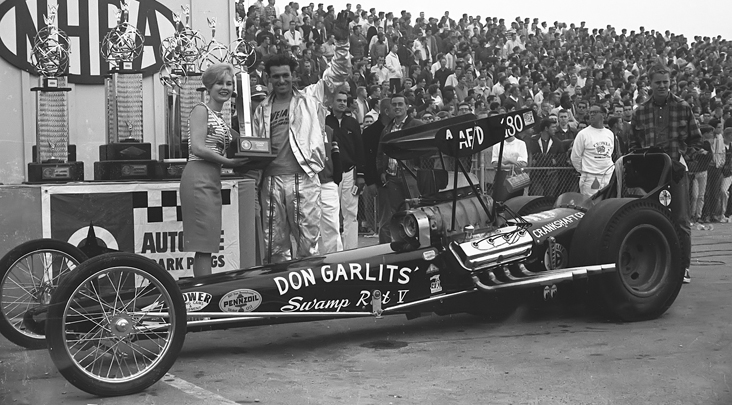 Although NHRA’s six-year “Nitro Ban” was technically still being enforced, Top Fuel made its debut at the Winternationals, where “Big Daddy” Don Garlits drove his winged Swamp Rat 5 to the first nitro title in NHRA history. In the final, Garlits defeated Art Malone with an 8.26 and 186.32 mph.

John Peters was initially listed as the Top Gas winner after beating Connie Kalitta’s Bounty Hunter, but Peters was merely the car owner of the famed twin-engine Freight Train dragster that was actually driven by Bob Muravez, who used Peters’ name on the entry form because he didn’t want his parents to know he was racing. Later, Muravez adopted the alias Floyd Lippencott Jr. and continued to race.

READ MORE ABOUT THE FREIGHT TRAIN: Engineering the Train

Jack Williams’ 1964 Top Fuel was a testimony to perseverance. After blowing the engine in winning AA/FD class honors Saturday, the team made the treacherous 140-mile trip home over the notorious Grapevine on the old Ridge Route that predated Interstate 5. After repairing the engine overnight, they needed a police escort through a snow-closed highway to get back to the track in time to compete Sunday.

READ MORE ABOUT HIS WILD TRIP: Neither wind, nor snow … 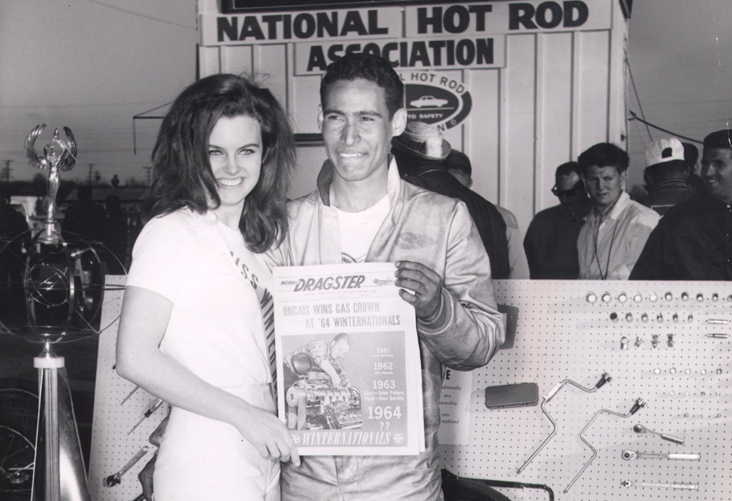 Danny Ongais, who would go on to great fame in IndyCar racing, scored his first major victory on the NHRA circuit when he drove Roland Leong’s dragster to the Top Gas title, defeating the legendary Mickey Thompson in the final. Ironically, Ongais went on to win two Funny Car event titles in 1969 while driving for Thompson.

Don “the Snake” Prudhomme collected his first NHRA event win and his first of five at the Winternationals, driving Roland Leong’s Hawaiian Top Fueler to victory. The duo used the Pomona win as a springboard to tour back East and also won that year’s U.S. Nationals then repeated that dual feat in 1966 with driver Mike Snively.

READ MORE ON THIS TOPIC: Prudhomme, Leong, and the spirit of '65

The 1965 event is known as the “one-day wonder” — heavy fog Friday and rain Saturday forced the event to be run entirely Sunday. Class eliminations, qualifying, and competition in seven eliminators were squeezed into a 10-hour window. A total of 3,168 runs were recorded.

READ MORE ABOUT THIS RACE: The one-day wonder 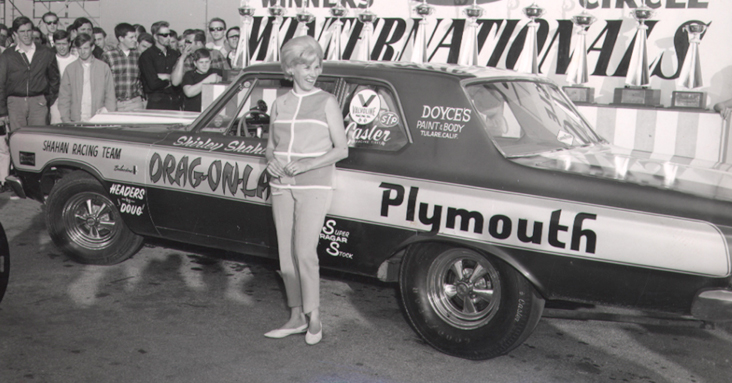 After three years of development, Ford’s 427-cid SOHC Hemi for Top Fuel finally scored a victory beneath the talented foot of Connie Kalitta, who saw his efforts pay off big time with a dominating win. The Fords had produced race-winning horsepower from the beginning but lacked the strength to survive five rounds of grueling eliminations in the 32-car fields. Kalitta drove his Bounty Hunter entry a final-round 7.17, low e.t. of the meet, to defeat Gene Goleman.

Ford crashed Mopar’s Stocker monopoly with a fleet of 10 Cobra Jet Mustangs, and Al Joniec, at the wheel of the Rice-Holman entry, collected the victory. Uniform in appearance and equipped with Ford’s new 428-cid Cobra Jet engine, the eight SS/E entries were driven by a who’s who of the era’s top drivers, including “Dyno Don” Nicholson, Gas Ronda, Hubert Platt, Jerry Harvey, Carl Holbrook, Bill Ireland, and Phil Bonner. Joniec beat Platt for class honors and then defeated Dave Wren’s Mopar in the Super Stock final 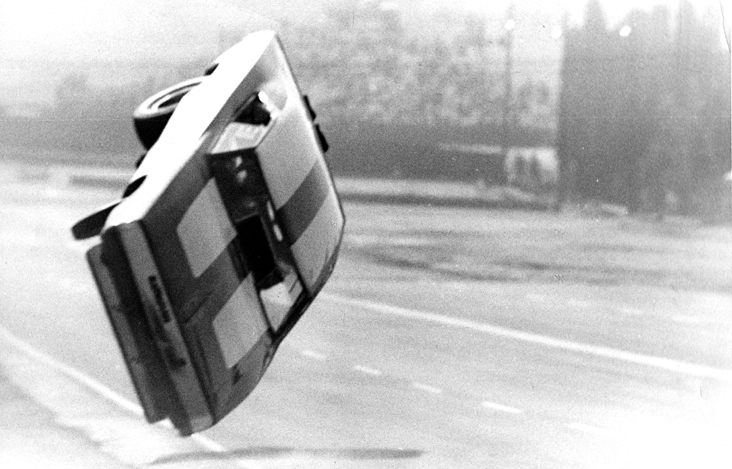 Roland Leong’s first Hawaiian Funny Car, an ill-handling, full-size Dodge Charger driven by Larry Reyes, took flight and sailed backward through the finish-line lights in round one. Reyes was not hurt and the duo won the race the following year, and Leong added another win in 1971 with driver Butch Maas.

LEARN MORE ABOUT LARRY REYES: Larry Reyes: The flyin' Hawaiian and other stories 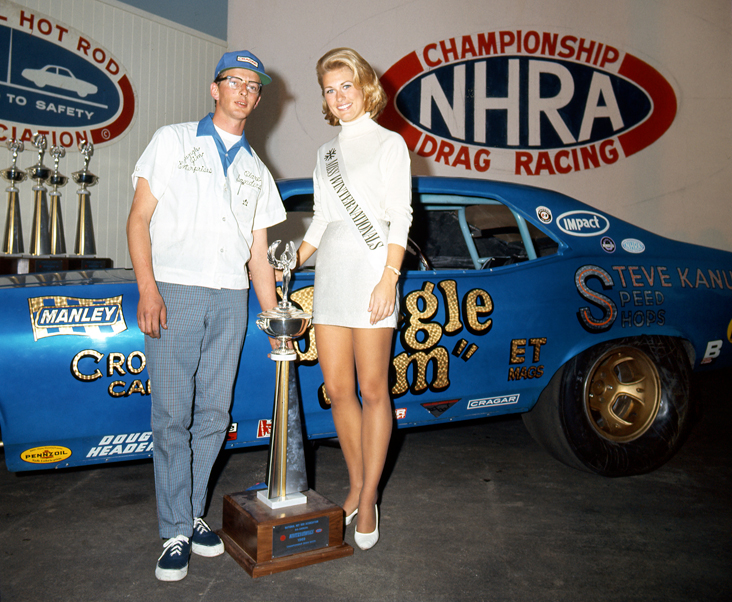 Popular “Jingle Jim” Liberman got his first win, but as a team owner in a second car driven by Clare Sanders, who won the inaugural Winternationals Funny Car title, which was followed by a Rodney Dangerfield-ish “I don’t get no respect” moment with ABC’s Wide World of Sports’ Keith Jackson. Recalled Sanders, “Keith walked up to me and said, ‘Congratulations Jim Liberman on winning the Winternationals.’ People were used to just seeing one ‘Jungle’ car, and I was relatively unknown at the time, so I understand why he was confused.”

The Pomona track was christened as Parker Avenue, in tribute to Pomona Police Chief Ralph Parker, who for years had been instrumental in working with the NHRA to turn a portion of the L.A. County Fairgrounds into a once-yearly racetrack that became known as fabled Pomona Raceway.

A year after a near-career-ending accident, Don Garlits won Top Fuel with a revolutionary rear-engine dragster in its NHRA national event debut, proving that the supposedly unworkable design was not only safer but also competitive. Within two years, front-engines cars were almost extinct.

READ MORE ABOUT THIS CAR: The rear-engine transition 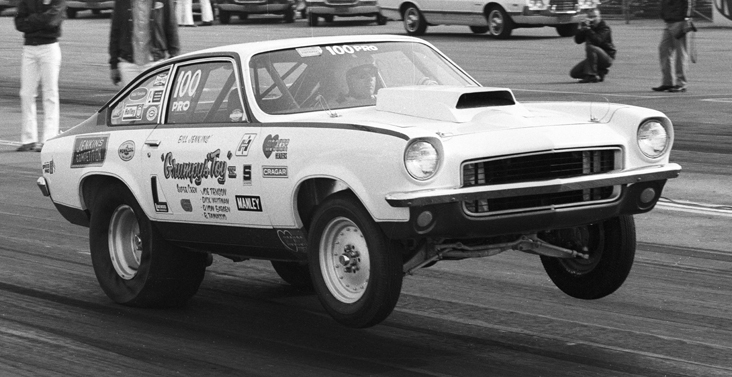 Concerned that the overwhelming success of the Chrysler Hemi cars during the class’ first two years could hurt the class, NHRA implemented separate weight breaks for small- and big-block entries for 1972. Taking advantage of new rules, Bill “Grumpy” Jenkins drove his new small-block Chevy-powered Vega to a stunning victory.

After blowing the engine and coating the slicks with oil, “TV Tommy” Ivo barrel-rolled his beautiful Top Fuel dragster in the finish-line lights during qualifying in a fiery, car-destroying crash.

Don Garlits smoked the tires against Don Ewald in round one of Top Fuel, but Ewald was disqualified for crossing the centerline. Garlits won the event and admitted that had he not won the Winternationals he likely would not have pursued the world championship that he ultimately won.

READ MORE ABOUT THIS MOMENT: The one that got away 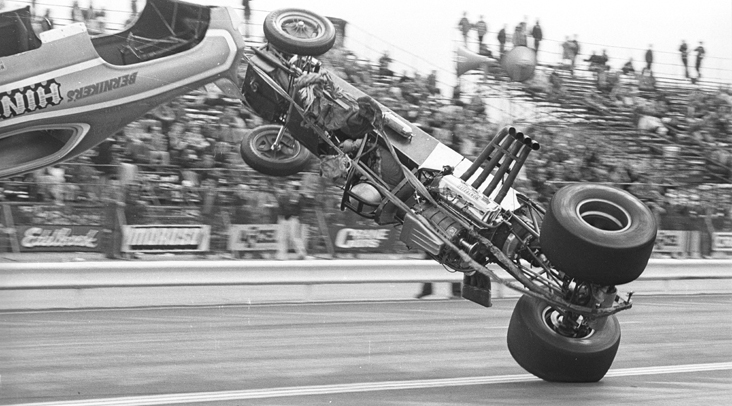 Dennis Geisler backflipped Burt Berniker’s wild rear-engined Hindsight Duster just off the starting during Funny Car qualifying. The car body was ripped from the chassis, which then tumbled downtrack before coming to a stop against the guardrail. Geiser, a former fuel altered pilot, was not injured.

LEARN MORE ABOUT THIS WILD CAR: In Hindsight, maybe not such a great idea

After another NHRA Pro Stock rules change that provided a favorable weight break to longer wheelbase cars, Bob Glidden traded in his successful but short-wheelbase Pinto for a retro-looking ’70 Mustang and won the event while resetting the national record. Glidden defeated Wayne Gapp’s similarly long-wheelbased four-door Maverick in the final. 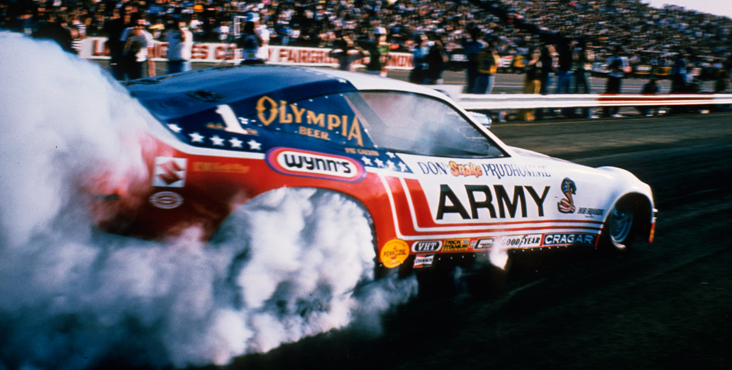 Don Prudhomme kicked off one of the greatest seasons in history with his second of four straight Winternationals titles. Prudhomme’s win in his Army-sponsored Monza kicked off a season in which he won seven of the eight events on the calendar. The victory also was the 15th of his career and tied him with Pro Stock’s Ronnie Sox as the winningest driver in NHRA history.

Southern California is supposed to be home to sunshine and blue skies, but the 1978 event was besieged by foul weather. After the first weekend was lost to rain, only one round of racing was completed the second Sunday before rain forced action to Monday, when another round went in the books before the day was lost to more weather, including a rare dusting of snow that coated the starting line.

READ MORE ABOUT THIS RACE: Reliving a previous wet and waylaid Winternationals