As we close in on the launch of the 2020 season and the 60th annual Lucas Oil Winternationals, we continue our look back at the rich history of the event. In Part 2, we're focusing on the 1980s and '90s.
31 Jan 2020
Phil Burgess, NHRA National Dragster Editor
DRAGSTER Insider

As we close in on the launch of the 2020 season and the 60th annual Lucas Oil Winternationals, we continue our look back at the rich history of the event. Last week we revisted great Winternationals moments from the 1960s and '70s, and this time we're focusing on the 1980s and '90s.

Shirley Muldowney beat her former teammate and mentor, Connie Kalitta, in the Top Fuel final. Muldowney, who would win the second of her three NHRA world championships that season, used a 5.94 in the final to stun Kalitta, who was appearing in his first Pomona final since winning the event in 1967.

The roof of Raymond Beadle’s famed Blue Max Funny Car blew off at the finish line on a winning semifinal run, and fellow Texan Kenny Bernstein allowed Beadle to saw the roof off of his Budweiser King entry and graft it to the Max for the final round. Beadle lost the final to Billy Meyer but not for lack of effort

NHRA Pro Stock adopted the still-in-use 500-cubic-inch engine rule at this event. In the first qualifying session, Lee Shepherd posted the first seven-second elapsed time with a 7.86 in the Reher-Morrison Shepherd Camaro, every driver in the 16-car field qualified with an e.t. quicker than the existing national record of 8.23. Frank Iaconio, who reset the national record to 7.82, registered a historic victory when he defeated Shepherd in the final.

Shedding their reputation as match racers, crew chief/owner Austin Coil and driver Frank Hawley turned the Chi-Town Hustler in a championship force. They qualified No. 1 at the 1982 event and then won the 1983 event en route to winning championships both years in 1982 and 1983.

Al Segrini won dramatic back-to-back Funny Car titles. In 1984, he rode out a huge top-end blower explosion in his Faberge Trans Am; the following year, he crossed the finish line with a cockpit full of sparks from a disintegrating clutch in Joe Pisano’s Dodge

Gary Ormsby unveiled his super-swoopy and innovative Castrol GTX streamliner, and the car’s debut was a bang ... in the worst way. An ignition short caused by the engine-cloaking body led to a huge blower explosion in the water box on its first pass. The team ran the rest of the event sans the bodywork.

Other than Bob Glidden, no other Ford Pro Stock driver could reach the winner’s circle under the 500-inch rules until longtime Chevy campaigner Frank Iaconio drove his Budweiser Thunderbird to a final-round victory against Warren Johnson. 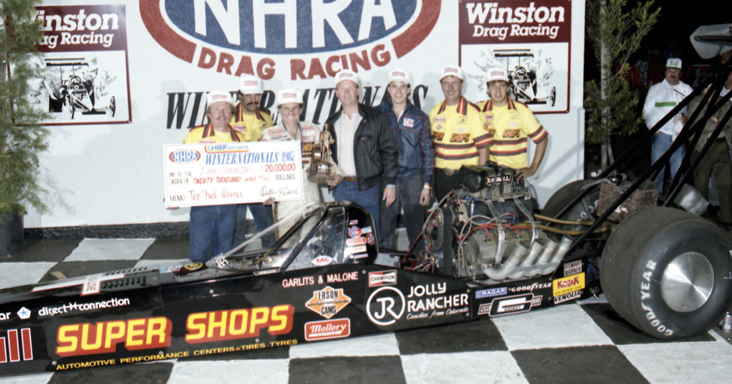 They obviously had no way of knowing it, but the fans who streamed through the gates for the final day of the 1987 Winternationals will forever be able to say that they had the thrill of watching “Big Daddy” Don Garlits win what would be the 35th and final Top Fuel title of his illustrious driving career. Garlits scored a dominating 5.29 to 5.41 final-round win against Joe Amato.

While U.S. sailors battled the Australians in the America’s Cup sailing regatta, American Kenny Bernstein and Aussie Graeme Cowin waged their own war in Funny Car — complete with their countries’ flags flying on their tow vehicles. Bernstein, driving his controversial “Batmobile” Buick, won for the Yanks, defeating fireballing Cowin in the final.

Eddie “the Thrill” Hill lived up to his nickname after a front-spoiler malfunction sent his yellow Pennzoil Top Fuel dragster soaring across the finish line during qualifying in a wild blowover wheelstand. The car was destroyed and an unscathed Hill borrowed a car from Darrell Gwynn to continue competing at the event. 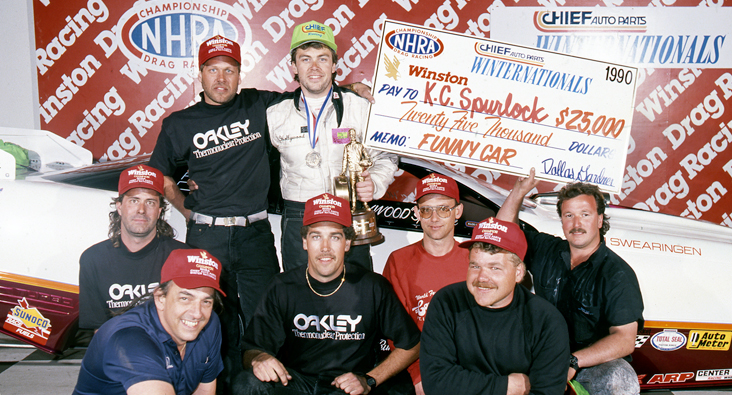 Kenny Bernstein lost more than the Top Fuel final to Joe Amato. A blown engine led to a blown rear tire that sent the car out of control and over the guardwall in the shutdown area. “The Bud King” was dazed but unhurt.

There was no more fierce rivalry in the mid-1990s than John Force and Al Hofmann in Funny Car. The duo, who finished No. 1 and 2, respectively, in the championship standings in 1995, squared off in the final of the 1996 season opener. Hofmann was still trying to recover from a collision with on-fire Mark Sievers in round one and Force was a thousandth of a second from a perfect light in the final round, but it didn’t matter after Force lost traction. The dramatics from the racetrack spilled into the pressroom when a remark by Hofmann got under Force’s skin and the two traded barbs.

Gary Scelzi won at his first event since taking the wheel of Alan Johnson’s dragster five months after the death of Alan’s brother, Blaine. He became the first driver since K.C. Spurlock in 1990 to win in his Pro debut. The Top Fuel rookie qualified No. 1 and displayed driving skills Sunday by saving wheelstand and tire-smoking passes en route to beating Joe Amato in the final.

Don “the Snake” Prudhomme ended a 20-year Winternationals drought when his drivers, Larry Dixon and Ron Capps, doubled in Top Fuel and Funny Car, respectively. Prudhomme hadn’t won as a driver or owner at the Winternationals since he drove to victory in 1978.