30 years ago: The 1992 NHRA season was a year full of historic firsts

The 1992 season as a whole was filled with big news, history-making moments, and craziness, so we thought we'd take a 30-year hop back in time to remember that amazing season.
15 Apr 2022
Phil Burgess, NHRA National Dragster Editor
DRAGSTER Insider

For the last week or so, we’ve been saluting the history of Houston Raceway Park on NHRA.com, having created a list of 10 memorable moments from the past 33 years, some of which read like mini Dragster Insider columns. On Tuesday, I wrote about the 1992 event, but the 1992 season as a whole was filled with big news, history-making moments, and craziness, so I thought I’d take a 30-year hop back in time to remember that season. 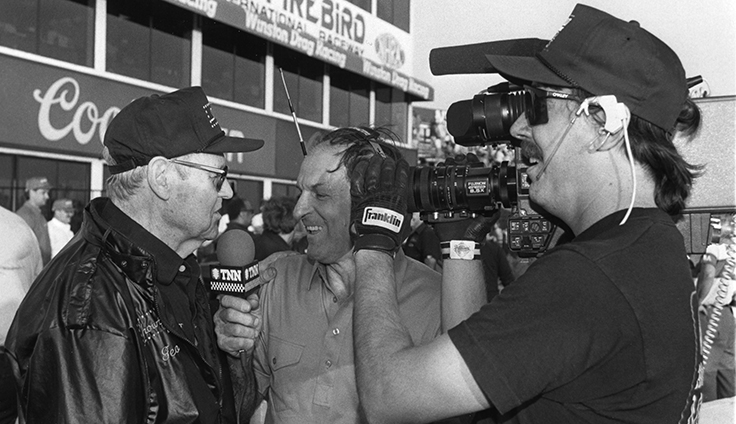 In a game-changing moment, The Nashville Network (TNN) aired live coverage of the Professional final rounds at the Motorcraft-Ford Nationals from Firebird Int'l Raceway in Chandler, Ariz. The half-hour live telecast was a special presentation of the weekly American Sports Cavalcade and was the first of six such telecasts of NHRA Winston Drag Racing scheduled by TNN this season. NHRA announcer Steve Evans, legendary drag racer "Big Daddy" Don Garlits, and race analyst Brock Yates called the action. 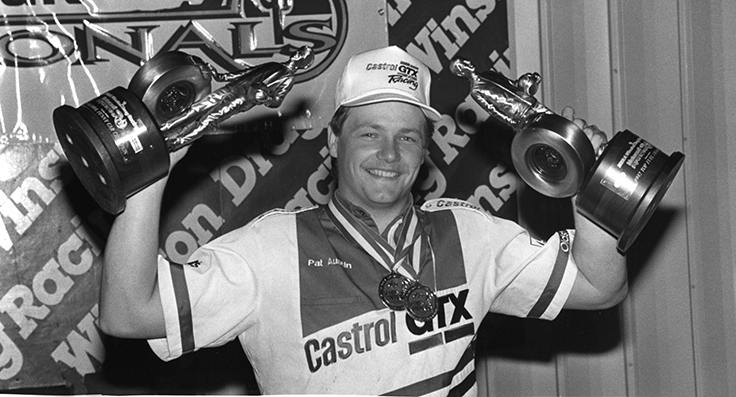 Just a few months after making history at the 1991 Topeka event as the first driver to win in two classes (Top Fuel and Top Alcohol Funny Car) at the same national event, Pat Austin duplicated the feat at the 1992 Phoenix event in the same classes. Later that year, Austin became just the second driver — behind Bob Glidden — to reach the 50-wins milestone with his Alcohol Funny Car win in Topeka. As of today, 21 drivers have scored 50 or more wins.

Edmond Richardson, who sits one win shy of 50 victories, became just the second driver (behind Austin) to double up at a national event and the first to win two carbureted-class trophies on the same day when he won Super Comp and Super Street at the Southern Nationals. Richardson accomplished the incredible “double-up” feat four more times between 1992 and 1999, and his five doubles are the most by any racer.

At the NHRA Mid-South Nationals in May, Lucinda McFarlin made Pro Stock history as the first female to win an eliminations round. McFarlin defeated Southern Nationals winner Don Beverley.

Kenji Okazaki became the first Japanese national to race in NHRA national event competition when he drove Jim Dunn's entry at the U.S. Nationals. He failed to qualify for the race, but two races later made more history as the first Japanese racer to win a round of racing. A year later, Okazaki was the U.S. Nationals runner-up behind John Force in Indy, was runner-up at the Big Bud Shootout in Indy in 1994, and won the Shootout in 1997. 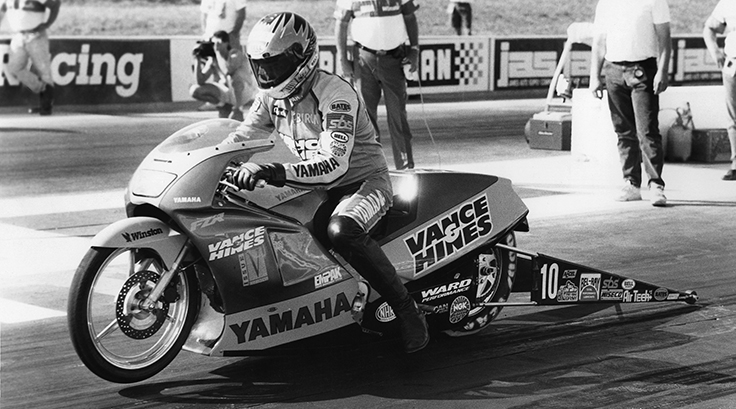 Motorcycle legend Bryon Hines — father of future world champions Matt and Andrew — won his first and only Pro stock Motorcycle race as a rider in Topeka and became the first (and still only) rider to win aboard a Yamaha.

If you go to enough drag races, you’ll hear NHRA announcer Alan Reinhart harked back to what we insiders like to refer to simply as “Phoenix ’92,” because, in addition to the whole live TV thing and Austin’s double, a whole lotta other weirdness took place there. Reinhart wrote a whole column about it for us at NHRA National Dragster — it was his first for us, that he continues to this day — that I’ve reprinted here. 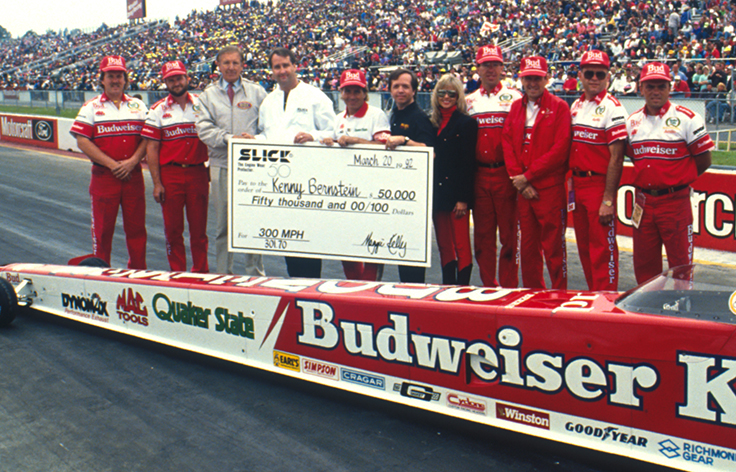 With the first 300-mph run on the horizon, Slick 50 announced a bonus program to salute the first 16 drivers to exceed 300 mph. Kenny Bernstein became the first member of the Slick 50 300-MPH Club on March 20 of that year with his barrier-breaking 301.70-mph pass in Gainesville, and it took less than two years to fill all 16 spots, with Australian Rachelle Splatt sealing the club on March 5, 1994, in Houston with a 300.00-mph pass. 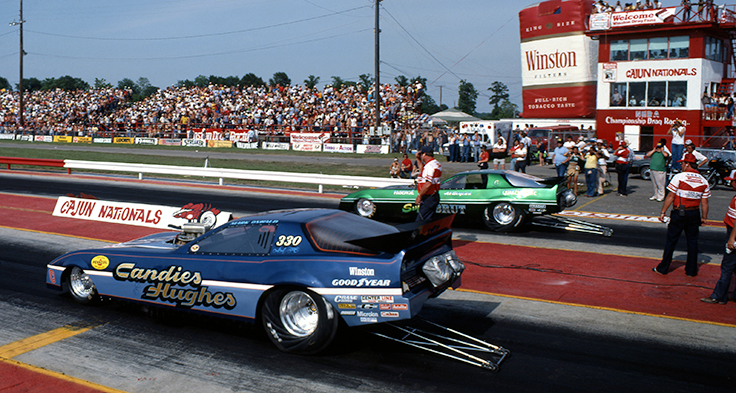 Even though NHRA had ceased running the Cajun Nationals there two years earlier, in April, NHRA purchased State Capitol Dragway outside of Baton Rouge, La., to keep racing strong in the area.

Randy Anderson replaced his famous father, three-time world champ Brad, in the seat of the family's Alcohol Funny Car while sister Shelly, fresh off an Alcohol Dragster win at the Southern Nationals, announced her move to Top Fuel for 1993.

In May, NHRA announced the development of a youth racing program that was later named the Jr. Drag Racing League. Two months later, the program debuted at the Summernationals, at Old Bridge Township Raceway Park, whose owner, Vinny Napp, is considered the father of the Jr. Dragster class; he built the first small-scale digger for one of his sons. 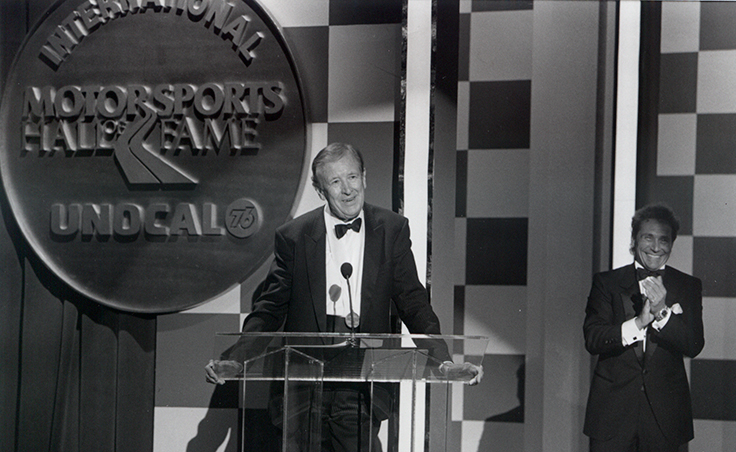 NHRA Founder Wally Parks was inducted into the International Motorsports Hall of Fame in June.

In July, NHRA announced a random drug-testing policy, with the first on-site testing taking place at the Keystone Nationals in September. 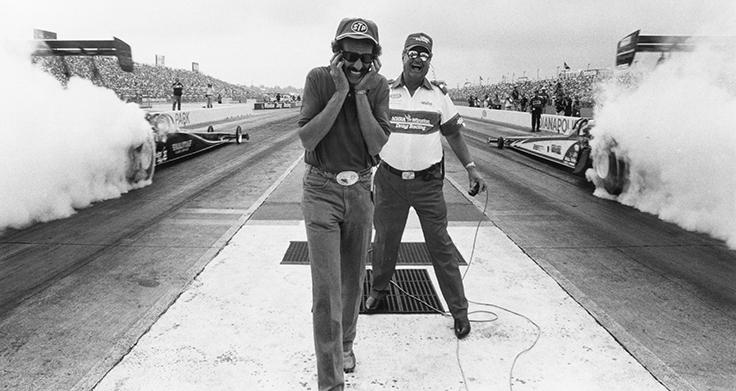 NASCAR legend Richard Petty served as grand marshal of the U.S. Nationals and got to stand between a pair of Top Fuelers, much to the delight of Chief Starter Buster Couch.

The new Pomona Raceway was nearing completion and tower suites were already sold out in anticipation of its opening for the 1993 Winternationals. 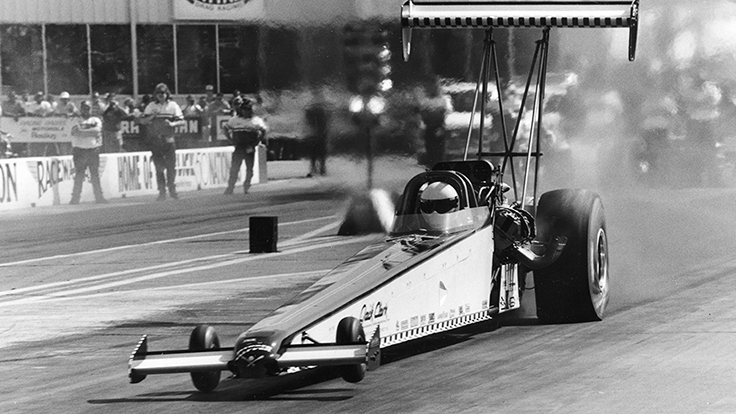 Baseball slugger Jack Clark replaced Tom McEwen with Mike Dunn in the seat of his Top Fueler following the Winternationals. A few weeks later, Dunn and crew chief Larry Meyer ran 297 mph at the Houston event, setting the stage for Kenny Bernstein’s 300-mph pass at the Gatornationals. To read more about the race to 300 mph, check out this Insider column I wrote a few years ago.

Top Fuel racer Jimmy Nix experienced the second blowover of his career while qualifying for the Winternationals. He was not injured.

In April, Don Garlits returned to action with his single-strut Top Fueler but failed to make the Southern Nationals show. A month later, Garlits announced his Top Fuel retirement (again) due to detached retinas in both eyes that he blamed on a two-parachute stop. Bruce Larson took over the driving for him.

Michael Brotherton scored a fairy-tale Top Fuel win in August at the Seattle event after banging up the Darrel Gwynn/Coors Light entry on its final qualifying run at Northwest Nationals. The team repaired the car overnight and beat Eddie Hill in the final round. 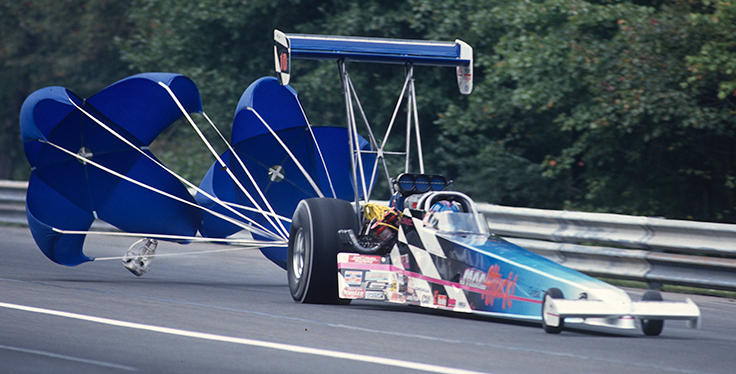 Despite winning the season-ending NHRA Finals, fan favorite Cory McClenathan fell 92 points short of the championship that went to Joe Amato. McClenathan had elected to skip Le Grandnational in June for financial reasons, and the points he would have gained for merely rolling to the starting line for one qualifying attempt would have been enough to give him the championship. Cory Mac's crew chief that year? Some young kid named Jimmy Prock.

Amato won the championship despite splitting with longtime crew chief Tim Richards prior to the Keystone Nationals.

Dannielle DePorter, who finished 10th in the Top Fuel standings, was named NHRA Rookie of the Year.

Jim Epler opened the season by scoring his first Funny Car win at the Winternationals. He’d win three more events in his career, including the 2000 U.S. Nationals, and also made history as the first Funny Car driver to exceed 300 mph in Topeka in 1993. 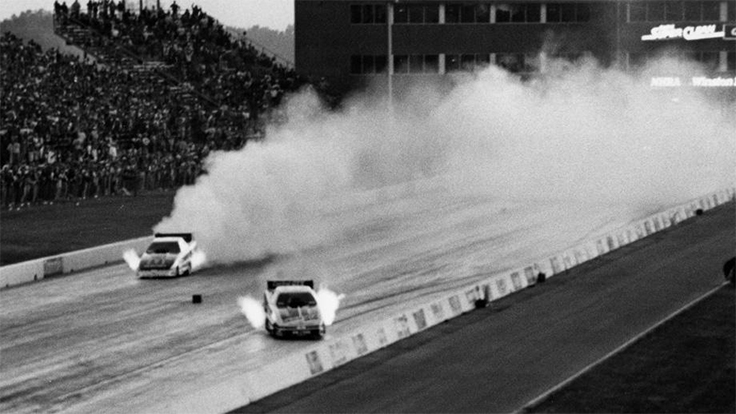 Cruz Pedregon won six times en route to his first Funny Car world championship thanks to a record-tying five straight late-season victories, including his dramatic encounter with John Force in the final round of the Chief Nationals in Dallas.

Mark Oswald recorded a 293.06 in the In-N-Out Burger Daytona at the Chief Nationals, the best Funny Car speed of all time. 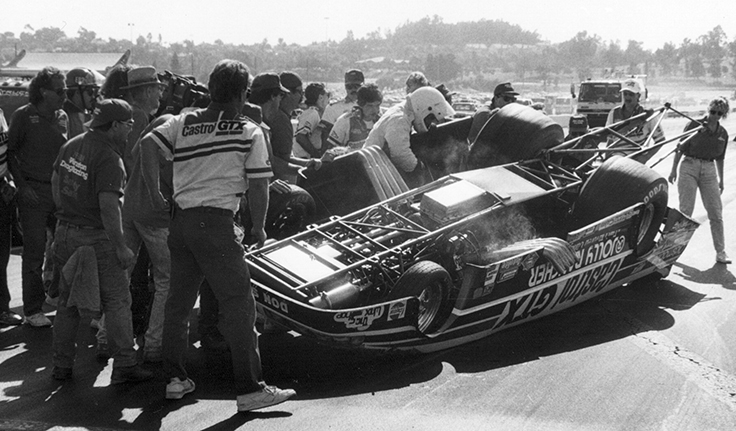 While trying to stop Pedregon from winning the Winston championship, Force's car went on its roof and slid the length of the track in qualifying at the Finals, where the champ climbed out and saluted the crowd from the top of the car. Despite a star-crossed early season, Pedregon held on to win the Funny Car championship.

At the Slick 50 Nationals in March, Mark Pawuk won his first Pro Stock title. Pawuk defeated Rickie Smith in a battle of perennial bridesmaids. Prior to the final, Pawuk had lost eight final rounds – three in Super gas and five in Pro Stock – while Smith had lost three straight Pro Stock finals. Pawuk would go on to win five more national vents in Pro Stock, and Smith would win a pair before moving to Pro Mod, where he now owns 17 wins.

Larry Morgan won his third Pro Stock Challenge, defeating Allen in the final round of the event, which was held during the Englishtown event.

Rusty Glidden, son of class icon Bob, made his Pro Stock debut in his father's second Probe at the Mile-High Nationals.

David Rampy announced his plan to move to Pro Stock in 1993. 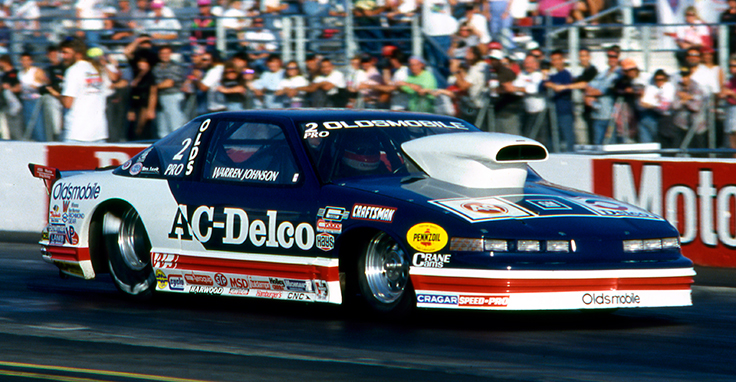 Warren Johnson won eight of the 18 events to claim the championship, his first of six over the next 10 seasons, finishing ahead of Geoffrion, Jerry Eckman, and Beverley. Bob Glidden, just three years removed from his latest championship, finished fifth for the second straight year; after 10 world championships, he would not finish higher than fifth for the remainder of his career.

Wow, so that’s a lot that happened. Some of it is hard to believe that it’s been 30 years ago, and some is still very fresh in my mind. I wonder what we’ll all be talking about 30 years from now …