From Tokyo, with love: The story of how Kenji Okazaki made NHRA history 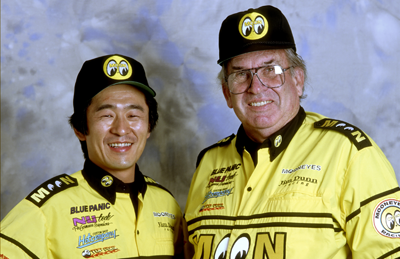 Kenji Okazaki is probably the least likely guy to become a Funny Car hero, but in just five years wheeling Jim Dunn’s Mooneyes Funny Car, the vintage muscle-car salesman from Tokyo overcame an ocean-wide lack of experience and a challenging language barrier to make NHRA history and establish himself as a memorable favorite of both fans and fellow drivers alike.

As we continue to look back at NHRA history in this 70th-anniversary season, I got a chance to catch up with Okazaki on a recent long-distance (and expensive!) call to Japan. Okazaki will be forever remembered as the first non-North American to win an NHRA national event, scoring in Funny Car at the 1997 Englishtown race, but let’s not forget they also almost won the NHRA U.S. Nationals their first season together, later won the Big Bud Shootout, and finished in the Top 10 four times.

It’s an improbable story of the teaming of two guys — Okazaki and Dunn — who probably couldn’t be more different yet united into a successful team whose pleasant memory still lingers in the minds of fans.

The genesis for the unlikely pairing was the result of the NHRA-led USA Drag Festival exhibitions in Japan in the late 1980s and early 1990s. Dunn was one of the drivers tapped by NHRA to participate, and Okazaki was an aspiring drag racer with a modified ‘68 Barracuda and dreams of Funny Car racing. Okazaki ended up making a trip to the United States and bought one of Dunn’s cars to run on alcohol in Japan. 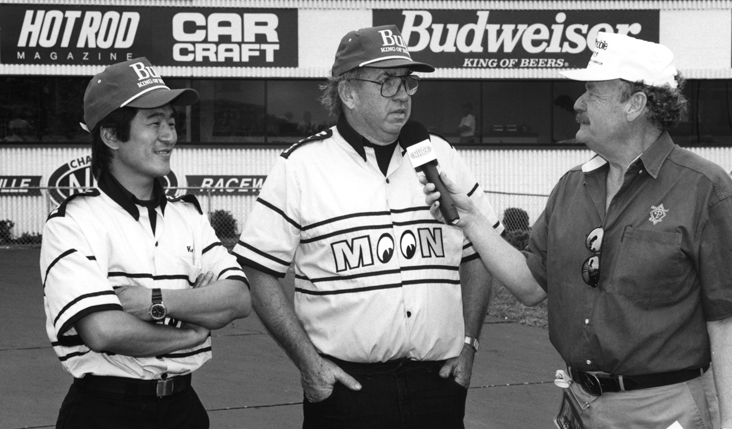 “I was just a beginner and built the motor myself, had to buy all the pieces, and put it together,” Okazaki remembers. “I think it ran in the sevens, not on a dragstrip, but on the straightaway on a road course, but I wanted to go faster.

“I would visit the U.S. three or four times a year to buy muscle cars and parts, and always would stop at Keith Black’s shop, where the Dunns kept their car. He was trying to find a sponsor, and I wanted to step up to race nitro.”

At the time, Dunn had just finished a successful partnership with his son, Mike, driving a car owned by businessman Ed Abel and sponsored by Snickers candy bars that had yielded a handful of wins over two years, so Dunn obviously had a good combination in hand.

The owners of Moon Equipment had recently passed away and the new owner, Shige Suganuma, who had run the company’s Japan division and had attended college in the United States and even watched Funny Cars at Orange County Int’l Raceway, wanted to get the company back into drag racing, where it had a history dating back to the 1950s.

Okazaki was a natural fit and made the deal happen and by the summer of 1992 was trying to get his license in Dunn’s car in Bakersfield.

“I had a hard time,” Okazaki admitted. “The monster scared me when the engine started. I never felt a motor like that. As soon as I touched the throttle, I thought, ‘This is not a car, it’s something else.’

Despite those issues, Dunn told me that he thought Okazaki “was pretty good right away, probably the best leaver I ever had; the best concentration for sure. He was a black belt in Kendo. He would tell me, ‘If you’re slow, you’re hurt.’ “

(Okazaki confirmed Dunn’s tale and added that he  trained in the martial art of bamboo swords and worked hard to train his eyes and muscles and between seasons would get on a train or bus and count telephone poles, fences, and even railroad ties to improve his concentration.)

The team made its debut at the 1992 U.S. Nationals, making Okazaki the first Japanese racer to compete on the NHRA stage, but they failed to qualify. Two races later, at the Sears Craftsman Nationals in Topeka, Okazaki made history with a first round win then reached the semifinals after victories over Norm Wilding and Mark Oswald before falling to John Force in the semifinals. They also won a round at the season-ending Winston Finals to conclude a pretty decent debut.

Their 1993 season was especially memorable for two reasons: a huge fire in Houston and a runner-up at the U.S. Nationals.

During a qualifying pass, the Mooneyes Dodge erupted into flames. I was positioned with my trusty Nikon in the shutdown area and shot the photo above and watched in horror as the car and the fire seemed to go on forever. I had no idea what was playing out inside the inferno.

“I thought I was going to die,” Okazaki told me. 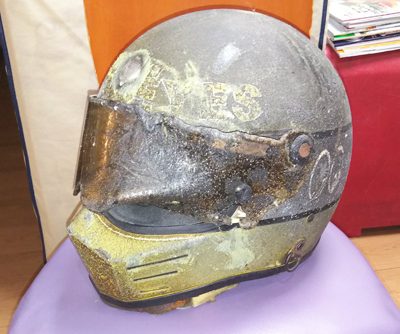 “I didn’t have enough experience to feel it nose over or anything, but it kicked a rod out and put a window in the block, and pieces of the rod broke through the firewall. The fire was shooting right through the hole and onto my face.

“I forgot to pull the parachutes until it was too late and the chutes burned off and the car wouldn’t stop and just coasted on and on until the right-side tire blew. I was trying to correct it, then the left tire blew and the car spun around and stopped. Dunn told me, ‘Welcome to the Funny Car world,’ and not to worry about it.” 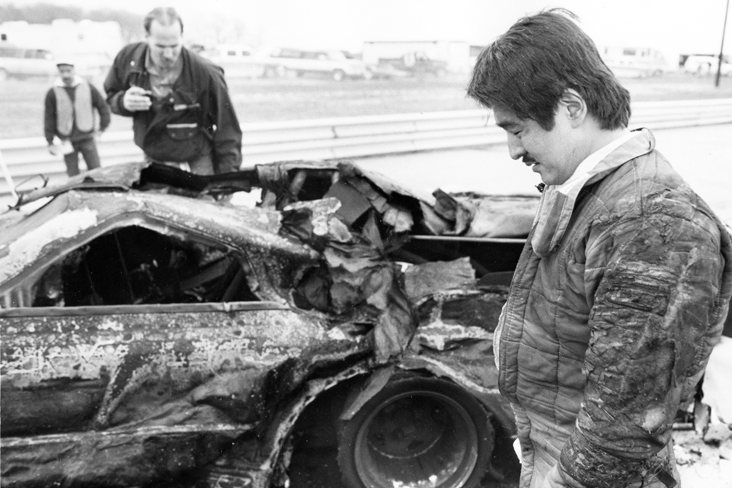 The team skipped the Gatornationals to regroup and quickly found their stride again heading into the U.S. Nationals, where they qualified just 14th, giving no hint of the weekend ahead.

On Monday, Okazaki beat Cruz Pedregon, Chuck Etchells, and Jim Epler to reach his first final round at the biggest event of the year, just one year after failing to qualify there in his debut. Okazaki barely fended off Epler as the blower belt exited the Mooneyes car in the traps. What they didn’t know was that the flailing belt had knocked loose the semi-hidden fuel pressure line where it connected to the data recorder. When the team fired the engine to face Force for the biggest round of Okazaki’s life, they had to be shut off in the water box as fuel gushed onto the ground. Okazaki had to watch Force single for the win. 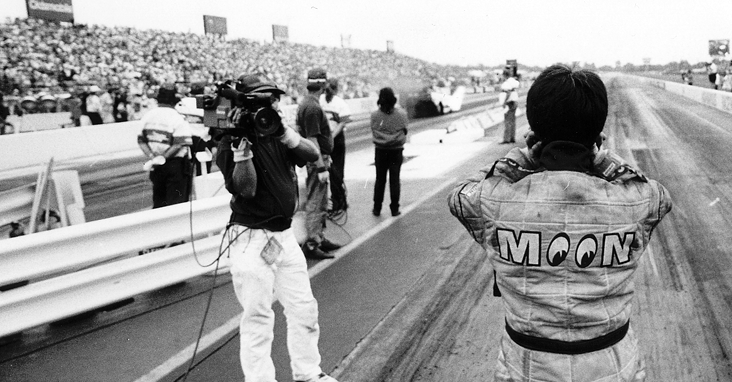 “We didn’t notice it when we serviced the motor for the final round,” said Okazaki. “The time was running out, and we didn’t have time to warm up before the final. If we did, of course, we would have noticed it and fixed it. One of the officials saw it and told Jim to stop the engine, game’s over.

“Mike Dunn told me I was lucky, that if it had been him driving, his dad would have just pinched the line with a pair of vise grips and sent him down the track. Jim just thought I was too young to deal with that, that it was too dangerous for me.

“I was a little disappointed, but I thought, ‘There’s always next time,' and maybe it was too soon [in my career] to beat John Force in Indy. I always thought there would be another chance.” 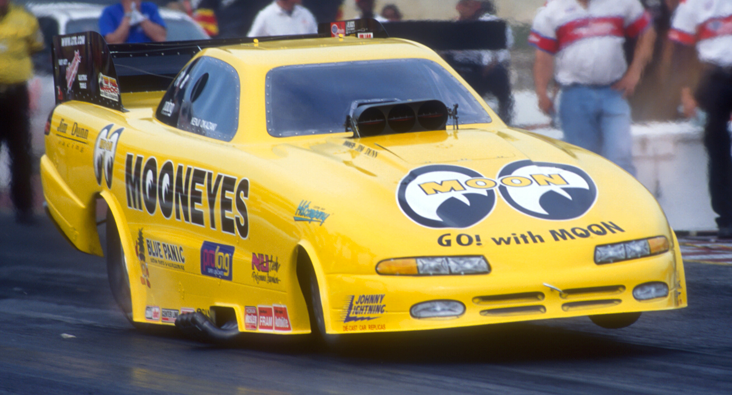 “I told Jim and Shige that I was done, I was going home,” he remembers. “It was a tough time, but I was ready to quit. I wanted to win a race but hadn’t. I thought enough was enough, I had done everything I could.

“We were in Pomona for the World Finals, and Jim and Shige told me if we won first round I would race one more year. Deal? I said, ‘OK, deal,’ and we won the first round.”

By virtue of a 5.19 to 5.55 loss, Dean Skuza thus became the answer to the trivia question “Who could have prevented Kenji Okazaki from making NHRA history?”

The following summer in Englishtown, Okazaki eliminated the then-hottest driver in Funny Car, Randy Anderson, who had run 312 mph on his previous pass, in round one. He handled national-record holder Whit Bazemore, hot off a first-round 4.97, in round two and downed rookie Ron Capps in the semifinals with one of the best runs of his career, 5.01.

Etchells had edged Force in the race of the event in the other semifinal match, 4.95 to 4.99, and rated a huge edge going into the final, but he was up in smoke before he ever got going, and Okazaki was home free. Even a thrown blower belt that slowed him to a 5.68 couldn't keep Okazaki from crossing the finish line first and claiming another spot in history as the first non-North American to win an NHRA Pro title. Only a few have followed him: Khalid alBalooshi (UAE), David Grubnic and Richie Crampton (Australia) in Top Fuel, and Jimmy Alund (Sweden) in Pro Stock.

A few months later, the Dunn Mooneyes team won the Big Bud Shootout, collecting a $100,000 payout, a jackpot that had eluded them in 1994 when they were runner-up to future Dunn driver Al Hofmann.

“Dunn made the strategy when we won the first round; he pulled out that motor to save it for the final round,” recalled Okazaki. “We put in a different motor and went to second round then beat Tony Pedregon in the final with an awesome pass. 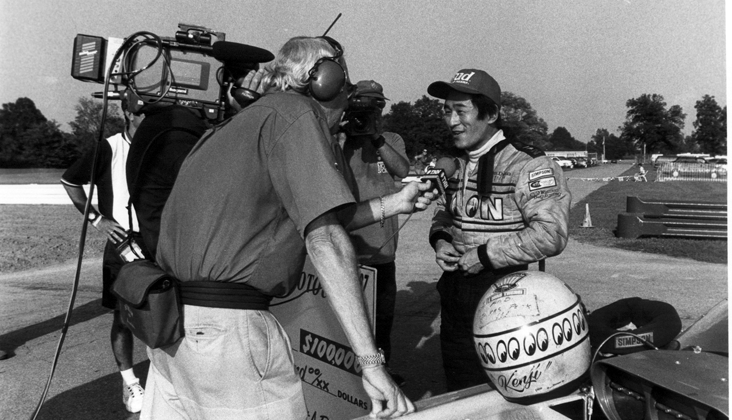 “The car left so quick, and the car was going on and on and speeding up to the finish line. I talked to Tony, and he told me he shut off because he knew he couldn’t catch me. That was a good day.”

After his NHRA career ended, Okazaki became a television commentator for Japanese television coverage of NASCAR, Indycar, and Pike’s Peak.

“I learned a lot of different things about how to ask and answer questions and understand what drivers and crew chiefs were saying,” he said. “I met new people, and that was a good experience because I became more knowledgeable about it all, a lot better than when I was racing in the NHRA. 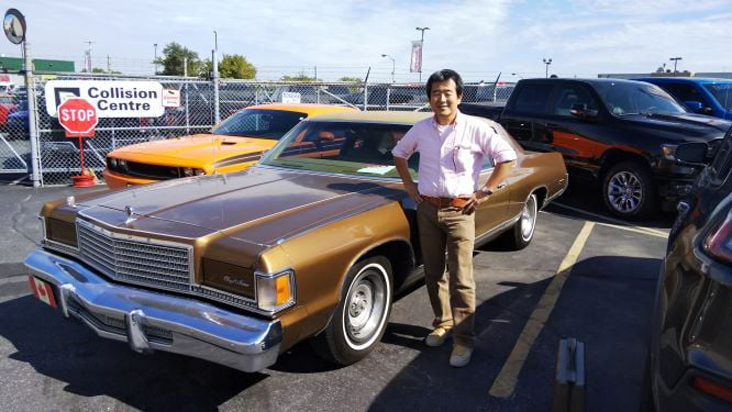 Okazaki continued his primary business, buying and selling American cars and motorcycles (check out his Facebook page here) and also started collecting Pacific War memorabilia, and was especially entranced by the experiences of Japan’s aviators.

“The reason why I was interested in fighter pilots was sometimes I thought the same feeling they may have had when they sat in their cockpit waiting, maybe kind of scared, but as soon as the engine starts, it's just ‘go for it' and nothing else. 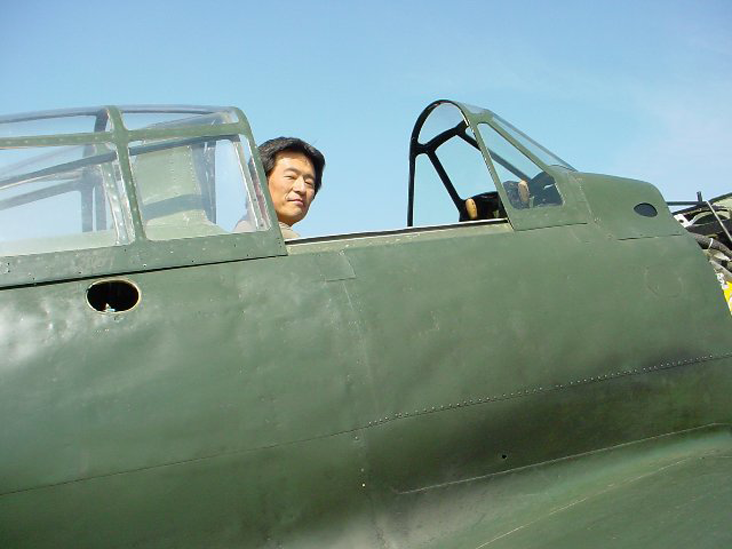 “I got to meet some of the actual pilots, as well as mechanics and radiomen. I visited all over Japan to hear their stories. That was interesting stuff, so different than what you see on TV or read in books or in the newspaper. I purchased a lot of memorabilia — helmets, jackets, airplanes — from top to bottom."

Nearly 25 years removed from his NHRA career, Okazaki, now 61, fondly remembers his time on the tour. 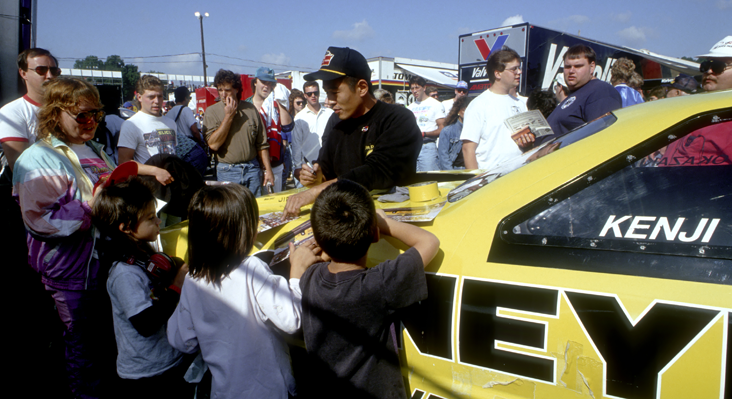 “I appreciate the people from NHRA and the teams, the drivers, and the fans; everywhere I went people were so nice,” he told me. “The other drivers all tried to have relationships with me, but the language barrier made it tough. They’d ask me some stuff, and I probably answered that it didn’t make any sense, conversations were always very short. John Force — I didn’t understand what he was talking about most of the time.” (Us, too, Kenji.)

“That was a great time in my life,” he added. "I appreciate so much what Jim Dunn did because no one else was interested in hiring me as a driver because I had no experience and a different culture."

Both of them took a great chance on one another, and we were all rewarded by his short but highlight-filled that added another chapter to the NHRA history books.