World champ Anthony Bertozzi shows its better to give than receive

Two-time world champion Anthony Bertozzi wins a lot of races, but what he enjoys most is helping his friends win.
03 Feb 2021
Kevin McKenna, NHRA National Dragster Senior Editor
From the pages of National Dragster

Last year, Anthony Bertozzi won his second NHRA world championship when he drove to the Top Dragster presented by Vortech Superchargers title. Bertozzi appeared in four finals and won two races, including the JEGS NHRA SPORTSnationals for a record fifth time. For good measure, he also went to four finals and finished No. 7 in Super Stock with his familiar Pontiac Grand Am. The second championship was long-awaited and well-deserved. It came nearly two decades after Bertozzi’s first world title in 2003. 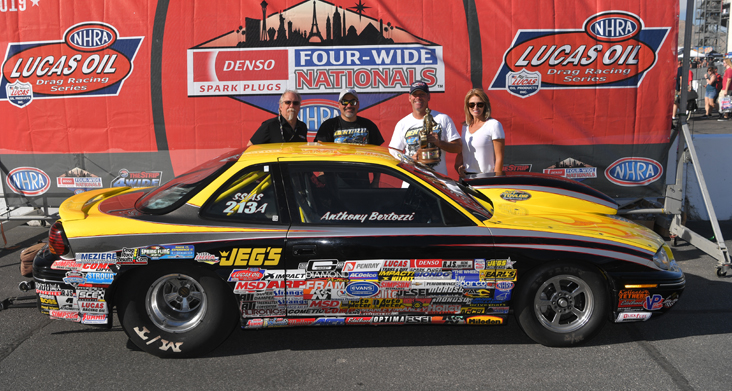 For all the personal success he achieved during the COVID-19-shortened 2020 season, the real highlight of Bertozzi’s year may well have come at a race he didn’t even attend. Bertozzi was relaxing at his home when Steve Sisko made bracket racing history by winning the top prize at the SFG Million in Michigan. Sisko was driving Bertozzi’s Chevy Nova when he claimed the largest payday in the sport’s history. Sisko banked a reported $400,000 for the win, which he split evenly with Bertozzi.

“I was at my house in Virginia Beach [Va.] cooking dinner, and I watched the whole thing on the internet,” said Bertozzi. “My daughter, Brittany, was in Michigan, and she came home and handed me a nice, big check. If you know me, you know I don’t do this for the money, but I have to laugh at winning $200,000 with a car you paid $22,000 for. I just couldn’t be happier for Steve. When he started driving my cars, he always told me, ‘I know I’ve got a big win in me.’ I never doubted him for a minute.”

Indeed, Bertozzi doesn’t do it for the money, and even if he did, the financial windfall can’t compare to the personal satisfaction he gets simply from seeing his friends succeed. The desire to help others has always been a part of Bertozzi’s nature, and it helps explain how he’s become one of NHRA’s most well-liked and well-respected Sportsman racers.

“I just love helping people and watching them do well,” said Bertozzi. “Thanks to my father’s hard work, I’ve been really blessed in business and life, and I have an opportunity to help my friends succeed, and I’m happy to take it. It’s funny, but most of the guys I race with could do very well for themselves. They don’t necessarily need me, but I’m happy to be a part of it.” 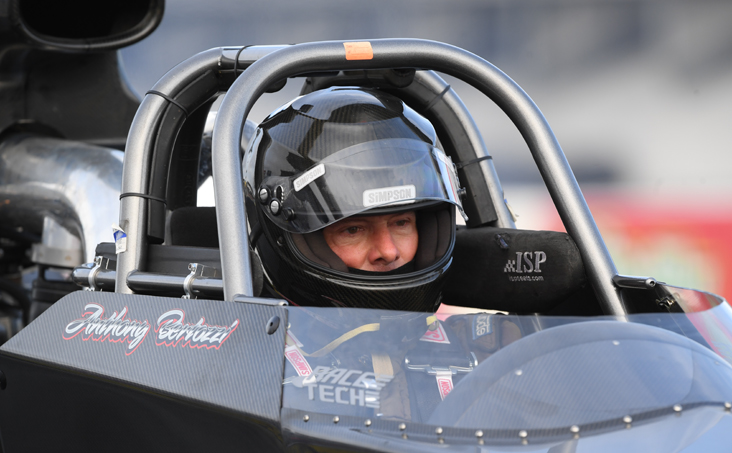 Bertozzi doesn’t know exactly how many race cars he currently owns, but he believes 16 or 17. In addition to the Top Dragster he used to win the championship last season, he’s also got his most prized possession: his 2000 Grand Am Super Stocker that came from the JEGS Mail Order team. Bertozzi also owns the ’69 Camaro Stocker that Joe Santangelo drives and the Corvette roadster piloted by John Labbous Jr. Both of them have won NHRA world titles driving Bertozzi-owned vehicles.

“I was out West racing in Las Vegas about 10 years ago when I first met Joe Santangelo,” Bertozzi recalled. “He was racing for the world championship in Stock and had a deal fall through, so he needed a car to drive. Peter [Biondo] called me and asked if I could help out, and I agreed. Joe had never sat in my car, but he went out and won the world championship. Later on, we worked out a deal to drive my black ’69 Camaro, and he’s been with me ever since, and he does well.”

Bertozzi did a lot to help further the career of Jim Harrington, who won several national events and a host of big bracket racing titles before his untimely passing in 2009. The Super Stock Camaro that Harrington drove later ended up in the hands of world champion Jeff Taylor, who let his son, Chad, drive it.

“That’s another funny story,” said Bertozzi, who rarely lacks for funny stories. “I didn’t go to Norwalk that year, so I was following along on the computer at home just because I wanted to see how my buddy Peter Biondo was doing. It just happened that was Chad Taylor’s first national event because he’d just turned 18. I didn’t even know who he was until after the final, and his father called me and said, ‘You win when you aren’t even here.’ I had no idea they were racing my car until after he’d won.” 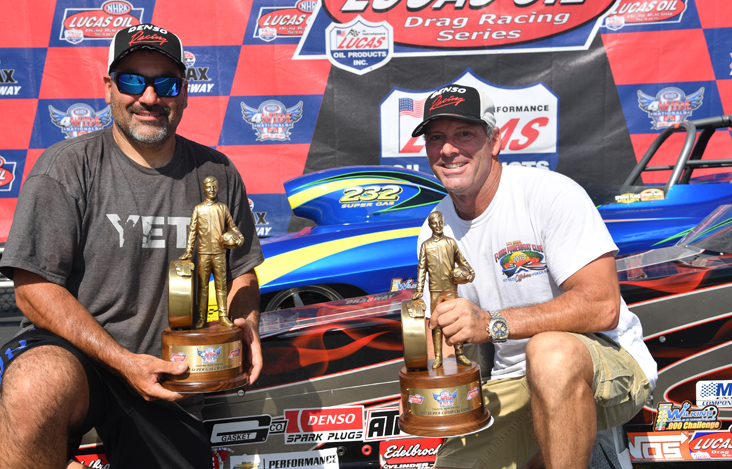 And then there is the legend of Bertozzi’s Super Gas Corvette, which might well be one of the most successful Sportsman cars in NHRA history. Bertozzi bought the car from Bruce Combs in 2010 so Biondo could try his hand at Super Gas. That move turned out to be a stroke of genius as Biondo won three national events and the 2011 NHRA Lucas Oil Drag Racing Series world championship.

“The first year, Pete won enough to pay for the car,” Bertozzi said with a laugh. “Then, we put Pete’s future wife Emily [Lewis] in the car, and she went out and won her first national event in Bristol the following year. It was the first time she drove the car, and she won.”

Later, Bertozzi turned the Corvette over to big-money bracket racer Labbous, who quickly picked up where Biondo had left off. Since 2016, Labbous has driven the car to four more national event wins and the 2017 Lucas Oil Super Gas championship.

“Everyone who has raced that Corvette has won with it, except me,” said Bertozzi. “I drove it one time at the double points meet in Atlanta. The car was perfect, but I was late in the first round and got beat. I was so disgusted that I parked it for the second race. I’m just not a good Pro Tree racer. I’d rather save it for someone who can actually drive.”

Bertozzi has also had a lot of success backing drivers in the world of high-stakes bracket racing. In addition to Sisko, he’s also helped further the careers of Tommy Cable, Kenny Underwood, and Shane Carr, just to name a few.

“I was working with Mike Fuqua, and we put a car together for Kenny Underwood, and he went out and won the Million Dollar Race,” said Bertozzi. “I think I got $40,000 out of that. Kenny eventually made a smart business decision and started doing his own deal. For a while, it seemed like he was sending me $5,000 or $10,000 every week, and he finally realized it didn’t make financial sense for him. He bought his own stuff, and he still wins a lot.

“Honestly, I don’t mind having all those race cars out there,” Bertozzi said. “Typically, in these deals, I handle the maintenance, and the driver pays the entry fees. With my drivers, we split whatever they win 50/50. Financially, they are usually at worst a break-even deal unless [the car] gets stolen or crashed. One year, Underwood called me in a panic. He had one of my cars, and it broke loose and came off the trailer going down Interstate 95. It went into a ditch and rolled up an embankment but never flipped over. All it did was bend the wheelie bars and get mud packed in the wheels. Typical Kenny, he stopped at Atco [Dragway] to make a run just to make sure the car wasn’t damaged and then went to Epping and won the race that weekend.”

As far as his career goes, Bertozzi’s legacy is secure. If he never wins another round of competition, so be it; he’s already punched his ticket to the Drag Racing Hall of Fame. If his 17 IHRA series championships and numerous big-money bracket victories aren’t enough to do it, then perhaps his 24 NHRA wins will surely put him over the top.

Winning last year’s Top Dragster championship was big for Bertozzi because as a two-time champion, he now can enter any NHRA national event without accumulating grade points. For someone who still has commitments to business and family, that’s a huge bonus.

“Right now, I’m in a spot where I enjoy what I do,” said Bertozzi. “I like racing in Top Dragster and Super Stock, and I can pick and choose the races I want to go to. I saw a lot of people upset because the Gatornationals filled up at eight grade points. I don’t have to deal with that now. I don’t have to set an alarm clock to enter a race.” 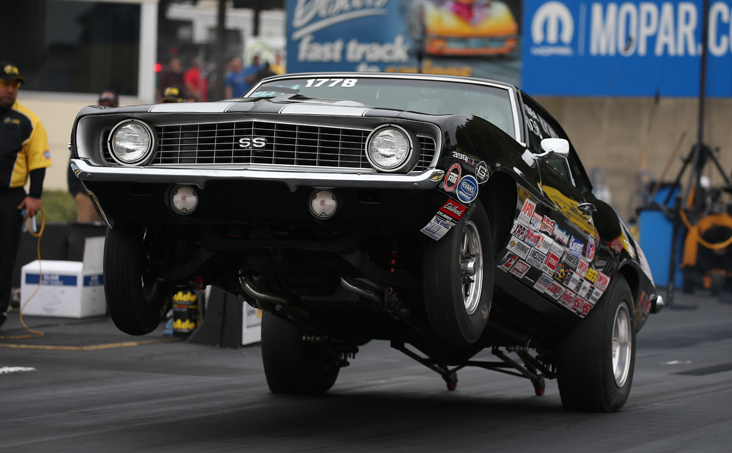 “I’d like to win again in a more convincing fashion,” he said. “It won’t kill my self-esteem if I don’t, but I do realize there were a lot of guys who didn’t get to race much last year. I don’t think there is an asterisk by last year’s championship, but I’d like to do it again just to be sure.”

Bertozzi will also almost certainly continue to revel in the success of his friends and be eternally grateful to those who have and continue to support him, including his daughter, Brittany, grandkids Eva and Stella, fiancée, Kathy Peterson, and her daughters, Kassie and Macie, and teammate Labbous. At home, Phil Ivey is his biggest help. Ivey works on Bertozzi’s personal cars, drives the rig, and handles all the maintenance.

“Looking back, Jimmy ‘the Shoe’ [Harrington] was a big part of this,” said Bertozzi. “He hooked me up with Peter Biondo and Sisko, and that led to deals with Joe Santangelo and Robbie Hudlow. Honestly, there are a lot of people to thank from my parents and everyone who I’ve raced with. As I said, I’ve been blessed. I can’t think of anyone who has driven for me who hasn’t done well, and I’ll say this again: I don’t do this for the money. I remember how excited Labbous was when he won his first national event or how Joe and Pete were when they won world championships. I love being able to share that excitement. I love it on weekends when my phone blows up because one of my guys just won a big race. That’s the real payoff here.” 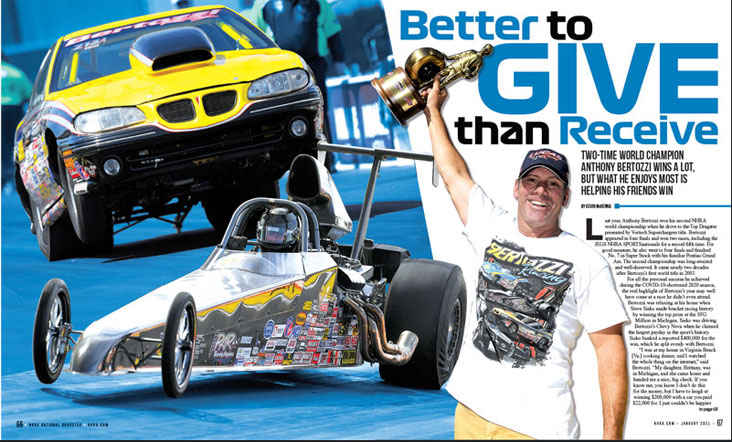