The father-daughter duo of Glen and Jenny Treadwell has been tearing up Comp eliminator the last couple of years, and not just in their home Division 2. Both are national-event-winning threats and championship contenders.
10 Mar 2021
Phil Burgess, NHRA National Dragster Editor
From the pages of National Dragster

In the rich soil of Central Florida’s Lake County, traditional citrus crops and sweet berries take root and prosper in “the Golden Triangle” named after the yellow color of the clay beneath the fertile sandy earth. The Treadwell family has been farming the land there for more than 100 years, and the tropical foliage plants that for the last 40 years have sustained not only Glen and Sharon Treadwell and their three daughters have also nourished a racing team that likewise was being cultivated and constantly growing.

From a humble bracket racing team in the late 1980s, the family now fields two world championship-capable Competition eliminator entries, one driven by patriarch Glen and the other by middle daughter Jenny. Glen is a three-time NHRA U.S. Nationals winner, a six-time Division 2 champion, and a past world champion runner-up. Jenny is the only female in NHRA history to have won a division championship in Comp, and she’s done it twice, including last season.

Like the plants that they tend, which recently expanded to hemp and (briefly) medical marijuana and even a CBD business, the Treadwell Nursery racing operation began small and humbly with Glen running in Quick 8 and Quick 16 bracket races at Orlando Speed World Dragway. He had matching altereds in the late 1980s, one a successful dial-your-own bracket machine and another that ran in Comp’s B/EA class that couldn’t even run the index.

Again, like the plants, it just needed some TLC.

“We worked on it and worked on it until we got it competitive,” recalled Glen, who has always taken pride in building his own engines and transmissions. “I remember the day we were first able to run under the index, which back then was a lot harder than it is today, and we raced for two years before we ever won a round of racing. We kept getting a little better and a little better, and we’d get to .20 under, then .25 under, and finally started winning a round or two. We just kept picking at it.” 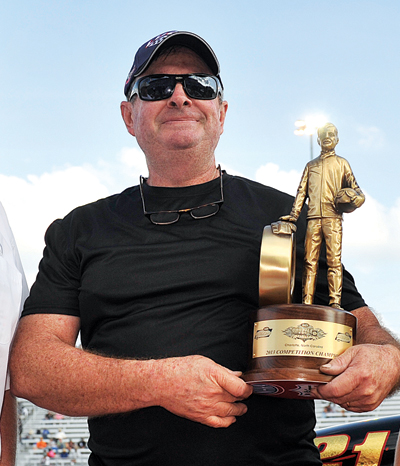 Daughters Jammie, Jenny, and Julie joined Glen and Sharon on their racetrack journeys, instilling in them a love of not just travel but racing.

“It’s always been a family deal with us,” Glen said. “We always tried to make a vacation out of racing and visit places the girls wanted to see. We’ve been to the Grand Canyon, the Rocky Mountains, the Painted Desert, Mount Rushmore, Mount Rainier. It’s fond memories all around because everyone enjoyed it.

“We’d usually leave on Friday, sometimes even taking the girls out of school a bit early, drive all night, race, then drive home all night Sunday so they could get to school on Monday. Many a time we rolled in the door early Monday, they’d get a shower, and get right on the bus to go to school. It’s all about teamwork; everyone in our family plays a key part, whether it’s on the road or manning the home front and the businesses.”

All three daughters are or have been involved in facets of the team, but Jenny was the one who took the biggest shine to the sport.

“She’s always been the one who had an interest,” recalled Glen. “She’d be out in the shop and more mechanical than the other girls; riding go-karts and scooters, that was more to her liking and ability than what her sisters were doing.”

“I was always part of the pit crew,” Jenny reminisced. “My first job was to check the tires, and I took it very seriously, and back before computers when people used to videotape their rear tires on the launch, that was my job, too. My sisters liked racing, too, but were usually indoors, reading or cooking or doing crafts, and I was outside in the shop with my dad. I remember being a young kid and asking for a toy truck for Christmas, and it freaked my parents out wondering why I wasn’t asking for a doll, but we all learned that you can be mechanical and still be a girl.

“I always wanted to be a driver, too, but my parents weren’t sure they wanted me to be a driver. I’d driven my mom’s car down the track in Orlando, but I wanted to be in Comp like my dad. I begged for years, and they finally relented, and I’ve been doing it ever since.”

Division 2: A tough row to hoe

Jenny started racing Comp in 2006 in a dragster that was powered by the same six-cylinder Ford that had long ago replaced the small-block Chevy in the family’s altered.

By that time, Glen was a well-established star, not only in Division 2, where he won his first points meet in 1991 and his first of six championships in 1993, but on the national stage as well. He won his first NHRA national event in 1995 and did it in the grandest arena, at the U.S. Nationals. He won from coast to coast, from Englishtown to Las Vegas to Houston, then he won Indy again in 2005, then won the U.S. Nationals again the following year to become the first Comp racer in NHRA history to win the Big Go three times and just the third to win in back-to-back years.

Jenny reached her first divisional final round in Valdosta, Ga., in 2009, where she faced, of all people, her father. Dad won that round, and Jenny finally tasted the fruits of victory a few years later at her Orlando home track, where she defeated world championship contender Arnie Martel, then won the division championship for the first time in 2016, four years after her dad’s most recent title.

In addition to their eight combined championships, each has had at least one second-place finish in the division, which is saying something in a division populated over the years with heavy hitters like David Rampy, Martel, Randy Daniels, Grant Lewis, Mike Saye, and Larry Pritchett.

“We may not have as many cars down here, but we have good cars,” Glen opined. “You’re going to get beat up if you come down to Division 2.”

Getting “beat up” was an experience that many of us had in the COVID-19-strangled 2020 season, and it definitely affected the Treadwells. They were able to get in some early Division 2 racing at Atlanta Dragway before the pandemic shutdown. Jenny switched cars with her dad and reached the winner’s circle with their two-time Indy-winning roadster that had been in the family since 1998.

They were able to race a few more times as the schedule opened up from track to track but sat idle from late June, when they competed at the Division 2 event at Galot Motorsports Park, until they decided it was time for a late-season road trip in early October.

“Because Jenny had won in Atlanta, we knew if we did well there was a slim chance she could win the division,” said Glen. “Way out west in Division 7, they had a doubleheader in Phoenix, a weekend off, then another points meet and the SPORTSnationals in Las Vegas. It made a lot of sense to be able to run that many races that close together, and it turned out to be about the same distance we would have had to drive back and forth to make four or five races in the Southeast.”

The trip couldn’t have gone much better. Steve Thackett from Star Vacuum Pumps came out to help Jenny run the roadster, and she won the first leg of the Wild Horse Pass Motorsports Park event, defeating her father in the final round, then was runner-up to Division 7 champ Joe Mozeris in the second event.

Two weeks later, with Scott Rose and Alan Layton added to their teams, Glen won the divisional event at The Strip at Las Vegas Motor Speedway (defeating Mozeris in the final), and then Jenny began piling up round-wins at the SPORTSnationals and eventually reached the semifinals before the event’s completion was postponed two weeks due to high winds and sand on the track. Unfortunately, due to business, the Treadwells could not stick around for its completion, denying crestfallen Jenny her best chance to date at her first national event win.

“That’s a sore subject,” Jenny admitted. “I wanted to stay. I was practically begging him to stay, but we had to leave.”

“That trip so far exceeded our expectations – it was over the top – but, unfortunately, we’d already been gone so long and had the [CBD] startup business, we just couldn’t stay,” said Glen. “We put Jenny in that car this year because it’s our best car and the index was good, and she’s been driving so well, we thought this was her year. I’m proud of her; she does a great job. Hopefully, 2021 will be a more normal year, and we can get her that win.” 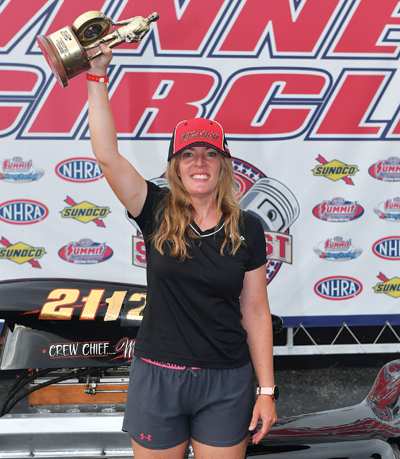 Jenny did end up winning the Division 2 title but had been hoping more to add her name to the very short list of female national event Comp winners: Amy Faulk (1983 Atlanta), Maryann Austin (1998 Dallas and 1999 Houston), and Jacklyn Gebhardt-Still, who handed Glen one of his 11 career runner-ups when she beat him in the final of the 2009 Houston event.

“Winning a national event – winning a number of national events – is still very high on my list,” she said, “and, of course, I’d like to beat dad to winning a world championship [Glen’s highest finish was second in 2010 behind Al Ackerman].”

Glen, whose last national event win came at the fall Charlotte event in 2015 when he took down multitime world champ Frank Aragona Jr. in the final, is also hoping to wrap his hands around a Wally again, but even if neither can do that, the fun will still be there.

“We enjoy the people and enjoy the competition, and that’s what keeps us coming back,” said Glen. “We’ve also had a lot of people that helped us along, guys like Gordon Holloway (“Jenny’s biggest fan”) and Sherman Sligh,” and their fellow six-cylinder Ford racers (“the Woodchipper society,” said Jenny with a laugh), guys like Steve Ambrose and Bob Huettman, Ralph Hope, Joe Williamson, and Jerry Arnold, who helped one another blaze a trail to the winner’s circle.

“From the beginning, Sharon and I wanted to develop an expectation of having fun while racing,” he added. “Don’t get me wrong, we always want to win, but the thing we learned is that it’s really better to just enjoy racing, and if you win, that’s a bonus. We learned to manage expectations, and I believe that’s helped us not be so up and down and keep it fun.” 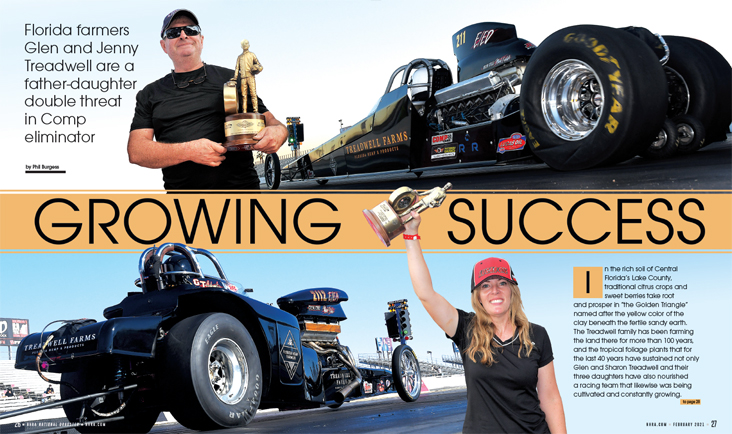