10 Unforgettable Moments From the 2021 NHRA Season

A a sense of normalcy returned to NHRA racing in 2021 but that doesn’t mean there wasn’t plenty of drama, excitement, and unexpected twists and turns along the way. Here are 10 of our favorites
31 Dec 2021
Kevin McKenna, NHRA National Dragster Senior Editor
From the pages of National Dragster

A a sense of normalcy returned to NHRA racing in 2021 but that doesn’t mean there wasn’t plenty of drama, excitement, and unexpected twists and turns along the way. Here are 10 of our favorites

THE SMASHING DEBUT OF “DOUBLE-OH” DALLAS 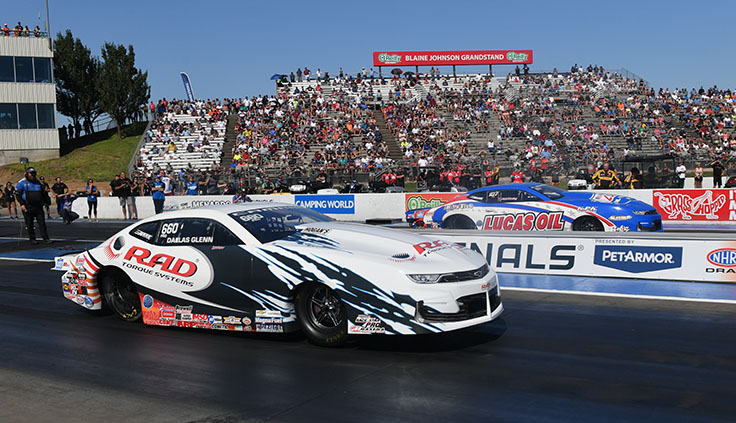 Coming into the 2021 season, Dallas Glenn had made exactly zero runs in a Pro Stock car. By the end of the season, he was a three-time winner, the NHRA Rookie of the Year, and perhaps the most feared driver in the class. It took just four starts for Glenn, a longtime KB Racing crewmember, to find the winner’s circle at the NHRA Four-Wide Nationals in Charlotte, but it was his second win in Topeka that really stood out as he cut a .006 light in the semi’s and followed with a perfect .000 in his holeshot win over Kyle Koretsky in the final round. Glenn’s third win in Las Vegas was no less impressive as he used a .001 light to stop four-time champ Erica Enders. 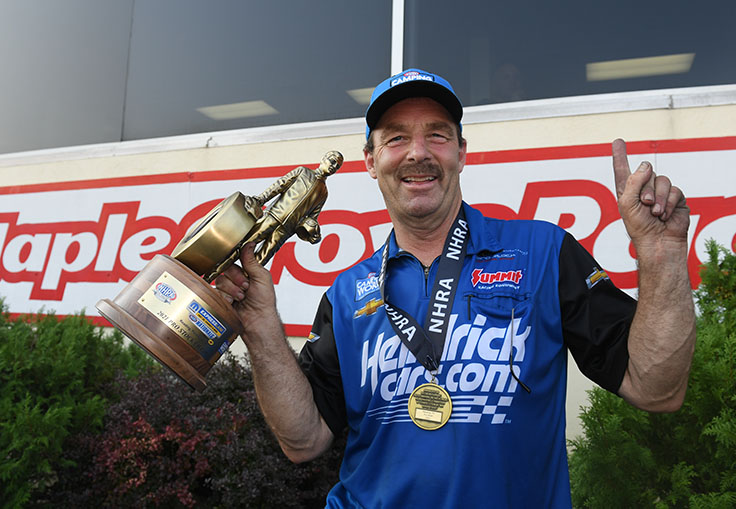 For the last three seasons, Greg Anderson has been chasing one of the most significant milestones in Pro Stock: Warren Johnson’s all-time record of 97 victories. Anderson entered the 2021 season with 94 wins, but he hadn’t won a race since the 2019 Dallas event. Anderson quickly went to work, winning the season opener in Gainesville as well as the final event in Atlanta. Anderson tied the record during the Countdown to the Championship with a victory in Reading and took sole possession of first place a couple weeks later when he defeated Chris McGaha in the Dallas final. Anderson ended the season with his 99th career victory in Pomona to wrap up his fifth Pro Stock championship. Next, he’ll look to John Force, Frank Manzo, Dan Fletcher, and David Rampy in the exclusive 100-wins club. 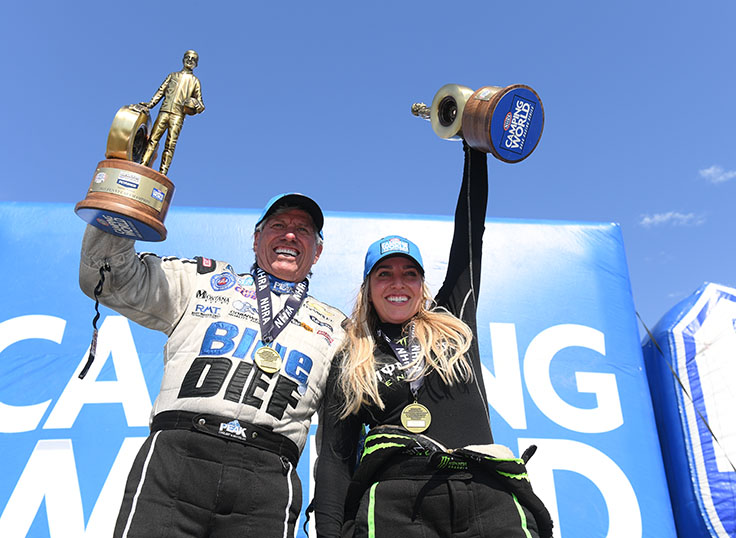 Ever since John Force rolled out his first Top Fuel dragster, he’s longed to share the winner’s circle with his daughter, Brittany. That dream became a reality this year at the Menards NHRA Nationals in Topeka. John wheeled his Peak Chevy to a final-round win over J.R. Todd to claim his 154th Funny Car title, and Brittany won her only race of the season when she drove her Monster Energy dragster past Clay Millican in the final round. Ironically, it wasn’t the only time this season that a father and daughter shared the winner’s circle as Joe Mozeris and daughter Kayla pulled off a similar feat in Denver with wins in Comp and Super Stock, respectively.

LET ME PLEASE INTRODUCE MYSELF 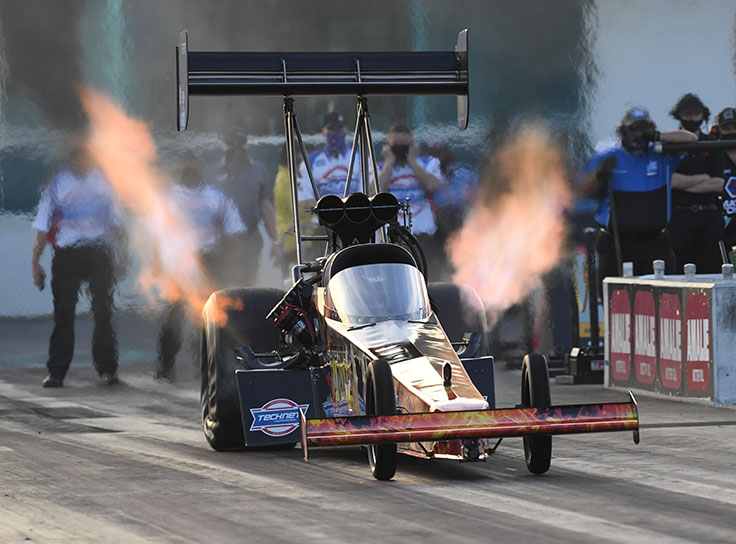 Josh Hart came into the 2021 season having previously won two NHRA U.S. Nationals titles in Top Alcohol Dragster, so it wasn’t unreasonable to expect success when he made his Top Fuel debut in Gainesville. What followed, few could have predicted as Hart won his first start as a professional at the Amalie Motor Oil NHRA Gatornatonals in Gainesville. With very few runs under his belt, Hart qualified in the top half of the field and defeated Clay Millican, reigning champ Steve Torrence, Justin Ashley, and Shawn Langdon to join the short list of drivers who have won in their debut. What made Hart’s win so impressive is that he’s not just a driver, he is also an owner who assembled his own team, including crew chief Ron Douglas. To prove it wasn’t a fluke, Hart also won the fall Charlotte event.

NO PLEASE, YOU GO FIRST 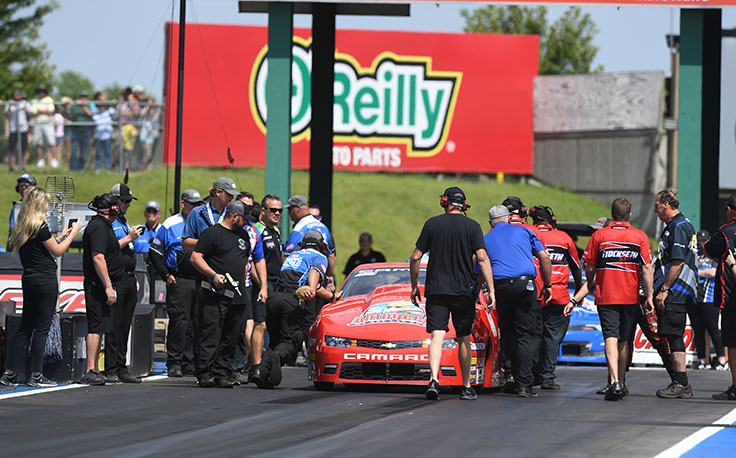 In a typical day, three minutes isn’t much time, but sitting on the starting line behind the wheel of a 1,500-hp Pro Stock car, it can seem like an eternity. That’s approximately how long Bruno Massel and Mason McGaha sat on the starting ling during their epic burndown in Topeka. For starter Brad Hardy, it was simply too long. When repeated attempts to get both drivers to stage were ignored, Hardy disqualified both combatants in one of the most dramatic moments of the season. Neither driver was pleased with the outcome, but it was hard to argue that Pro Stock wasn’t the most talked-about class following that event. 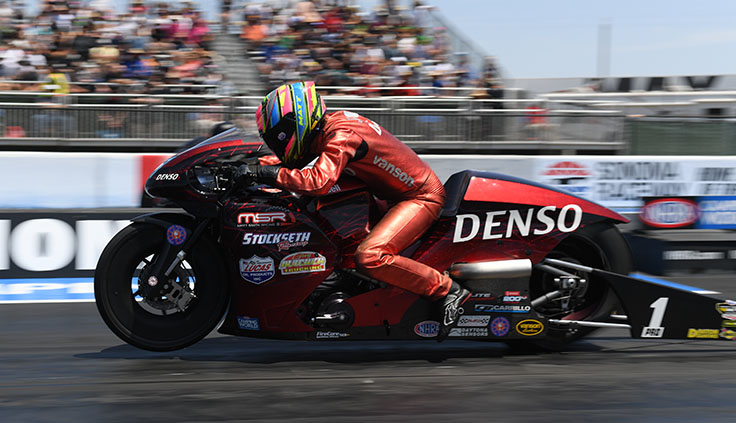 It seemed to take forever for the Pro Stock Motorcycle class to reach 200 mph, but since that barrier has been breached, performance gains have seemed to come at regular intervals. Eddie Kraweic set the early pace in 2021 when he ran 203.49 mph at the NHRA Four-Wide Nationals in Charlotte, but a couple of months later, that record was obliterated when Matt Smith laid down a 205.04-mph run at the NHRA Sonoma Nationals. A total of six riders topped 200 at that event, but no one could touch Smith’s Denso Buell. As an interesting sidenote, there has still never been a 204-mph run in the class, which helps illustrate just how impressive Smith’s performance was. 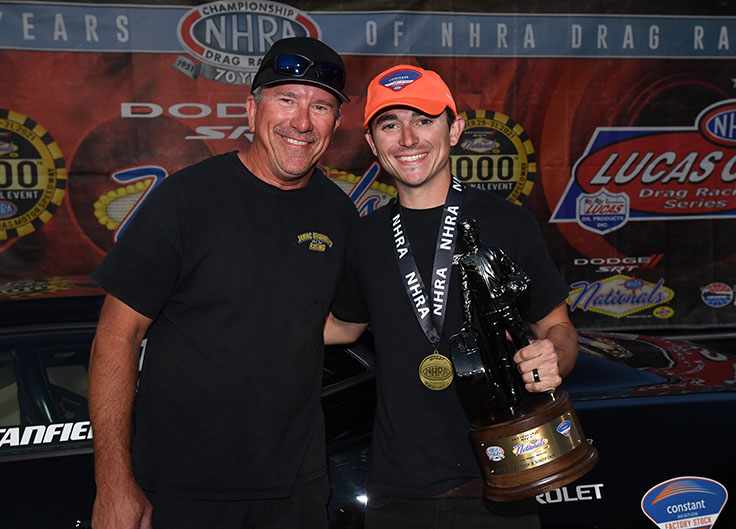 With back-to-back championships in the Constant Aviation NHRA Factory Stock Showdown and four wins in the Pro Stock class, Aaron Stanfield is a rising star in the NHRA Camping World Drag Racing Series. This year, however, Stanfield took a back seat to his father and mentor, Greg, who won his fifth championship in Super Stock and his first since 1994. At the start of the season, Greg had no intentions of pursuing a title, but after winning three of his first six NHRA Lucas Oil Drag Racing Series events, he was committed and finished with a flourish, winning the national event in Bristol and a runner-up at the delayed Houston event. Ironically, Stanfield won the title in the same trusty ’87 Camaro that carried him to his first four championships in the early 1990s.

TEAMMATES JOEY GLADSTONE AND CORY REED GET TOO CLOSE FOR COMFORT 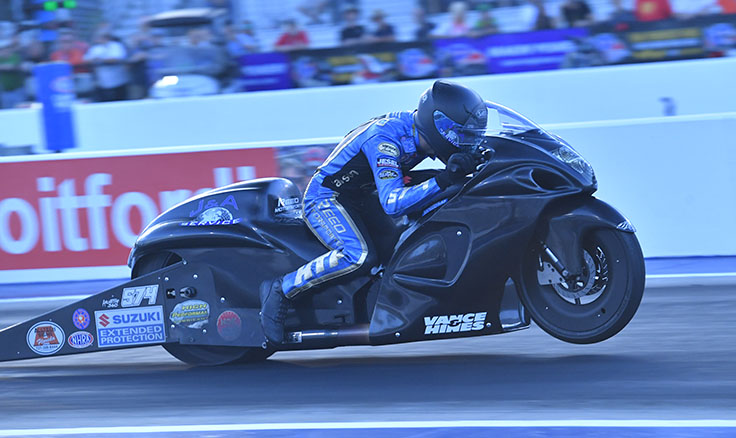 Pro Stock Motorcycle teammates Cory Reed and Joey Gladstone provided one of the most harrowing moments of the 2021 season when they collided at the DeWalt NHRA Carolina Nationals in Charlotte. Gladstone won the second-round battle, but the run turned into a disaster when Reed’s bike drifted across the centerline and made contact with Gladstone. Reed was thrown from the bike and suffered a compound fracture of his left leg. Gladstone, who earlier this season suffered injuries in a test accident, miraculously managed to stay on his bike and toughed it out and reached the final, where a loss to Angelle Sampey prevented what could have been a storybook ending. At season’s end, Reed is continuing his rehabilitation and is expected to return in time for the 2022 season opener. 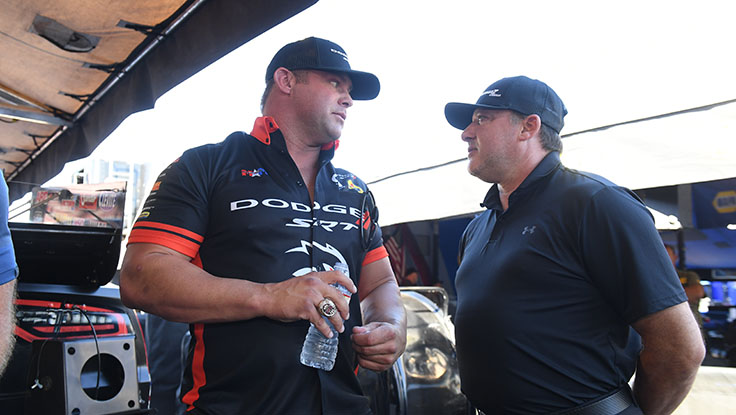 Years ago, three-time NASCAR and former IndyCar series champion Tony Stewart expressed a strong interest in NHRA Top Fuel racing during a visit to the NHRA U.S. Nationals in Indy. The Hall of Fame racer, team owner, and businessman made good on that promise this year when he announced the formation of Tony Stewart Racing, which in 2022 will field a Funny Car for Matt Hagan and a Top Fuel car for Stewart’s now wife, Leah Pruett. Stewart is well-known as a “hands-on” owner, and his drag racing venture appears to be no different. While he hasn’t formally announced plans to compete, Stewart has made several 300-mph runs in a Top Fuel dragster, which leads one to believe he could become an active participant at some point. 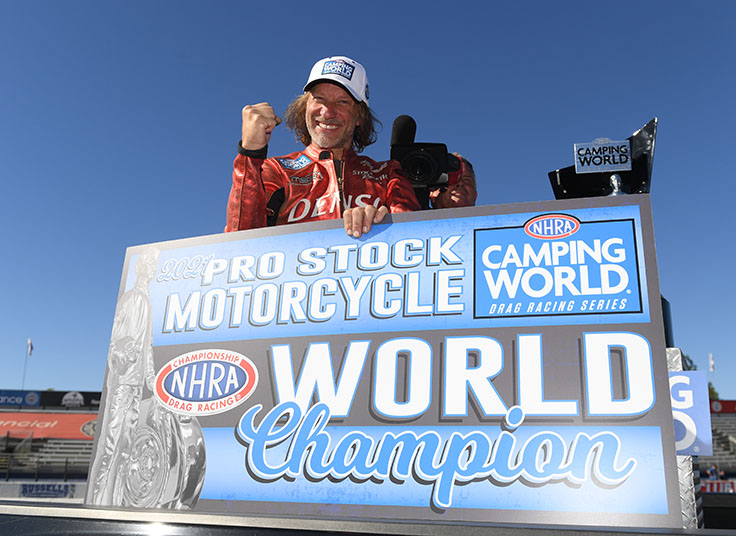 The NHRA Camping World Drag Racing Series Professional classes were not decided until the final weekend of the season at the Auto Club NHRA Finals in Pomona. The Countdown to the Championship playoffs is designed to prevent a runaway, but this year’s battles were exceptionally close with several lead changes down the stretch. Steve Torrence was able to lock up his fourth Top Fuel title without much trouble as he needed to win just one round in Pomona. The Funny Car battle was a bit more intense as Ron Capps held off a charge by reigning champ Matt Hagan on Sunday. Capps lost to Hagan in round two and watched from the starting line as Hagan later lost in the semi’s to Alexis DeJoria, clinching the title in Capps’ favor. In Pro Stock, Greg Anderson took matters into his own hands by beating rival Erica Enders in a heads-up race in the semifinals, and Matt Smith clinched his fifth Pro Stock Motorcycle title after rivals Angelle Sampey and Steve Johnson both lost early.