In a small theatre in Cambridge, Mass., in May 1974, aspiring music critic Jon Landau saw fledgling rocker Bruce Springsteen for the first time and famously wrote for Boston’s alternative weekly newspaper, The Real Paper, “I saw rock and roll’s future, and its name is Bruce Springsteen.”

In June 2018, I stood on the starting line at Bristol Dragway and saw drag racing’s future, and its name may be Donovan Rose. OK, well, that may be overstating the case and putting a little too much pressure on the kid, but my chance meeting with the 10-year-old Jr. Dragster driver couldn’t have come at a better time as we were beginning work on this special issue celebrating NHRA’s youth movement and programs.

As preparations were underway Sunday for the pre-race opening ceremony of the Fitzgerald USA NHRA Thunder Valley Nationals, I was assembling the lucky group of NHRA members for our popular Backstage Pass perk. One group was unable to attend so I had a couple of extra passes in my hand. It was at that moment that Donovan, proudly wearing a Ron Capps T-shirt, approached me on other business.

“My dad says you’re the guy who makes National Dragster,” he said, more statement than question.

“Yep,” I said proudly but wondering where this was going.

“Well, I just want to tell you I like the pictures you put in there. I cut them out and play with them.”  Man, a kid after my own heart. I remember when I did the same thing, cutting out magazine photos to adorn my bedroom walls and, later, to keep my driver cards updated when I played the Vallco Drag Racing board game. 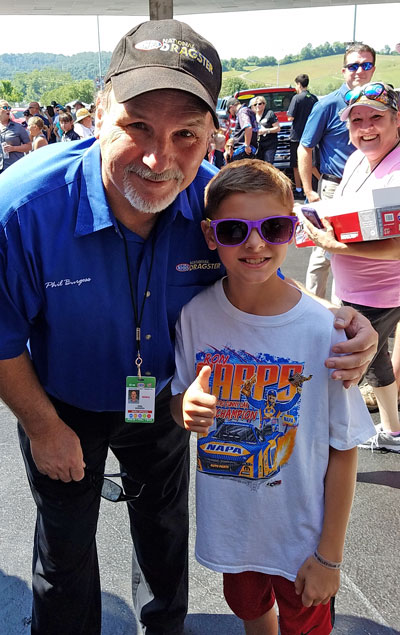 “Yeah, it would just be nice if he waited until I was finished reading it,” chimed in his dad, Mike, who hosts a sports radio talk show on WJSN in Jackson, Ky., and was standing nearby.

“Make sure you guys get a picture of my car; it says Rose Bros. on the side,” Donovan promoted.

“Donovan,” cautioned dad, “maybe you should wait until you get some wins before you go saying that.”  Bingo. NHRA member. Huge fans. Appreciators of NHRA National Dragster. A racing family. Confi dent kid. I handed the leftover passes to them and shepherded them backstage. My kind of people.

Well, turns out that ol’ Donovan didn’t need much of a chaperone. He has known Capps for years, despite them living on opposite sides of the country, and is a regular at the ropes of Capps’ trailer. When Capps came backstage, they greeted one another warmly.

The kid wanted a photo with John Force, too. The bad news was that Capps would be racing Force in a few minutes in the first round. Donovan smartly tucked his arms inside the T-shirt and gave it a 180-degree twirl to the blank back. Force laughed heartily and posed for the photo.  As fate would have it (he would probably use a different adjective), Capps won that day. I spied Donovan at the ropes of the winner’s circle celebration. He was yelling at Capps, who saw him and gave him a wink and a wave. I grabbed Donovan and hustled him back behind the stage for a closer congrats and couldn’t help noticing him ogling the Wally trophy clutched in Capps’ hands.

Donovan is probably like hundreds of our Jr. Dragster drivers out there — kids who represent the future of drag racing. Big dreams, big passion. We’ve already seen so many drivers graduate from the NHRA Summit Racing Jr. Drag Racing League into NHRA’s other series, and with incredible success, proving what a valuable training ground the league is.

And with the addition the last few years of the Jr. Street class, which allows kids 13-16 to affordably compete in their mom’s or dad’s car (with an adult co-driver), and NHRA’s continued efforts in advancing careers in all areas of motorsports through its Youth & Education Services presented by the U.S. Army program and its Career Opportunities Fairs, the future is very bright. We’re also making early fans with our popular kids 12 and under free program that is offered at most NHRA Mello Yello Drag Racing Series national events.

When I look back at my early fandom, which started at a very young age, and look at where I am now, and at the people and programs that surround me, it’s a very proud feeling to know that what Wally Parks built, and what thousands of NHRA employees, competitors, sponsors, and fans have helped sustain over the years, will carry on long into the future, and we hope that this issue celebrates that future.