The Science of Winning: Growing Pains and The Cycle of Improvement

It’s only when we make the commitment to truly dig deep and improve that the true extent of how much we don’t know becomes painfully obvious.
02 Apr 2021
Luke Bogacki
From the pages of National Dragster

So, you want to become a better racer? You’re serious about this pursuit. You’ve invested significant time, money, and effort. Perhaps this means that you’re racing more often; building experience. Maybe it’s a renewed commitment to the practice Tree, or dedicating additional time (and/or money) to equipment upgrades, or surrounding yourself with successful competitors in an effort to hivemind the best practices and habits. Perhaps your pursuit of growth has even led you to the premier membership community that I host alongside Justin Lamb, ThisIsBracketRacing ELITE.

Whatever the specific situation may be, you’ve made a tangible commitment to your improvement on the racetrack. Congratulations. That commitment, in and of itself, is worthy of praise.
Yet, despite that commitment to growth, you don’t feel like you deserve a pat on the back. In fact, at times this seemingly noble pursuit can feel extremely futile. Here’s the contradiction: We think that the more we immerse ourselves in a pursuit (in this case, we’ll keep it to racing, but this can apply to any pursuit), the more we learn and experience, the more confident we’ll feel in our knowledge and/or abilities. That’s logical, right?

Instead, what typically follows is a broad, heavy sense of overwhelm. Rather than beginning to find strength in our progress, we begin to quickly realize how much we don’t know. This is especially problematic when we entered this pursuit believing that we understood, at least at a fundamental level, what was necessary to succeed — only to find out that there’s so much more to it.

“Do not mistake the pursuit of wisdom for an endless parade of sunshine and kittens. Wisdom does not immediately produce stillness or clarity. Quite the contrary. It might even make things less clear — make them darker before the dawn ... Even a master or a genius will experience a period of inadequacy when they attempt to learn new skills or explore new domains.” — Ryan Holiday

It’s only when we make the commitment to truly dig deep and improve that the true extent of how much we don’t know becomes painfully obvious. This tends to overshadow the fulfillment that we (should rightfully) take from simply putting legitimate effort into a worthy pursuit. It’s jarring — because it forces us to question whatever sense of identity that we’d built around the base of expertise we had — naively assuming that base was all we really needed to know or do. It can be debilitating. If we’re not steadfast, it can make us pull back when we’re actually at the precipice of progressing forward.

I’m convinced that the nature of development is cyclical. When we first commit to growth in a pursuit — any pursuit — we’re fired up. It’s intriguing. It’s fun. We can see where we want to be, and we begin to dig into how we can become the best version of ourselves in this pursuit. Look at this: I’m growing!

Then, the inevitable pain sets in. In simpler terms, this often takes the shape of, “What the hell am I doing? I had no idea what I was getting into. I’m never going to get this.”
Let’s say, for example, that you’re an amateur bracket racer with a passion for the sport. You get a taste of the intoxicating nature of the big-dollar bracket scene, latching on to a handful of competitors who have an incredible ability to make it look easy. Now, you’re ready to go win a $50-grander! You know that you have to get better, to improve every facet of your game.

So, you begin to research how you can upgrade your equipment. Countless research articles, conversations, and Google searches later, you’ve inevitably got a list of $50,000 worth of “necessary” upgrades for your race car. A quick peek at the bank balance (and perhaps a cautionary glance from your spouse) abruptly brings the pain of overwhelm to reality!

You select a couple successful competitors who are willing to take you under their wing and share some of their experiences. And an hour into the conversation they’ve covered some of the monumental amount of information that they process in the brief time prior to, during, and following a round of competition. Seemingly, they pay close attention to a hundred variables that you’ve never even considered!

The initial innocent feeling of intrigue — and that false bravado that comes with it — has permanently disappeared. In its place, overwhelm and a pile of self-doubt. 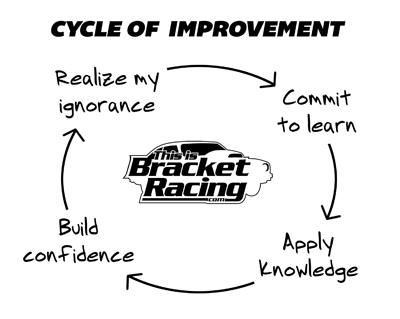 These are the initial steps of the growth cycle: intrigue, followed almost inevitably by overwhelm. When (not if) you hit that point in your own pursuit, it’s going to test your resolve. It’s when you really question how much this means to you, and you have to make a real decision as to whether or not it’s worthwhile to continue. Oftentimes, it’s the wake-up call that we need to realize we’re starting down the wrong road. Once we’ve explored the specific process of growth and have a true knowledge of the opportunity cost involved, there’s no shame in iterating and changing course, assuming that we determine the cost simply outweighs the potential benefit.

If, however, this pursuit feels like something you need to do — if the passion even slightly outweighs the pain — I implore you to stay the course. When you hit the overwhelm stage, take a deep breath and think about ways to break it up. You can’t master everything at once. Oftentimes, the optimal starting point is the low-hanging fruit. Ask yourself not what aspect of the game that you need the most improvement, but rather what facet in which you could grow the most quickly and easily. Making strides in that area — however small they may seem — can catalyze momentum. When we begin to believe that we’re making progress, that progress tends to snowball.

Growth is a perpetual cycle; not a finite pursuit. While we can (and may be best suited to) create arbitrary landmarks along our journey, there’s no finish line. Commit to this new pursuit through the intrigue, through the inevitable overwhelm, and into the third stage: perpetual growth, which can facilitate predictable success. We do so with a very clear understanding that we’re not going to see a monumental impact overnight, and that as we grow, we’re supposed to realize even more that we don’t know. That’s the “perpetual” part of perpetual growth! As the cycle continues, the cumulative effect grows. As we make gradual gains in knowledge, apply that knowledge, build confidence from that application, and realize that there is constantly more potential — our knowledge, application, confidence, and awareness continue to grow.