After a pair of near misses, Kyle Rizzoli is more determined than ever to win an NHRA world championship
30 Mar 2021
Kevin McKenna, NHRA National Dragster Senior Editor
From the pages of National Dragster

When it comes to his racing career, Kyle Rizzoli has a lot to feel good about, not the least of which is his Jr. Dragster title at age 13, his back-to-back Division 7 titles, and, perhaps most of all, his three Top 10 finishes in Super Stock and Stock over the last two seasons. During the COVID-19-shortened 2020 season, Rizzoli finished No. 4 in Super Stock and No. 7 in the highly competitive Stock eliminator class. A year earlier, he was the championship runner-up in Super Stock, finishing just 22 points behind eventual champion Vic Penrod. For all the prestige and respect that goes along with having a single-digit competition number, nothing compares to winning a championship, which makes Rizzoli’s last two seasons equal parts rewarding and frustrating. 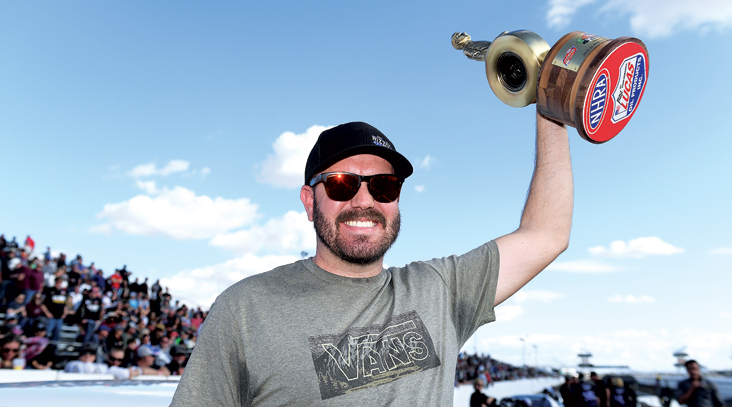 Rizzoli had big plans for 2020, but like almost all else, his weekly planner was rendered nearly useless once the COVID-19 pandemic hit in March. With little activity on the West Coast, Rizzoli ventured to places like Acton, Mont., for the Division 6 NHRA Lucas Oil Drag Racing Series doubleheader as well as trips to Indianapolis and St. Louis. The Indy trip was especially gratifying as it produced a win in the annual JEGS NHRA Allstars competition, helping to soothe a pair of early losses during the Denso Spark Plugs NHRA U.S. Nationals.

“I would say the first year [2019] was far more frustrating than last year,” said Rizzoli. “To be so far out front and have it not happen was tough. We had a three-race push at the end of the season, and I thought I executed really well, but the cards just didn’t fall in my favor. It was disappointing, but it also almost vindicated all the work I’d done to be able to race at the highest level.” 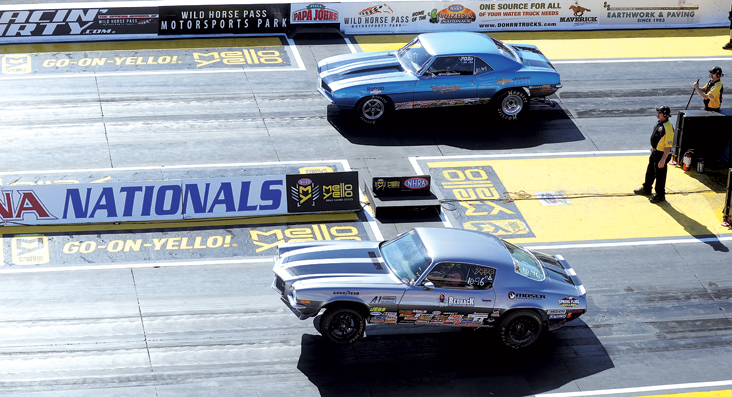 More than a year later, Rizzoli still admits that losing the 2019 Super Stock championship was a bitter pill to swallow. Coming into the final race of the season, the Auto Club NHRA Finals in Pomona, Rizzoli needed a win to overtake Penrod, and he nearly got it. Late Sunday afternoon, he faced off against Dan Fletcher, NHRA’s most accomplished Sportsman racer, in a crucial semifinal battle. Rizzoli was good, but Fletcher was slightly better, winning the race by a scant three-thousandths of a second. Rizzoli did win the Stock Eliminator title in Pomona, but it was a small consolation considering how close he’d come to winning the Lucas Oil Super Stock championship.

“I remember that last race in Pomona, though. On Sunday morning, I was still in with two cars and had a sort of epiphany that I may be there for a double [victory] and a championship,” he recalled. “That made me excited; not scared, just pumped up. I thought I drove well all day. I won the race in my Stocker and then had to go race Dan in Super Stock. That was a great race. We both dropped, and he threw up a .25 pack against me. He said his car was junk, but he still went out and made the right decision. That’s why he’s Dan Fletcher. The next part of that story is that I came back the next year and won in Phoenix. I beat Justin [Lamb] in a really good race, and I just think that proved 2019 wasn’t a fluke.”

“Last season, Bryan Worner ran away with it early,” said Rizzoli. “I didn’t have my best season but still threw up a couple of wins. There was a moment after I got the win in St. Louis in my Stocker that I thought I might have a shot at a championship, but then we went to Phoenix, and I didn’t drive as well as I should have. I did finish in the Top 10 with both cars, and that has turned into my target. Honestly, I feel so lucky to accomplish what I have; a championship is the last thing to achieve, but you need to have everything, including luck. Just ask Jody [Lang, 2020 Stock champ].” 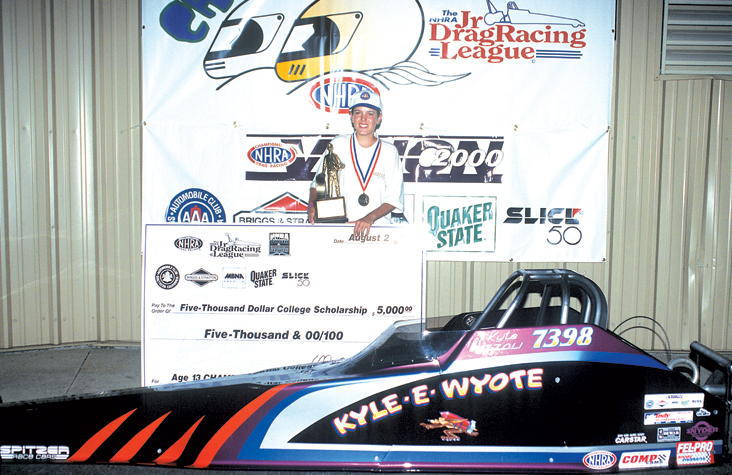 The fact that Rizzoli is a drag racer isn’t the least bit surprising since his father, Jim, was a regular at West Coast events in Top Alcohol Dragster and won the Division 7 TAD title in 1992, ending Blaine Johnson’s three-year run as the Pacific Division champion. Rizzoli was just nine when his father won the championship, but two years later, he began his own driving career in the Summit Racing Equipment NHRA Jr. Drag Racing League. Rizzoli was a regular at Rialto Raceway, the same Southern California track that helped launch the careers of future Pro and Sportsman stars Shawn Langdon, Leah Pruett, Morgan Lucas, Del Cox, Ryan Mangus, and the Fischle family. The competition at Rialto Raceway was intense, and to this day, Rizzoli is better off because of it.

“That was such a hardcore group of racers,” Rizzoli recalled. “We didn’t run every weekend, but we raced a lot. Sometimes we’d have a bracket race and an index race, which was a nice change of pace. We all took it seriously. I think that made all of us better drivers, or at least more multi-faceted. I give a lot of credit to our parents. They let us go out there and beat the heck out of each other. It was a great environment to grow up in.”

The highlight of Rizzoli’s Jr. career came in 1997, when he ventured to Denver’s Bandimere Speedway and won the national championship in the 13-year-old division. Not surprisingly, he shared the winner’s circle with fellow Rialto alumni Langdon and Cox, who won in the 14- and 15-year-old classes, respectively.

Once he aged out of the Jr. Drag Racing League, it was a natural progression for Rizzoli to make the move to “big cars,” and he announced his arrival in a huge way by winning the 2002 Auto Club NHRA Finals in Super Comp in his Spitzer Race Cars dragster. Racing in a rain-delayed Monday final round against future Pro Stock star Dave Connolly, Rizzoli nailed the Tree with a .002 light and won with an 8.917, holding off Connolly’s quicker 8.908 by just two-thousandths of a second.

For all his success in Super Comp and E.T. racing, it was always a family goal for Rizzoli to return to the Top Alcohol Dragster category, and that became a reality when they formed a partnership with fellow West Coast racer Larry Miersch.

“My dad and I weren’t really bracket racers, but Super Comp made sense,” Rizzoli said. “My network of friends, Shawn, Morgan, Ryan Mangus, and Brad Plourd, all grew up together, and that’s where we went. I also got a chance to race the Lucas Oil dragster for Forrest and Charlotte Lucas. I got paid to race Charlotte’s car, and that was awesome.

“Still, my dad always had a goal to go back to Top Alcohol Dragster, and we built that A/Fuel car with Larry Miersch. That was fun, and we had a couple of great seasons. I loved racing with my dad, and the car was fun to drive, but it was also a ton of work. I can remember cutting clutch discs all day long. I enjoyed the tuning side, but we eventually burned ourselves out. We also stopped around the time Mark Niver was killed in Seattle. After that, things were different. I won’t say I was scared, but we had so much respect for Mark. He was one of my dad’s closest friends, and things were just different after that. 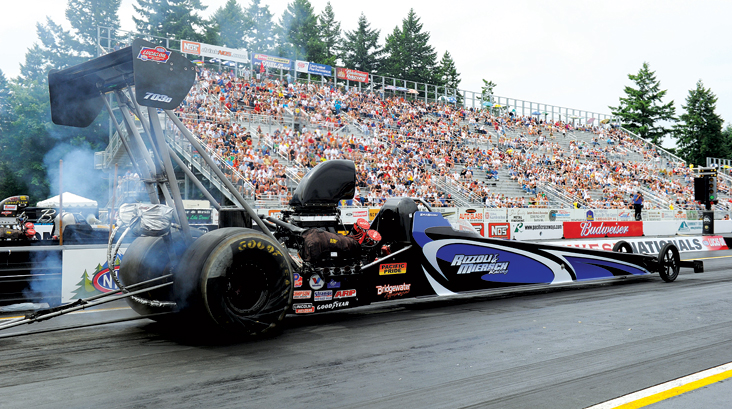 “I do remember some races where I was racing Top Alcohol Dragster and my Stocker, which was kind of funny because I had all this safety equipment in the dragster when I was strapped in it, looked like I was going to the moon. Then I’d get in the Stocker with just a helmet and do a 100-foot wheelstand. Those two cars are equally cool, just for different reasons.”

A SHOW OF FAITH

It’s worth noting that Rizzoli doesn’t own either of the ’69 Camaro race cars that he drives in Super Stock and Stock. His Stocker, affectionately known as “Blue” for obvious reasons, is owned by longtime Division 7 racer Dave Bridgewater, who has a fleet of class cars. As for the white Super Stock car, its nickname is “Peppy,” and it’s owned by two-time Top Alcohol Dragster world champion, current Pro Mod racer, and longtime family friend Jim Whiteley. Rizzoli is trusted to store and maintain both vehicles, and he treats both of them like they are his own.

“The Bridgewater deal came about 10 years ago,” said Rizzoli. “I was running Stock with my ’67 Camaro, and Dave and I were talking randomly about ’69 Camaros. If you know Dave, he hoards ’69 Camaros. He’d just bought this car from Dale Howard, and it was a fast A/SA car. I asked him what he was going to do with it and offered to tow it around for him, and he agreed. Dave is a wealth of knowledge when it comes to things like building engines, and we talk probably a couple of times a month. 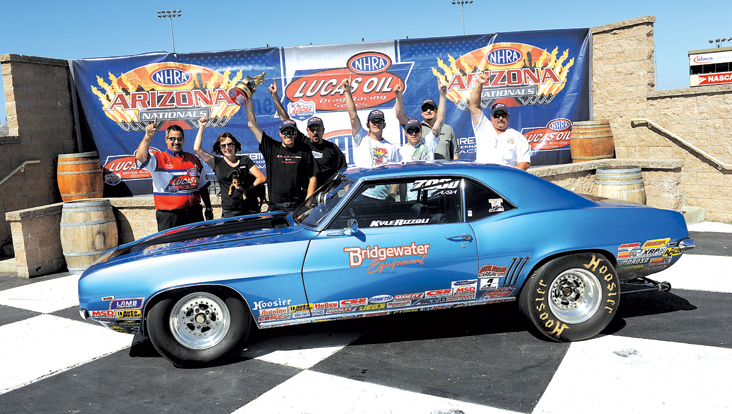 “As for the Super Stocker, that’s a funny story. Jim approached me at the banquet after I’d won the [Division 7 Stock title]. He offered to let me drive the car, but I was still running the A/Fuel Dragster, and you can’t drive three cars. A while later, we stopped racing the alcohol car, and I started racing Bridgewater’s late-model Firebird in Super Stock. I couldn’t do anything right in that car, but I thought that having two similar ’69 Camaros might be best, so I asked Jim, and the offer was still on the table. ‘Peppy’ is the car he drove in high school, and it’s the first car he drove down a dragstrip. I’m just the protector now.”
Bridgewater and Whiteley aren’t the only two people who stand firmly behind Rizzoli in his quest to be the best racer he can be. His parents, Jim and Kay, remain very much involved, and the same goes for Rizzoli’s girlfriend, Julia Harrigan, and his sister, Karen. He also has the support of the family business, Rizzoli Automotive, a business founded by grandfather Mario in 1976 and now includes a pair of locations in San Luis Obispo and Santa Maria, Calif. In addition to Bridgewater Equipment and J&A Service, Rizzoli’s racing operation also has the backing of Hoosier Tires and J.B. Dewar Petroleum.

So far, Rizzoli’s 2021 season has been a mixed bag. He won the Southern Sportsman Showdown, a bracket racing event in Tucson, Ariz. He nearly raced himself in a final round but fouled by .002-second in his second entry. He had planned to make his NHRA season debut in Gainesville, but that cross-country trip was scuttled after the Super Stock car developed an engine issue. Instead, Rizzoli plans to hit the upcoming K&N Spring Fling Million Dollar race in Las Vegas, and he’ll pick up the NHRA tour two weeks later at the Denso Spark Plugs NHRA Four-Wide Nationals, also in Las Vegas.

“I’m going to run my bracket car to start the year, and then we’ll get after it with the Stocker and Super Stocker,” Rizzoli said. “When it comes to the championship, I’m trying to condense it. I want to think about my schedule a little more carefully and race where I think I might have an edge. I have really good equipment and have the best car owners in Dave and Jim. I also have the support of my family, and we’ve worked hard to put ourselves in the best position to succeed. Now, we just need to put it all together.” 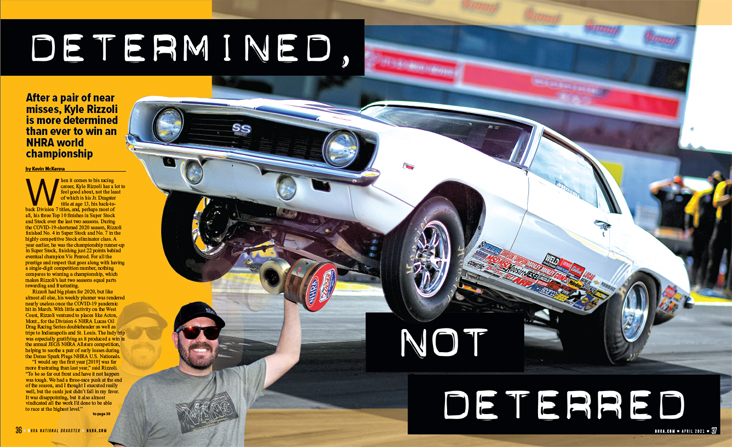