The Science of Winning: Let It Be

Let it be. These three words can be interpreted in two distinctly useful ways. The first: whatever happens, happens. The second: whatever our lofty desire or dream … let it come to fruition. Not necessarily, “Make it happen!” Rather, let it be.
15 Jun 2021
Luke Bogacki
From the pages of National Dragster

There is an innocence to beginning. Whether it’s blissful ignorance or genuine curiosity (or a combination of both), we often enter into new situations and pursuits with an open mind and a desire to soak it all in. We’re at the base of the mountain. Excited for the challenge, we glare up at the glamorous peaks, often blind to the intimidating climb and dangerous obstacles standing in our way.

At the beginning of our pursuit, we typically have a very receptive frame of mind: our goals may be lofty, yet our expectations are nearly nonexistent. This tends to be the optimal state for growth; there are few preconceived notions to cloud our pursuit of consuming the massive amount of information that we don’t know, and at the same time, we’re not burdened by what we’ve determined to be our potential (because we have no gauge for it yet).

From the base of the mountain, we think, “If I achieve this, I’ll be satisfied,” whether this is an incremental landmark or the tip of the peak.

As we climb, however, we begin to realize what we’re capable of. As we expand these capabilities, our expectations grow. While this can build confidence and drive continued growth, the constant moving of the goal can also become both exhausting and anxiety-inducing. It’s easy to fall into the trap of striving for what’s next (and berating ourselves for not already achieving it) while dismissing how far we’ve come (and not giving ourselves any credit).

We convince ourselves that we can work hard enough to alleviate the anxiety that comes with expectation. The more I prepare, the more confident I’ll be. And yet, the harder we work, the greater our expectations often become.

There is a subtle but important distinction between desire and expectation.  It can be as simple as the difference between gratitude (for the opportunity to compete) and pressure (to win). 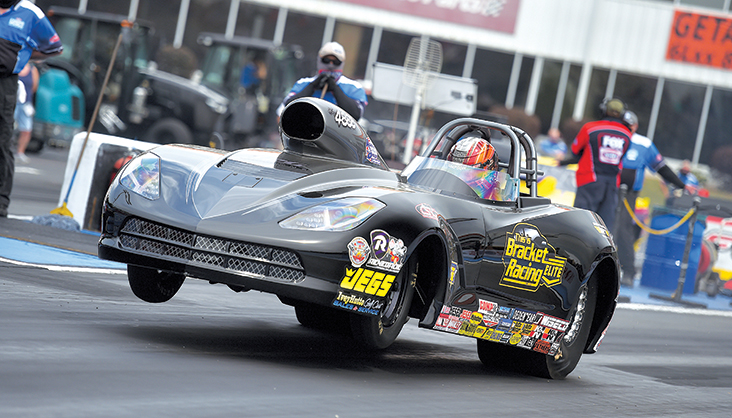 A member of ThisIsBracketRacing ELITE and a personal friend is a tremendously talented and accomplished racer who hails from a region that is largely removed from big-dollar bracket racing. Years ago, one major event brought its huge purses and tremendous prestige to his neck of the woods. My friend, a multi-time track champion, looked at the event as a national stage upon which to showcase his talents. He didn’t just want to win the main event, he wanted to dominate the entire weekend.

Each year, however, he would fail to succeed on the opening days of the event — for a variety of reasons. By the time that the main event (day three) came along, all of that bravado and confidence with which he entered the week was shot. He expected perfection from himself and applied a ton of excess pressure to achieve it. When the initial returns didn’t match his expectations, he began to question himself (at the worst possible time). As a result, not only did he fail to win the main event — year after year, he performed well below his potential on the biggest stage.

This season, my friend came into the event with a brand-new race car. He opened competition with a slew of “new-car blues” — mechanical issues that removed not only his ability to win, but his chances of even being competitive. It wasn’t until the day before the main event that he was able to make full-power runs and begin to accumulate some data.

He came into the main event on the heels of early exits, just like in prior seasons. In contrast, however, he came into the big show without expectation. Simply having a race car that went down the track felt like a win at that point. A funny thing happened: this was the year that it all came together. My friend advanced to the final round, earning the biggest payday and the most exposure and recognition of his illustrious driving career.

A second member of our team has always been a talented racer but had never been able to have success on the bigger stages. In fact, up until a few months ago, he’d never won a top-bulb bracket race of any sort. He knew he had the talent. He’d gotten close a bunch. But when the chips were on the table, he liked to say that he’d typically “get in [his] own head.” He’d put so much pressure on himself to perform that he’d often make a mistake.

“It’s easy to fall into the trap of striving for what’s next while dismissing how far we’ve come.”

Recently, he advanced to the quarterfinal round of a big event. There, his opponent red-lighted, and his car slowed down .05 with an undetermined drivetrain issue. Rather than bemoan his luck, or overanalyze the situation, my friend simply chose optimism, dialed up, and ultimately found a way to win his first event (and a $10,000 payday). In retrospect, even he admits that the car issues may have been a blessing in disguise, simply because his focus on the obstacles distracted him from any self-defeating thought loop. In other words, the burden of expectation was removed, and perhaps it was a weight lifted off his shoulders.

In both of the instances described, mechanical issues were an unchosen forcing mechanism. Neither racer wanted to have problems. And yet, in retrospect, those issues may have provided just the mental reset that they needed: a tempering of expectation that ultimately facilitated their best performance.

How can we create a similar situation without, you know, sabotaging our race car?

Many of our ELITE members have found the following three keys useful when it comes to facilitating our best performance while minimizing the burden of expectation:

We all want to win any event that we enter. The stories above illustrate that constantly striving, pushing, and applying internal pressure isn’t necessarily the path to success.

Let it be. These three words can be interpreted in two distinctly useful ways. The first: whatever happens, happens. The second: whatever our lofty desire or dream … let it come to fruition. Not necessarily, “Make it happen!” Rather, let it be.