Playing All the Engels

Doug Engels didn’t win the NHRA Lucas Oil Drag Racing Series Comp world championship last year, but it certainly wasn’t for lack of effort. Late in the season, with a strong chance of winning his first title, he wrecked his dragster in a top-end tumble at the NHRA Midwest Nationals in St. Louis but rebounded a few weeks later with a backup car to continue his fight.

The hard work nearly paid off but, despite a runner-up finish at the season-ending Dodge NHRA World Finals in Las Vegas, the Watertown, S.D., auto-repair business owner finished second behind two-time world champ Craig Bourgeois, a career-best finish yet still shy of his ultimate goal that the 25-year class veteran dreams about.

Long road to the top

Very few racers are able to jump into the deep waters of Comp eliminator racing with the horsepower, driving skills, and financial wherewithal to be successful right out of the gate, and Engels was certainly no exception to that rule.

Engels, who runs a six-bay general automotive repair garage, Doug’s Auto Repair in Watertown, S.D., cut his racing teeth at Thunder Valley Dragway in Marion, S.D., bracket racing a 12-second ’62 Nova daily driver at age 17 in the early 1980s. His oldest brother, Lynn, also was into racing, and Engels worked at his brother’s gas station, which was a local hot rod hangout. The Nova gave away to a quicker ’67 Camaro then to his first dragster. 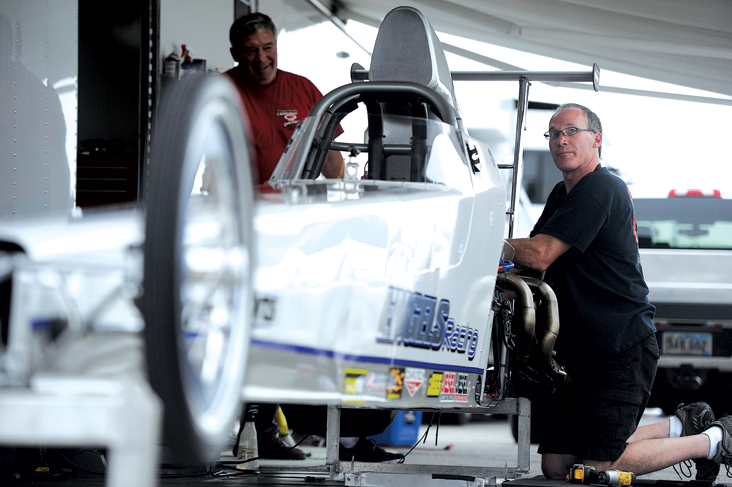 “I bought my first dragster when Super Comp started to get big in the mid-1980s,” he remembers. “I bought a throttle stop, but I’m not sure if I ever got it on the car because it just seemed backward trying to slow a car down instead of making it go faster. Growing up, I was friends with [Comp racer] Mike Foster, and I knew I wanted to do something different besides the Super categories, so that’s how I got into Comp in the early 1990s. I already had an altered, and Mike built me a small-block Chevy, but it didn’t take me long to figure out it’s very tough to be competitive.

“That car didn’t run very well, so I decided to buy a proven car. I bought a rolling chassis from Glen Treadwell, bought a Garley Daniels motor, and we ran it in A/Econo Altered. The car was fast right out of the box, but if I knew then what I know now, we could have been so much better.

“Running in Comp was so much harder than I thought it would be. It takes a tremendous amount of work and dedication, and the fact that your hard work could be wiped out if someone in your class hits the index was very tough. David Rampy later became well known for protecting his index, but I remember back in his earlier days he beat the heck out of the A/Econo Altered index to the point that even he couldn’t run it anymore.”

Getting into the win column

Engels collected his first piece of NHRA hardware when he won the Division 5 points meet at Brainerd Int’l Raceway in 1995. He reached his first national event final a year later, also in Brainerd, but was runner-up to eventual world champ Bo Nickens. Engels would be turned away in four more national event final rounds before his big breakthrough win at (where else?) Brainerd in 2000.

“By the time I’d get to a final, I’d be all used up [on index] and someone else would still have index left, so I had to learn how to manage that,” he said. “It was just about getting more seat time and to just keep after it.”

In 1998, Engels traded his altered in for a dragster and has competed in one in Comp every year since.

“I bought the dragster from Garley and Randy Daniels,” he said. “They were going Pro Stock Truck racing and sold me a car that they’d hardly even run. They had always run six-cylinder engines, and I was thinking I’d run the car with a small-block V-8 in C/ED but ended up buying their entire car and running in D/ED with a V-6.

“I really enjoyed the switch to the dragster. Everything was easier, from not having to mess with the body and being easier to work on the engine to having a better index. The six-cylinder had such a history of being a problem engine, so it deterred a lot of people from trying to, which allowed us to protect the index.”

Engels racked up three more wins over the next two years and his 2003 campaign, which included a win at the fall Chicago event, gave him a shot at the title. He actually had the points lead entering the penultimate event of the 2003 season in Las Vegas, but engine woes kept him from even qualifying, and Dean Carter passed him for the title, and Santo Volpe zoomed into second. 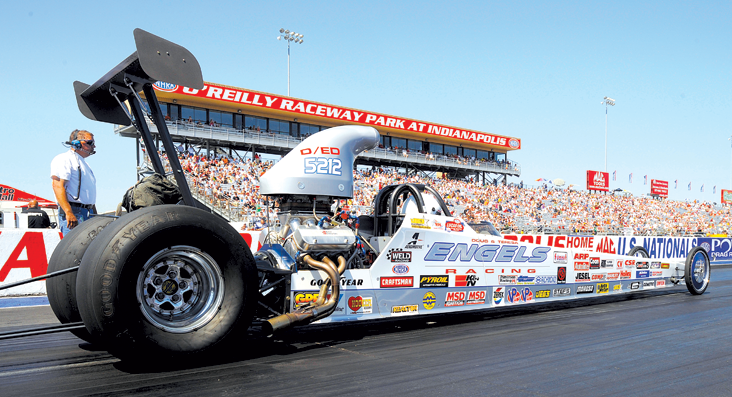 Engels’ biggest triumph was yet to come, winning the prestigious NHRA U.S. Nationals in 2008. What should have been a pinnacle of his career as he ascended the mountain had turned into a plateau as he’s yet to reach the national event winner’s circle again in the 12 seasons since then.

Part of the reason for the drought is that Engels sold the car after the 2008 season and began competing in Super Stock, first with a ’57 Corvette and later a ’66 Corvette and an Olds Ciera. He won a Division 5 points meet in (of course) Brainerd in 2001 but never a national event. Today he races a ’66 Chevy II in Super Stock, including at local Super Stock/Stock Series events in the region. 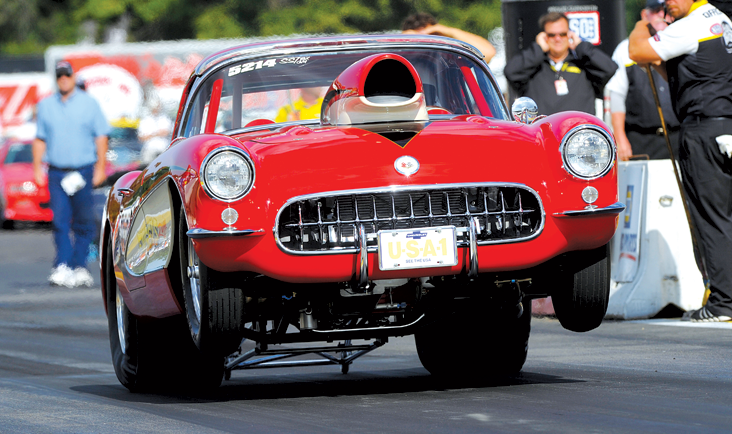 A detour on the championship map

Engels’ 2020 started with a runner-up to Randy Daniels in Orlando, Fla., and kept getting better as the year rolled on, including a sweep of both Division 5 events at Heartland Motors Park in Topeka.

“We started out good in Florida and then come summertime, when my combination runs good, we doubled up in Topeka,” he said. “Most people couldn’t even run .45, but we were fast, and I drove good and won both races. From there, winning the championship looked possible, so we just tried to map it out.”

Engels’ roadmap to the championship took a serious detour in round one of the NHRA Midwest Nationals in early September when he lost the handle on his dragster during a loss to David Billingsley. 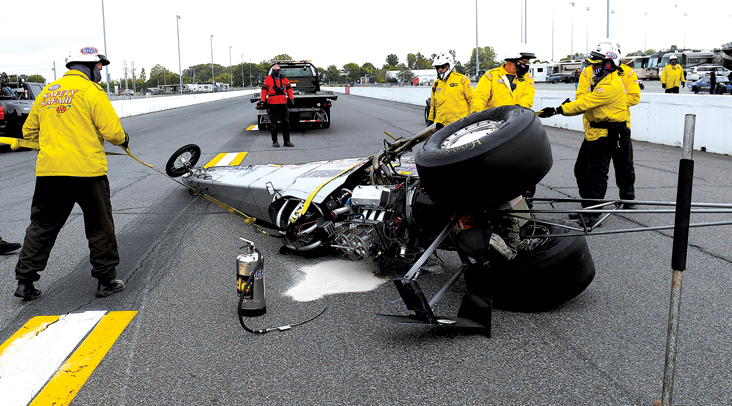 “Just driver stupidity,” he allowed. “I’d put new [brake] pads and rotors on the car a couple of weeks earlier and was riding the brakes a little coming up on him to protect the index. When I lifted, the back wheels just locked. I could feel the car sliding and went into panic mode. Before I could even think, it went sideways, and it was gone. It went backward into the wall then flipped onto its side and slid down the track.

“I felt I was done, just over it,” he said. “I took the car to Jesse Plant, who had built the car, and he said he’d fix it, but couldn’t do it right away. I was so down, but after I was able to get it out of my mind for a little bit, I was ready to come up with a plan to continue.”

Back on the road

Not yet ready to let his dream slip through his fingers, Engels regathered his thoughts. He had a spare car set up to run D/Dragster with a manual transmission. He hadn’t driven it for four or five years but poured his efforts into getting it race-ready for the next event, the AAA Texas NHRA FallNationals. A pre-event Division 4 National Open served as a test session for Engels and his crewmember, fellow racer John McLaughlin.

“That worked out perfect because we had some bugs to work out of it with the clutch and linkage, but by the time the national event started, we were running fast, I was hitting my shift points, and won a couple of rounds before red-lighting.

“The smart thing would have been going to Houston [for the SpringNationals], but John was going to Las Vegas instead to race, so I went there. I felt like it was a good call, but it turned out that the car counts were down, and I couldn’t get a five-round win, then Craig [Bourgeois] won the Houston event, and it was over.

“We wanted to finish as high as we could, plus we’d had such a dry spell. I really wanted to go out with a win. We qualified No. 1, but we were having some radio issues. When I ran Art Hodges in round one, he red-lighted but decided to run it out anyway. Our indexes are almost the same, so I didn’t see the red-light and neither did John because he was videotaping the run. By the time he saw it, I was too far away for the radio, and I didn’t hear anything, so I stayed in it and ran .66 under and really hurt my index. That was a hard one to swallow. 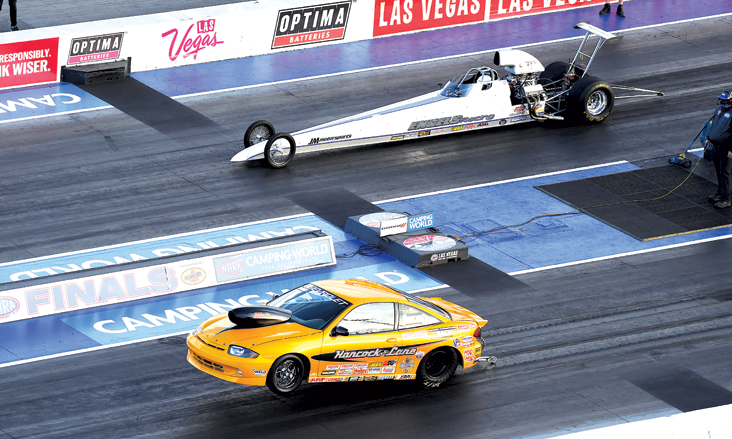 “We made it to the final, but we were used up, and Cody Lane knocked the Tree over in the final [.009 reaction] and got the win. To make matters worse, our motor dropped a valve at 1,200 feet because we were having some delay issues with the shifter buttons and the engine had been winding past the shift point all day. In the end, there were just too many gremlins.”

Repairs are still underway on the crashed dragster chassis, which needed a new roll cage, front end, and body panels, and on his powerplants. He currently has three engines — two splayed-valve V-6s built by fellow Comp racer Scott Chamness and one with the more current CFE cylinder heads and the short-deck block assembled by Rick Watters.

When he does get back out, he’ll have the chance to run one of the three classes — D/Econo Dragster or  D/Dragster Automatic for the automatic car of the  D/Dragster with the manual transmission.

“I can run D/ED and D/DA in the one car without changing anything other than the letters on the hood scoop. Today in Comp, if you don’t have more than one class you can run in with your combination, it’s very tough,” he said. 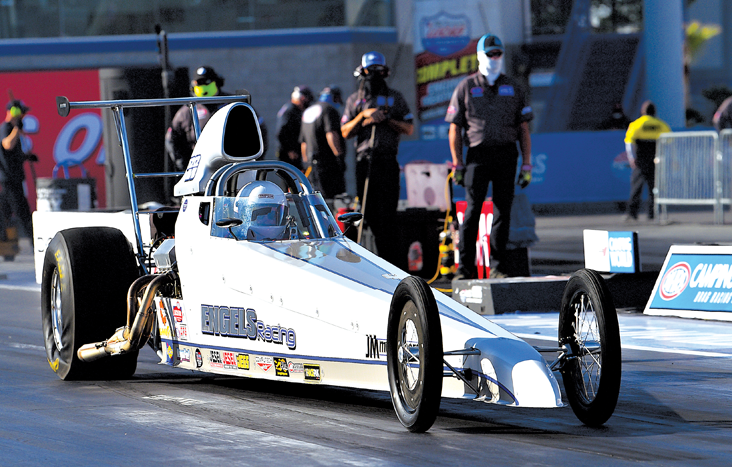 Of course, after getting so close last year, the championship is the ultimate goal, but only one Division 5 driver — Colorado’s Lou Ficco — has won a world championship in the last 40 years.
Other than winning another national event, a primary goal this year is making it to his second JEGS Allstars squad; he’s currently in second place in Division 5.

“Running Division 5 is challenging. It’s a big division with a lot of altitude tracks. If you don’t have a good high-altitude combination, it can be really hard, or you have to run some races in Division 3 or 4, but our success last year has given me the hope and the confidence to try it again.” 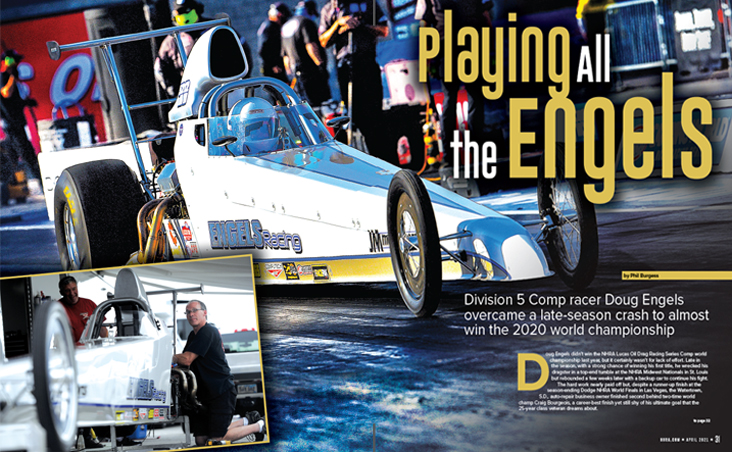