Could 2021 be the year that Shawn Cowie finally wins the TAD championship?

If resiliency alone won world championships, Shawn Cowie probably would have run out of fingers for championship rings by now. The Top Alcohol Dragster racer finished in second place for the fourth straight time last season, but 2021 might be his year.
08 Feb 2021
Phil Burgess, NHRA National Dragster Editor
From the pages of National Dragster

If resiliency alone won world championships, Shawn Cowie probably would have run out of fingers for championship rings by now.

The British Columbia native finished in second place in the 2020 Top Alcohol Dragster championship battle, but it was his fourth straight championship runner-up without ever grabbing the crown.

The fact that he is even racing at all is a miracle after a devastating highway motorcycle accident 10 years ago this April left his body shattered and his racing plans very much in jeopardy. It took two years of surgeries and therapy to get him back behind the wheel. 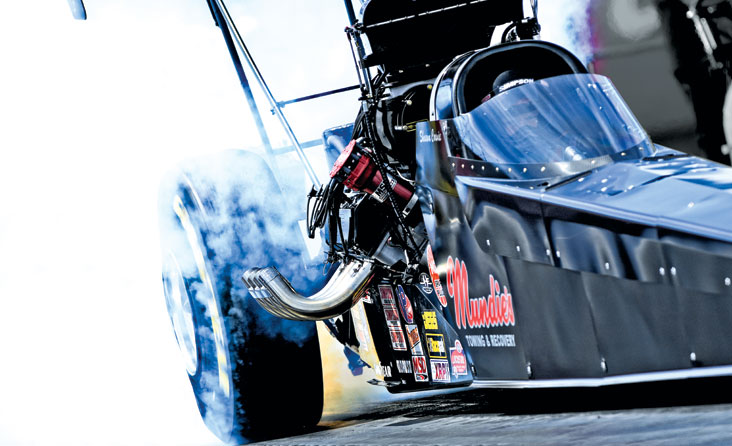 “It’s heart-wrenching at the end of the year when you get so close to winning a championship and can’t pull it off, but it makes me want to work harder in the offseason to find the little things that can make a difference,” he said. “Same thing with my accident. I just love racing so much that there was a great motivation to work hard and improve.

“I love this sport. Not only do I love driving the car, but I love working on it, too, with our crew. The camaraderie on our team is amazing, guys who have stuck with me through thick and thin. They’re the reason I want to win a championship. They’re why I work so hard.”

Cowie knows all about hard work. The family owns Mundie’s Towing, which his father, Ron, purchased in 1975 as a two-truck operation that has now grown to a fleet of more than 30 trucks that services the town of Burnaby, B.C. Cowie used to man one of the trucks himself and enjoyed helping out people in need, but today manages the entire operation.

The company also was how he first got involved in supercharged alcohol competition. He had been an early member of the NHRA Summit Racing Jr. Drag Racing League in the 1990s but stopped racing to play high school football, where he excelled in a dual-purpose role as running back and outside linebacker on a three-time championship-winning team.

His father’s business, meanwhile, began sponsoring local racer Ralph Pawlik in Division 6’s Top Comp category, which pitted Top Dragster- and Top Sportsman-like cars against one another. In 2000, Cowie inherited the seat of the blown alcohol dragster and, as fate would have it, crashed on his first licensing pass when the throttle stuck.

Undeterred, they repaired the car and went on to enjoy six solid years of competition in the class, but Cowie soon became frustrated with the bracket-racing aspect of the class.

“My goal was always to make the car the fastest one out there and be the No. 1 qualifier, so it was hard to lift and race off of a dial,” he explained. “I wanted to run in a class where the fastest car won. It was obvious that Top Alcohol Dragster was the next step.” 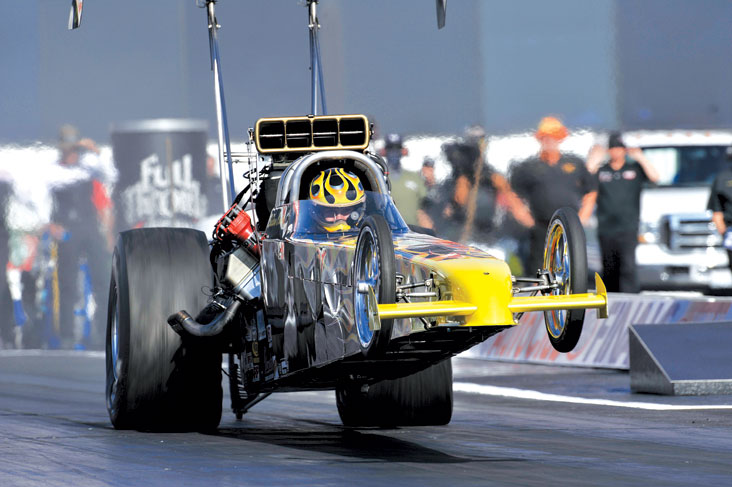 They enlisted the help of Northwest alcohol-racing legend Bucky Austin and bought Hillary Will’s dragster on which Austin had also assisted. Cowie had to learn to transition from the automatic transmission of the Top Comp car to the clutch-launched Top Alcohol car when he debuted in 2007.

Cowie won the Division 6 event in Woodburn, Ore., and the Division 5 event in Topeka, and it took him only two years of racing to reach his first national event final round, in Dallas in 2009, where he lost to Marty Thacker. A few weeks later, he won his first national event at the fall Las Vegas event, stopping Brandon Johnson in the final round.

The following year he won the spring Las Vegas event and scored a pair of runner-ups and added three divisional wins to carry him to an impressive third-place finish behind Chris Demke in the world championship battle. Cowie started out 2011 on fire, winning the Division 7 event in Phoenix and, again, the spring Las Vegas event. The success encouraged the team to follow the tour as it headed east for the next national event, the NHRA Four-wide Nationals in Charlotte.

Little did Cowie know that disaster and a life-changing moment were traveling on that same highway.

And at the end of another long day on the road, Cowie and good friend Nik Duperon stopped in Nashville, Tenn., to see the sights before heading on to Charlotte. It was April 9, 2011.

“We carry our motorcycles with us in the trailer, and we stopped in a Walmart parking lot to unload them so we could go on a little cruise and see the town,” Cowie recalls. “I was just in the wrong place at the wrong time.”

The wrong place was Interstate 40, and the wrong time was as a drunk driver was also on the road and collided with Cowie’s bike from the rear. Cowie never saw it coming, and the impact threw him first onto the hood of the car, then pitched him 100 feet down the highway and 30 feet over the side of a highway embankment.

Cowie suffered a broken neck and back and head injuries, but his right leg took the brunt of the damage. The bones in his foot were severely broken. He was in and out of consciousness for days, and at one point, doctors even considered amputating his mangled leg. 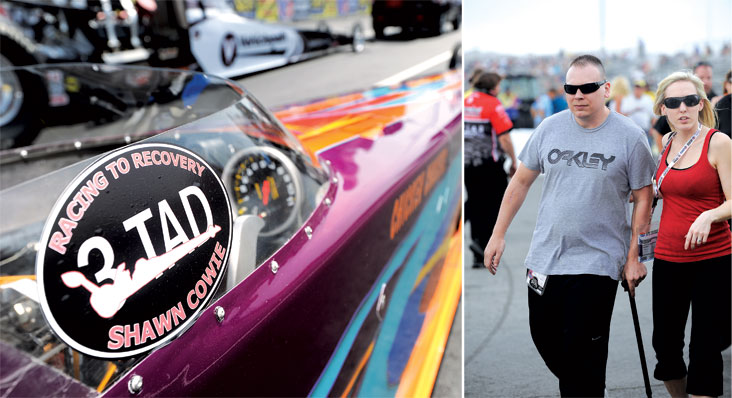 “Amputation was definitely on the table, but the doctors worked with me,” he said. “I chose the long recovery road to keep my leg, and I’m very fortunate that the doctors and nurses were able to save my leg. It was pretty messed up. But it’s still there, and I still get to do what I love.”

He was hospitalized at the Vanderbilt University Medical Center in Nashville for a month, then spent three additional months hospitalized closer to home, at the Royal Columbia Hospital in British Columbia. It took numerous surgeries and months of rehabilitative therapy to progress from wheelchair to crutches to a walking boot before he could get back to the drag races.
It only took one trip back to the track to watch his fellow racers compete at Mission Raceway to know he had to get back into the car.

“When you have racing in your blood, you just want to be out there,” he said. “The injures that I have I still live with daily and became my new ‘normal,’ and you have to adapt to your new normal and plug your way through it.”

Cowie made his return to the cockpit in July 2013 at the Division 6 event at Woodburn Dragstrip in Oregon. Unbelievably, he won that race and followed with another powerful victory a few weeks later at the NHRA Northwest Nationals outside of Seattle.

“When we decided to go to Woodburn, I didn’t want anyone to know we were going; I just wanted to make a few runs to see how my body would feel, and we ended up winning the race, which was unreal.” 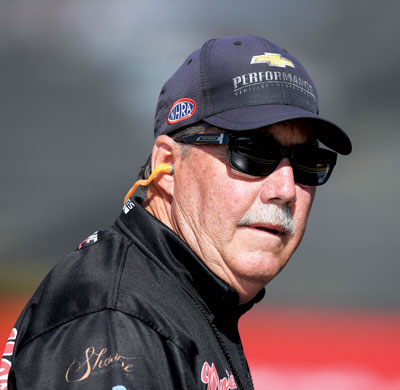 At the end of the 2016 season, Cowie was able to hire Norm Grimes, who had tuned Rick Santos to five straight Top Alcohol Dragster world championships (1997-2001) and also had helped tune Jim Whiteley and Joey Severance to world championships.

Since Grimes took over the tuning, Cowie has won 14 of his last 15 national event finals, including the last 11 straight, and has been in the championship hunt every year. He finished second behind Severance in 2017 and 2018 and second behind Megan Meyer in 2019 and 2020.

The 2020 campaign was tough on everyone thanks to the pandemic, but it presented extra challenges for Cowie, who was denied a border crossing several times due to health regulations.

Regardless, his win at the pre-COVID-19 Winternationals and a clutch late-season win at the delayed Mopar Express Lane NHRA SpringNationals in Houston carried him into the Dodge NHRA Finals in Las Vegas with the points lead and the real possibility of his first championship, but a tough semifinal holeshot loss to Severance put those hopes on the rope.

Meyer needed to win the event to clinch the title while a runner-up would still allow Cowie the chance to regain the lead and the title the following weekend at the regional event in Las Vegas.

Making matters worse for Cowie’s chances was the fact that Severance blew his engine in taking down Cowie and had no spare to face off against Meyer to keep Cowie’s dream alive. 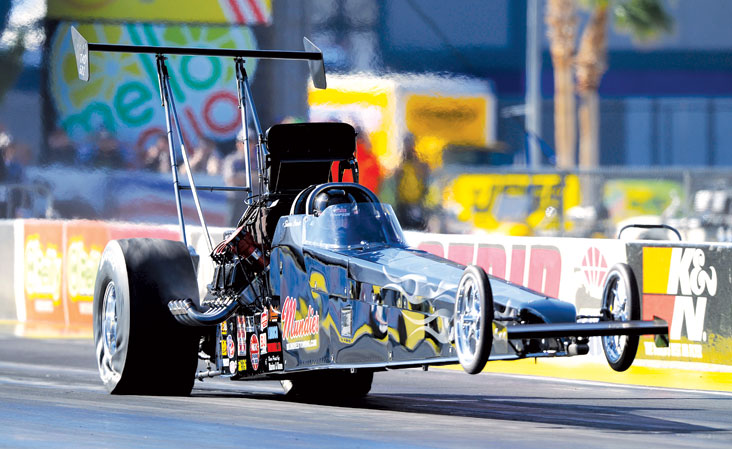 “A couple of racers told me Joey didn’t have an engine and couldn’t make the final round, so I went down and talked to Joey and his dad and told them they could have my complete engine,” said Cowie. “It was pretty cool watching all the teams jump in to help and make a race out of it. They used our whole combination – motor, blower, and fuel system – and their clutch and transmission. Our setups are a little different because their points block and coil are on the other side of the motor from ours, so there were some working challenges, but we got it to the line.”

Severance jumped out to a huge lead on a distracted Meyer and seemed well on the way to extending Cowie’s season when the mighty Hemi went silent a hundred feet downtrack.

“For a second, I thought it might work,” said Cowie, “then about 80-90 feet you could see daylight under the tires, and then the pipes went wet. In the hurry to get everything done, we forgot to check the full-throttle switch. When it left, it didn’t activate all of the timers and just threw the whole timing map out of whack, and it shook like crazy, and I’m pretty sure that the wiring came discontented when it shook so bad.

“All of [the championship runner-ups] sting because they all seem to come down to the last race of the season, but we’re losing to good racers. It’s fun to race them, and it makes me want it that much more. 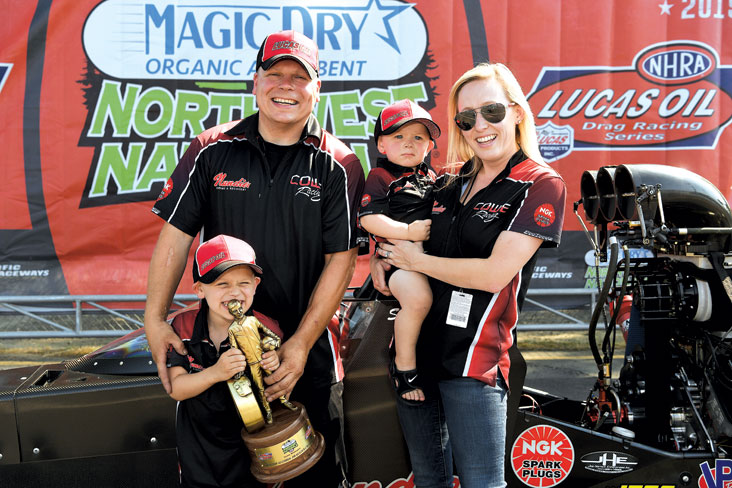 “There have been a lot of people that have helped me over the years to get me to this point in my career.  My sponsors, NGK Spark Plugs and Mundie’s Towing, Bucky Austin, Bill and Shirleen Moore, Harry Campbell, Nik Duperon, Al Stacey, Mike Striha, Kyle Schlotfeldt, Thom Cole, Nick Yates, Jon Phillips, Norm Grimes, my wife, Taylor, my kids, Kaiden and Jackson, and my parents, Ron and Marianne, have made all of this possible.

“My crew guys and the people I’ve surrounded myself with are the reason I’m here. They work their tails off to service the car and make it perfect so that things don’t fall off and spend time away from their families. They’re the guys I want to win it for more than myself. They deserve it.”