Bob McCosh Jr. headed to No Problem Raceway a year ago with a new Top Alcohol Funny Car, eager to put together a new chapter in a racing career that had reached its third act.

But as he arrived at the track to open his 2020 campaign — one that ended as likely the most fulfilling of his career — McCosh could only think of being in his father’s ’62 Chevrolet station wagon, hanging on the back seat while Bob McCosh Sr. started his front-engine dragster. It’s a memory that has stuck with him for more than 50 years and one that came scurrying back as McCosh entered new terrain with a new car and his own team.

The smile on McCosh’s face only got bigger that weekend, too, as he ran 5.511 at 266.98 mph on the first pass. McCosh and his team could only celebrate, and he knew his dad, who passed away in 2013, would be proud.

“It was just incredible. Our first race together as a team last year was in Belle Rose [La.], and it just brought back all those memories racing with Dad,” McCosh said. “You think back to being in the back seat of the station wagon, getting a 50-cent cheeseburger at the concession stand, and it was just amazing.

“We were all jumping up and down, celebrating after that run, and I had a few tears in my eyes thinking about my dad and wishing he could be there.” 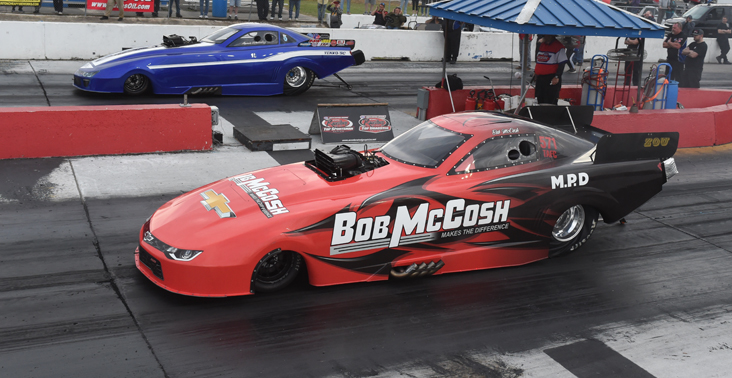 It was just the start of a stellar season for McCosh, who owns Bob McCosh Chevrolet Buick GMC Cadillac in Columbia, Mo. He surprisingly finished fourth in the world championship points, reveling in the new opportunity to run a team. In what was a challenging year for many, McCosh included, because of the COVID-19 pandemic, he thrived on the track, winning a race and advancing to four final rounds, including that opening race in Belle Rose and the season finale at the NHRA national event in Las Vegas.

It far surpassed his wildest dreams, putting together a spectacular year in trying conditions and giving McCosh an added jolt of energy heading into the 2021 opener. His standout year was also a reflection of just how well everything came together — from the car to the team.

“A lesson I learned years ago is you win by preparing before you have the opportunity,” said McCosh, whose victory last year came during the West Central divisional race at Tri-State Raceway in Earlville, Iowa.

“For me, the most satisfying part was watching how elated the crew guys were and how, as a first-year team, they thrived on what they learned. The guys were all committed to doing the best they could, and we had a ton of fun doing it. The energy they created by growing and learning together, that has helped us all in other aspects of life.” 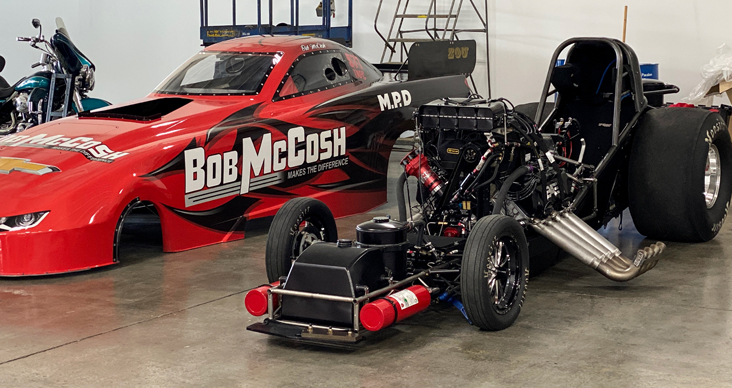 McCosh would be the first to admit the team’s successes on the track paid dividends in running his dealership. It motivated him to keep pushing forward, and McCosh also had to find new and different ways to be successful business-wise.

McCosh had to balance it all but was proud to admit his staff of 176 full- and part-time employees were kept intact during the pandemic, with McCosh learning valuable lessons and approaches to keep his dealership in good shape.

There’s no denying the impact racing had on it all as well.

“For me, the racing gave me new energy, so when I came home, I had to be on task and do what I needed to do to be able to race again,” McCosh said. “That’s something that motivated me.” 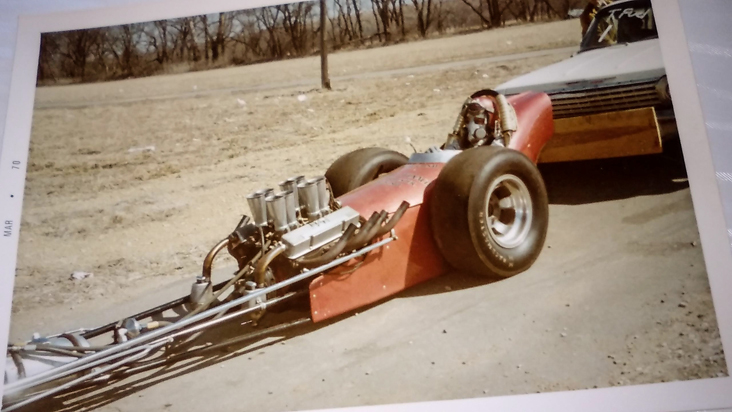 It’s a triumphant third return to the sport for McCosh. He got his start racing with his father, growing up at the dragstrip, fondly recalling his first visit to Indy in 1968 to watch his dad race his B/Fuel-injected front-engine dragster.

Even as a young child, McCosh would crawl underneath the car and drop the oil pan, quickly becoming obsessed with everything racing.

McCosh made his first pass in a Top Alcohol Dragster when he was 15, earning his license and racing in the class when he turned 16. But by the time McCosh was 18, the family stepped away from racing the Alcohol Dragster.

“We were mechanics by trade, and we tried to work on the car at night, but the amount of money it took, it was just difficult to compete at the level we wanted,” McCosh said. “We kicked the rods in Bowling Green [Ky.], and we said we need to quit until we can afford to do it.”

McCosh and his father stepped away, returning in the mid-90s. He listed Fred Mandolini and Frank Hawley as mentors when he returned, racing an Alcohol Dragster with an Oldsmobile motor with Randy Parks. He tested on Mandolini’s dyno in the Chicago area and posted strong results in 1997, going 5.51 at 254 in Dallas, giving McCosh the fastest pass ever by an Oldsmobile running Alcohol.

McCosh ran a handful of events, but his daughter was born in 1998, and growing business opportunities in 2000 meant he had to step away again.

It was nearly for good, too, as the bulk of McCosh’s time was spent building the dealership, eventually buying out all his partners in 2008. 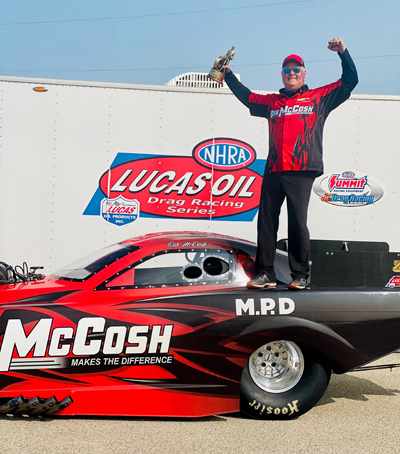 But one day in 2016, he woke up, joked he was “bored,” and decided to make one more run at racing. He stepped back in with another Midwest Alcohol-racing veteran, Fred Hagen, running a handful of races in both 2018 and 2019. As 2019 came to a close, McCosh wanted more than a handful of races, ultimately deciding it was time to build his own team and have his own car.

“I’m not 60 yet, but I’m staring at it, and I have to know when it’s time to say it’s time,” McCosh said. “I think there’s probably three to five years in me that I can go hard, so that’s what we’re going to try.”

From there, the team went to work, putting in ample time to have the car ready for Belle Rose. Everything came to fruition better than he could have expected, capped off by the victory in September in Earlville.

“It’s amazing how much work you put into that quarter-mile run, whether it’s wiring the car, getting everything in place so the timing curve works perfectly, or whatever else,” McCosh said. “Making it all work like it’s supposed to be is pretty daunting, and it takes a lot of time and effort, so when you can do something like [win a race], it’s pretty amazing.”

If anything, though, it’s only pushed McCosh to do even more. He became a contender for a championship on a national level with his breakout season in Top Alcohol Funny Car, challenging the likes of Brian Hough, Sean Bellemeur, and eventual champ Doug Gordon in the title hunt.

He met Bellemeur, who won back-to-back TAFC titles in 2018 and 2019, in the final round in Las Vegas, losing on a holeshot after running a quicker 5.499 at 266.64. It’s a result that has motivated McCosh the entire offseason, and that’s putting it mildly.

“Losing on a holeshot in Vegas, that really burned me,” McCosh said. “He’s the best, and he’s probably the best leaver ever in Alcohol Funny Car history. But that was an opportunity I shouldn’t have missed. 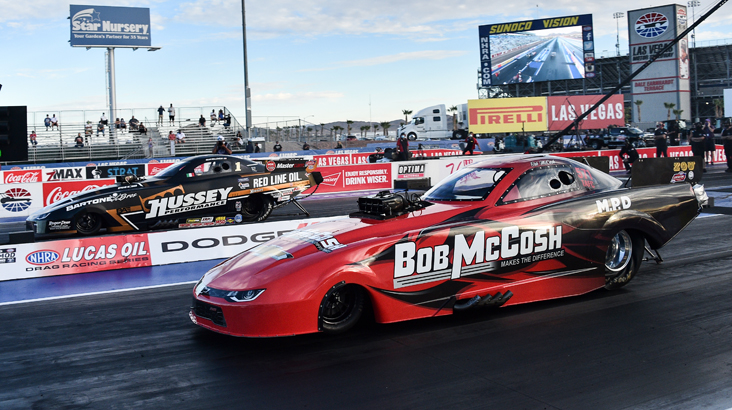 “I’ve probably used the practice Tree 1,000 times since then. With all the hard work the guys put in, I want to make sure I’m not the reason we lose.”

McCosh will get the chance to prove that early and often in 2021, as he has big goals for the season. He chuckled as he joked one of them is beating Bellemeur “every time we line up,” but McCosh is thinking big after his terrific 2020 season.

After several remarkable and consistent performances, McCosh sees no reason why his team can’t improve on that in 2021. If that happens, he makes no secret of his championship aspirations. It brings another smile to McCosh’s face, knowing full well his father is doing the same.

“We’re going to run enough to see if we can win a championship,” McCosh said. “If we get to midseason, and we’re in the top three to four, we’re going to go for it.” 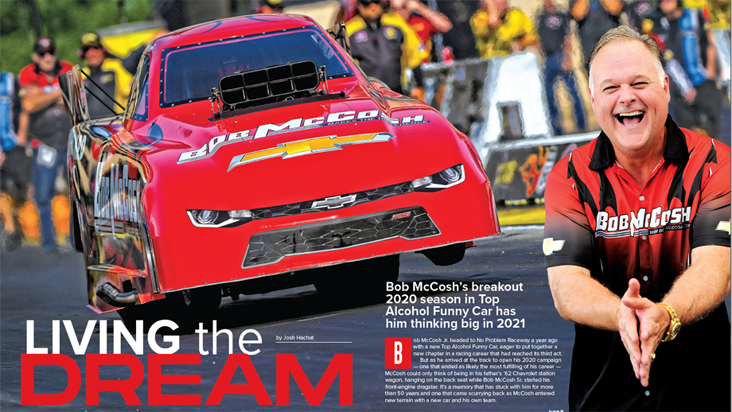