That was then, this is now: A look back at the NHRA season 50 years ago

The 2022 NHRA season is already being hyped by racers and fans alike as a can’t-miss campaign, but let’s turn back the clock exactly 50 years and take a look back at the highlight-filled 1972 season.
28 Jan 2022
Phil Burgess, NHRA National Dragster Editor
DRAGSTER Insider

The 2022 NHRA season is already being hyped by racers and fans alike as a can’t-miss campaign, with new cars, sponsors, teams, and partnerships boosting car counts and intrigue to impressive levels. Because it’s what we do here at the Insider, let’s turn back the clock exactly 50 years and take a look back at the highlight-filled 1972 season.

The national event schedule for 1972 encompassed the same eight events that it did in 1971, but the Springnationals found a new home, moving from the soon-to-be-shuttered Dallas Int'l Motor Speedway to its new home at National Trail Raceway outside of Columbus, Ohio.

Of note was the elimination of the popular but dwindling-in-number Top Gas dragster class (absorbed in Comp eliminator) and a restructuring of the Super Stock and Stock classes.

The Top Fuel national records entering the season were held by Don Garlits (6.26) and Larry Hendrickson (232.55 mph), and both came under assault right off the bat. At Lion's Drag Strip’s Grand Premiere in January, Don "the Snake" Prudhomme uncorked the quickest Top Fuel pass of all time, a controversial 6.174 in his rear-engined “Yellow Feather” dragster to beat John Wiebe’s 6.175 in his front-engined car while Tony Nancy’s ripped to a speed of 233.16, though none were considered new national records because of the event.

A few weeks after that, Garlits ran a 6.15 in the semifinals of his home-state Gatornationals and backed it up with a 6.17 to beat Harris’ 6.24 in the quickest race of all time. "Big Daddy" also blasted to the fastest speed ever, 243.90 mph, in that final-round run to win the Gatornationals for the first time. I’m not sure why, but neither of those were deemed national records.

Harris snatched the “I’m quicker” mantle back in April, running 6.11 at Suffolk Dragway in Virginia, then set the national record at the Division 7 points meet at Lion's Drag Strip in July with a 6.15. At the same time, Billy Tidwell set the speed record at 239.64 in the Rossi & Lisa “flying doorstop.”

Jerry “the King” Ruth was the first to reach the 6.0s, running 6.065 in round two of the U.S. Nationals and 6.071 in the quarterfinals. Ruth ran 6.11 in the semifinals but, perhaps gunning to be the first in the fives, smoked the tires to an 8.79 in the final against Gary Beck.

The five-second barrier did fall, but not to Ruth. Depending on your point of view, it was either “T.V. Tommy” Ivo running 5.97 on Oct. 29 at Keystone Raceway Park in Pennsylvania or Mike Snively three weeks later (Nov. 17) with an identical number on a losing run in the semifinals of the NHRA Supernationals in Ontario. Detractors of the Ivo run point out that his next best run that whole year was in the 6.20s. Don Moody won the Supernationals event with the Walton-Cerny-Moody dragster with an unbelievable 5.91 after earlier passes of 6.00 and a 6.01. Danny Ongais also upped the speed mark at the year’s last event, running 243.24 in the Rossi & Lisa entry. 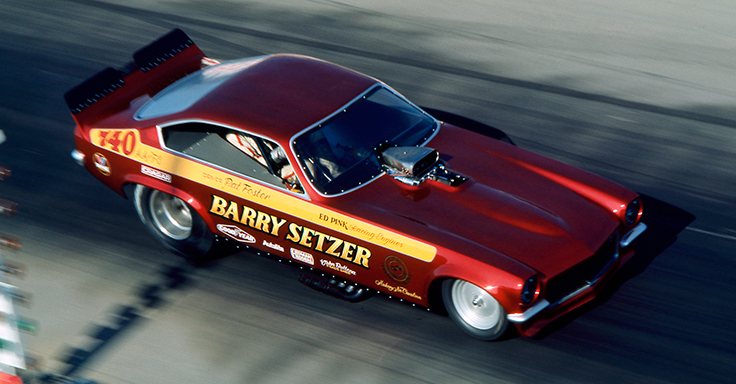 The Funny Car marks also fell, plummeting from the incoming e.t. record of 6.48 set by Bill Leavitt in late 1971 down to Pat Foster’s scintillating 6.29 at the season-ending Supernationals at Ontario Motor Speedway. Along the way, several drivers had bettered Leavitt’s mark, including Ron O’Donnell (6.41), Foster and Larry Fullerton (6.40), and Bobby Rowe and Jim Murphy (6.38). Fullerton (228.42) and Murphy (230.00) had both broken Charlie Allen’s 1971 national record speed of 222.22, but Foster ended up with the speed mark, too, with a 235.64-mph blast in Barry Setzer’s incredible Vega at the Supernationals. 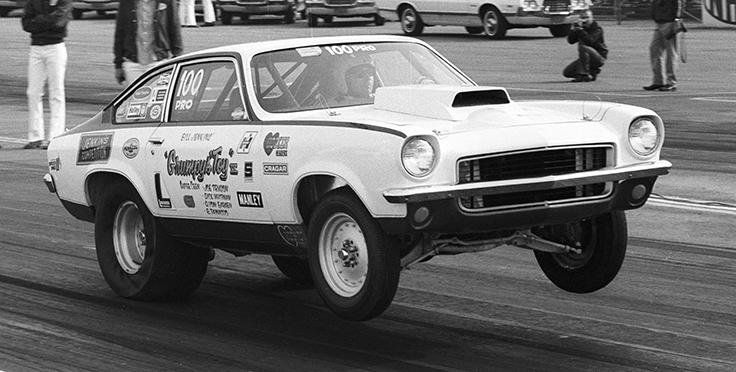 Bill Jenkins took the Pro Stock title at the Winternationals in the debut of his lightweight 332-cid Chevy-powered '72 Vega. Although the production Vega was first made public in 1971, no one really had one on the track until 1972, when the subcompact became a popular choice in both Pro Stock and Funny Car. For a car model so fondly remembered, it only had 11 Pro Stock wins (nine by Jenkins; one by his driver, Larry Lombardo; and one by Ray Allen) and even fewer Funny Car wins (five: Pat Foster, Frank Hall, Gene Snow, Al Segrini, and Jim Liberman). Somehow doesn’t sound right considering that DragList.com has more than 600 Vega Funny Car entries, including more than 60 in 1972 alone, but the scorecard never lies. 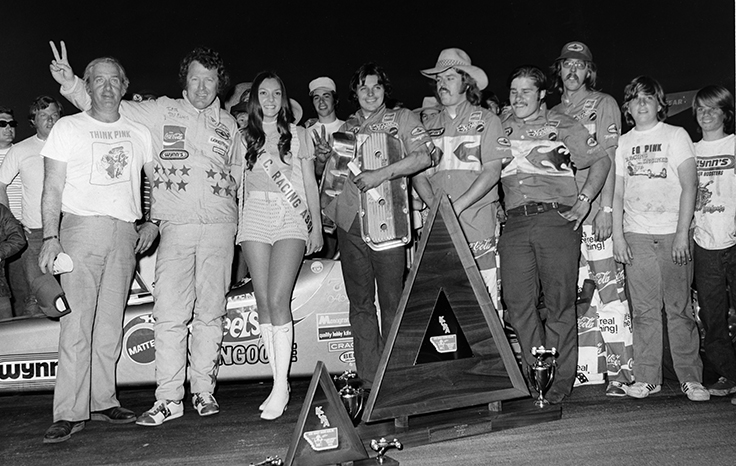 In March, Tom "the Mongoose" McEwen claimed perhaps the biggest win of his career to that point, outlasting a huge field to win the Top Fuel crown at the March Meet, in Bakersfield, Calif., in a Don Garlits-built chassis. 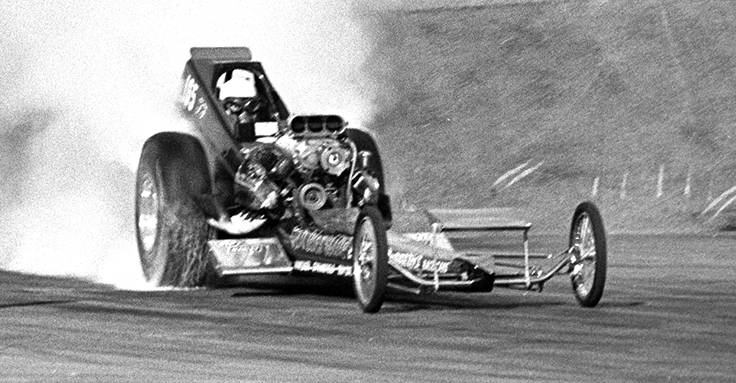 Marshall’s victory was especially memorable as it was the last NHRA national event victory by a front-engined car while Walther’s win earned at the World Finals earned him a surprising world championship. At that same World Finals, Larry Fullerton also scored his first and only NHRA win and also walked away with the Funny Car world championship.

Jeb Allen’s victory at the Summernationals was his first and, at age 18, made him the youngest driver to win an NHRA Professional category. He’d go on to win eight more times and claim the 1981 world championship.

Pro Stock unknown Bob Glidden, competing at his first NHRA national event, took runner-up honors to Jenkins at the Supernationals, actually outrunning “the Grump” but losing on a 9.38 to 9.37 holeshot. 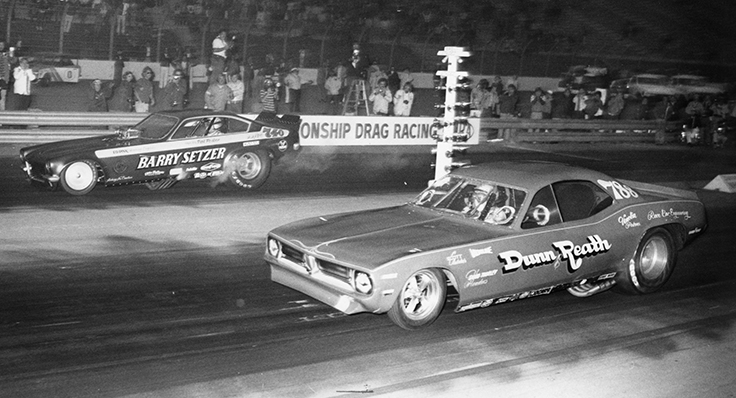 Jim Dunn made Funny Car history at the Supernationals as he became the first (and still only) driver to win Funny car in a rear-engined car, taking the win on Pat Foster’s final-round red-light. It was Dunn’s first victory (but not his last).

McEwen, who grew up just down the road from Lion's Drag Strip in Long Beach, Calif., won the beloved track's Last Drag Race on Dec. 2, beating the new black Snake III Barracuda of Prudhomme in the Funny Car final while Olson, who also owned a long and cherished history at “the Beach,” won Top Fuel over Jeb Allen to put a capper on an amazing season.