This is it. The start of the Countdown to the Championship, where we get to see who’s for real and who has to wait until next year. Obviously, none of the four professional championships will be won at this weekend’s Pep Boys NHRA Nationals in Reading, but it’s certainly possible to lose with an untimely round one loss.

Two weeks ago at Indy, we missed the mark in all four pro categories especially Top Fuel where eventual winner Antron Brown went off at 10-1. We also had Funny Car winner Ron Capps at 5-1, Pro Stock’s Greg Anderson at 6-1, and Pro Stock winner Matt Smith at 5-1.

Obviously, there will be some shuffling of the order this week, but not too much as the drivers we had picked to win Indy remain solid contenders as the tour heads to Reading. For the record, we’re going with Brittany Force, Robert Hight, Erica Enders, and Matt Smith this week. 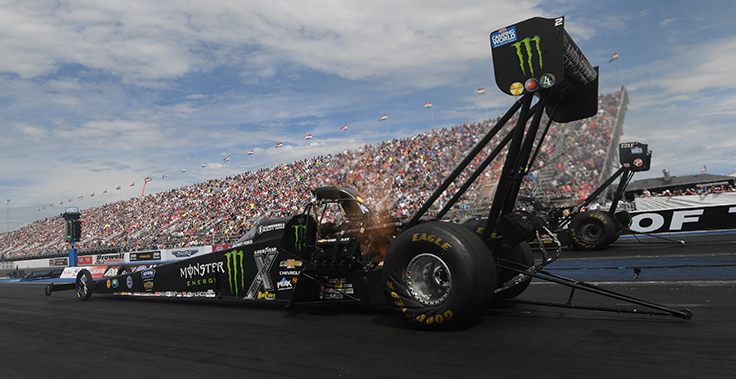 The favorite: The Monster team will tell you they didn’t have a great Indy because they lost in the final round to Antron Brown but other than that, they were pretty impressive. Force made one of the quickest runs of her career with a 3.640 and also set top speed of the meet at 337.75 mph. It’s entirely possible that she runs quicker than that in Reading. Force is also poised to pick up her share of qualifying bonus points, which might ultimately be what decides this year’s title.

The contenders: Remember, this is the Top Fuel class so just about everyone who is entered should be labeled a contender but here’s a few that stand out. First off, Matco Tools driver Antron Brown is definitely back. He didn’t just win Indy; he won with a solid performance that makes one think he’s going to stick around for most if not all of the Countdown.

Naturally, defending world champ Steve Torrence is also among the favorites, especially after his wins in Brainerd and the Pep Boys Allstar Callout. Justin Ashley made the semifinals at Indy and so did Doug Kalitta, who has shown a lot of positive signs lately in his first year with tuners Alan Johnson and Brian Husen.

Mike Salinas, Josh Hart, and Leah Pruett have been relatively quiet the last couple of races but all three should be primed for success in the Countdown. Pruett was among several drivers who tested at Indy before heading to Reading so we’ll if that has a positive impact on the performance of the Dodge Power Brokers team.

The dark horse: This might be a bit of a stretch but Doug Foley seems to have a habit of knocking off tour regulars and since he’s not in the Countdown, he’s likely facing a lot less pressure than his rivals. The conditions in Reading might be similar to what we had in Gainesville earlier this year and if you remember, Foley went to the final of that race. 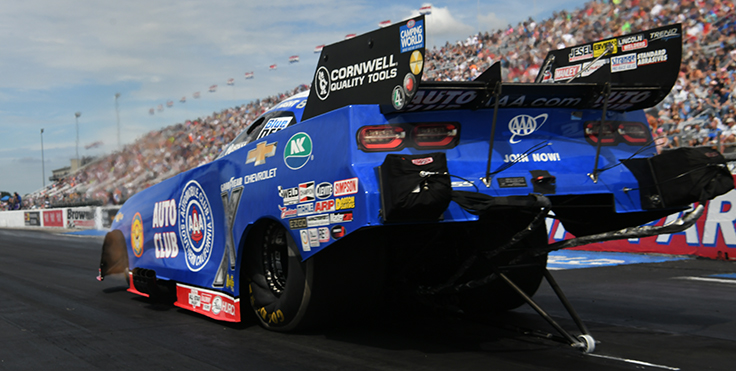 The favorite: This might be the toughest call we have to make as Ron Capps, Bob Tasca III, and Robert Hight could each rightfully claim to be the favorite with Matt Hagan just a fraction behind. It’s practically a coin toss but lets go with Hight if for no other reason than he’s the top seed in the Countdown. Hight also has a bit of history in Reading with a win in 2011 and a runner-up in 2006.

The contenders: Take the drivers we just mentioned; Capps, Tasca, and Hagan, and throw in John Force, J.R. Todd, Alexis DeJoria, and Tim Wilkerson for good measure, and you’ve covered most of the favorites in Funny Car. Todd is an especially intriguing pick simply because he ran a 3.856 in the opening round at Indy that stands as low elapsed time of the event. That might just be a sign that the DHL team is prepared to go on a deep run during the Countdown.

It's also worth noting that Force has been to 16 finals in Reading with seven wins. He’s been a runner-up at the last two NHRA events staged at Maple Grove Raceway.

The dark horse: Cruz Pedregon fits the bill here for a number of reasons. It’s fair to say the Snap-on Dodge has under-performed for most of the season but that doesn’t mean it’s not competitive. Pedregon is the No. 8 seed in the tough field, but he’s just 80 points out of first place after the re-set. If he can pick up just one or two rounds on the leaders, he’ll be in the thick of the fight. Pedregon is also a two-time winner of the Reading event. 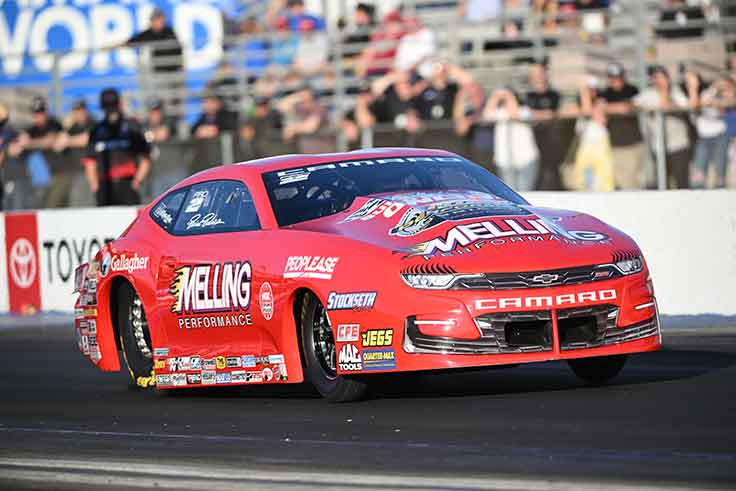 The favorite: Erica Enders didn’t win her third-straight U.S. Nationals title, but that is one of the few things that didn’t go her way during the regular season. Enders won six events to start the season and has the best record of any NHRA pro which makes her the favorite to not only win in Reading, but also to capture her fifth Camping World NHRA Pro Stock title. Enders doesn’t have much history in Reading, other than a runner-up finish last year, but the Elite Camaro has been so dominant for the first 13 races that it’s hard to justify anyone else in this spot.

The Contenders: In a sport where timing is everything, Greg Anderson was right on the money with his 100th career win in Indy. Now that he’s finally got that monkey off his back, he can fully focus on successfully defending his 2021 championship. Anderson’s HendrickCars.com Camaro has seen a noticeable improvement in performance since mid-season and he’s likely to need it to fend off the seven-car fleet of Elite drivers who are also in the mix not to mention his own KB Racing teammates.

Let’s also give some credit to Dallas Glenn, who appears to be making steady progress as well as Aaron Stanfield and Troy Coughlin Jr., each of whom have multiple wins this year and figure to be fighting for the championship right until the end.

The darkhorse: Maybe Cristian or Fernando Cuadra Jr. fits the bill here. Technically, they are both in the running for the championship, although they are both 100 points behind leader Enders so it would take nothing less than a modern miracle to win the title. A championship is almost out of the question but the two Corral Boots teammates can drive, so a race win wouldn’t be a surprise at all. 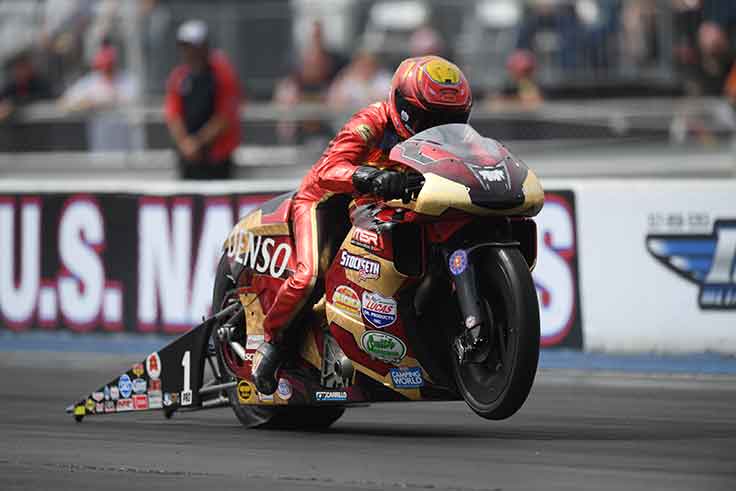 The favorite: It seems to change from week to week in this class but right now, the man of the hour in Pro Stock Motorcycle is Matt Smith. He gets the nod here not just because he won Indy, but also because he’s the most savvy racer in the field and with the Countdown looming, he will likely be at his very best. Smith has made it known that he’ll be racing his Denso Buell for the foreseeable future and if it’s not the quickest bike in the field, it’s darn close. It also happens to be fairly consistent, which is a problem for most of the other title contenders.

The contenders: There is a whole fleet of quick Suzuki bikes chasing Smith this week and that includes Joey Gladstone, Angelle Sampey, Eddie Krawiec, Steve Johnson, Jerry Savoie, and Karen Stoffer. At times this year, each of them have been very quick, but consistency has been an issue. The conditions in Reading are usually favorable to record-setting elapsed times, so it’s likely going to take low 6.7s in order to win this race.

The Suzuki entries aside, Angie Smith remains the quickest rider on a Buell after her performance earlier this year in Gainesville. She’s seventh in the standings, but just three rounds out of the lead so a strong showing here would be a huge plus.

The darkhorse: Earlier this season, Steve Johnson was one of the favorites after winning a pair of races but he’s cooled off a bit since then. Johnson did have a solid outing at Indy and he’s the defending event champ here at Reading, which makes one think there is a chance he does well during the playoffs. More than 35 years into his career, the clock is ticking when it comes to winning a championship.