It’s almost time to crown some champions and what better place to do so than Las Vegas. So far, nothing has been settled but in a couple of cases, the handwriting is clearly on the wall. This week, we've got Brittany Force, Ron Capps, Erica Enders, and Matt Smith as our pre-race favorites.
26 Oct 2022
NHRA National Dragster staff
Tricky Tipster®

It’s almost time to crown some champions and what better place to do so than Las Vegas. So far, nothing has been settled but in a couple of cases, the handwriting is clearly on the wall.

Barring something miraculous, Erica Enders will win her fifth Camping World NHRA Pro Stock title in 2022. Enders has a massive 165 point lead over her teammate, Aaron Stanfield with two events remaining which means she could take the week off, and still roll into Pomona as the points leader. Realistically Enders just needs to qualify for both events to make the title a reality which is why she’s once again our pre-race favorite.

The rest of the championship battles aren’t as clear-cut although Justin Ashley does enjoy a solid 82 point lead over Brittany Force in Top Fuel.

As far as Tipster is concerned, the favorites this week are Force, Capps, Enders, and Smith. 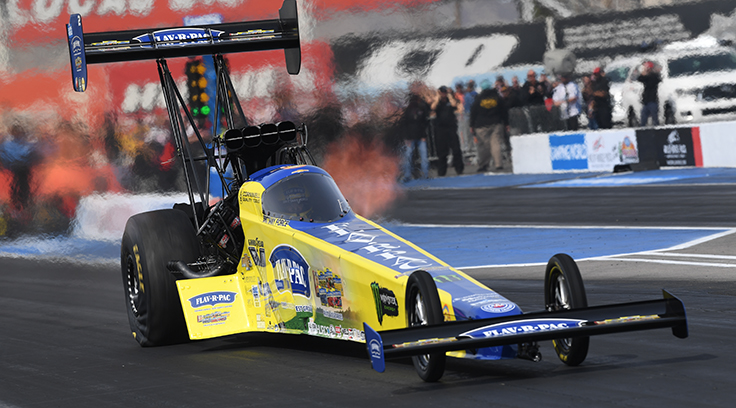 The favorite: It’s now or never for Brittany Force as she needs to take a chunk off of Ashley’s points lead this week in order to take the championship fight to Pomona. The good news is the Force still has arguably the quickest car in the class and she’s got a chance to add some bonus points during qualifying. Force is also the winner of the Four Wide race in Las Vegas last Spring so the Strip has been good to her. With 15 cars currently on the pre-entry list, the low qualifier will get a bye-run which provides a nice bonus for whoever qualifies No. 1.

The contenders: There is a significant difference between those in contention for the championship and those who could win this race. The championship contenders are pretty much limited to Ashley, Force, Antron Brown, Steve Torrence and Mike Salinas with an outside shot. Any one of those drivers can win the race, and the same can be said for Kalitta Motorsports teammates Doug Kalitta and Shawn Langdon, Josh Hart, and Austin Prock. That’s a pretty stacked line-up and everyone mentioned has had their high points this season.

As far as Tipster is concerned, we like the chances of Brown and Torrence getting back into the Title fight while Prock has shown a marked improvement lately.

The dark horse: Maybe it’s time for Clay Millican and the Rick Ware team to step up and have their best outing of the season. Since Ware took over  as team owner, it’s been hard not to notice that crew chief Jim Oberhofer has this car humming. Their performances have been impressive, albeit without the consistency necessary to go deep into Sunday’s final eliminations. The Vegas track is one of the best on the tour, which should prove to be helpful.

The favorite: To rehash our Dallas prediction, this is once again a seriously tough choice because right now, there isn’t much difference between Robert Hight and Ron Capps? Yes, there are others capable of getting the job done, but so far, these two have produced the best results of the season. We called an audible in Dallas and went with Capps and he delivered with a big win so we’re doing with him again but honestly, it’s hard to imagine a scenario where the title isn’t decided until late Sunday in Pomona.

The contenders: He might be a longshot to win the title, but Matt Hagan is certainly capable of winning this race and the same goes for Bob Tasca III, John Force and J.R. Todd, just to name the leading contenders.

Hagan has had his fair share of success at this event including back-to-back victories in 2019-2020 and despite his recent struggles, this is a car that has the ability to dominate.  The same can be said for Tasca, who was nearly unstoppable earlier this season. If the Motorcraft Quicklane team can find the magic they had at mid-season, the complexion of the points battle could easily change heading to Pomona.

The dark horse: Quick trivia question; who won last year’s fall Las Vegas event? If you answered Cruz Pedregon, give yourself a gold star. Pedregon has had a difficult year but all is not lost if he can finish strong, and there is every reason to think he might do just that. The Snap-on team has not been idle this season. Crew chief John Collins continues to search for answers and when he finds them, they’ll contend again.

The favorite: With the championship all but a foregone conclusion, the only question is how badly does Erica Enders want to finish the season by winning out? Of course, she does and she’s got the car to do it right now. It also helps that Las Vegas is easily her most successful track. At some point on Sunday, there is likely to be a stoppage in the action so we can crown our first pro champion of the season and it’s almost certainly going to be Enders.

The Contenders: Before Dallas, we noted that Enders could skip a race and she’d most likely still be the championship leader heading to Las Vegas. That situation is now a reality since second place Aaron Stanfield cannot catch Enders this weekend. Stanfield can, however, win the race and he’s one of the leading contenders to do so.

Let’s also take a stab at Troy Coughlin Jr., who has shown marked improvement this weekend as well as the KB cars of Greg Anderson, Dallas Glenn, Kyle Koretsky, and Matt Hartford. Glenn is definitely someone to watch since he attempted to play the “ladder game” in Dallas and wound up with a tough DNQ as a result. He’ll no doubt be looking to make amends and make them quickly.

The darkhorse: Remember the last time we raced Pro Stock in Las Vegas? It was the Four Wide event in April and Cristian Cuadra was going to win it until his car slowed, allowing Enders to claim the victory. Cuadra hasn’t done much since, but he remains one of the class’ under-rated drivers. With a little luck, he could be in for a long day on Sunday.

The favorite: Two weeks ago in Dallas, no one even remotely thought that Hector Arana Jr. would be the last man standing but that speaks to the unpredictable nature of NHRA’s two-wheel class. Arana not only won in Dallas, but he also picked up the necessary funding to run the final two events in Las Vegas and Pomona, but he’s not the favorite this time, Matt Smith is.

Smith, seeking a record-tying sixth championship, can make some serious progress here if he’s able to win even one more round than his closest rival, Joey Gladstone. Smith has been great at times this year, so he’s our go-to guy this week, but only by a slight margin.

The contenders: At this point, Gladstone has the best chance to catch Smith although Jerry Savoie, Steve Johnson, and Angie Smith are still very much alive in the points chase. Gladstone needs nothing short of a final round here in order to make his title dreams a reality and he’s fully capable of doing just that. He just need to find the same bike that he had at mid-season when he won back-to-back events.

Suzuki riders Savoie and Johnson have been inconsistent at times this season but both ran well in Dallas. Technically, they are both in the championship battle but they’d need for Smith to go out early.

As for Vance & Hines riders Eddie Krawiec and Angelle Sampey, the damage has been entirely self-inflicted. If either rider can overcome their recent starting like woes, they’ve got the bikes to win the race. It’s really that simple.

The darkhorse: After a great start to the season, we haven’t heard much from Marc Ingwersen this year but it was hard not to notice that he ran a 6.82 in Dallas. Granted, he was well off the quick pace set by the leaders, but it does show the power necessary to be competitive. Ingwersen is currently eighth in the championship standings, but seventh is well within reach.