There are just two races remaining before the start of the highly anticipated Countdown to the Championship playoffs, which means the pressure is building for anyone who has a desire to win a NHRA Camping World Drag Racing series title.

Following a scorching hot weekend in Topeka, the series now shifts to the more tolerable climate of Brainerd, which features an abundance of pine trees, freshwater lakes, and, of course, the famed Brainerd "Zoo" campground.

Last week, Antron Brown scored a long overdue win in Top Fuel, and Bob Tasca III continued his recent hot streak in Funny Car. Brown gets a nice boost in this week’s Tipster, and Tasca has taken over the top spot from Robert Hight. Here are the rest of Tricky Tipster’s selections for this week. Enjoy and wager responsibly.

The favorite: Picking a favorite in Top Fuel just got a bit tougher because recent favorite Brittany Force has been off a bit while drivers who previously struggled, including Topeka finalists Brown and Steve Torrence, have begun to rally. To that end, we’re going to take a bit of a gamble here and go with the Capco team simply because they are better than their record has shown, and at some point, the run of bad luck that has kept them out of the winner’s circle will subside. Torrence is also the reigning Brainerd champ.

The contenders: Despite her recent struggles, Brittany Force and the Monster Energy team remain one of the leading contenders, and the same applies to Justin Ashley and Josh Hart, who remain solidly in the top five in the Camping World standings.

That being said, let's take a minute to talk about Topeka winner Antron Brown. Brown admittedly had a bit of luck on his way to his first win as a team owner, but the Matco Tools team has also made significant changes in an effort to improve their performance, and they appear to be working. Brown also has an exemplary record in Brainerd with a win in 2011 and five final rounds.

Mike Salinas has also been relatively quiet lately, but taken as a whole, his 2022 season has been spectacular.

The dark horse: We’re not exactly going out on a limb here, but how about Billy Torrence? He’s only raced a handful of times this year and hasn’t had much success, but much like his son, Steve, he’s overdue. Billy also has a positive history in Brainerd, having won the Lucas Oil NHRA Nationals in 2018. 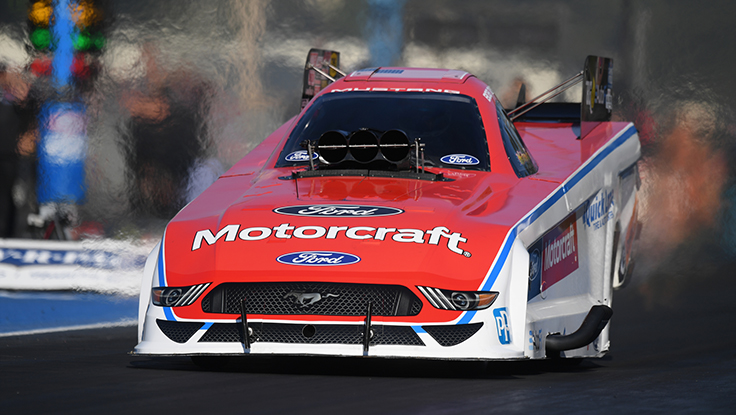 The favorite: Robert Hight had a long run at the top of Tricky Tipster’s Funny Car leaderboard, but he’s been bumped, at least temporarily, by the hottest driver in the class, Bob Tasca III. Over the past few races, Tasca’s Motorcraft/Quicklane Ford has been just about unstoppable with wins in Sonoma and Topeka to go along with final-round finishes in Norwalk and Denver. Since Norwalk, Tasca has improved from No. 8 to No. 5 in the standings, and he might just move up another spot or two before the start of the Countdown.

The contenders: Well, if he’s not the favorite, then Robert Hight should certainly be among the leading contenders for the Brainerd title. Ironically, Hight has been to just one Brainerd final in his career, and that came in 2015, when he defeated Tommy Johnson Jr. in the final. Hight’s Auto Club team can usually get the job done in any condition, but they should thrive in the oxygen-rich atmosphere that surrounds Brainerd Int'l Raceway.

Will the real Matt Hagan please stand up? Hagan was just about unstoppable this spring with three wins in the first eight races, but the Western Swing was a disaster, and Topeka wasn’t much better. Regardless, this is still a championship-caliber team, and at some point, they’re going to snap out of it. Why not Brainerd, where he is the defending champ?

Ron Capps, John Force, and J.R. Todd are also in the “officially overdue” category. All three have been competitive for most of the season, but wins have been a bit hard to come by. Capps has six Brainerd wins, and Force has been to the BIR winner’s circle an amazing 11 times. As for Todd, his DHL Toyota has been much improved lately. He just needs the cards to fall his way in order to show it.

The dark horse: For sentimental reasons, let's go with Bobby Bode because, after all, this is the same event that his father, Bob, famously won in 2010. Honestly, the thought of Bode winning his first event isn’t as much of a stretch as it might seem. This car runs consistent threes almost everywhere it goes, and it wasn’t long ago that he was leading Matt Hagan in the Houston final before his engine expired.