Two races does not a season make, but after successful events in Pomona and Phoenix, we already have somewhat of an idea how the 2022 NHRA Camping World Drag Racing Series season might go.

Robert Hight won back-to-back events in Funny Car, so obviously, he’s the favorite this week as the tour heads to Gainesville. Pro Stock’s Aaron Stanfield is also off to a red-hot start with a win and a runner-up in his Janac Bros. Camaro. Top Fuel is a bit more wide open with Justin Ashley and Mike Salinas splitting the first two events. This week, Tipster is giving Salinas the edge because his Scrappers dragster has also been one of the quickest cars in the field.

The Gainesville race also marks the season opener for the Pro Stock Motorcycle class, and Tipster gives the nod to reigning and five-time world champ Matt Smith, who has been dominant the last few seasons. 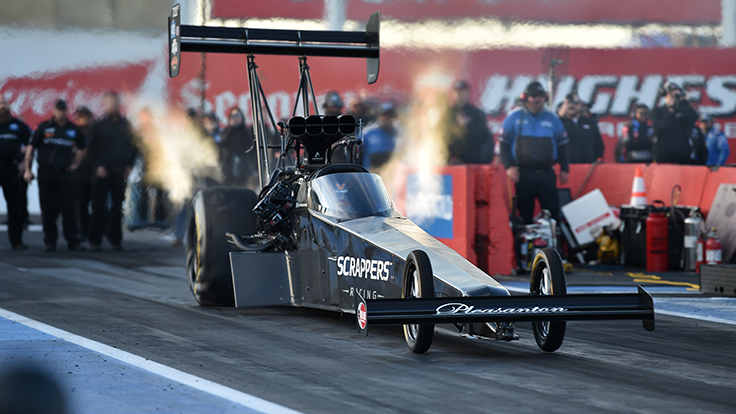 The favorite: If NHRA had an award for the most improved Pro driver, Mike Salinas would likely have won it last season. The Scrappers dragster has been quick for the last few seasons, but Salinas has lately come into his own as a driver and now figures to be one of the most feared racers in the class. New crew chief Rob Flynn also has his stock on the rise as Salinas has qualified no worse than third in the last two events.

The contenders: There are many in Top Fuel, especially because there are more than 20 cars expected to compete in Gainesville, but let us once again start with reigning champ Steve Torrence, who has been a factor at the first two races but has yet to find the winner’s circle. Torrence has won the Gatornationals just once, but that came in 2020 when he defeated his father, Billy, in the final round. Torrence also won that event flying the colors of Hall of Famer “Big Daddy” Don Garlits.

We’re also going to take a close look at the Force team because drivers Brittany Force and Austin Prock have both run well to start the season. Neither has won a race, but that drought could end soon.

Finally, there is Josh Hart, who enjoyed a spectacular Top Fuel debut last season when he won his home event. Hart comes into Gainesville ranked No. 5 in the standings and could easily move up a spot or two.

The dark horse: After a tough 2021 season, Doug Kalitta has started this year with a pair of round-one losses, but his Mac Tools dragster has been one of the performance leaders following the arrival of new tuners Brian Husen and Alan Johnson. Expect them to break out in a big way soon. 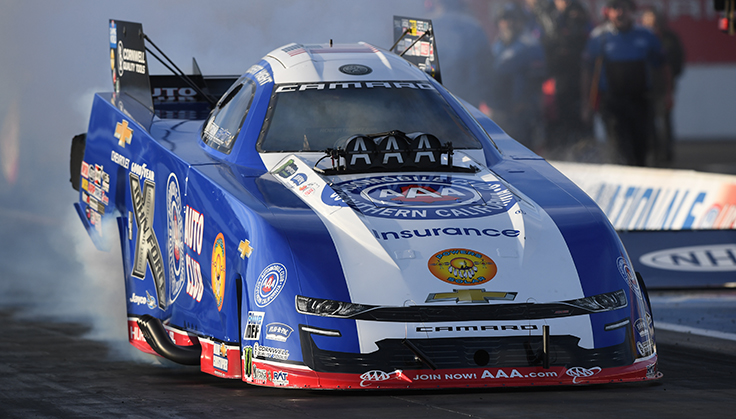 The favorite: Coming into Gainesville with an unblemished 8-0 record, Robert Hight is the undisputed favorite in the Funny Car class. Hight has won the first two races, and it’s not like he had to rely on luck in order to do it. Winning three straight races in Funny Car (or any other Pro class for that matter) is a tall order, but if Hight were able to pull if off, it would not be a huge surprise.

The contenders: Pomona winner Ron Capps has four wins in Gainesville, so it goes without saying that he shines at one of the sport’s biggest events. Capps has made what appears to be a seamless transition from driver to team owner, and the NAPA entry figures to be in the thick of the battle all season long.

Capps’ former teammate, Matt Hagan, is also off to a great start in his first season with the newly formed Tony Stewart Racing team. Hagan has never won in Gainesville, but he was a runner-up here in 2018.

Two other drivers worth mentioning are John Force and J.R. Todd. Force has won everywhere, but he does some of his best work at Gainesville Raceway with eight career wins. Todd is also the defending event champ. In fact, his win here last season was the last victory for a Team Kalitta entry.

The dark horse: Maybe it’s not fair to call him a dark horse, but how about we go with Bob Tasca III, who won the season-ending Auto Club NHRA Finals last season but has started 2021 with a pair of quarterfinal finishes. He is clearly capable of doing more and will almost certainly turn in a better performance this weekend.

The favorite: This is a fairly easy choice because Aaron Stanfield has been the most consistent driver so far this year with a win and a runner-up at the first two events. Stanfield has been a star in the making for the last several seasons, and it appears he’s finally blossomed in Pro Stock. He’s clearly one of the class’ top drivers, and his back-to-back titles in the Constant Aviation NHRA Factory Stock Showdown only add to his credentials.

The contenders: Stanfield’s edge over the field, if it even exists, is slim, and behind him are Erica Enders and Greg Anderson, who have combined for nine NHRA Camping World titles and 133 national event victories. They are clearly the best two racers in the class, and they have each enjoyed success in Gainesville, so it wouldn’t exactly be a surprise if one of them were to win. In fact, it’s entirely possible they meet in Sunday’s final round.

The Pro Stock class is so full of talent that it would be hard to list all of the possible winners, but Kyle Koretsky, Troy Coughlin Jr., Matt Hartford, Dallas Glenn, and the father-son team of Chris and Mason McGaha certainly deserve consideration.

The dark horse: Again, this might not exactly be the definition of a dark horse, but former world champion Bo Butner is our pick this week. Butner certainly knows his way around a Pro Stock car but might still be a bit rusty after sitting out most of the last two seasons. After winning just one round in the first two races, he’s overdue for a bit of good fortune. 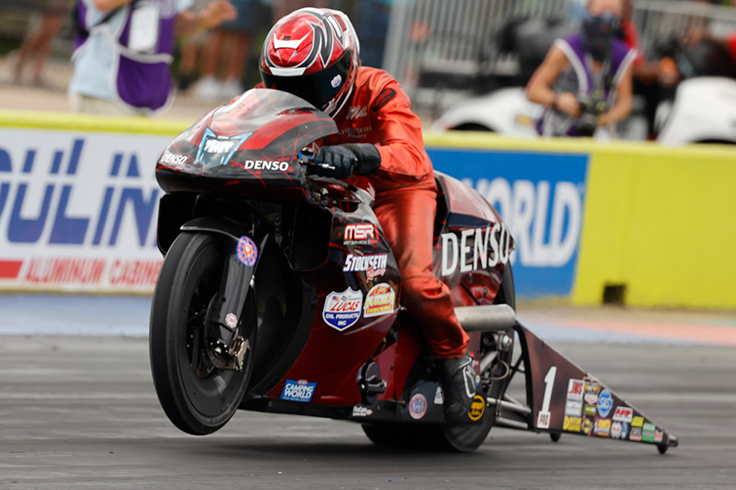 The favorite: All signs point to Matt Smith as the new season kicks off for Pro Stock Motorcycle. Smith is not only the reigning champion, but he’s historically had the quickest, or at least one of the quickest, bikes in the field. It’s not completely clear if Smith will race a Suzuki or a Buell V-Twin in Gainesville, but no matter what, he’s sure to be competitive.

The contenders: The Vance & Hines team can always carry the label of contender, and this year is no different, although the team has undergone a lot of changes this winter. Six-time champion Andrew Hines has been named the new crew chief for the team, which now consists of riders Eddie Krawiec and Angelle Sampey. The Vance & Hines duo have combined for seven world titles, and they both have multiple Gainesville victories, which ranks them among the favorites.

The Suzuki teams figure to be strong in Gainesville with Jerry Savoie, Karen Stoffer, Steve Johnson, and Joey Gladstone among the top title hopefuls. Stoffer is particularly noteworthy as she’s a two-time Gatornationals champion.

The dark horse: Angie Smith has won two races in her career, but in all honesty, she should have a few more. Smith’s Denso Buell is a very quick bike, and when she’s focused, she can ride with the best of them. V-Twin bikes figure to be in the minority this season, but this should easily be the quickest of the bunch.