Brittany Force’s 2022 championship season brought to an end one of the most dominating eras in Top Fuel drag racing as Steve Torrence’s four-year reign as world champion was finally ended. But how does Torrence's streak compare to some of the other great Top Fuel domination in history?
25 Nov 2022
Phil Burgess, NHRA National Dragster Editor
DRAGSTER Insider

Brittany Force’s 2022 championship season brought to an end one of the most dominating eras in Top Fuel drag racing as Steve Torrence’s four-year reign as world champion was finally ended.

In his 2018 through 2021 championship seasons, Torrence scored wins at 35 of the 79 events that NHRA staged (44.3%) and was the runner-up 11 additional times, making for 46 final-round appearances in 79 events (58.2%). The next most prolific winner during those four seasons was Torrence’s father, Billy, who collected eight wins. Outside of the Capco Contractors camp, Doug Kalitta was the most successful with six wins. 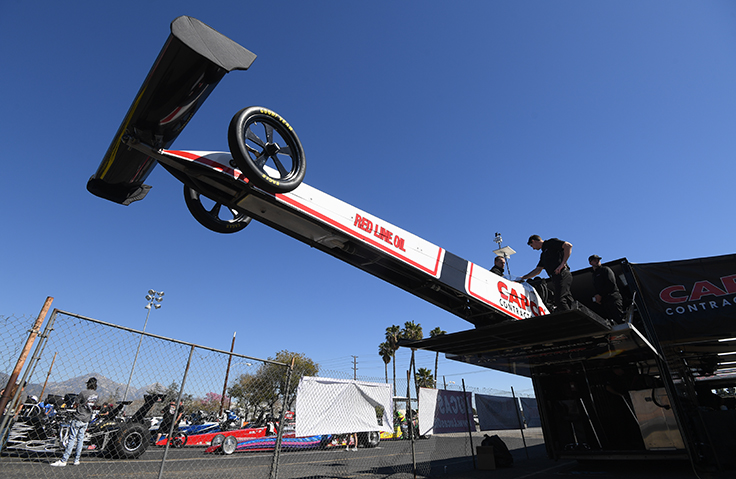 Steve Torrence’s domination compares favorably to the six-year domination of Tony Schumacher, who won six straight championships, 2004-2009. While Schumacher’s 15-win 2008 season is still the benchmark, in any four-year stretch that encompasses that season, Schumacher’s best work was from 2006-09, where he compiled 31 wins in 94 events (32.9%) and 39 finals (41.4%).

Torrence’s four-year run included double-digit victories twice (11 in both 2018 and 2021), and Torrence also is the only driver to sweep all six Countdown to the Championship events (2018). Torrence is just the eighth Pro driver to win four straight championships and just the second in Top Fuel after Schumacher. Pro Stock drivers Bob Glidden and Lee Shepherd and Funny Car drivers Don Prudhomme, Kenny Bernstein, and John Force — Hall of Famers all — are the others to score four.

And let’s not forget Larry Dixon, who won back-to-back championships in 2002-03 in Don Prudhomme's Miller Lite dragster and did it while fighting off a still-growing power in Schumacher. Dixon also had finished second in 2001 and would third in 2003, and then won the championship again in 2010. While Dixon's numbers are impressive unto themselves, they're especially impressive in light of doing it during  Schumacher's long run of success. 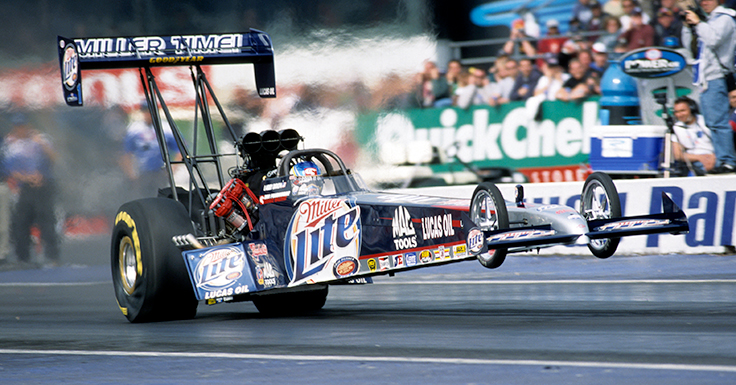 Dixon won 17 times in the 2002-03 era with a consistent win-loss record of 57-13 and 58-14 in those two seasons. Throughout their two long careers, Dixon actually holds a slightly better head-to-head record against Schumacher, 39-36, including 7-3 in 2002 and 6-2 in 2003.  In both of those seasons, he was in first place from the start of the season, when he won the Winternationals, never relinquishing the lead over the course of the season,

I also thought it would be fun (read: labor intensive) to compare Torrence’s domination with a few notable other mini monopolies, including Joe Amato’s three straight championship seasons (1990-92), Don Garlits’ two straight (1985-86), and the tug-of-war for supremacy between Shirley Muldowney and Gary Beck from 1980 through 1983.

Comparing seasons that are decades apart is a little apples and oranges because of the season lengths and the differing competition, but what the hell. Let’s give it a shot.

Amato won 13 times in 55 events over those three championship seasons (just 23%) and also notched 10 runner-ups for a final-round percentage of 41.8, just slightly better than Schumacher.

In the 18-race 1991 season, he scored four wins and four runner-ups and became the first driver to sweep the Western Swing (Denver, Sonoma, Seattle). He qualified No. 1 five times and won Indy for the second straight season, and he went 40-14 (74%). 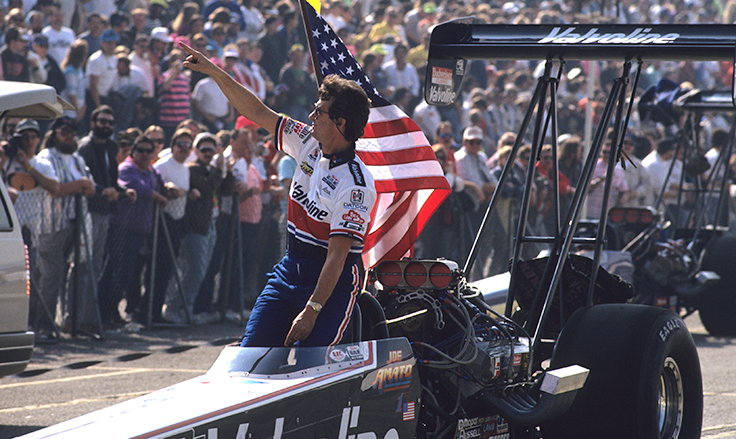 As noted, Amato had just one pole position (Columbus) in 1992 while Cory Mac and Bernstein each scored four and Eddie Hill and Pat Austin three apiece. He had losing records against McCulloch (2-4), Hill (2-3), Prudhomme (0-2), and McClenathan (1-2).

Although Garlits’ championships were just in 1985 and 1986, I’m also going to backdate his records a bit to the 1984 U.S. Nationals, which was the site of the beginning of his comeback. Garlits famously won Indy that year and then went on to also win the World Finals before leaping into a full-time commitment in 1985. 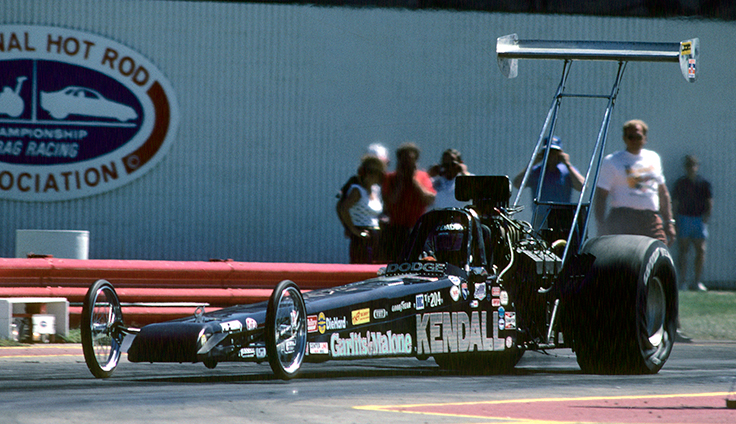 Garlits also set top speed nine times in 1985 with the four-year-old “dinosaur” that was Swamp Rat 26, proving that “the Old Man” still could brew power. 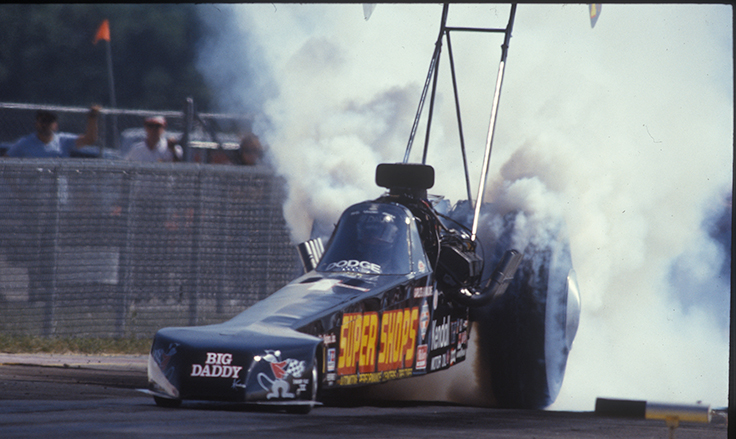 Garlits’ 1986 was also solid with five wins in 14 events in the year that he also introduced his radical Swamp Rat XXX streamliner and broke the 270-mph barrier en route to winning the Gatornationals. He also beat Ormsby in the first all-streamliner Top Fuel final (Cajun Nationals) and won Indy for the eighth and final time, beating Gwynn in the final. He amassed a 31-9 record (77.5%) with three of those losses coming against the kid he called “the Wolf” (Gwynn) and one that wasn’t technically a loss when he couldn’t make the first-round call at the Summernationals after qualifying No. 1 and then suffering a blowover later in qualifying. And, to be fair, one of his other losses came in round one at the next event, in Denver, after he and Herb Parks thrashed to back-half SRXXX. He also set top speed six times.

Muldowney won four of the 10 events in 1980 and compiled an impressive 21-4 win-loss record (84%), but the number is a bit misleading because she didn’t qualify in Denver and didn’t race in Montreal. Beck, meanwhile, went a so-so 15-9 in his get-acquainted first season with team owner Larry Minor and split his two head-to-head meetings with Muldowney, but she closed out the season and the title with clutch wins at the final two events, in Seattle and Ontario.

Despite two wins, Muldowney slipped to fifth in the standings in 1981 while Beck challenged for the championship right up until the final round of the final event at Orange County Int’l Raceway, where Jeb Allen won the championship after Beck fell just a few mph short of setting the national speed record that would have given him the title.

It's surprising that Beck was even in the hunt for the 1981 championship as he didn’t win a round until the fifth race of the season. He lost in round one of the Winternationals, sat out the Gatornationals (back then you didn’t have to run all the races and there were half-point bonus events to fill the gap), DNQ’d in Atlanta, and lost in the first round at the Cajun Nationals, then won the Springnationals. Weird, right? He also DNQ’d later in the year in Denver. Around those setbacks, he racked up a 14-5 round record and also won in Englishtown and at the Finals at OCIR.

Muldowney’s 1981 was just as weird as she bypassed the Cajun Nationals, Mile-High Nationals, and Golden Gate Nationals and DNQ’d in Montreal and put up a 12-5 record when she did make it to eliminations. 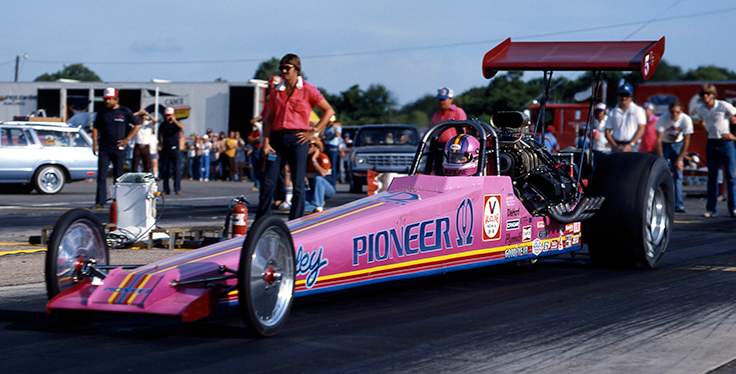 Muldowney won four times and runner-upped on three occasions in 12 events in 1982 en route to her third and final championship, and while there were down points — a DNQ in Fremont and a jaw-tightening loss to Lucille Lee at the non-points-earning but prestigious March Meet chief among them — the rest of the year was a revenge-filled tour de triumph. She won the Gatornationals by defeating longtime adversary Don Garlits in the final, won the Springnationals in a revenge match with Lee, and finally won the U.S. Nationals by defeating bitter rival Connie Kalitta. She compiled an impressive 23-5 round record (82.1%) and was in the final of more than half of the events.

Beck had a forgettable 1982 everywhere but on the scoreboard. For the first time in three years, he didn’t win an event (but had a trio of runner-ups). In a near repeat of 1981, he lost in the first round at each of the four events then took off Montreal, Englishtown, and Denver before returning with a fury in Brainerd, where he qualified No. 1 and was runner-up to Muldowney. At the next event, in Indy, he again set low e.t. with the first round under 5.5 seconds (5.48) and went to the semi’s. He finished with two more runner-ups, in Fremont and at OCIR, and also qualified No. 1 and set low e.t. at both. The magic ingredients? The addition of Bernie Fedderly and his vast clutch expertise to the team, a new Al Swindahl-built car, a wider rim developed by Minor based on his off-road experience that allowed the rear tires to stay flatter, and, of course, a little more horsepower, courtesy of a Beck-designed fuel spool in the Enderle barrel valve and an idle-enrichment program developed by Willie Wolter.

Beck’s late-1982 low e.t. was a preview of 1983, where,  thanks to some refinements to the fuel system — the famed Waterman red pump and a Pete Jackson barrel valve — he made 16 of the 17 quickest runs of the season, capped by dual 5.39s in Fremont and OCIR.  Beck went 11-1 to start the season — following a Winternationals semifinal with wins in Gainesville and Atlanta, then a final-round loss in Baton Rouge, La., against team boss Larry Minor (Beck smoked the tires on a run where Minor was allegedly going to take a knee against him and Minor couldn’t slow down in time) — and won the U.S. Nationals for the third time in his career. He finished the season with an impressive 22-8 record (73.3%) and won the championship by more than 10 rounds over Joe Amato.

Muldowney, meanwhile, bookended her season with wins at the Winternationals and World Finals and was runner-up to season-long nemesis Richard Tharp in Columbus and finished with a respectable 18-9 record (66%).

But back to wrapping up Torrence’s amazing streak. While he did manage to win two events this season (Brainerd and St. Louis), he finished just sixth in the standings — his lowest finish since ending up eighth in 2015, when he won just once.

He struggled against the main challengers to his throne, going 2-3 against Force and a stunning 0-6 against Justin Ashley (yet 4-1 against Mike Salinas), but he also was hamstrung by a new combination that the team was working on developing.

“I think we just experimented too long and dug ourselves such a big hole that we couldn’t dig out,” he said, “but I don’t want to take anything away from Brittany and Grubby [crew chief David Grubnic] and that team. They were bad to the bone all season and deserved to win it all.” 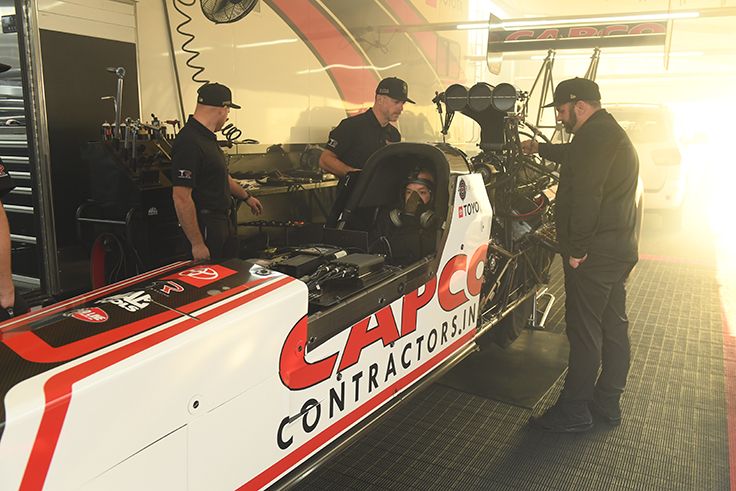 Two of Torrence’s four first-round losses were to giant underdogs — Scott Farley in Epping and Ron August Jr. at the season finale in Pomona, and his loss to August was just salt in the wound as a long day there might have carried him to second place.

“Very frustrating way to end it,” Torrence said, “but it’s kinda how this season’s been.  I’m just glad to get it over with. I’m looking forward to some time away from racing with my family, re-energizing, and then getting back after ‘em next year.

“With the challenges we’ve had with this new [engine/clutch] setup, I couldn’t be more proud of these Capco Boys for keeping us in the game right up to the end.”

Regardless of how his domination ended, it still goes into the record books as one of the great all-time Top Fuel monopolies, standing proudly beside those of other heroes of the sport.

And speaking of standing proudly, on this post-Thanksgiving Day, I wanted to again thank you all for following along as I have spun “the stories behind the stories” of the great history of our sport. I am thankful for the wonderful engagement, encouragement, and amusement that has fostered from our long time together. Thank you, thank you, thank you. I’ll see you next week.