Winter is coming ... and so is another epic chapter of racing in Pomona

Winter is coming. That’s the watchword for Southern California fans as the fabled Winternationals is officially back on the schedule for the last weekend of July. Take a walk back through some other hot Pomona times from the past 60 years.
28 May 2021
Phil Burgess, NHRA National Dragster Editor
DRAGSTER Insider

Winter is coming. That’s the watchword for Southern California fans as the fabled Winternationals is officially back on the schedule for the last weekend of July.

The whole “Winternationals in summer” thing got a lot of internal buzz, with promotional ideas thrown around with a Game of Thrones-reference “Winter is Coming.” My brain kicked into overdrive, Instead of Khaleesi and her dragons, we have Doug Kalitta and his dragsters; instead of Jon Snow, we have John Force. But I digress. 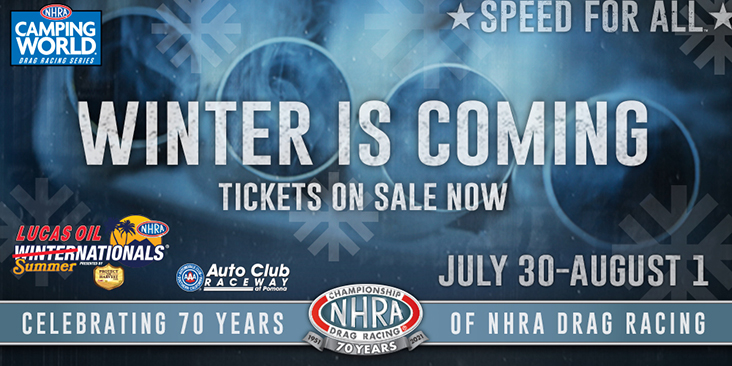 We won’t have dragons (dang), but there will be plenty of fire to go around because we’re going to have nighttime qualifying on both Friday and Saturday plus Cacklefests and fireworks. It’s going to be an amazing affair, one that you’ll want to be able to brag about having been there. [Shameless plug: Get your tickets now!]

Since it joined the schedule in 1961, the Winternationals has unfailingly launched our season and thousands of championship dreams. It was weird enough to contemplate it being held in April, as the season’s third race, as it was originally announced last October, a cautious approach given the unknowns of the pandemic at the time, but in July as Race No. 11? Inconceivable!

But, of course, it’s not the first time that we’ve run in Pomona in the summer. Veteran Pomonaheads well remember 2001, when NHRA staged a summer event, the 50th Anniversary Nationals, in the middle of our yearlong golden-anniversary celebration, which gave a rare chance for someone to win all three Pomona events. 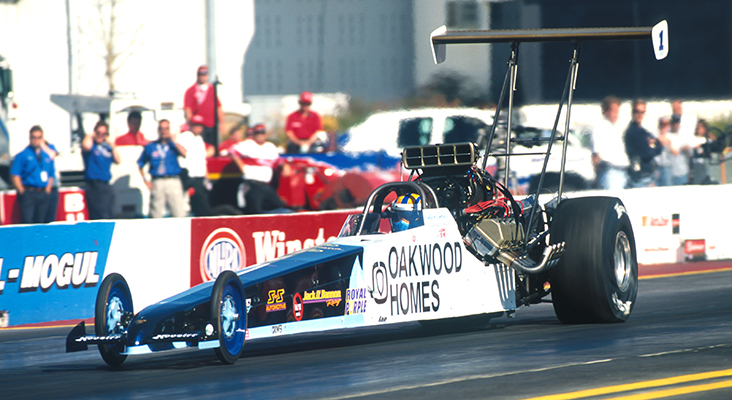 It didn’t happen, although Rick Santos came close in Top Alcohol Dragster (when the class was known as Federal-Mogul Dragster … shudder). The four-time world champ won the Winternationals and the Finals but lost to Brian Hough in the final of the 50th Nats.

Angelle Sampey won Pro Stock Motorcycle at the 50th Nats and the Finals, but bikes, per tradition, did not run the Winternationals.

“Plucky Bucky” (as we at ND — and, apparently, no one else — used to call him) Austin won the first two in TAFC (actually FMFC) and was the best bet for a Pomona sweep when the Finals rolled around. He qualified third at the Finals but got beat on a 5.71 to 5.70 second-round holeshot by Von Smith, and then ended up in the sand trap to pour a little salt in that wound. And let’s not forget that Austin was runner-up at the year’s fourth California event, in Sonoma, where he lost to our current world champ, Doug Gordon, who a week earlier had won his first career event in Seattle, back when the Western Swing went Denver-Seattle-Sonoma (1999-2009) as opposed to the traditional Denver-Sonoma-Seattle trifecta.

(Let’s not even talk about 2010, where it went Seattle-Sonoma-Denver in an attempt to create a sweep back east towards the next event in Brainerd. Good idea. Didn’t work out.)

And now with its new date, the Winternationals is not only in the summer but also the third and final stop of the Western Swing. That just sounds weird.

(As you can clearly see, I’ve drifted way down the Stream of Conscious without a paddle.)

Anyways, it’s a feel-good moment for Southern Californians (and visiting out-of-staters with a hankering for an In-N-Out Double-Double burger; nearby locations right here) to have two events again after last year’s COVID-19 cancellation of the Finals. We’re a bit spoiled, we Angelenos are. We’ve had two NHRA national events within a 50-mile radius as far back as 1970, when the Supernationals debuted in Ontario just a few miles down Interstate 10 from the Pomona track. After Ontario closed in 1980, the Finals went to Orange County Int’l Raceway for three years then to Pomona from 1984 to present.

The first “Big Go West” (the original “Big Go” being the six National Championship Drags held 1955-60) brought Championship Drag Racing to the L.A. County Fairgrounds strip that had opened years before under the control of the Pomona Choppers car club. Check out this classic video:

Jack Chrisman drove the Howard Cams’ twin Chevy-powered “Twin Bears” AA/Dragster to the first Top Eliminator win at the Winternationals. With a makeshift plywood airfoil on the front of the car, Chrisman defeated Tom McEwen for top honors. Chrisman won AA/D class to qualify for the Top Eliminator go by setting a low e.t. of 9 seconds flat and easily defeated McEwen, who had qualified for T.E. by steering Dick Rea's blown Chrysler A/D to a class win and a 9.46-seconds elapsed time. Mickey Thompson won Middle Eliminator with his Pontiac-powered Tempest, and Dick Manz beat Frank Pisano (Joe’s brother) for the Little Eliminator title.

Something “Big” happened here in Top Fuel, and if I have to spell it out for you, well, you must be new here, but the hint is pictured above.

The Funny Car trophy went home with Roland Leong for the second straight year, this time with Butch Maas in the saddle defeating Leroy Goldstein. “Ro” was pretty stout in the first decade of the Winternationals, winning Top Gas in 1964 (Danny Ongais, driver), Top Fuel in 1965 (Don Prudhomme) and ’66 (Mike Snively), and Funny Car in 1970 (Larry Reyes) and ’71 (Maas).

Ronnie Sox won his first of six Pro Stock events this year (but not the championship as he didn’t win the World Finals), beating Wally Booth in the final.

We also lost “Sneaky Pete” Robinson in a horrific qualifying crash. An overwhelmingly tragic end for one of the sport’s early great innovators.

Seven years after director Tobe Hooper scared the bejesus out of us with his horror flick, The Texas Chainsaw Massacre, Pomona had its own version. The roof of Raymond Beadle’s famed Blue Max Funny Car blew off at the finish line on a winning semifinal run, and fellow Texan Kenny Bernstein allowed Beadle to saw the roof off of his Budweiser King entry and graft it to the Max for the final round. Beadle lost the final to another fellow Texan, Billy Meyer, but not for lack of effort.

Jeb Allen beat Marvin Graham to win Top Fuel, and Bob Glidden, back in his good ol’ Ford Fairmont after spending two years in a Plymouth Arrow, beat Pat Musi in the latter’s first national-event final-round appearance. (Musi also would runner-up to frank Iaconio at the Gatornationals a few weeks later and wouldn’t get his long-overdue first Wally until 2010, in Pro Mod in Norwalk.) 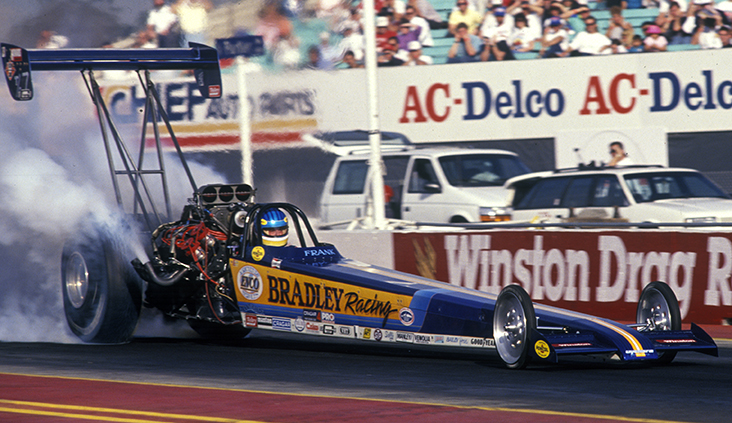 “The Beard,” NorCal Top Fuel favorite Frank Bradley, won his fourth and final Wally at the same place he’d won his first 15 years earlier and did it by beating Don Prudhomme, who was making his first appearance in a Top Fuel final since his return to his fuel dragster roots the previous year. It was also “the Snake’s” first Top Fuel final in Pomona since a runner-up behind John Mulligan at the ’69 Winternationals. Prudhomme would win in Top Fuel later that year, in Columbus over Joe Amato, for his first win in the class since his unforgettable 1970 U.S. Nationals victory.

John Force beat Glenn Mikres to win Funny Car in what, believe it or not, was probably an upset. Although Force entered the year hot off winning his first world championship, Mikres and the Pisano team owned the event, qualifying No. 1 and setting low e.t. and top speed in the semifinals but couldn’t get down the track against Force in the final. 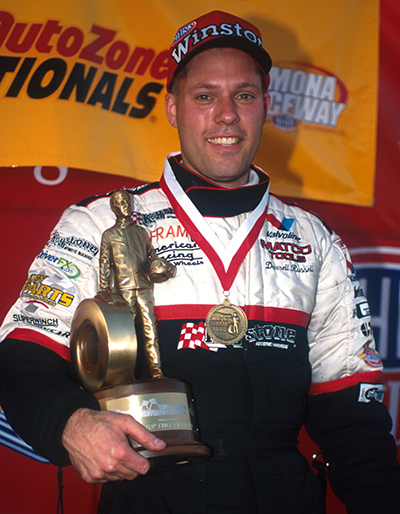 The “first win” theme continued in 2001 when former Top Alcohol Dragster racer Darrell Russell joined Gary Scelzi and K.C. Spurlock as the (then) only drivers to score in their Professional debuts by winning aboard Joe Amato’s Top Fuel dragster with rookie crew chief Jimmy Walsh. Russell defeated Mike Dunn in the final; a few months later, Dunn would beat Russell in the Atlanta final for his 22nd and final NHRA event win.

Russell had already won seven national events in Alcohol Dragster and would go on to win a total of six in Top Fuel before his tragic passing in an accident at the 2004 St. Louis event.

A pair of teammates settled the Top Fuel final with Morgan Lucas, in his Dickie Venables-tuned GEICO entry. besting Shawn Langdon for the win. Langdon, as he usually did (and still does) got out on a holeshot, but the engine went away at the top end. It was the fourth time the teammates had faced one another and the fourth straight win for Lucas.

It was a John Force Racing vs. Don Schumacher Racing, Robert Hight vs. Matt Hagan, for Funny Car honors, and Hight got it done on a 4.05 to 4.02 holeshot for his third of four career Winternationals wins. Jason Line took Pro Stock, defeating four-time Super Stock champ Greg Stanfield, who, like his son, Aaron, today, was pretty good at Pro Stock, too, having won the 2010 U.S. Nationals en route to a second-place championship finish behind Line’s teammate, Greg Anderson.

So, what will the 2021 Winternationals hold? Maybe another first-time winner (Alex Miladinovich? Jason Rupert?) or maybe another all-teammate Top Fuel final (Torrences, anyone?) or maybe John Force will win Funny Car for the eighth time at the event (last win was 2014). I don’t know, but I know I’ll be there watching eagerly as it all unfolds. How about you? As Steve Evans would implore, “Be there!” [Get tickets]