Tricky Tipster: Who wants to be the biggest star in the Lone Star State?

There is a semi-famous quote that says, “There’s no better place than Texas to start over.”  and maybe that's good advice for Tricky Tipster after a tough outing last weekend at the Charlotte Four-Wide race. Sure, he pegged Top Fuel winner Steve Torrence and came close with Pro Mod champion Stevie Jackson, but first-time Pro Stock winner Dallas Glenn and Pro Stock Motorcycle winner Steve Johnson were field bets. Tipster is going to be better this time. Bet on it. 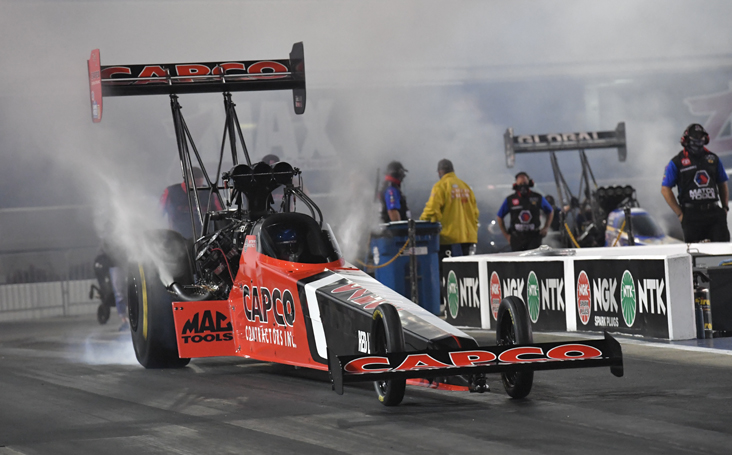 This is the biggest no-brainer of the lot. He’s not only the hottest driver on the tour with two wins and a runner-up in the first four races. He also happens to be a proud Texan who’d love nothing more than to get another win in his home state. Finally, he’d no doubt love to have a do-over for the runner-up finish to Tony Schumacher at the last Houston event. This is his chance and he’s not likely to blow it.
Odds: 5-2

The Matco car isn’t fooling anyone right now. It’s as good as any car in the class and better than most. He also won here in 2008 and 2014 and was a runner-up in 2019 so Houston Raceway Park has been good to him. Looking for a rematch of the Atlanta final against Steve Torrence? You might just get that here.
Odds: 4-1

Last week in Charlotte, the Monster team did just about everything except win the race. They qualified No. 1 and set low E.T. with a 3.66 and also nailed top speed honors at 333.49 mph. On race day, they were just as good with a string of low 3.7s. A 3.72 in the final should have been good enough to get the job done but it came up just short against Torrence’s 3.71. Expect a similar result here.
Odds: 5-1

Three-time Houston winner, including back-to-back in 2015-16, will be sporting a new look this weekend with the traditional Mac Tools colors replaced with Mobil 1 and Toyota Racing Development. Underneath, this is the same steady and consistent team that contends for race wins and championships year after year. So far, he’s winless this season but that probably won’t be the case much longer.
Odds: 6-1

Speaking of drivers who haven’t won yet in 2021 but should, the Capco Captain certainly belongs on that list after an unexpectedly slow start to the season. Much like his son, Steve, he values a win in The Lone Star state as much as any native Texan should. This would be the perfect place to break through.
Odds: 8-1

If there’s one driver who’d like to put last week’s four-wide event in Charlotte in his rearview mirror, it’s this guy who suffered an uncharacteristic round one loss. The good news is that he’s still solidly in the championship battle and would love to gain ground on leader Steve Torrence. That won’t be easy, especially in Texas, but the DHL team should be up to the task.
Odds: 9-1

Let’s be honest for a moment here. No one really thought his Gainesville win was a fluke but just in case there are some cynics left, he back it up with a solid semifinal outing last weekend in Charlotte. In fact, it was more than solid. It was downright impressive. He ran a 3.78 which was the slowest run of the final quad, a perfect illustration of just how tough Top Fuel is right now.
Odds: 10-1

Qualifying results have been excellent, even at the events that feature a shortened two or three-session format, but luck on race day has been nearly non-existent. That being said, there’s too much talent here for this to go on much longer and she does have a 2017 win in Houston to look back on so there is no doubt that sunnier days are ahead.
Odds: 12-1 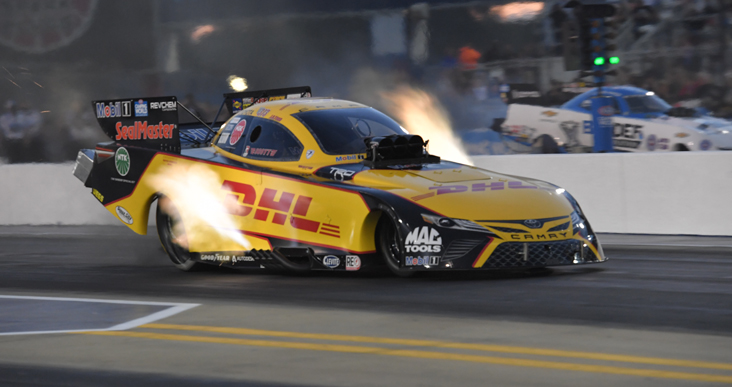 In light of recent events, this was a tough call to make but we went with the DHL car because it has been the most consistent car this year if not the quickest. Runner-up finishes are equal parts rewarding and frustrating, but they also provide a bit of confidence moving forward. Hard to imagine these guys won’t turn on a few win lights this weekend.
Odds: 4-1

The current points leader was almost certainly expecting something better than a round two loss last weekend in Charlotte and quite frankly, they deserved better. The damage could have been much worse although their advantage in the standings has been trimmed to just 17 points.
Odds: 5-1

Public service announcement from Tipster: Never ever, ever underestimate John Force. Okay, so he’s not the same guy he was in the 1990s who could reel off 10-15 wins a season, but he’s still very much a threat to win any race he attends. Last week’s win in Charlotte was a masterpiece complete with low E.T. and top speed of the meet. He’s also got seven prior wins at this track.
Odds: 6-1

He was a Tipster favorite last week but that didn’t work out so well. Of course, he’ll likely go on a tear now and win this race and a couple more. To be certain, there will be a big breakthrough with the Auto Club team at some point, and we likely won’t have to wait much longer to see it. Almost a given he wins one of the next two or three races. Bank on it.
Odds: 7-1

For a guy who tends to win a lot, he hasn’t had much luck in Houston with a single win 11 years ago and a runner-up finish in 2019. Naturally, that could change at any minute. Much like Hight, he’s got the potential to go off for multiple wins at any point.
Odds: 8-1

She didn’t’ just make the final quad in Charlotte, she did it in style with a couple of impressive wins over a very tough field. That might well be the turning point in what is shaping up to be a very promising season. If you’re looking for a good sleeper pick to win a championship, this isn’t a bad bet at all.
Odds: 10-1

His perfect .000 reaction time in the second round of the Charlotte race may have been a fluke, but nothing else about the Snap-on Dodge has been this season. Progress has been steady and impressive with a string of 3.9s that keeps them in contention at every race. Much like DeJoria, this is a single car team that isn’t intimidated by anyone in the class.
Odds: 11-1

First the good news; he’s had some success at Houston Raceway Park with four wins in six final rounds including a runner-up last September. On the flip side, the NAPA team’s only positive result of the season so far has been a semifinal finish at the Las Vegas Four Wide race. That being said, we’re only four races into what promises to be a long season so there is plenty of time to right the ship.
Odds: 13-1 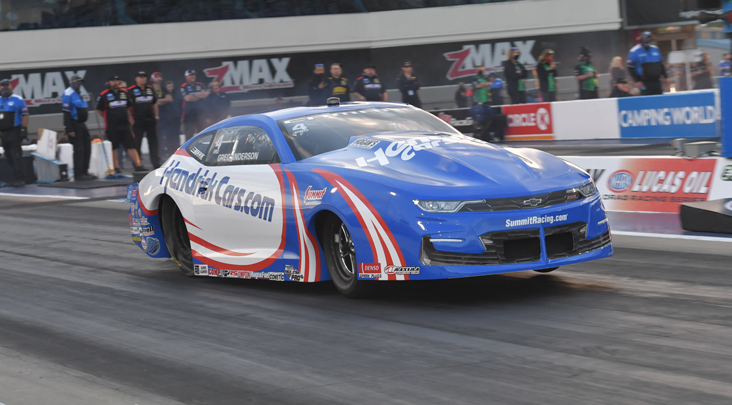 Another race, another low qualifier and low elapsed time so even if the final result wasn’t what he was looking for, the performance is there. Not be belabor the point, but the competition level in Pro Stock is insane right now with at least 12-14 cars capable of winning. This just happens to be the best one right now albeit by a fraction. He also happens to be a three time Houston winner.
Odds: 3-1

If you gave her a choice between winning in Indy or winning her home event in Houston, she might have to flip a coin. Then again, who says you can’t win both in the same season. Back-to-back Houston wins in 2014-15 remain a career highlight and after a tough weekend in Charlotte, the Elite team will certainly look ahead to better days.
Odds: 4-1

He’s making it easy to forget that he’s only 19 and has got less than one full year’s worth of experience in the Pro Stock car and had almost no experience before that. Quite frankly, he looks like he’s been doing this at a high level for a year and no one will be shocked if he emerges as NHRA’s next first-time pro winner. And no one should be shocked if it happens this weekend.
Odds: 6-1

Okay, admit it; six months ago, only the most hardcore NHRA Pro Stock fans had even heard of Dallas Glenn. Now, he’s a national event winner in drag racing’s most competitive class. His lights have been exemplary since he began the licensing process last winter and they paid off in a big way in Charlotte. Obviously, he’s been paying attention during multiple years as a Pro Stock crewmember.
Odds: 7-1

The last time he races in Houston, he put together one of the most inspiring performances in NHRA history with a Pro Stock win and a Factory Stock victory that sealed a championship. He might not be as impressive this time around but it's not out of the question that he leaves Houston Raceway Park with at least one more Wally in either class.
Odds: 8-1

Another couple thousandths of a second in either reaction time or elapsed time, and he’s your next first-time Pro winner. That’s a small example of just how insane the level of competition is in Pro Stock right now. Sooner or later, the close ones will begin to fall in his favor.
Odds: 10-1

Last week’s Charlotte race was a big disappointment, but the bright side is that the Get Biofuels team is currently in the thick of the Pro Stock points battle. In order to stay there, they’re going to have to win some rounds, and it would be wise to start doing so as soon as possible.
Odds: 11-1

First off, we’ve got to wonder if he’s as much in awe of his son, Mason, as the rest of us are. Secondly, is it fair to ask how much he still wants to win give the success of the Harlow Sammons team’s second entry? For a guy who probably grew up watching Warren and Kurt Johnson race in a number of father/son final rounds, I think we know what his ultimate goal is.
Odds: 13-1