It’s been a long two years, but the Camping World NHRA Drag Racing tour is finally headed back to middle America for this weekend’s Menards NHRA Nationals presented by PetArmor. The event marks the first time NHRA pros have visited Heartland Motorsports Park since the 2019 season due to the COVID-19 pandemic.

A lot has changed in two years but there’s also a lot that has remained the same such as Steve Torrence’s continued domination of the Top Fuel class. Torrence won the last time we raced in Topeka and he’s the favorite again this weekend along with Robert Hight in Funny Car and Greg Anderson in Pro Stock. 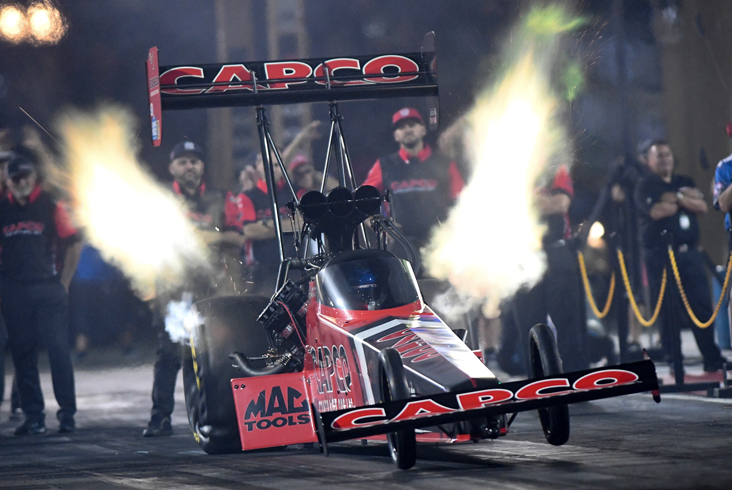 The current points leader didn’t sweep the Western Swing, but he did go two-for-three to extend his advantage over the rest of the field. Now, the tour returns to Topeka where he is technically the defending event champion as well as the 2017 runner-up. Torrence has lost just four times this year in 32 rounds. That easily makes him the biggest favorite in the field.
Odds: Even

As we just noted, leader Steve Torrence has lost just four rounds this season but guess who is the only driver to beat him twice? Yep, it’s his old buddy Antron, who is also having a pretty decent season of his own. Brown went to back-to-back finals in Topeka in 2016-17 with a win at the latter event. He’s more than capable of doing that again.
Odds: 4-1

The Capco captain took a breather from the Camping World tour but still managed to win a race in his Super Comp dragster so he’s going to be far from rusty. It’s also worth noting that one of his most recent appearances came in Epping, where he ran the table by qualifying No. 1 and winning the event.
Odds: 5-1

Okay, we’ll call it this time. The Mopar team is back in business and they’ve gotten a big bump from Tipster following their successful Western Swing that included a runner-up in Sonoma and a much-needed win in Pomona. The fact that they went to back-to-back finals is one thing, but they did it with a solid performance in both qualifying and eliminations. If they didn’t have the best car in the field it was darn close.
Odds: 7-1

Maybe a bit of a stretch here but Tipster has the feeling that the Scrappers team is overdue for a big showing. That’s more than just a hunch since they qualified third, fifth, and third in the three Swing events and finished with a pair of semifinals. They’ve also moved from No. 11 to No. 6 in the points since Epping.
Odds: 8-1

First, the good news; the Monster team swept qualifying at all three swing races with a 3.69 in Sonoma and a pair of 3.71s in Denver and Pomona. Now, the tough part; Sunday netted three straight quarterfinal losses. Obviously, this car can deliver amazing performances at any time so the wins will come. It’s just a matter of when.
Odds: 9-1

Something has got to give here and soon because this is the most un-Kalitta-like year of his career. Ten races in, we’ve come to expect more than two runner-up finishes but the good news is that there is still some time to right the ship before the start of the Countdown. He’s got two wins in Topeka and this track has historically been good to the Kalitta team so this would be the perfect place to turn things around.
Odds: 10-1

The Strutmasters team got a lot of credit for skipping the Pomona final when they had a driver who was clearly not healthy enough to race and rightfully so. Now, they’ve got a perfect chance to make up for it with another solid outing here. It’s likely to be hot again on race day, but they’ll undoubtedly be better prepared for it.
Odds: 12-1 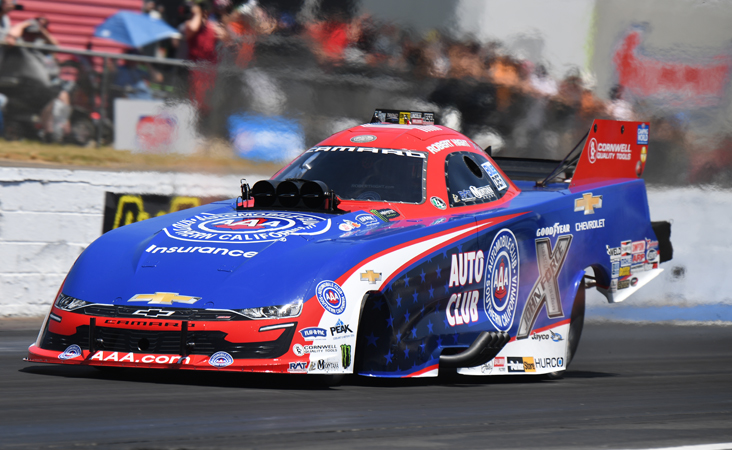 The Auto Club team has won in Topeka three times including the most recent event in 2019. On top of that, they’ve got a pair of runner-up finishes. There isn’t much separation at the top of the Funny Car field, especially among the best six cars but in this case, we’re going to give the newlywed a slight edge.
Odds: 4-1

Two semifinals and a big win in Pomona and just like that, the NAPA Dodge team has climbed from fifth to first place in the Camping World Funny Car standings. Now, the big question is, can they stay there? Of course, they can and with four Topeka wins to fall back on, there is every chance they could extend their lead this weekend.
Odds: 5-1

A 6-3 record on the Swing was probably not exactly what the Bandero team was looking for but they’ve been steadily building up to something good this season and it wouldn’t surprise anyone if they had a monster second half. We really like their results in qualifying where they are No. 6 or better in nine of ten events so far this season. That tends to make life easier on race day.
Odds: 6-1

The Western Swing started with so much promise with a win in Denver and a runner-up in Sonoma but it ended with a giant thud following a rare round one loss in Pomona. Honestly, that should be little more than a speedbump for a team that generally contends for wins on a weekly basis. He’s also got a history in Topeka with a win in 2016 and a runner-up in 2017.
Odds: 7-1

For the first time since Las Vegas in March, the Motorcraft team is not leading the points following a tough weekend in Pomona. The big question now is how will they respond. The good news is they only need to make up five points on current leader Capps and that can be done in one round of qualifying. Expect to see a very quick rebound here.
Odds: 8-1

Nobody likes losing a final but even a runner-up in Pomona had to feel good for the DHL crew after a tough start to the Western Swing. Conditions in Topeka likely won’t be too much different than what we had in Pomona so it’s reasonable to expect a couple more win lights here. For all their troubles, they do have a win in three final rounds in the first ten events of 2021.
Odds: 9-1

Heartland Motorsports Park is another track that has historically been good to the 16-time champ with nine wins in 15 final rounds since the inaugural event here in 1989. He’s also coming off a solid race in Pomona where he came from the No. 12 qualifying spot to ambush Matt Hagan in round one and then stop old rival Cruz Pedregon in the quarterfinals.
Odds: 10-1

A two-time finalist in Topeka, he’s comping off a tough race in Pomona, but lately, the LRS team has done well, particularly in qualifying. They’ve been to four semifinals this season and it doesn’t take a lot of imagination to see them going to a final in the near future. All they need is a break or two.
Odds: 12-1 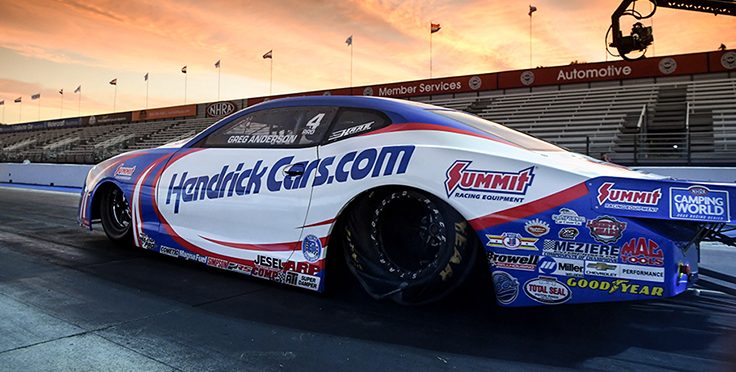 We’re going to leave him at No. 1 (for now) because he continues to dominate in qualifying and he is the current points leader and he’s still winning rounds. That being said, he’s lost to Aaron Stanfield in three of his last four events and there is no doubt that the tide is turning in the Pro Stock class.
Odds: 3-1

When he jumped into Pro Stock a few years ago we all knew this kid would be good and now he’s fulfilling those expectations with wins in three of the last four events. Much like his dad, he never seems to get rattled and somehow finds a way to get the job done.
Odds: 4-1

Remember the last time we ran Pro Stock in Topeka? It was 2018 and the four-time champ narrowly avoided a disaster during Pro Mod eliminations and came back to post a runner-up in Pro Stock against Deric Kramer. Hopefully, there won’t be nearly that much drama this year.
Odds: 5-1

We’ll stick with the Total Seal team for the No. 4 spot this week because, well they are ranked No. 4 in the Camping World standings and can legitimately claim to have a top-four car in a class that is often separated by thousandths. Lately, their results have been solid with two quarterfinals and a semifinal in Norwalk. That’s decent, but they can do better.
Odds: 6-1

So far, he’s got 17 races under his belt in a Pro Stock car and has a runner-up and four semifinals which isn’t too shabby considering the level of competition he’s facing. Obviously, the next step is a victory and we’re betting he gets one (or more) before the end of the season. Honestly, there is no reason why it couldn’t happen right here.
Odds: 7-1

Driving a Pro Stock car is hard. Winning in a Pro Stock car is even more difficult, but he’s made it look relatively easy this season. That being said, there have been a few rough spots including the last race in Pomona where he struggled in qualifying and paid the price for it in round one with a tough loss to Kyle Koretsky. Those things happen from time to time. No reason to panic here.
Odds: 8-1

It’s pretty easy to get frustrated in this class because even the best teams struggle from time to time but we’ve all seen flashes of brilliance from this kid and it's just a matter of time before the planets align for his first pro win. It might be taking a bit longer than he’d wanted, but it’s coming.
Odds: 10-1

The Harlow Sammons team gets a boost this weekend with the return of their leader, Lester. That figures to provide both a spark and an emotional lift following a tough stretch. Ironically, Mason’s career statistics match fellow young gun Kyle Koretsky’s with a win and four semifinals in 17-career Pro Stock events.
Odds: 12-1