The Countdown to the Championship moves to the Lonestar State this weekend with the annual Texas NHRA Fall Nationals from the Texas Motorplex outside of Dallas. The event marks the fourth event in the NHRA playoffs, meaning the battles for Camping World NHRA pro titles are heating up.

This is pretty much an open and shut case. He won the last race in St. Louis. He’s the incoming points leader. He’s got nine wins already this season and yes, he’s also a native Texan. As if that wasn’t enough, he is also the defending event winner. One might remember the father-son all Capco final last year between Billy and Steve.
Odds: 3-1

Her No. 1 qualifying streak ended a couple weeks ago in St. Louis but that’s not the important thing. Right now, all that matters is winning rounds and collecting points. Currently the Monster team is 36 points out of first place and that’s manageable. With three races left after this one, they can’t afford to fall any further behind. A win here would be huge for their chances.
Odds: 4-1

He’s been to the final round here for the last two seasons with a victory in 2019 so one gets the idea that he’s very comfortable racing in his home state. It’s also worth mentioning that he is the No. 3 ranked driver in the class and he’s very much alive in the battle for the Top Fuel championship.
Odds: 6-1

We’re not sure that most people fully appreciate what he’s done this year. Winning in Gainesville was a bit of a shock, but since then, he’s continued to impress with a second victory in Charlotte and three semifinals including St. Louis. Remember, this is a guy who is about to make his 10th start in a Top Fuel car.
Odds: 7-1

It might be a bit premature to say this, but something clicked in St. Louis with the Scrappers team. Not only did they have one of the quickest cars on the property, but they raced with a lot of confidence on Sunday and very nearly came away with their first win of the season. It will be interesting to see if that momentum carries over here.
Odds: 8-1

Is it possible to make up 151 points in four races? Well, as a matter of fact it is, but it won’t be easy especially since the Mopar team will have to climb over five other drivers in order to take the top spot. Before we get ahead of ourselves, a win here could potentially cut the deficit to a much more manageable level and that’s what they should be focused on.
Odds: 9-1

Having secured the services of crew chief Mike Green for the 2022 season, the Davis Motorsports team can get back to the business of chasing a championship. They are currently 138 points back so they’d likely need for the leaders to stumble, but a final round finish here would certainly shake things up.
Odds: 10-1

For the record, Tipster doesn’t like having the Matco team ranked this low but it’s a testament to the competitiveness of the Top Fuel field that a car this good can be No. 8. The bottom line is that they haven’t been to the semifinals since Pomona in July so they are long overdue for a big Sunday showing.
Odds: 11-1 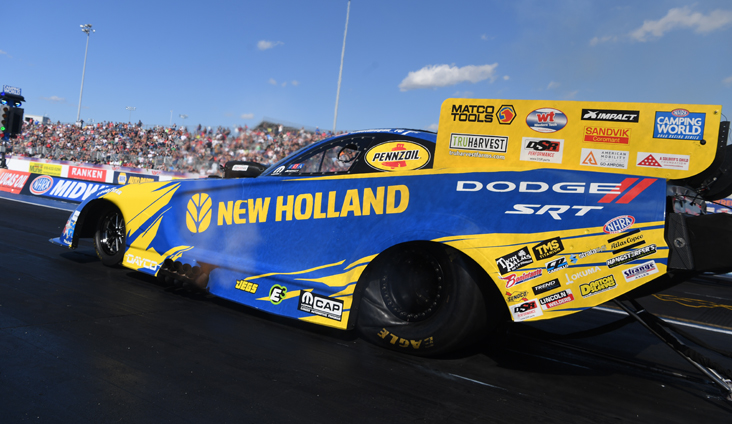 Returning from a bout with Covid, we weren’t sure exactly which version of Hagan we were going to get in St. Louis but he clearly was feeling good after winning his third event of the season and re-taking the points lead. A three-time winner in Dallas and a runner-up last year, he’s got a chance to put a hammerlock on this deal with another victory.
Odds: 3-1

The 16-time champ’s love-hate relationship with the Texas Motorplex has been well documented but we prefer to dwell on the positive which includes seven wins in a staggering 15 final rounds since the track opened in 1986. As for the championship, he’s 72 points back so it would be beneficial to pick up a round or two on the leaders.
Odds: 4-1

Losing in the quarterfinals in St. Louis wasn’t great, but the damage could have been much worse. The NAPA team is 59 points back and that isn’t too tall of a mountain to climb with four events remaining. Worth noting that he has just one win here, at the spring event in 1998 but he’s been to the final round on three other occasions.
Odds: 5-1

He needed a big weekend in order to save his season and he got it in St. Louis with a runner-up finish. It’s not as good as a win but it has kept the Motorcraft team in the hunt for the title. Getting to the final was great, but they also looked very strong in doing so which should provide some optimism going forward.
Odds: 6-1

The Snap-on team made runs during Wednesday’s Stampede of Speed test session on Wednesday so they should be well prepared for the battle that is ahead of them this weekend. Technically, they are still very much in the running for the championship. In fact, he overcame much longer odds to win his first title in 1992.
Odds: 7-1

Lately, nothing has gone right for the Auto Club team including their disastrous opening round loss to their teammate in St. Louis. That one stung for a number of reasons. Now, they can focus on the Dallas event, which they’ve won four times since 2006. They need to make up 160 points in four races, that equates to two rounds per event. It’s time to swing for the fences.
Odds: 9-1

The good news is that the DHL guys haven’t lost in the first round since Denver but we’re at a point in the season where anything less than a final round is not acceptable. This is a team that’s been to four finals this season and they are more than capable of doing so here.
Odds: 10-1

In Charlotte, he was able to win from the No. 8 spot which is not an easy feat in this class. He also qualified No. 8 in St. Louis and that led to a round one loss. The Levi, Ray, and Shoup car has qualified as high as No. 3 this season on four occasions which tends to make things easier on Sunday.
Odds: 12-1 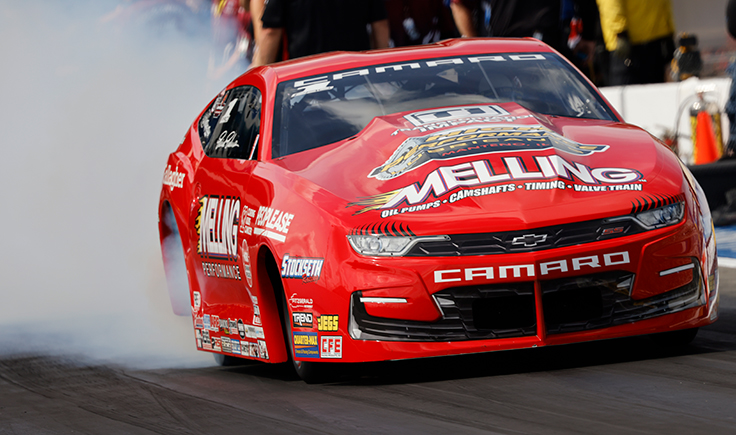 Her St. Louis win was easily one of the best of her career and it helped set up a clear path to a possible fifth championship. There is still work to be done, namely the 17 point gap that still exists between her and leader Greg Anderson but that’s not a lot at this stage of the season.
Odds: 4-1

The bad news is that his quarterfinal loss in St. Louis hurt quite a bit but there are still a lot of positives here. For one, he’s still the championship leader and this is still arguably the quickest car in the class. He’s also been a beast in Dallas with five wins in seven final rounds.
Odds: 5-1

He’s got a 116 points gap to make up if he’s to pull off a miracle and win the championship which would be very tough to do given the quality of the cars at the top of the standings. Then again, when you split the atom almost every time you let the clutch out, it tends to make things much easier.
Odds: 6-1

Before the 2021 season began, if someone had told him he’d be No. 4 in the Camping World standings heading into Dallas and that he’d have a win under his belt, we’re not sure he’d have believed it but here we are. Where he goes from here will be interesting but it doesn’t seem like the championship battle is a two horse race just yet.
Odds: 7-1

We’re going to give him a healthy bump this week because of the nice job he did in reaching the semifinals in St. Louis. There’s also a bit of credit to be given for racing in his home state even though Odessa is not exactly close to Ennis. Regardless, he’s shown an ability to win rounds under pressure. That counts for a lot.
Odds: 8-1

Factory Stock title No. 2 is already in the bag and his father, Greg, is making a late-season move to win his fifth world championship in Super Stock. So, is it too much to ask that he makes a similar move towards the Pro Stock title? He’s a long ways back so he’d almost have to win this race which is entirely possible.
Odds: 9-1

At times this year, it has seemed like the two Harlow Sammons entries were never on the same page at the same event. That wasn’t the case in St. Louis where they each reached the semifinal round. That is probably a bigger deal than most realize. It shows they’ve gotten the hang of fielding a competitive two-car team.
Odds: 10-1

No one ever said Pro Stock was going to be easy and his up and down season perfectly illustrates that point. In the bigger picture, this is a solid team with a talented driver and the wins are going to come. Guaranteed. Honestly, would anyone be surprised if he was lifting the Wally here on Sunday afternoon?
Odds: 12-1 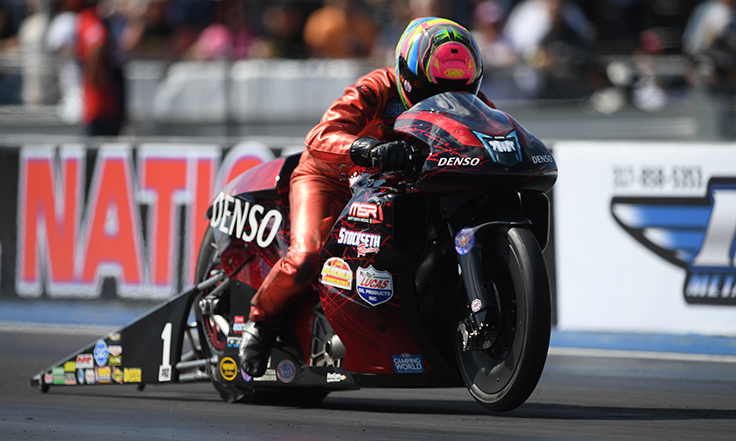 We’re going to keep him in the top spot this week largely because of his potential, not because of recent results. Remember, he’s coming off a quarterfinal loss at the most recent Pro Stock Motorcycle race in Charlotte. That being said, most times this is the best bike in the class and it’s ranked accordingly.
Odds: 3-1

I supposed we’ve seen enough from this team to become a believer. The Reading win was huge for a number of reasons and he’s now the points leader with four events left in the season. That’s probably far more than he ever expected when this season began.
Odds: 4-1

The Pro Stock Motorcycle class does not have a long history at the Texas Motorplex with just 18 appearances since 1986 but this guy has three wins in six final rounds. He’s also just 39 points back in the championship battle which means he’s right in the thick of it.
Odds: 5-1

Drag racing is very much a “what have you done for me lately” sport and lately, she’s been pretty darn good with a confidence-building win in Charlotte. The payoff for that victory is an honest-to-goodness shot at a fourth world championship.
Odds: 6-1

To quote the old blues tune, “if it wasn’t for bad luck, he wouldn’t have no luck at all.” This is a guy who has been through the ringer this season and if there was ever someone overdue for a bit of good fortune, it’s him. All he can do is keep pushing and good things will eventually happen.
Odds: 7-1

He’s been flying under the radar lately but when you look at the big picture, he’s just 95 points out of first place which is not great, but also not awful. That means he’s still a straight-up contender for the title but he can’t waste an opportunity. A final round here would be huge.
Odds: 9-1

Let’s face it, no one expected him to be in tenth place this late in the season so while his championship hopes are dashed, there are still a few races left to be won including this one. Ironically, he’s only won here once, and that came in 2014.
Odds: 10-1

Every now and then, this bike does something really spectacular like qualifying No. 1 in Sonoma with a 6.73. That shows just how much potential is here. And, 150 points is a lot of ground to make up so it’s hard to see a championship run in her future, but then again, this is the Pro Stock Motorcycle class and we’ve seen a lot of crazy things happen.
Odds: 13-1