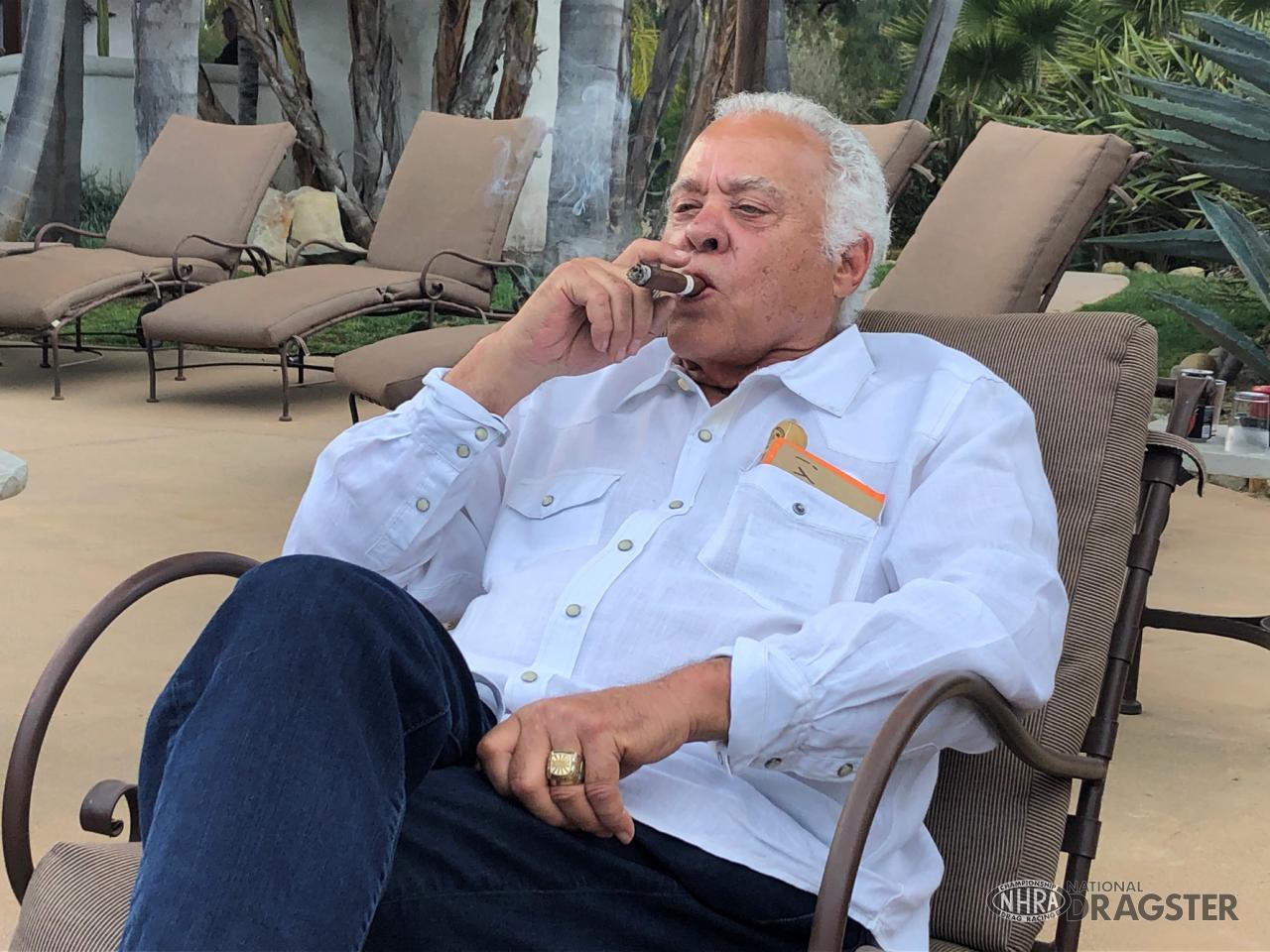 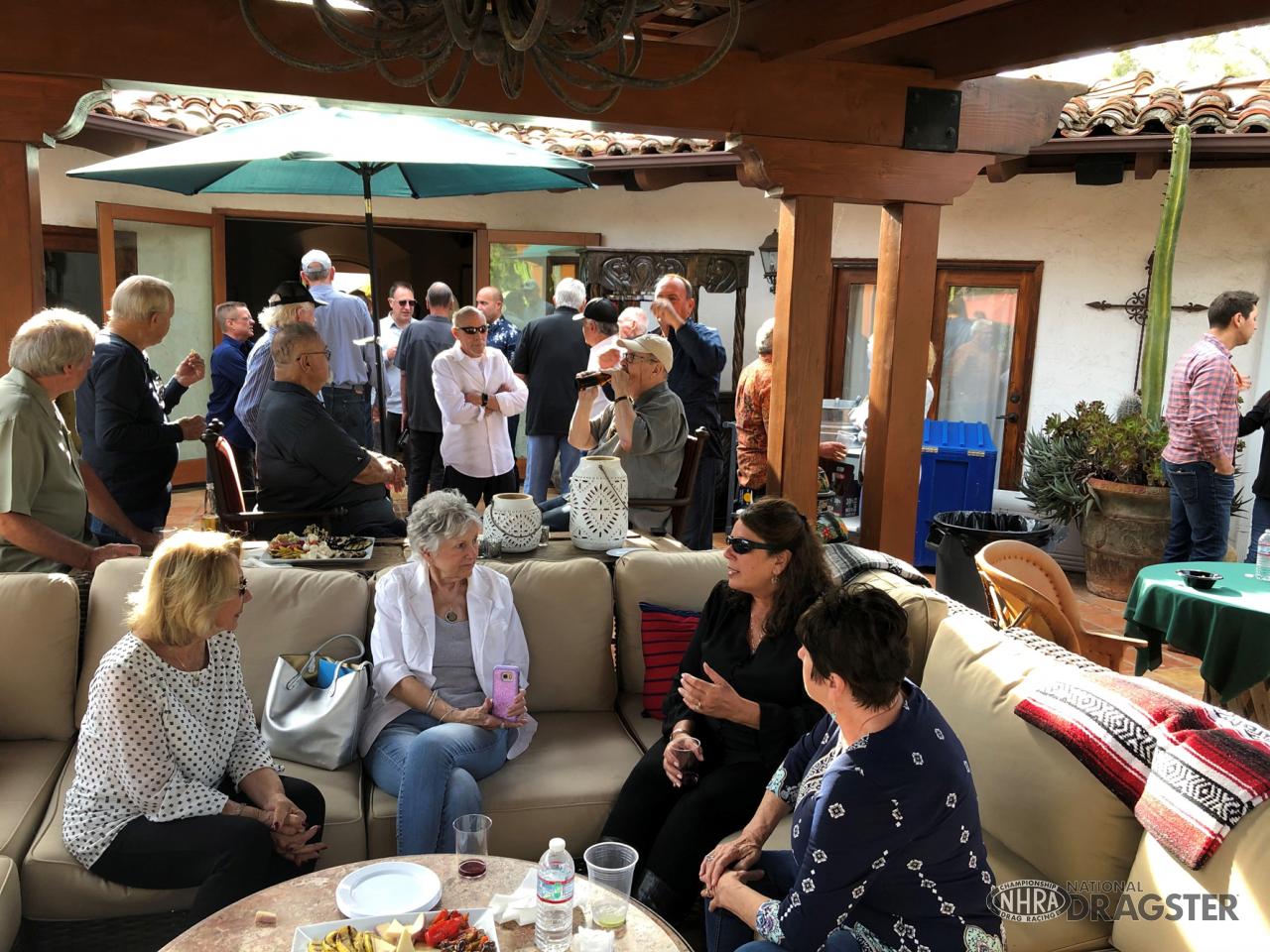 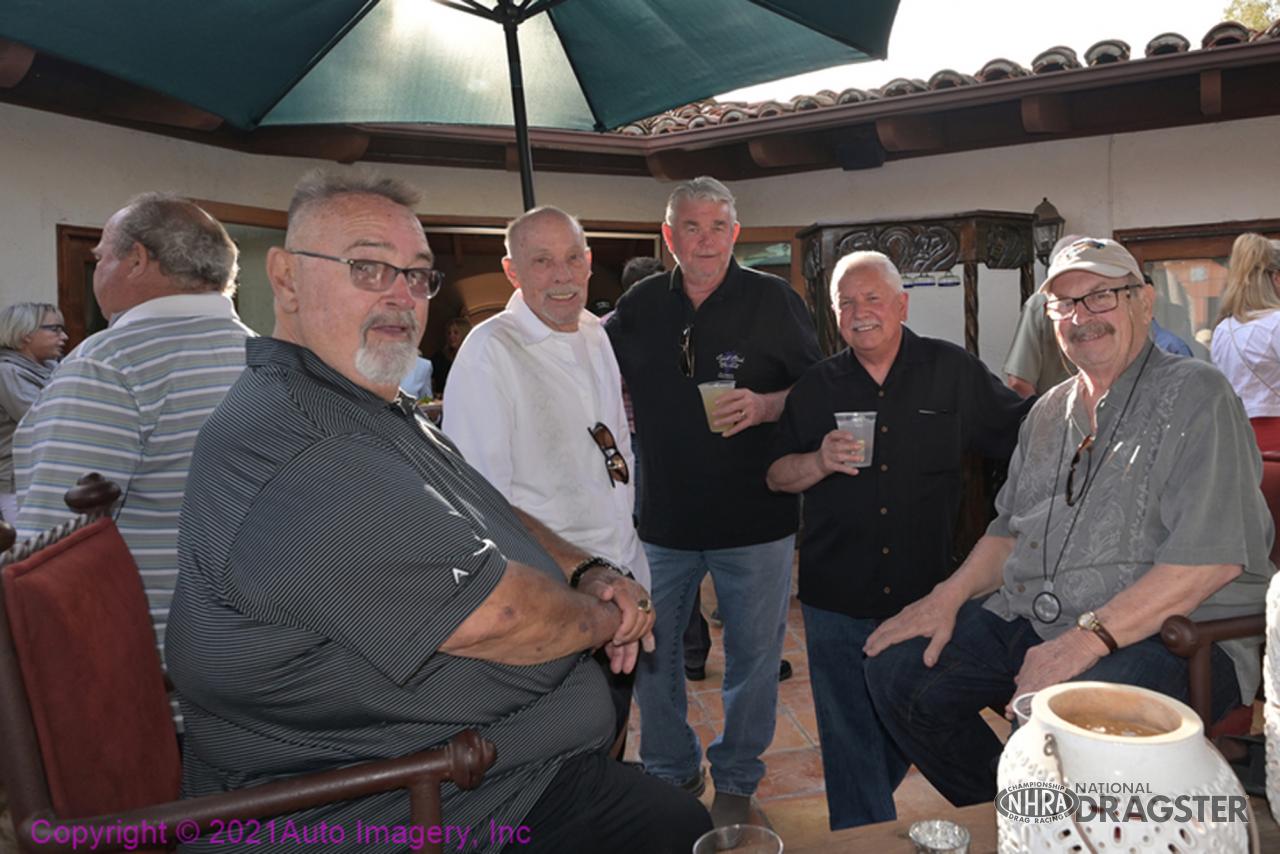 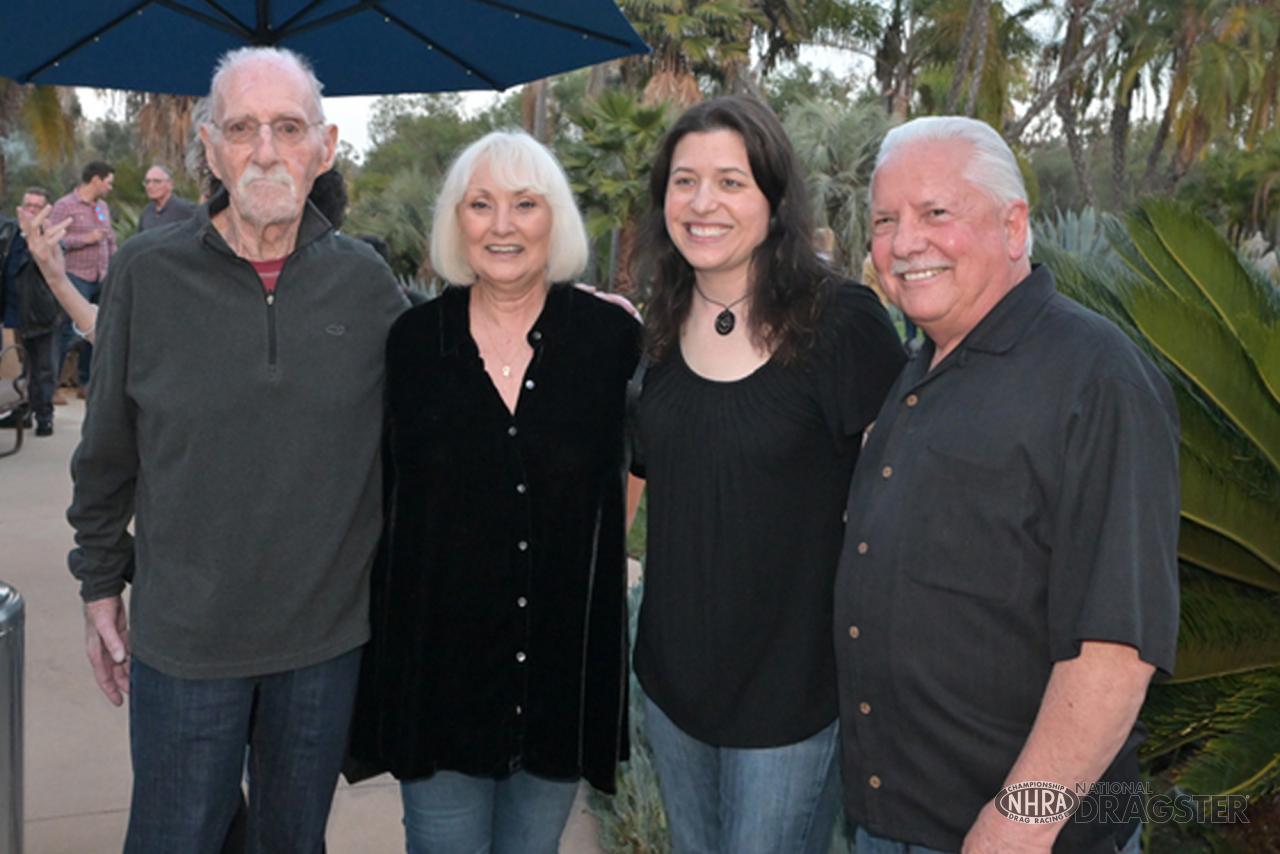 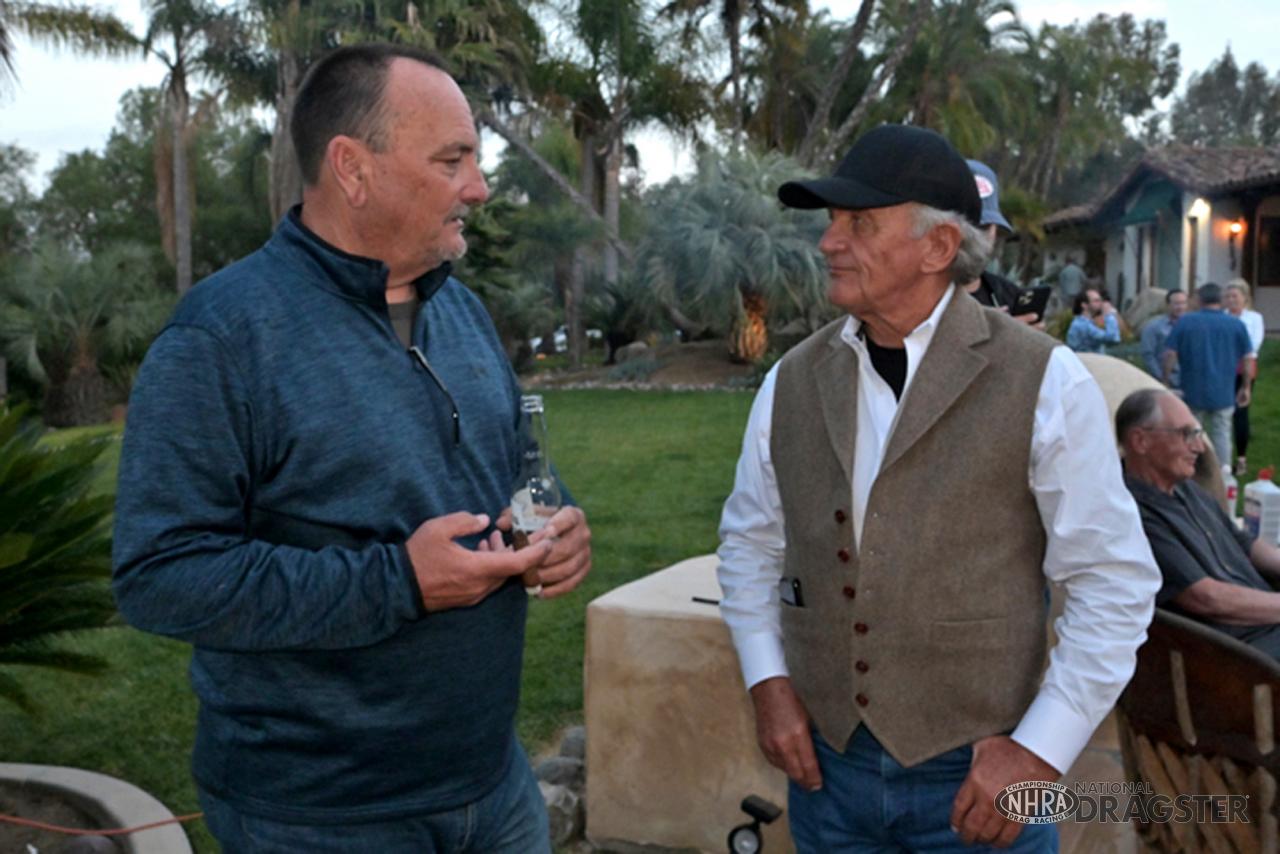 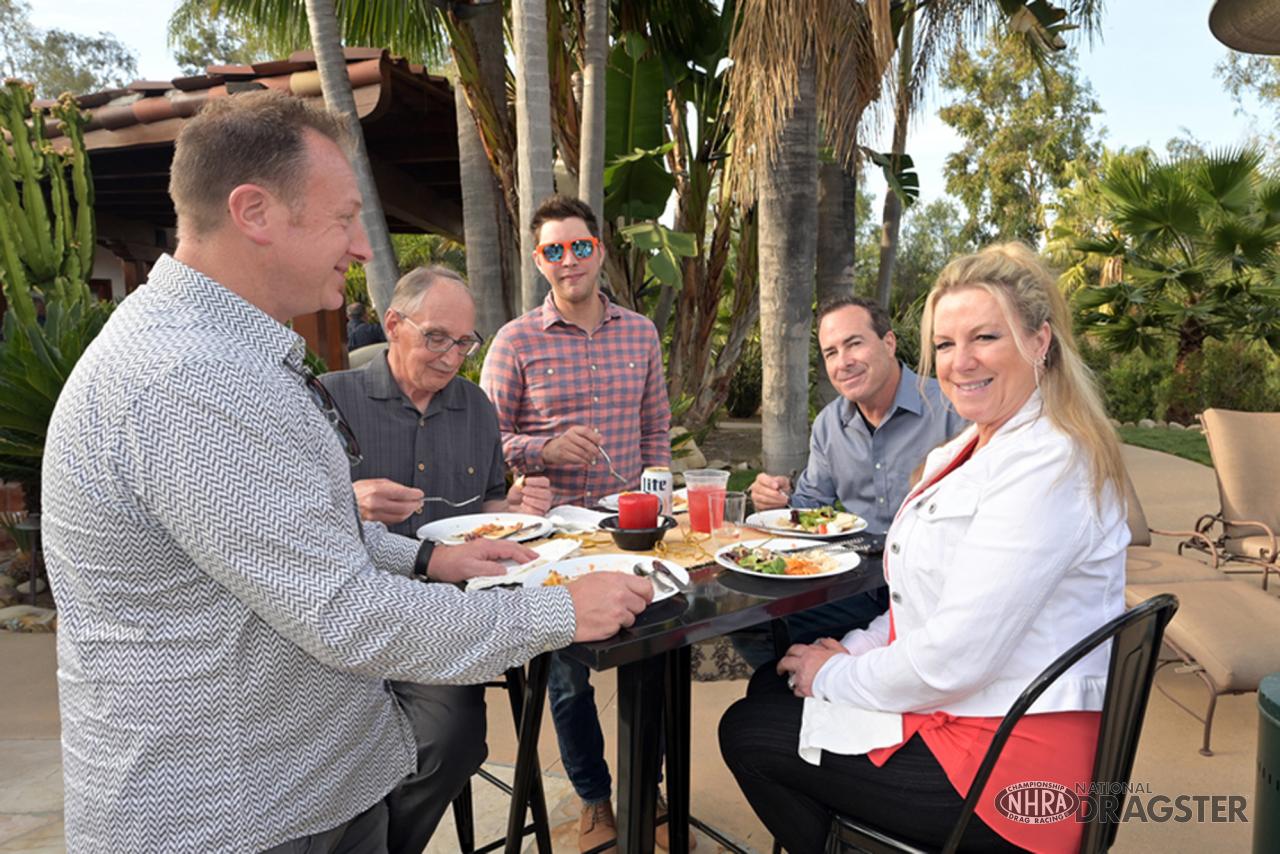 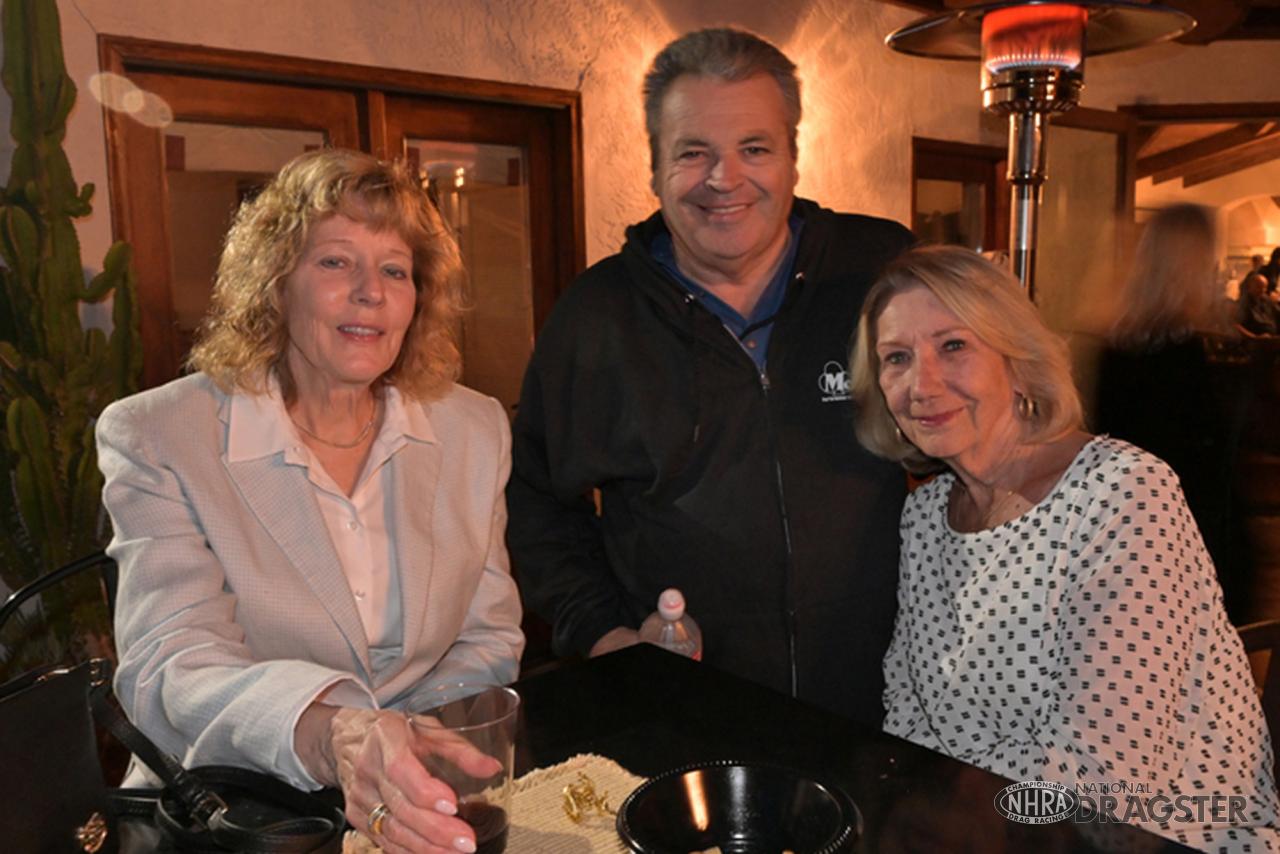 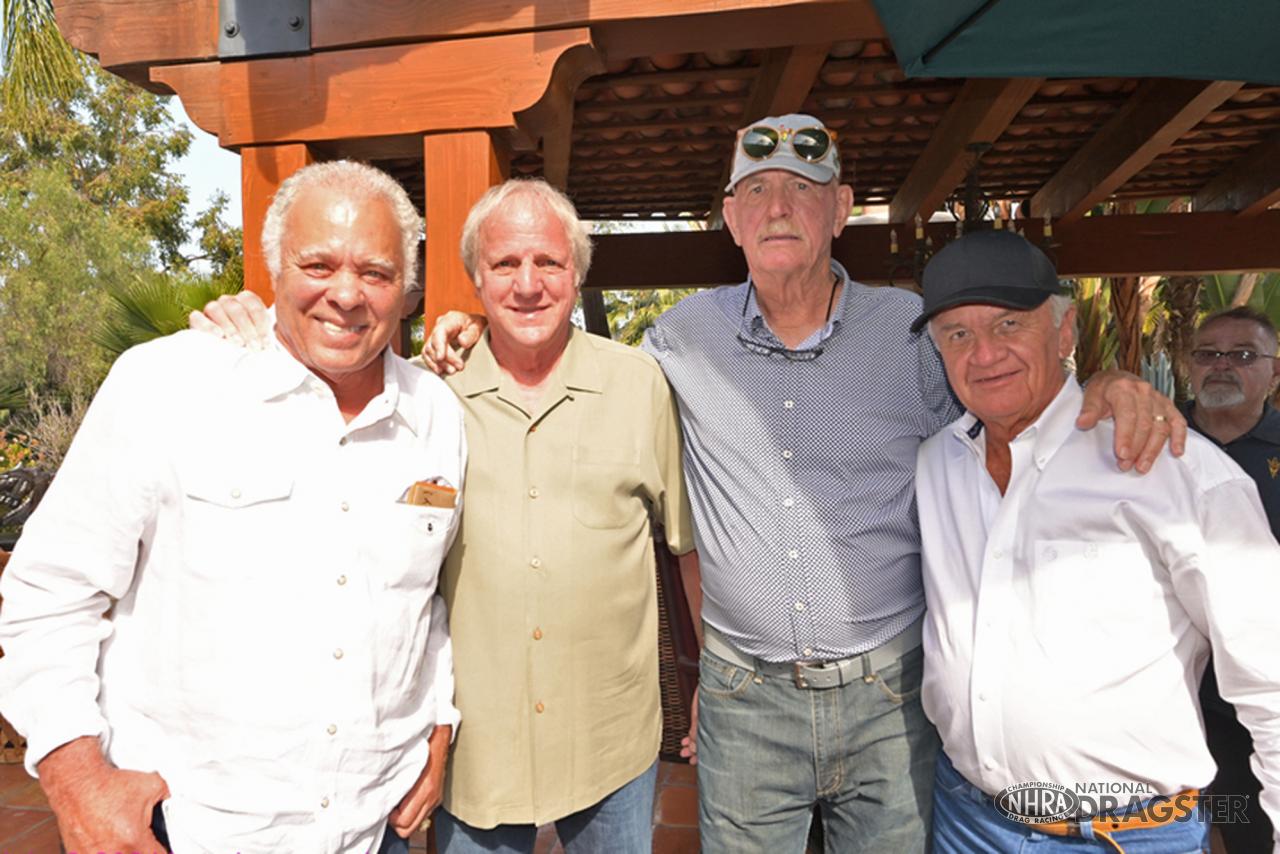 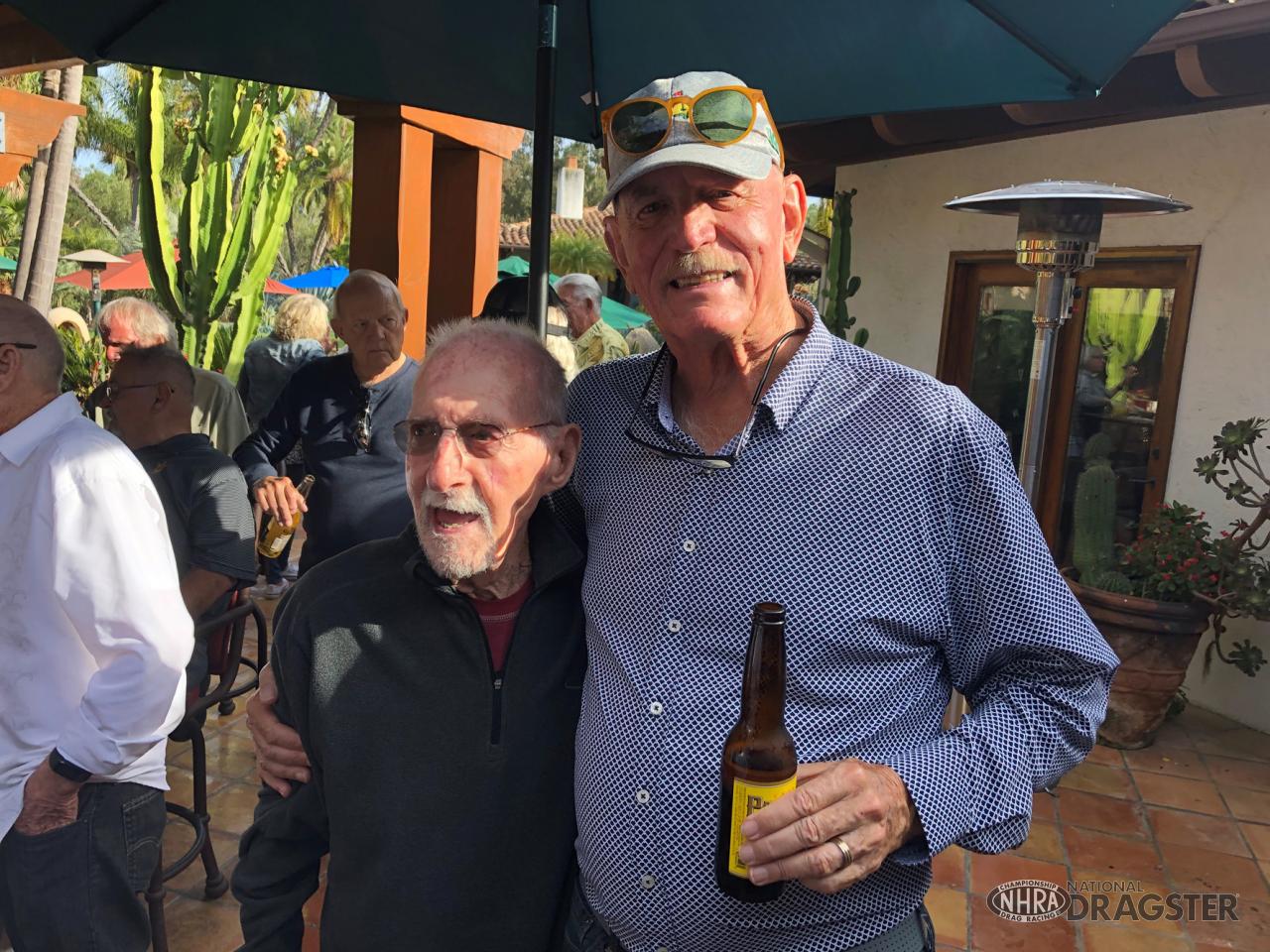 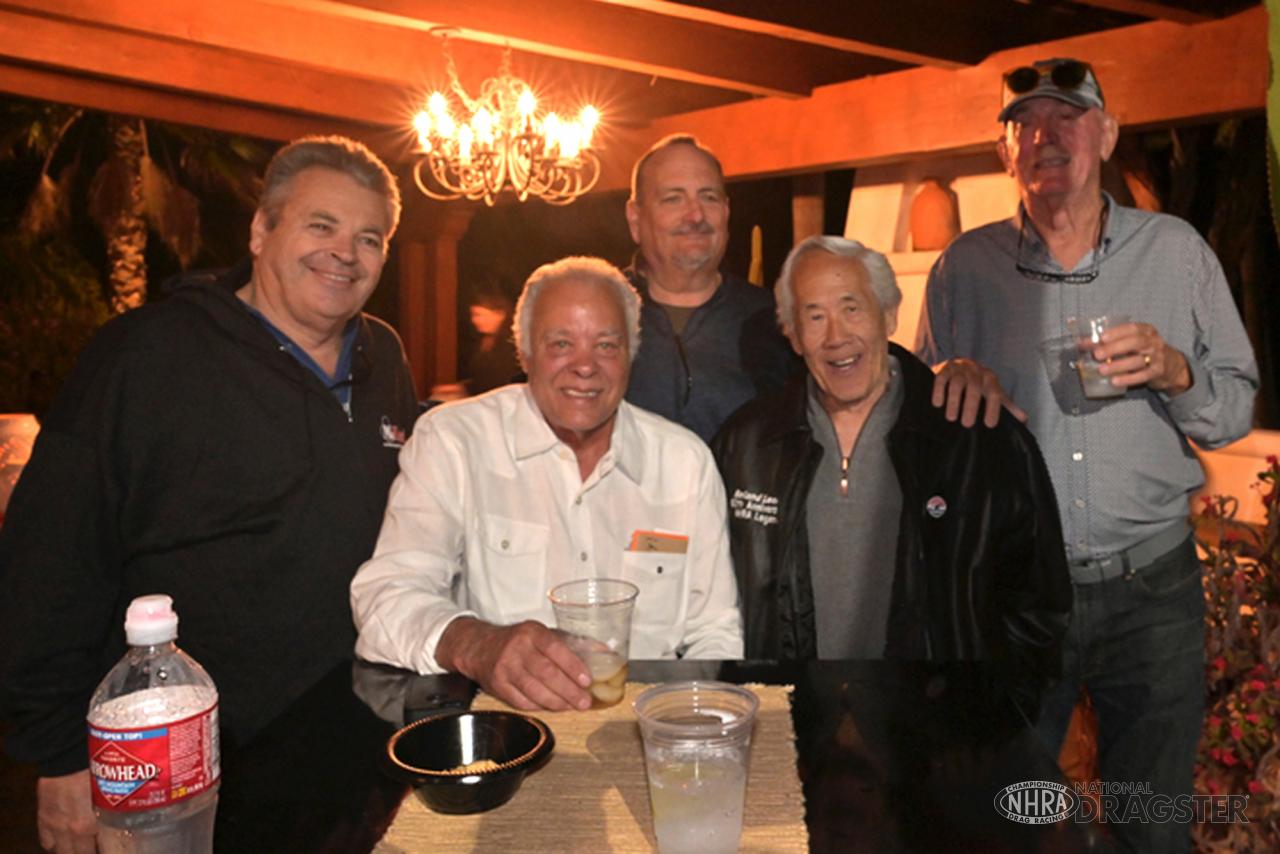 Richard Tharp flew in from Texas. Al Segrini made the trip from Massachusetts, stopping in Indy to pick up Tom Prock. “Waterbed Fred” Miller made the long trek from Florida. Ron Capps came from right around the corner.

Dozens of longtime friends and racing pals flocked to the house of quarter-mile legend Don Prudhomme to help “the Snake” celebrate his 80th birthday in style. As Miller quipped, “When the Godfather calls, you come running.” 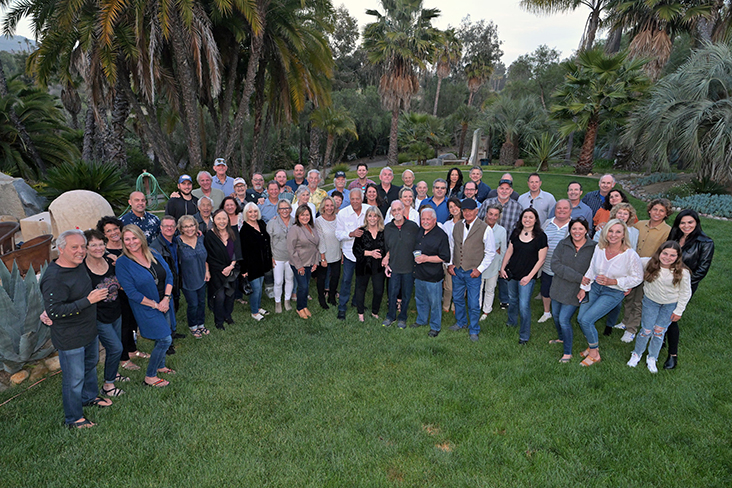 It had been more than seven years since I’d been to the Prudhommes’ house, with its spacious landscaped backyard capable of handling three times more than the exclusive list, and filed this story, and all of the usual gang that orbit Planet Prudhomme were also there: Roland Leong, Bob Brandt, Ed Pink, Donnie Couch, Pat Galvin, Simon Menzies, Larry Bowers, Steve Gibbs, “Honda Doug” Woiwod, “Dudley” Rickart, Jerry Ford, Susie Arnold, Lynn Rose, and many, many more, including Prudhomme’s three sisters, Jeanette, Joyce, and Judy. The “media” was there, too: “Snake” biographer Elana Scherr, former Prudhomme publicist Ted Yeryzk (another Indy resident eager to return to SoCal’s temperate climes), and Auto Imagery’s Richard Shute was there to chronicle the event and graciously shared some of the images here with me.

The last time I was at Casa Prudhomme was Christmas 2014, Tom McEwen, Bill Doner, Art Chrisman, Mike Kuhl, and Bill Simpson were there, but now they’re all gone, and very much missed, as was Prudhomme’s old pal Raymond Beadle, who had been the star of Prudhomme’s 70th birthday surprise party at the NHRA Museum. 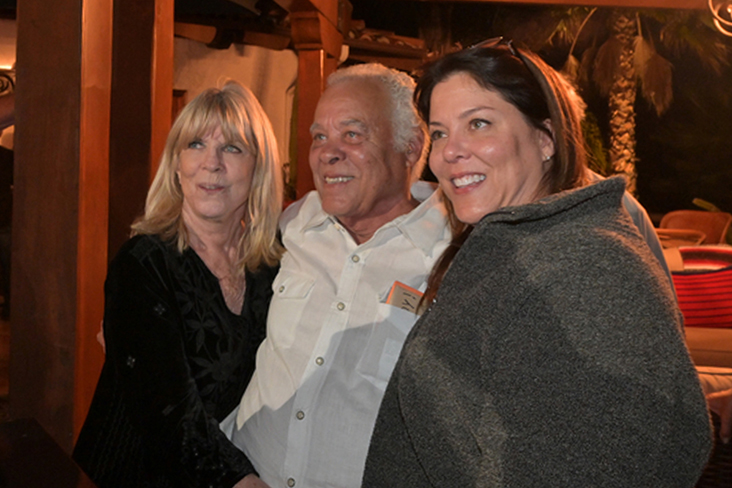 Our hosts: Lynn and Donna Prudhomme and the birthday boy

In many ways, that 2011 surprise party was a lot harder to pull off than this one that “the Snake” knew about and endorsed, even with COVID-19. Thanks to the ramped-up vaccination efforts (and the vaccine-eligible age of the attendees), the Prudhommes were able to host the affair, and people came from near and far to honor the man, who doesn't act anything like he's 80 (he's going off-road racing for a week in Mexico beginning tomorrow). 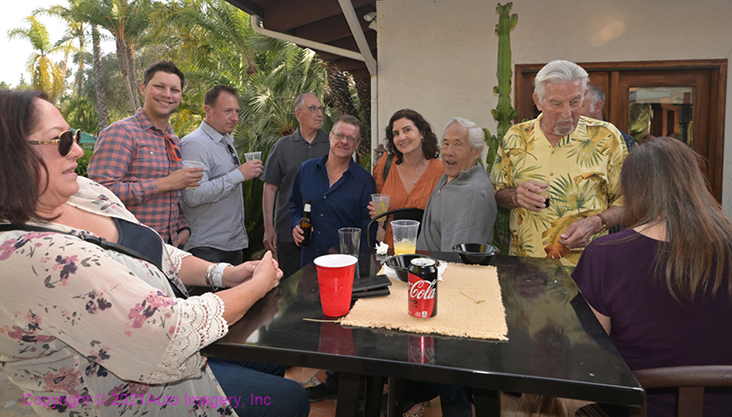 The great thing about these get-togethers is that everyone knows everyone, and we all have drag racing (and Prudhomme) in common. Table-hopping was the plan of the night. I talked good ol’ NHRA days with former colleagues Gibbs, Arnold, and Yerzyk and heard some funny new stories from Susie and Simon about our ol’ pal Dale Armstrong; talked about shared Culver City roots with Roland; talked ramp trucks with Scherr and her husband, Tom, who have two they bought and are restoring; heard all about the cool new modern versions (crank trigger, EFI) of classic muscle-car engines that Brandt and Pink are building and selling at Ed Pink’s Garage; and caught up with Capps (who, along with wife Shelley, had been chauffeured to the event by their now college-age daughter, Taylor) about his new crew chiefs and crew on the NAPA Dodge.

Because I can never get enough of 1970s Funny Cars, I spent large portions of the night talking to Tharp, Segrini, and “Waterbed” about their adventures and memories. I had a tape recorder at the ready but decided against whipping it out and turning a party into an interview but kept some pretty good mental notes about some of the things. 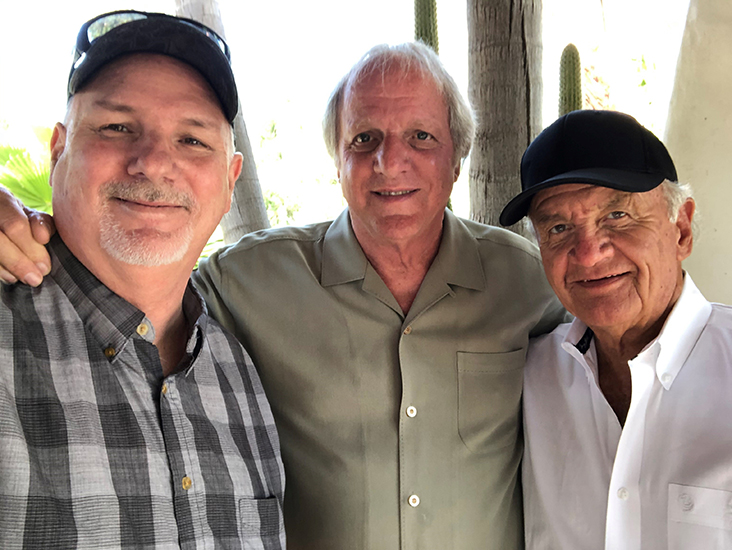 Segrini remembered being an aspiring Funny Car racer in the early 1970s, and studying “the Snake’s” mannerisms whenever he came to Segrini’s turf at New England Dragway. “I watched how he walked, how he got in the car, how he got buckled in, how he staged – everything – because I knew I wanted to be just like him,” said Segrini, who ended up with a spectacular career of his own. “Not all that long ago I told ‘Snake’ all about it, and how much he has always meant to me.”

Segrini told great stories of working for the Castronovo family (of Custom Body Enterprises fame), especially Fred, with whom he started as a youngster polishing wheels. “I got the car all polished up pretty Saturday night, and when we unloaded the trailer Sunday, everything looked terrible; Fred had a priest come Saturday night and bless the car with Holy Water.” He told an incredibly funny story about problems they were having with valve heads and how the engine wouldn’t shut off after it began dieseling after one of the valves put a hole in a piston. Segrini tried everything and eventually had to bail out of the window when it caught fire, then drove off the end of the track, destroying the front end. Fred didn’t find out until they got home when he opened the trailer door to peek in on his pride and joy.

Miller reminded Segrini of the time during that valve problem where he actually picked a valve head up off the track with a red rag after it broke on the burnout, then stuck his head in the side window and unfurled the rag to show Segrini, whose crew had not caught on to the problem. “If it was anyone but Fred who showed me that, I probably would have run the car,” Segrini laughed.

Both were effusive in their praise and admiration of “Jungle Jim” Liberman’s abilities. Segrini, whose first national event win at the 1974 Summernationals famously came against Liberman, who rode a towering wheelstand to half-track against him. 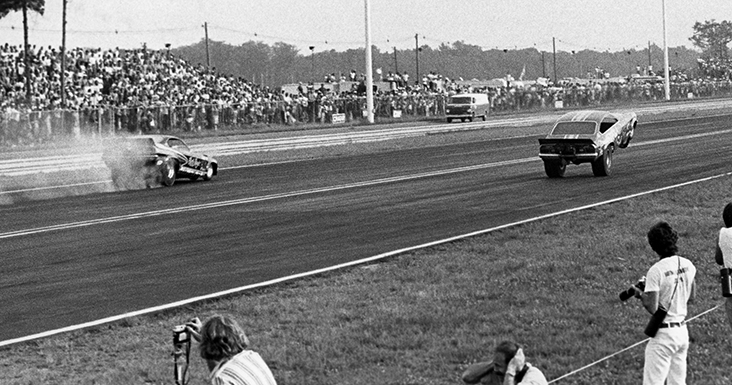 “I was having my own issues because the car [the Black Magic Vega] was smoking the tires, but I remember looking out the window to see where he was and seeing his front tires five feet off the ground,” said Segrini, who had upset No. 1 qualifier Prudhomme in the semifinals. “I kept thinking, ‘He’s going to have to lift, too,’ but he wasn’t lifting. Finally, he just disappeared, and I got the win; I’ll never forget that day.”

Segrini also remembered being at a match race where Liberman was the only one who could get down the track. He went over and asked Liberman what he had done with his clutch to make the car work. Maybe “Jungle” would even let him look inside the bellhousing?

“You’ll be sorry you looked,” Liberman told him, and when Segrini did get a peek, he couldn’t believe the minimalist setup Liberman was running, and Liberman cautioned him against even trying it on his own car. 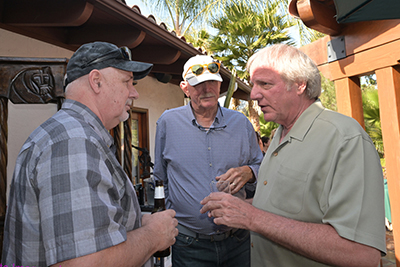 Miller remembered 1973, when he was working on the Dale Emery-driven JEGS Camaro driven by his future Blue Max crew chief boss Dale Emery.

“It was at the 1973 U.S. Nationals, and I remember that ‘Jungle’ had qualified on one of the early days, then went off match racing Saturday and Sunday,” Miller recalled. “On course, eliminations were Monday, and we had him in the first round. When we left the hotel Monday morning headed to the track, we pass a hotel and there’s ‘Jungle’s’ car out in the parking lot, totally torn down. I told Emery, ‘Looks like we’ve got a bye in the first round.’ He just told me, ‘He’ll be there,’ and sure enough, he not only made the call but beat us in the first round. That was ‘Jungle.’ What a racer.”

Speaking of Indy, Miller told me a story I’d never heard about their big final-round win over Prudhomme at the 1975 event. As the Max crew was thrashing on the Milodon between rounds, fellow Texan Tharp jumped in to help and loosened an oil line that wasn’t part of the normal maintenance. When they fired the car for the final, the line began to leak.

“Tharp runs to the truck and brings me back a Crescent wrench – totally closed – and I’m under the car and don’t have time to do that, so I just reached under there and tightened it by hand, and we were able to make the run and beat ‘Snake,’ but the only reason that happened was because [Prudhomme crew chief] Brandt waited on us. Incredible sportsmanship.”

I didn’t get a chance to grab Brandt at the time, but I called him later to get the full story and whether he regretted waiting on them and missing a chance for another Indy win.

“We’d raced against those guys almost our whole career, so you get to be more than just competitors; you become good friends,” he explained. “Plus, we’re up there to race; if you’re not going to actually race someone, what’s the sense of being up there? You want to wait for them. You try to take care of each other. I looked over and saw they were having a problem, so there was no sense of us even doing a burnout until they were ready.”

Miller had also been effusive in his praise for Brandt and the work he did on “Snake’s” cars that was key to their success. “Man, I don’t think that car ever broke, and it almost always went right down the track,” he marveled. He said that out loud (really loud) because Brandt was standing behind us engaged in another conversation. He never heard it, so I repeated it to Brandt. 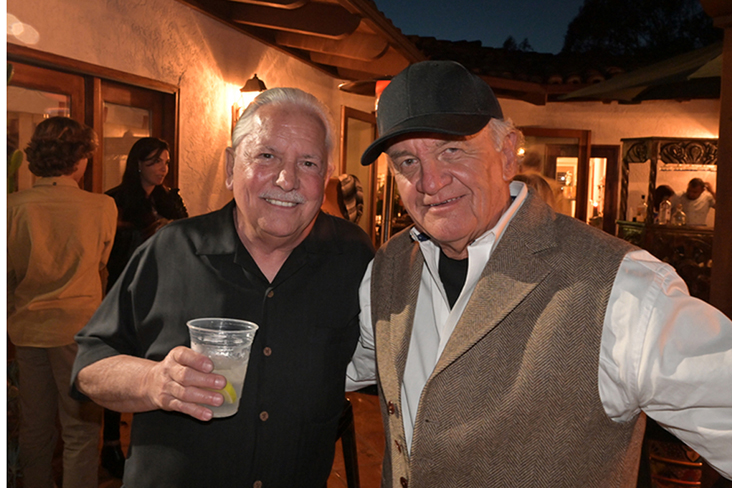 “It was a team effort,” Brandt demurred. “We did spend a lot of time on preventative maintenance because we ran so many races in a row with national events and match races. There was no ‘off time.’ The only way to stay ahead was to be ahead, and I’d rather have them chasing me than chasing them.”

And, as history proves, people spent a lot of time chasing Prudhomme and Brandt in the 1970s. 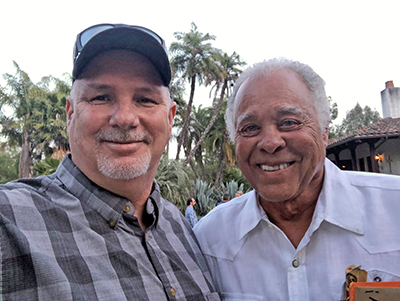 As I wrote about the last party I attended, it just blows my mind how this group has stayed in touch and remain so close. They have bonds and friendships forged under the pressure of racing, bonds that will remain long into the future. Attending it is like dropping in on someone's class reunion, but the stories are way better than remembering who puked on whose shoes at the big dance (although some of those stories could probably cross over).

For me to be among these stars of our sport -– the people who made the history that I love to write about -– and to not only meet but be accepted and welcomed by the very legends I idolized as a fan, to become a small part of their very special social circle, is just overwhelming sometimes. It’s a place that this little pit rat could never have dreamed of ending up, and an opportunity to share with all of you other pit rats and superfans the stories they share, the places they’ve been, and the genuine icons they are.