The NHRA Western Swing has been around since 1989, but this year, it has a new look and a shot at making some more history. Here's a detailed history of the Western Swing with a look back at those who have swept the Swing and those who have gotten close.
09 Jul 2021
Phil Burgess, NHRA National Dragster Editor
DRAGSTER Insider

When NHRA introduced the Western Swing in 1989 — a three-races-in-three-weekends test of technology and tenacity from the high-altitude climes of Denver to Northern California’s Sonoma Wine Country to Seattle in the Great Northwest — it was a real game-changer.

Although recent NHRA national event schedules have had stretches of up to four races in a row, they never seemed to match the allure of the original, which was pretty revolutionary in an NHRA schedule setting. Consider that in 1987 the tour had just 14 events, so there was no need to jam them all together as there is now, and teams were used to having weeks off between events to repair and resupply. Not anymore.

Although NHRA added the Sonoma and Seattle events in 1988 (or, in the case of Seattle, re-added it after an eight-year hiatus following the demise of the Fallnationals), that was the year that Denver’s Bandimere Speedway was shut down for a major $4.2 million remodeling, so the Western Swing did not begin until the following year. 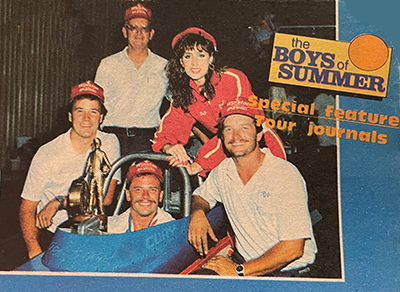 Although match racers of the 1970s probably did more events, the idea of a three-race Swing as part of the 1989 national event schedule was so unique that National Dragster cataloged the experience through the eyes of five everyman racers — Michael Brotherton (Top Fuel), Art Hendey (Funny Car), Cory McClenathan (Top Alcohol Dragster), Jett Field (Top Alcohol Funny Car), and Ron Neff (Comp) —  whom we followed for the three events in a special feature for ND called “The Boys of Summer.” It was our first real interaction with Cory Mac, who had just begun racing in TAD in April after racing VWs for years. The Mile-High Nationals was his first national event, and he won it and did so by beating reigning world champ Blaine Johnson in the final. Talk about a memorable start!

The 2021 edition of the Swing could be well remembered for many reasons, not the least of which being where it completes. The Swing begins, as it has for 30 of its 31 previous incarnations, in Denver, then heads west to Sonoma. Then, instead of racers heading north up Interstate 5 to Seattle, they’ll head south to Pomona, where we'll be staging the historic Winternationals in the middle of summer, a Golden State parting gift from COVID-19.

As you can see in the chart below, the Swing’s two oddball years were 2010, when we started in Seattle and finished in Denver (experiment gone bad), and last year, when all three events were KO’d by the pandemic.

In addition to the Swing’s odd finish in Pomona, this year Pro Stock Motorcycle riders will get the chance to try to pull off the nearly impossible feat of sweeping the Swing, a feat accomplished only eight times in 31 previous tries and not since 2009 in the Pro ranks. The two-wheeled warriors were set to make their first appearance in Seattle last year before COVID-19 wiped that out, so now they get another chance to sweep the Swing, plus the bonus of becoming the first Pro Stock Motorcycle rider to ever win the Winternationals. 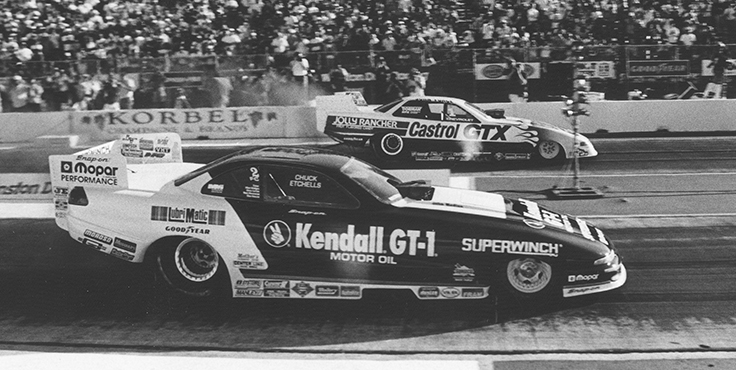 Amato and crew chief Tim Richards were the first to do it, but Force’s 1994 Sweep was memorable in that he beat the late Chuck Etchells in the final rounds of both Denver and Sonoma and barely won the Sonoma race, eking out a win light by just .001-second on a holeshot, 5.14 to 5.12. Etchells got knocked out early in Seattle by Kenji Okazaki, and Force completed the sweep by beating Al Hofmann in the final. 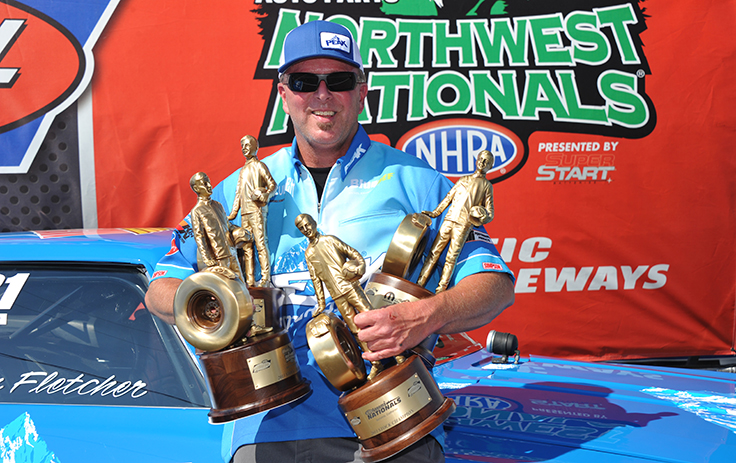 The amazing Mr. Fletcher also swept the Swing for the first time that year, doing it in Super Stock with his vaunted hugger-orange Checkmate Camaro. His 2013 sweep may be more amazing as after winning in Super Stock in Denver and Stock in Sonoma, he won in both classes in Seattle in his first and only double-up victory. Four Wallys in three weeks? Amazing! 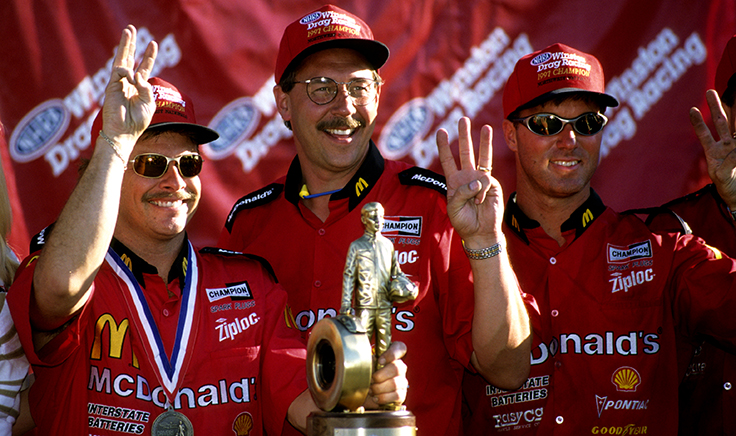 Cory Mac’s 1997 sweep was made even more impressive as he and the McDonald’s team actually won four in a row, winning in Brainerd two weeks after Seattle. McClenathan’s crew was a dream team of future tuning Hall of Famers led by Mike Green and assisted by Mike Neff, Brian Husen, Dickie Venables, and Joe Barlam, all now well-established and respected crew chiefs of their own. 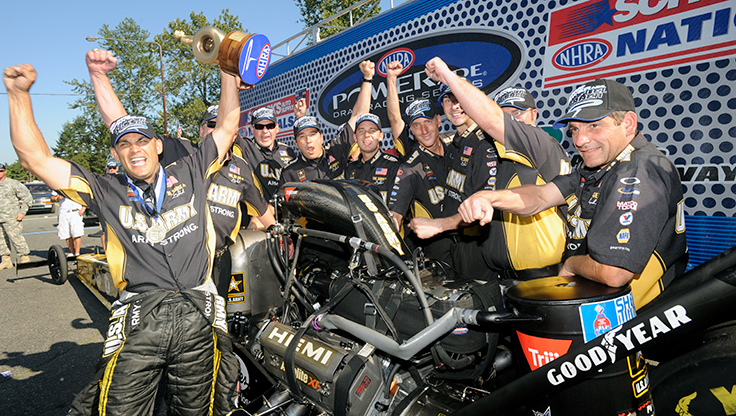 Tony Schumacher’s 2008 sweep under the guidance of Alan Johnson was even more impressive as their Western Swing sweep was the first three of what would be seven wins in a row, covering 31 rounds before losing to J.R. Todd in the final of the eighth race, which was in Dallas. Schumacher won 15 of 24 races that year.

(Schumacher also owns the ignominious record of losing in all three Swing finals in 2011, falling to Spencer Massey in Denver, Antron Brown in Sonoma, and Del Worsham in Seattle.) 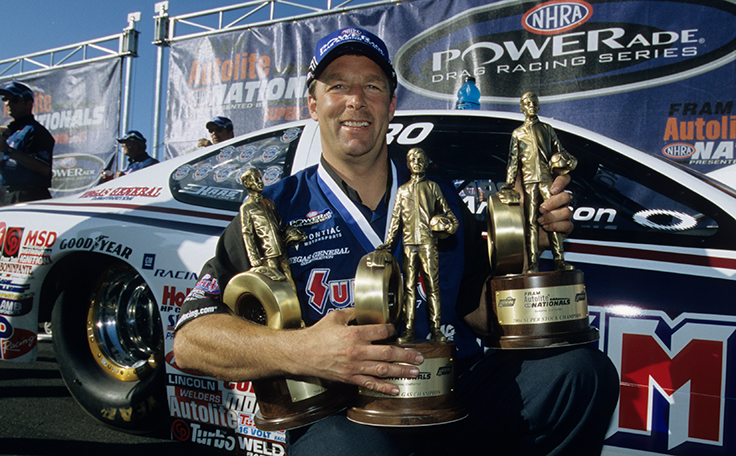 Anderson accomplished what Pro Stock greats Bob Glidden and Warren Johnson never could, sweeping the Swing in 2004 during a 15-win season of his own. Johnson got close in 2011 by winning in Denver and Sonoma but lost in round one to V. Gaines in Seattle.

So, although no one in the Pro ranks has swept the Swing since Brown in 2009, plenty of people have gotten close, including A.B. himself. Three years after his hat trick, he won Denver and Sonoma in 2012 but got KO'd by eventual event champ Shawn Langdon in round two in Seattle.

Pro Stock's Allen Johnson also was bidding for a sweep at the 2012 event after winning in Denver and Sonoma but was felled in the Seattle semi's by Erica Enders. Johnson’s amazing run of success in Denver also likely prevented Vincent Nobile in 2013 and Jason Line in 2014 from possible sweeps as both won in Sonoma and Seattle after A.J. had won in Denver. Chris McGaha also won in Sonoma and Seattle in 2015 after seeing Larry Morgan upset Johnson in the Denver final.

Tommy Johnson Jr. has never swept the Swing, but in back-to-back years, 2015 and ’16, he stopped two others from doing so. Jack Beckman, who was denied a Sweep in 2007 after winning in Denver and Seattle then getting bounced in round one in Sonoma by Cruz Pedregon, almost joined Force as a Funny Car sweeper in 2015, winning in Denver and Sonoma and reaching the semifinals in Seattle before losing to eventual event champ Johnson Jr. Force himself took a shot at another sweep in 2016, a dozen years after his first, racking up wins in Denver and Sonoma before Johnson took him out in round one in Seattle.

(John Force Racing does have a sorta-other Western Swing sweep to its credit. In 2014, Robert Hight won in Denver, Courtney Force in Sonoma, and John Force in Seattle.)

Most recently, Anderson took another shot at a Pro Stock sweep with 2019 wins in Denver and Sonoma and reached the final in Seattle but was denied by Matt Hartford. So close!

Brown also came within one round of another Top Fuel sweep, bookending the 2017 Swing with wins in Denver and Seattle but lost the Sonoma final in the middle to good pal Steve Torrence, and Ron Capps won in Seattle in 2018 after runner-ups in both Denver and Sonoma to start the Swing.

It's safe to say that a Pro Stock Motorcycle rider could make history as the first two-wheeled Swing sweeper. Andrew Hines (2019), Eddie Krawiec (2012 and 2015), and Matt Smith (2007) have all won the Denver and Sonoma events in the same year and are the obvious favorites.

In Funny Car, I could see red-hot Bob Tasca III adding his name to the list, and dominator Steve Torrence, naturally, has a shot in Top Fuel.

Pro Stock is not contested this year in Denver, so both Anderson and Erica Enders, the two most likely to pull off a sweep, will have to wait until next year.