Championship drama? Not for Kyle Koretsky, who has his own goals

As a Pro Stock racer competing in the final event of the season, it’s impossible for Kyle Koretsky not to notice the drama, the gamesmanship, and the shenanigans that currently surround the battle for the Camping World championship.
13 Nov 2021
Kevin McKenna, NHRA National Dragster Senior Editor
Feature

As a Pro Stock racer competing in the final event of the season, it’s impossible for Kyle Koretsky not to notice the drama, the gamesmanship, and the shenanigans that currently surround the battle for the Camping World championship.

Koretsky is aware of it, but he wants no part if it.

“Honestly, I don’t think too much about it,” Koretsky says. “I’m not in the hunt for the championship so it doesn’t concern me. Of course I want Greg [Anderson, teammate] to win but I’m not into any of the games they’re playing.”

As for intentionally giving up a round in order to help Anderson’s chances, Korestky wants no part of it.

“I don’t mine those guys [the Elite team] trying to manipulate the ladder; we do that all the time in sportsman racing, but the rest of it they can have. Coming into this race, I have a shot to finish third and give KB racing the 1-2-3 finish they want so that’s my goal. It’s going to take some work for me to track down Dallas [Glenn] for third place, but it’s possible.”

Korestky’s sophomore season in Pro Stock has had it’s ups and downs, but mostly it’s been positive. He won his first race in Charlotte in September and before that, he drove to runner-up finishes in Topeka and Indy. Coming into Pomona, Koretsky has a solid 22-15 record this season in elimination rounds. 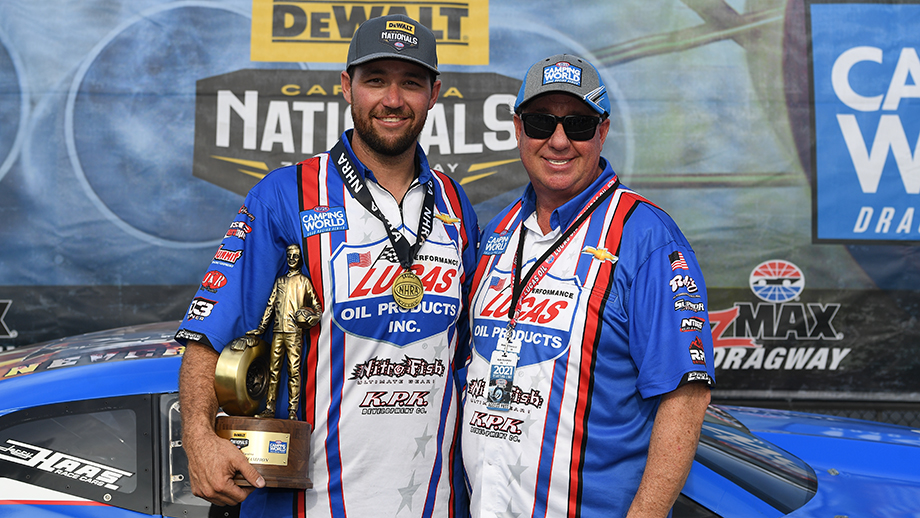 “I’m just thrilled to be able to do what I love and this year I’m a lot more comfortable in the car than I was a year ago,” Koretsky said. “It’s really just a matter of making runs. I’ve made enough now that everything is slowing down and I’ve got a better understanding of what the car is doing. Obviously, winning a race was big for my confidence. It also helps to know that KB Racing gives me a championship winning car every weekend. For a rental customer, you can’t beat that deal.”

Coming into Pomona, Koretsky hopes to be celebrating his second win on Sunday night along with a fifth championship for Anderson. Currently qualified No. 1 and No. 2, they could not race until the final round and if that happens, the championship will have already been decided.

“I’d love nothing more than to race Greg in the final, and beat him,” said Koretsky. I still get nervous before the first round but overall I’m a lot more calm now than when I first started racing.”

When it comes to the 2022 season, Koretsky isn’t sure of his plans but he’s fairly certain that he’ll return in order to contend for the championships.

“You’d have to ask my dad [Kenny] about that,” Koretsky laughs. “He’s having fun and I know he was really excited that we finally got a win. I just hope we can come back out and get a few more.”