Not many people (well, only one, actually) can say they caused Top Fuel legend Don Garlits to not qualify at the U.S. Nationals, upset Kenny Bernstein in the last race of his "Forever Red" retirement tour, and was the first Japanese national in an NHRA Top Fuel final. That guy was Yuichi Oyama.
11 Dec 2020
Phil Burgess, NHRA National Dragster Editor
DRAGSTER Insider 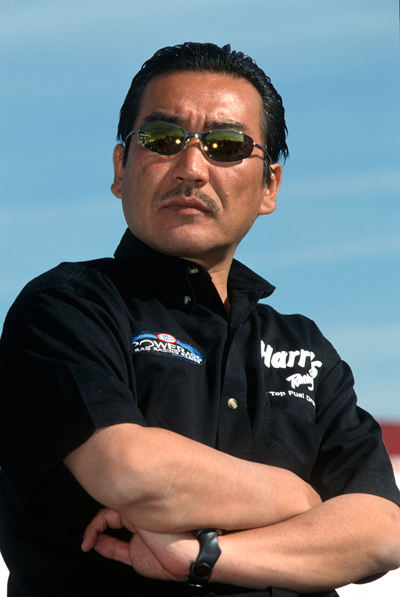 Last week’s “Name a random racer” column drew an avalanche of emails that will be fodder for a feature column, but, as promised, this week I’m talking about my random guy: Top Fuel driver Yuichi Oyama.

Unless you lived in Japan, where he competed in Top Alcohol Dragster and Top Fuel, you’d probably never heard of him until his debut at the 2002 Winternationals, but by year’s end, everyone from Don Garlits to Kenny Bernstein had felt the sting of his brief eight-race appearance on the tour that season.

Oyama, who hailed from the Shinagawa ward in Tokyo Japan, purchased turnkey the ex-Don Prudhomme dragster owned by Southern Californian Robert Reehl and hired Reehl and his crew to run it for him.

Reehl had competed in NHRA’s 1994 exhibition series in Japan and had won the race at Oita Aso Racing Park on the island of Kyushu, and Oyama and fellow countryman and Takahiro Tashiro had been part of the 1995 Drag Festival, racing against American Ray Stutz, Pelle Lindelow from Sweden, Rico Anthes from Germany, and Rachelle Splatt from Australia, so there was some definite cross-pollination going on, but Oyama came to Reehl on a recommendation from then-Prudhomme crewmember Mike Green. 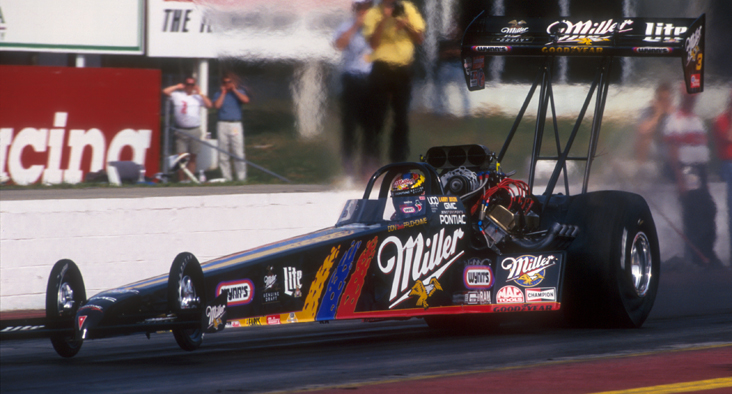 As mentioned earlier, Reehl had purchased the car, a '96 Murf McKinney-built chassis (the black car with the tricolor stripes), from Prudhomme, so Green knew that Reehl had a good car.

Remembers Reehl, “Yuichi sent me a message through his interpreter that he wanted to rent my car and have me and my guys to run it for him, and I was like, ‘You know, I got a better idea, why don't you just buy my car turnkey, take me out of it, and we’ll put you in it, and we can hit the ground running?'

“I got the wire transfer on Sept. 1, 2001; I’ll never forget the date because 10 days later 9/11 happened, and Yuichi was worried because he thought the end of the world was coming.”

The car sat idle until the Auto Club NHRA Finals in Pomona, where Oyama asked that Reehl run the car so that he could “see it on the computer” through NHRA.com. Reehl qualified the car No. 16 and drew low qualifier and eventual winner Bernstein in round one and, predictably, went down to defeat.

But remember that matchup for later in our story.

Before the 2002 season, Oyama flew to the United States to crossgrade his Japanese fuel license with Reehl, right-hand man Rick Cassel, and crew. Oyama did not speak any English but traveled with a small entourage that included a translator to communicate with Reehl and the crew and to assist in media interviews.

Remembers Reehl, “First pass, we ran 4.80, so I take him over and Del Worsham signs his license, and he was pretty excited about that. We go make another lap, and it runs 4.80 again, so I say, ‘Let’s go, we’ll get Kenny Bernstein to sign your license,’ and he’s in seventh heaven. We go and make another run, another 4.80, so I told him, ‘C’mon, we're gonna go for the big one — we’re going to get [John] Force to sign your license.’ By now he's about to pass out, and Force drags him over the motor home, pulls out an ice chest, and we have a couple of beers while Force signs his license. I figure I can’t do much wrong after that.”

“We ran the car all year, and he brought the money that I never had to run it, so I was able to do more with it and had a pretty decent year,” Reehl recalled.

Oyama qualified at all eight events he attended — almost always No. 11 or 12, but a career-best No. 5 at the spring Las Vegas event — and won six rounds. 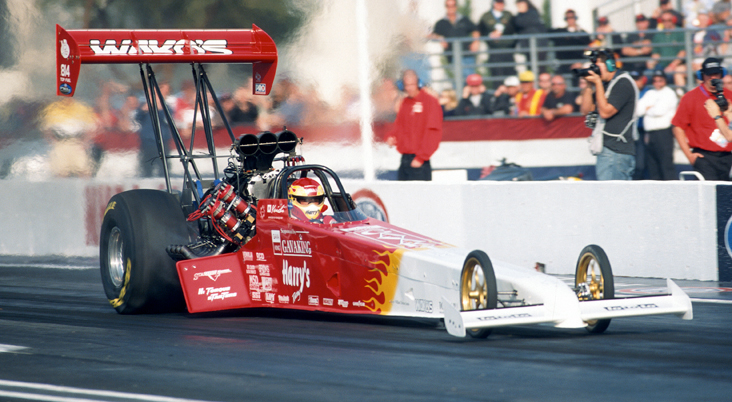 After smoking the tires in round one in Pomona against Clay Millican, Oyama scored his first round-win in Phoenix, beating Don Lampus, and stunned everyone by reaching the semifinals in St. Louis, beating Paul Romine and Darrell Russell (in Joe Amato’s car) before smoking the tires in an international semifinal clash with second-generation Aussie driver Andrew Cowin.

As I alluded to last week, it was Oyama who shockingly knocked Garlits and Swamp Rat 34 out of the 2002 U.S. Nationals field, the first time that “Big Daddy” failed to qualify in Indy. 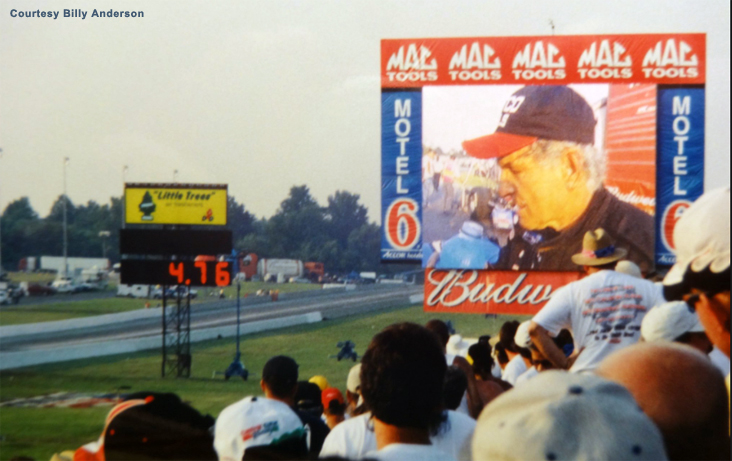 Oyama, bumped to No. 18, was up in the next pair, and although his car had made it down the track on almost every qualifying run, few felt he could get back around Garlits, but he did, clocking a 4.760 to put “Big Daddy” on the sidelines. That obviously didn’t sit well with the Garlits-centric Indy crowd.

“That was ugly,” Reehl remembers. “After we bumped him out, the fans were booing us and flipping us off on the return road. and our crew guys almost got into some fistfights walking back to the pit area. People were pissed.”

Oyama lost to Cory McClenathan in round one in Indy and lost in round one again at the fall Las Vegas event (to Tony Schumacher) to set up his greatest moment at the 2002 World Finals.

The event was the final event of Bernstein’s “Forever Red” retirement tour. The multitime and reigning world champ had enjoyed an amazing season with four wins and a 47-18 win-loss record and hoped to go out with a bang in Pomona, especially after being beaten in round one in Las Vegas by Shirley Muldowney. Bernstein qualified the Budweiser King No. 6, setting up a first-round date with Oyama, who qualified No. 11 for the fourth time in eight starts. 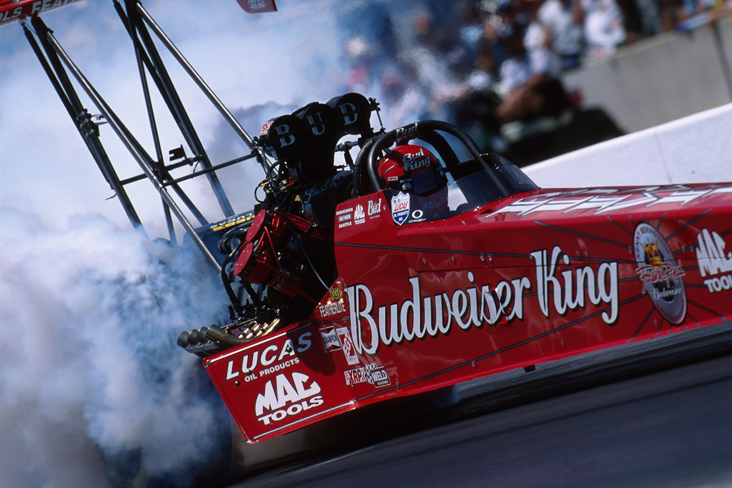 Incredibly, Oyama picked up two tenths between qualifying and round one, from 4.86 to 4.67, and beat Bernstein, who pushed out a head gasket, giving Reehl the revenge from exactly a year before and sending Bernstein out on a stunning loss to apparently end his Top Fuel career.

(It didn’t, of course, KB got back into the saddle in 2003 after son Brandon was injured in an over-the-guardwall crash in Englishtown. Kenny ran the final 15 events and chalked up four more wins, including a win at the Finals to go out in style.)

Oyama then beat tire-smoking Doug Kalitta and Doug Herbert but blew it up big time in beating DougZilla, but they were, amazingly, in the final round, making Oyama the first Japanese national in an NHRA Top Fuel final and only the fifth non-North American (can you name them all? Answer here). Kenji Okazaki had been the first Japanese resident in an NHRA final round when he famously runner-upped to Force at the 1993 U.S. Nationals and, famously, the first to win with his triumph at the 1997 Englishtown event. 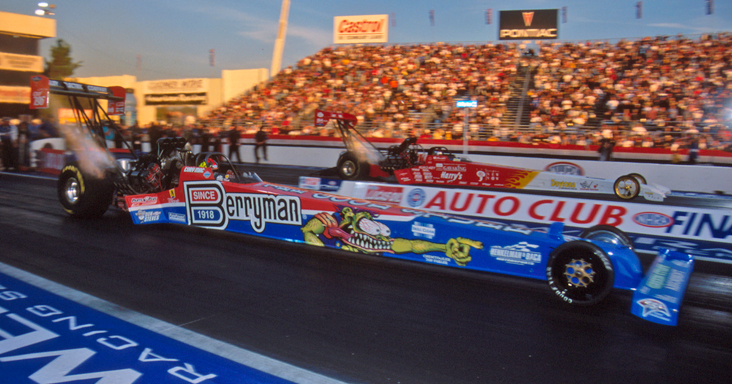 Reehl gave Oyama the power to win, tuning him to an impressive 4.739 in the final — quicker than McClenathan’s 4.756 in the Rick Henkelman-tuned David Baca/Berryman entry — but veteran Cory Mac won comfortably on a .505 to .549 holeshot.

“If he had left on time, we would have won it,” lamented Reehl. “I always joke with Cory that he took my Wally.“

“They really surprised us in that final,“ McClenathan told me earlier this week. “That was not at all what we expected from those guys. I left on him, not by much, but enough. He came over and congratulated me. He was a very humble guy, I didn’t know what he was saying, but his interpreter was very fluent in English and also very nice. I always felt like Yuichi was happy to be there racing in the U.S.”

According to Reehl, Oyama ran out of money at the end of the year and the car sat all winter until Oyama called him and asked if we were going to run the car at the Winternationals, but he told me he wanted me to run it. He didn’t send me any money, so I just made enough runs to qualify and cover my expenses.

“He had me send some of the parts to Japan so he could run his car there, and I wrote him a check for the car that I kept,” Reehl reports. “I still made enough money off of the deal to allow me to do other things, including buying some commercial property and to start my business [Reehl Equipment]. It made a big difference.” 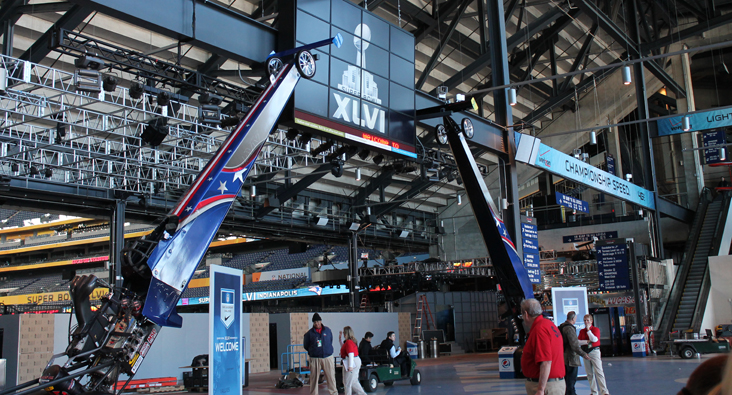 Reehl held on to the chassis for another year or so before parting with it, but knows it ended up in a good home: It’s one of the two Top Fuel dragsters on display at Lucas Oil Stadium, home of the NFL’s Indianapolis Colts.

I’m not sure what became of Oyama. I did a rudimentary search of FaceBook that yielded about 20 Yuichi Oyamas, but because I’m not friends with any of them, mostly it was just the basic page you see. Some offered some bio info — a policeman from Sennan-shi, a baseball fan from Hiroshima, a foodie from Morioka, and a 2006 high-school graduate from Akashi — but, clearly, none of those were him.

Regardless, he left an indelible mark in the minds of fans and the NHRA history book. Random racer? Hardly.