A four-time world champion and now 46-time national event champion, Taylor drove his '15 COPO Camaro to a 9.70 on a 9.64 dial to defeat Bill Sempsrott in his '66 Nova. Taylor now has six wins at National Trail Raceway including JEGS SPORTSnationals titles in 2005, 2008 and now 2019.

Jirousek, a runner-up in Saturday's K&N Shootout race, stayed sharp Sunday, capturing the victory in Super Comp by defeating Rick Pistole. Jirousek ran a perfect 8.90 on the 8.90 index for the win while Pistole ran too-quickly with an 8.89-second breakout.

The Super Gas title went to Deffenbaugh after he drove his '66 Nova to a 9.91 to defeat past NHRA world champion Jacob Elrod, who broke out with an 8.89 in his Corvette roadster.

A perfect 10.90 run in the Super Street final helped Unum earn his first NHRA title in his '69 Firebird. Unum won via a breakout after his opponent, Gary Horstmann, ran too quick with a 10.89. Horstmann was the winner of the 2017 JEGS SPORTSnationals in Bowling Green, Ky.

Wasko left with the trophy in Top Sportsman presented by Racing RVs.com when he drove his Pontiac GXP past the '69 Camaro of reigning Division 2 Top Sportsman champ Sandy Wilkins. Wasko finished the job with a 6.63 on his 6.60 dial-in while Wilkins lost despite a 6.66 on his 6.66 dial.

Nelson took over the championship points lead in Top Dragster presented by Racing RVs.com when he stopped David Maggard in the final. Nelson, who has now won three races this season, had a nearly perfect .001-second reaction time and sealed the win with a 6.13 on a 6.10 dial-in. Maggard was close behind with a 6.71 on a 6.70 dial.

Nash made the long trip from Texas pay off when he rode his Suzuki to the title in the Sportsman Motorcycle class. Nash won the final with an 8.07 on his 8.03 dial-in against Dave Gautreaux, who missed his 9.00 prediction with a 9.09.

Ray Connolly and Devin Isenhower, a pair of former NHRA world champions, displayed their talents Saturday at the JEGS SPORTSnationals at National Trail Raceway with victories in the special K&N Super Shootout races.

Isenhower, the reigning Super Gas champion, turned his attention to Super Comp this year and emerged with a victory with an 8.93 to 8.91 holeshot win over Chuck Ridenhour in the final round.

Connolly earned the win in Super Gas in his '63 Corvette when he drove past Mike Jirousek in the final, 9.93 to a 9.88. Both drivers were driving '63 Corvette roadsters.

Brown drove his Dodge Dart to the Super Street title with a close 10.867 to 10.860 win over Brandon Dutton. The Super Shootout events were open to the top eight qualifiers in each of the NHRA "Super Class" categories.

In the Racing RVs Fast Four final rounds, Danny Nelson and Lester Johnson earned wins in Top Dragster and Top Sportsman, respectively. Nelson drove his dragster past JB Strassweg with a 6.21-second elapsed time. Earlier in the day, Nelson surrendered the No. 1 qualifying spot in Top Dragster to Al Peavler, who ran a 6.111.

Johnson drove his popular '55 Chevy to a 6.14 elapsed time in the Top Sportsman final to hold off Jeff Brooks, who slowed to a 10.41 in the final. Johnson also managed to hold on to the top spot in Top Sportsman qualifying with a 6.121-second elapsed time.

The final round of the C-Tech Fast Four for Comp racers was to feature Brian Browell and Chad Voges, but with racing extending late into the evening, they elected not to run and split the purse. Browell did manage to take the top qualifying spot in Comp after driving his six-cylinder dragster to a 7.200 (-.640) run earlier in the day.

David Rampy, Dan Jacobs, and Jerry McNiesh were the quickest qualifiers in Comp, Super Stock, and Stock, respectively, after the opening day of qualifying for the JEGS SPORTSnationals.

Rampy, of Piedmont, Ala., is the most successful racer in the history of the Comp Eliminator class and one of just four drag racers to collect 100 national event victories. He quickly established thepace here by driving his '32 Bantam roadster to a 7.248-second elapsed time (0.572 second under the index). Rampy leads a competitive field that also includes national event winners Brian Browell, Lee Zane and Greg Kamplain.

Jacobs, of Elizabeth, Ind., drove his '05 Chevy Cavalier to a 9.241, which was quick enough to take the pole in Super Stock over Russ Campbell, Ronnie Terrell and Bill Rink, who are the top four qualifiers in the strong 78-car field. Comp low qualifier Rampy is also a top contender in Super Stock after driving his Chevy Camaro to the No. 6 spot.

In Stock, McNeish, of Eldersburg, Md., sits atop a robust 93-car field with his four-speed '67 Camaro. McNeish ran a 10.457 on the 11.50 D/Stock index to take the No. 1 spot ahead of Steve Sullivan and George Wright, who are also one second under their respective indexes. Racers in Stock and Super Stock used Friday's qualifying rounds to prepare for the highly-anticipated class eliminations on Saturday.

The Day 1 leader in Top Sportsman presented by Racing RVs.com is Johnson, of Cynthiana, Ky., who powered his swift '55 Chevy to a 6.121 to pace the 32-car field. Johnson, a past winner of the JEGS Allstars event, enjoys a sizable lead over No. 2 qualifier Jeff Brooks (6.452) and No. 3 Boyd Beyer (6.476). The top 23 qualifiers in Top Sportsman have run in the sixes.

Nelson, Batesville, Ark., has been one of the hottest drivers in the Top Dragster class lately and he's the leader here after running a 6.119 on Friday. Nelson leads Brian Keller (6.140) and Danny Waddle Jr. (6.181). There are two more qualifying sessions remaining on Saturday. 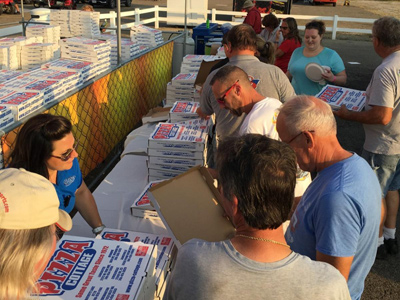 On Friday night, all racers and crew gathered for Pizza and Movie Racer Appreciation Night hosted by NHRA, JEGS, and National Trail Raceway as a way to thank the participants. Talladega Nights: The Ballad of Ricky Bobby played on a 20-foot outdoor projection screen, with catered-in pizza, popcorn and soft drinks for all to enjoy.

Final eliminations will begin on Sunday and run throughout the day culminating with winner's circle celebration and the awarding of the coveted NHRA Copper Wally that is earned only at the JEGS SPORTSnationals.

The JEGS NHRA SPORTSnationals, historically one of the finest weekends of NHRA Sportsman racing, kicks off Friday at National Trail Raceway outside of Columbus, Ohio. The event returns to National trail, the hometrack for the JEGS Mail Order team, for the first time since 2015, for three days of intense racing action, Sept 20-22.

National Trail Raceway has been in operation since 1964, and with new ownership and management, the facility has undergone multiple improvements over the past two years, inviting racers back to “The Super Strip” for an exciting weekend of NHRA Sportsman Drag Racing.

The event will once again feature Sportsman racers from across the country and a purse of over $108,000 along with special bonus races and national event contingency payouts.

Racing action starts on Friday morning as the racers take to the track for qualifying runs. Super Stock, Stock, Super Gas, Super Street, and Super Comp along with Top Dragster, Top Sportsman, Comp Eliminator, and Sportsman Motorcycle will compete throughout the weekend.

On Friday night, all racers and crew are invited to “Pizza & Movie Racer Appreciation Night” as the NHRA, JEGS, and National Trail Raceway thank the participants with pizza and a movie.  Talladega Nights will play on a 20 -foot outdoor projection screen, with catered-in pizza and soft drinks for all to enjoy.  Fresh popcorn will also be available and, with a bonfire nearby, racers are invited to bring their Smores fixins’.

Final eliminations will begin on Sunday and run throughout the day culminating with winner’s circle celebration and the awarding of the coveted NHRA Copper Wally that is earned only at the JEGS SPORTSnationals.