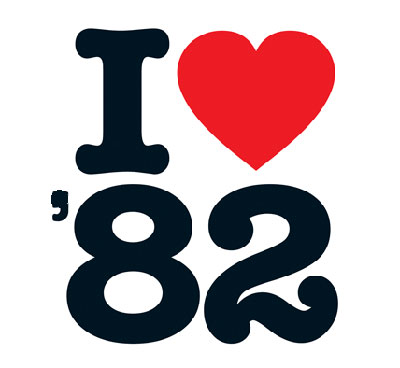 After a busy Western Swing (sorry for skipping a few columns), I’m back in the saddle for the run up to Indy and beyond, so let’s get this party started.

Folks got a big kick out of the 1988 edition of the Dragster Insider Time Machine a few weeks ago, so I thought I’d jump into the Wayback Machine again this week, setting the dials for 1982, a very special year for yours truly for it was in May of that year that I first joined the NHRA team.

Even though it was 36 years ago, I remember much of it like it was yesterday, yet can’t believe it’s been that long ago and how much has changed.

The Big Deal of the Day, as we used to say (well, as Monty Hall used to say) was the major change to Pro Stock rules that abandoned the corporate weight breaks that had been in place since the category’s inception in 1970 to even the playing field between makes and big- and small-block engines in favor of a straight-across-the-board 500-cid engine limit and a 2,350-pound minimum weight. The weight breaks, often changed between events, were nothing but a headache for the NHRA and its racers and seldom satisfied anyone.

Pre-season testing at Orange County Int’l Raceway yielded a best of 7.87 by Bob Glidden in his new Ford EXP and the late, great Lee Shepherd was credited with NHRA's first official seven-second Pro Stock pass with an off-the-trailer 7.86 in the second pairing of the first qualifying session at the Winternationals. Frank Iaconio, who ran a national record 7.82, won the event.

"Big Daddy" Don Garlits unveiled his radical "sidewinder" Top Fueler, with its transverse-mounted engine, at Orange County Int'l Raceway's Grand Premiere in California but lost a match race to Shirley Muldowney's new Pioneer dragster, 2-1. Kenny Bernstein also had a but of a rough go as he rolled his new Budweiser King LN-7 during a burnout for a photo session at OCIR the Friday before the event. According to reports, the car was equipped with shorter-than-normal headers and when the car dug in on hook there was nothing to stop it from turning turtle. 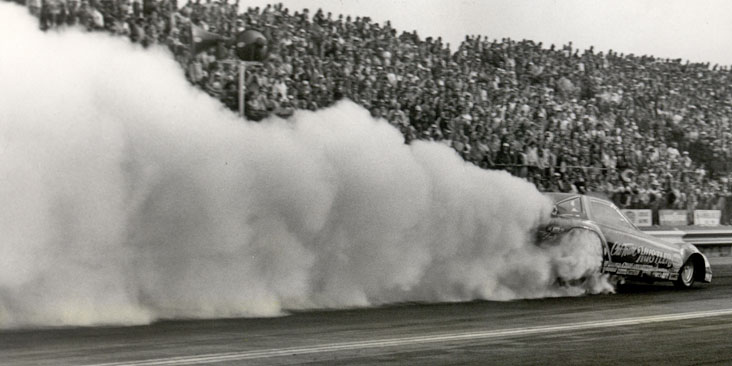 In a portent of things to come, Frank Hawley, the season's eventual surprise Winston champ, won the OCIR Funny Car show in the Austin Coil-tuned Chi-Town Hustler then qualified No. 1 and was a semifinalist at the Winternationals, losing on a 5.97 to 5.96 holeshot to Raymond Beadle.

The season started with a couple of big announcements with series sponsor Winston upping the season payout $50,000 to $200,000 and Budweiser announcing the creation of the Big Bid Shootout, which paid $25,000 to the winner of the special eight-car Funny Car field at the U.S. Nationals. On the NHRA staff front, longtime NHRA officials Bernie Partridge, Steve Gibbs, and Carl Olson were named NHRA vice presidents in charge, respectively, of field operations, competition, and industry relations and safety.

The Winternationals also was the home of a couple of major Sportsman-racing changes. Super Gas, its hit-the-index-based format long a SoCal favorite (though known locally as Pro Gas), made its debut at the Winternationals and remains a staple of NHRA national event competition. The event was also the first time the Alcohol Dragsters and Alcohol Funny Cars, which since the early 1970s had run against one another in Pro Comp, held separate eliminators (a 16-car field for the dragsters, eight for the Funny Cars), with the two winners -- Bill Barney and Chuck Beal, respectively -- facing off for the overall title, which went to Barney.

In another portent of things to come, Shirley Muldowney and Lucille Lee squared off in an historic, all-female Top Fuel final at the March Meet. Lee, who had been a semifinalist at the Winternationals in the first start of her first full year of racing in Marc Danekas’ TR-3 dragster, took the title, 5.79 to 5.93. Tom Ridings beat Tripp Shumake for the Funny Car title.

Muldowney bounced right back and won the Gatornationals, beating Garlits in a classic final round. Oddly enough, it was just the second -- and final -- time the two giants of the sport met in an NHRA final round. The first was Indy '75, where "Big Daddy" beat her in her first Top Fuel final. Muldowney was joined in the winner's circle by Hawley, who scored his first career win and let everyone know that the Chi-Town gang was for real, and Shepherd, who everyone already knew was the real deal. Not long Muldowney's win, it was announced that a major motion-picture studio was planning a film based on Muldowney's life, which would become the popular Heart Like A Wheel, starring Bonnie Bedelia as Shirley. Filming began in June at OCIR. Kelly Brown and Tommy Ivo did the stunt driving. 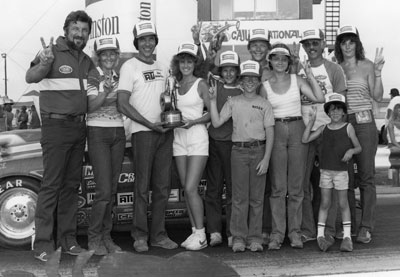 The Sportsman-only SPORTSnationals was rained out in its debut at its new home, Houston Int'l Raceway. The race was rescheduled to conclude in late May, but then rained on again (that happened in my first week on the job). Ronny Young, who would later pilot the post-beadle Blue Max, won Alcohol Funny Car in his Shockwave Trans Am, but the all other eliminators were completed at the Cajun Nationals.

At that event, Ray Martel (pictured aboveright) made history when he won the rain-delayed portion of the SPORTSnationals Saturday as well as the Cajun Nationals title Sunday, becoming the first driver to double (sorta) at an event. The first true double wouldn’t come for another nine years, when Pat Austin won Top Fuel and Alcohol Funny Car at Indy in 1991.

Prudhomme also made history with the sport's first 250-mph Funny Car run, a 250.00 in qualifying. Oswald, at the wheel of the Candies & Hughes Top Fueler, Beadle, and Shepherd defeated eight-car fields (remember those?).

Muldowney and Hawley were joined in the Springnationals winner's circle by Glidden, who scored for the first time in more than a year to end one of the longest droughts of his storied career. Muldowneys win came with a vindicating final-round victory over Lee.

Connie Kalitta won his first Top Fuel title since the 1967 Winternationals with a satisfying final-round victory over Muldowney at NHRA's annual trip north of the border for Le Grandnational Molson; Prudhomme and Shepherd were the other Pro winners.

One of drag racing’s lost-standing “bests” finally fell when Mark Oswald broke Garlits' incredible 7-year-old 5.63 national record, set at the 1975 World Finals, with a 5.618 in Top Fuel qualifying en route to winning the Summernationals; his speed of 254.23 also was a national record. Meyer set both ends of the Funny Car mark with a 5.82, 250.69, but his unbacked-up 254.95-mph shot (reportedly with a nitrous-oxide assist) was faster than any Top Fuel run that weekend. Meyer did not win Funny Car, though; that honor went to Prudhomme. Adding to the weekend's histrionics was Warren Johnson's first career victory in Pro Stock. Also of note, Scott Kalitta qualified in his Top Fuel debut.

Dwight Salisbury scored his only Top Fuel win at the Mile-High Nationals, where he was joined in the winner's circle by Meyer and Shepherd. For the second straight event, Meyer's top speed was faster than that of the fastest Top Fueler. 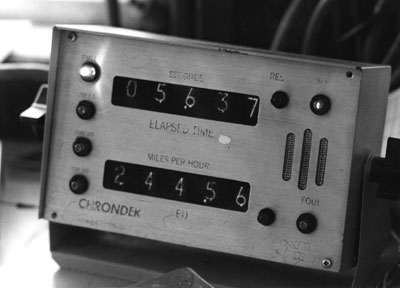 Muldowney and Meyer won the nitro titles at the U.S. Nationals, but Beck and Prudhomme were the performance stars: Beck ran the sport's first sub-5.50-second pass, a 5.48 in round one of Top Fuel, and Prudhomme ran a crushing 5.63 in Funny Car qualifying. The best ever Funny Car e.t. before the event was a 5.82. (Rumors about "Snake's" use of nitrous oxide in the class ran rampant, but were they true? Read this past Insider column.) Ken Veney also stunned a lot of people with 254.23 that set the Funny Car national record. Hawley won the first Big Bud Shootout, beating Prudhomme in the final.

Beck and the Larry Minor dragster ran the sport's second-quickest e.t., a 5.52, but later lost to Connie Kalitta in the Top Fuel final of the Golden Gate Nationals. Bernstein and W.J. were the other Pro winners. Muldowney, Hawley, and Shepherd locked up Winston championships at the Winston World Finals at OCIR, though none of them won. Jim Bernard won his first and only Top Fuel title, Shumake drove Meyer's "blocker" car to the Funny Car win, and W.J. aced Shepherd in Pro Stock.

Meyer closed out his fabulous year by winning OCIR's Manufacturers Funny Car Championships, which fell on the 10-year anniversary of his first big win at this race as an 18-year-old with just four months' driving experience. 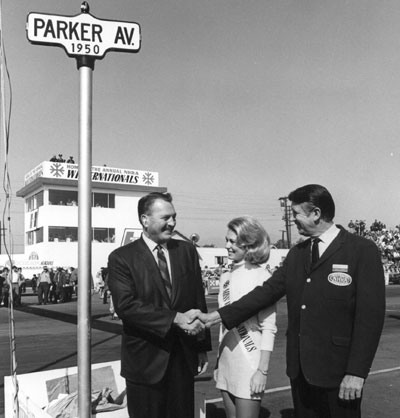 The year was not without some pretty tough losses. Former Pomona Chief of Police Ralph Parker, the man most responsible for getting the Winternationals to make its home at the Los Angeles County Fairgrounds and for whom the quarter-mile there is nicknamed "Parker Ave.," died New Year's Eve, 1981. In January, Modified Fuel roadster racer "Flaming Frank" Pedregon, father of the future trio of fuel-racing siblings (Tony, Cruz, and Frank Jr.), was killed in a plane crash in Mexico. In June, Pro Comp racer Joe Amato of Las Vegas, not to be confused with another former Pro Comp racer who would eventually go on to win five Winston Top Fuel titles, was killed in a highway accident. In October, Funny Car veteran Paul “Wrong Way” Radici and drag racing pioneer Emory Cook both died.

Man, is it just me or did the 1980s pack more firsts and wild things than any other decade? Maybe it’s just me. Got a favorite year you want reviewed? Let me know!