In its more than 30 years of existence, Wild Horse Pass Motorsports Park (née Firebird Int'l Raceway) has been the site of some amazing Top Fuel moments that spotlight some of the classes biggest names, including Don Garlits and Shirley Muldowney.
23 Feb 2018
Phil Burgess, NHRA National Dragster Editor
DRAGSTER Insider 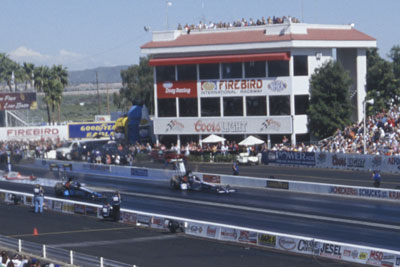 By the time that most of you read this, I’ll be sitting trackside in Phoenix, at Wild Horse Pass Motorsports Park for the start of the NHRA Arizona Nationals. It’s always fun heading to this track because a) it’s just an hour’s plane flight from my California base and b) it brings back a lot of great memories from its beginnings in 1984, back when it was known as Firebird Int’l Raceway, and when it played a starring role in some mid-1980s Top Fuel drama.

The track, located in Chandler, Ariz., less than a half hour outside of Phoenix, was built by former NHRA Funny Car racer Charlie Allen in the wake of the demise of one of Southern California’s legendary tracks, Orange County Int’l Raceway, which Allen had owned and managed in its final four seasons (1980-83). 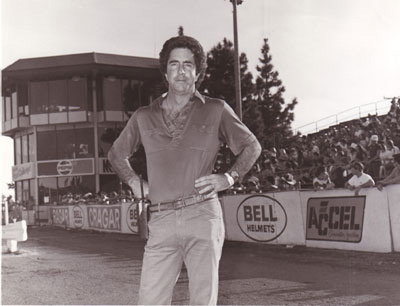 With the handwriting on the wall of OCIR’s demise — the land had become way too valuable and the land’s lease holder wanted it back — Allen began construction of his desert oasis in mid-1983, even as OCIR was working its way through an emotional but action-packed final season. Match racing was still a thing back then — the NHRA national event calendar was comprised of just 12 events in 1983, leaving plenty of spare time for teams to crisscross the country and entertain fans at venues big and small — so Allen sought to keep that flame burning.

“I think I was very lucky to have the success we had [at OCIR] in the track’s final couple of years,” he told me a number of years ago. “That success made me realize that I wanted to keep doing this, which is why I built Firebird Int’l Raceway.” In a weird coincidence, the size of drag boat lake at the new track, 113 acres, is exactly the size of the former OCIR parcel.

I remember my first trip to the track in early 1984, for an event called the Super Bowl of Drag Racing (this was long before the NFL cracked down on extraneous uses of the name of its trademark “big game,” and long before the track officially hosted preseason testing). Preseason match races prior to the Winternationals were nothing new. New Year's Day bashes were commonplace and, more famously, Lions Drag Strip and, later, Irwindale Raceway, both hosted events called the Grand Premiere, and in the mid-1970s, Beeline Dragway, just north of Phoenix, had hosted the NHRA Winter Classic just before the Winternationals. 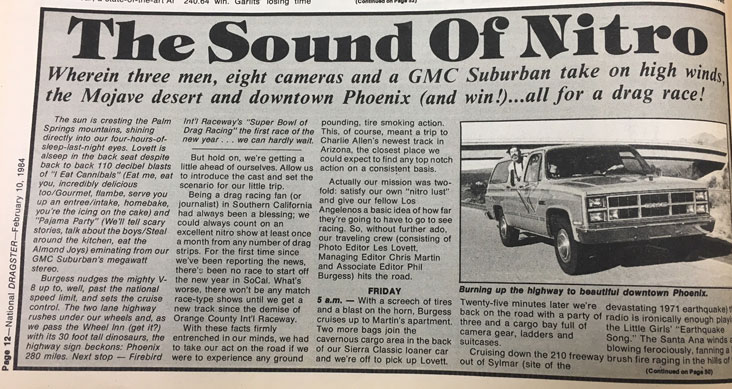 But as guys who had attended virtually every match race at OCIR for its final couple of seasons, and with it being the last SoCal match-race track — iconic Lions Drag Strip having closed down in 1972, Irwindale Raceway in 1977 — we loaded the NHRA National Dragster editorial staff up early one January morning in 1984 and drove from then-NHRA headquarters in North Hollywood, Calif., to Chandler, chronicling it for NHRA’s Southern California readers who might also want to know how to get there and how long it might take.

To be brutally honest — and we were in our coverage — Garlits and his then-four-year-old Swamp Rat 26 were literally and metaphorically covered in dust in the Firebird pit, and looked totally outclassed by Muldowney’s shiny pink Pioneer rig, and to many it looked like his glory days were finally gone. Little did we know. 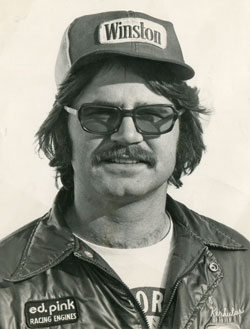 The 1984 season was a brutal one for Top Fuel. Already plagued with diminishing car counts and the resurging popularity of Funny Car, within a month that summer the tour lost two Top Fuel stars: popular Californian Doug Kerhulas (right), who was injured in a catch-net incident in Columbus, and, in a heart-jolting Montreal moment, Muldowney. IHRA had already decided to pull the plug on Top Fuel and throughout the long summer it seemed like the class was on life support with NHRA, too.

Then Garlits and his team of self-proclaimed “dinosaurs” answered the call and decided to race at Indy, thanks to the backing of longtime pal Art Malone. Suddenly, it was vintage Don Garlits all over again as “Big” won his sixth “Big Go.” There may not have been a bigger or more popular — or important — win in the class' history.

Garlits continued his late-season romp, beating Beck's Miller Lite dragster with low e.t. in the final round, 5.59 to 5.65, then continued on to Pomona and won the Word Finals, too, setting up his 1985 and ’86 championship seasons. I heartily believe that Garlits’ Indy win, the Firebird show, and the creation of a Top Fuel bonus event (the Cragar/Weld Top Fuel Classic, which debuted in 1985), helped save the class, and the Phoenix track had a lot to do with that.

Garlits’ late-1984 success prompted him to replace the aging Swamp Rat 26 with a new car, dubbed Swamp Rat 29, for his 1985 assault on reclaiming the world championship he had last won a decade earlier. (Swamp Rat 27, built in 1983, was his ambitious but short-lived sidewinder; super-light Swamp Rat 28, also built in 1983, proved too flimsy for conventional Top Fuel competition and was run with turbine power in limited AHRA competition.) 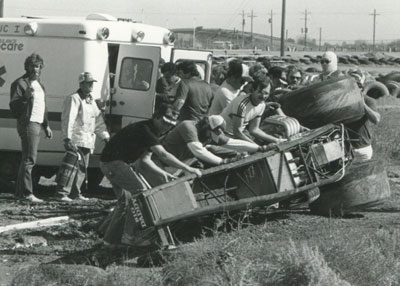 Built in just 43 14-hour days, Swamp Rat 29’s debut at Firebird’s 1985 Super Bowl event was a mixed bag. He trounced Beck in three straight matches, with the last coming on a 5.45 pass, a new track record and the quickest run of his career, but as SR29 cleared the traps, the rear wing struts — Garlits later conceded he’d made them too thin — collapsed, followed by the expected loss of control. Where Garlits’ dragster had parked in the dirt in 1984, this time it ended up rolling around in top-end mud, fortuitous only in that it cushioned the multiple rollovers.

Garlits saw the mud and the recent rainshowers that had caused it, and the fact that he didn’t receive as much as a bruise, as a sign from above to continue racing. He and his late, great crew chief, Herb Parks, went home, repaired the car, and went on to Pomona. Although he didn’t win the Winternationals (that might have been too big a tale for even “Big”), they did win six events that year — including Indy again, the middle leg of three straight U.S. Nationals titles — and won the world championship. 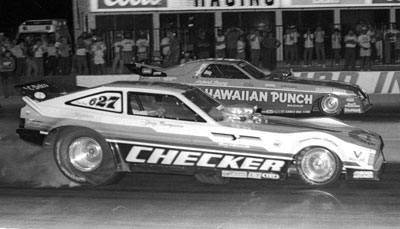 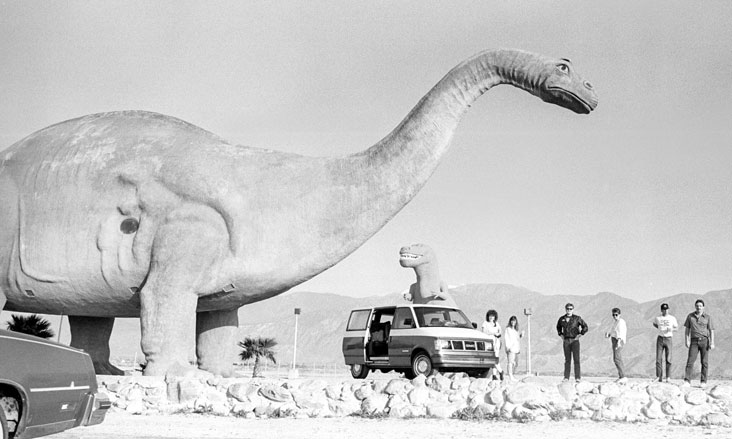 Although my trips to Phoenix weren’t anywhere as frequent as my trips to OCIR had been, we still found time each January to make the annual trek for the Super Bowl. I really love this photo, which reminds me of an album cover shoot, as we stopped for a leg stretcher at the iconic "World's Biggest Dinosaurs" exhibit off Interstate 10 in Cabazon, Calif., en route to the 1986 Super Bowl. What’s especially nostalgic for me is “the band,” which included a trio of friends no longer with us. From left is current ND Photo Editor Teresa Long, then Jackie Miller, current ND advertising honcho Jeff Morton (then one of my staff writers), Tammy Ferrell, former ND staffer Chris Martin, and yours truly. Jackie worked a number of jobs at NHRA, including travel coordinator, and “Tammy Sue,” the daughter of Division 3 Director Keith Ferrell who later married Kalitta Motorsports crew chief Jim Oberhofer, worked in the publicity department. We later lost both to cancer (in 2000 and 2013, respectively) and Martin in 2010 to complications of diabetes and other ailments. 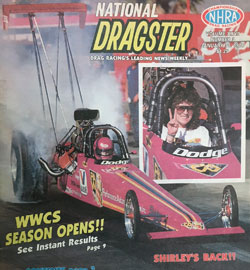 That ’86 Super Bowl was the site of Muldowney’s return to the cockpit, and everyone wanted to be there to see it. Even Wally and Barbara Parks, who had a winter home in Sedona, Ariz., showed up to wish her well. I remember jostling with fans and a large number of media crowded around her pit area as the team fired the nitro Hemi. The smile on her face was what we had all come to see, and one that graced the cover of that week's issue. The car later ran a very competitive 5.59. The track also, of course, was the site of the 18th and final national event win of her career, in the fall of 1989. Very fitting.

The track’s long tenure is packed with other historical moments, many of them steeped in Top Fuel lore. Who can forget Tony Schumacher becoming the first Top Fuel racer to exceed 330 mph at the 1999 event, or the now mythically legendary 1992 event, site of NHRA’s first live final-round TV broadcast, and where Pat Austin doubled up, winning in both Top Fuel and Top Alcohol Funny Car?

Schumacher’s 330-mph pass was an eye-opener because, until then, no one had really thought of the facility, which sits at some altitude in dry climes, as a “performance track” on par with the likes of Pomona, Gainesville, Reading, et al. But, as the last few years have proven out, the track can dish out the big numbers. Last year’s preseason testing produced the unofficial quickest passes in Top Fuel and Funny Car, by Leah Pritchett and Courtney Force, respectively, and Pritchett’s return for the NHRA Arizona Nationals a few weeks later resulted in a win and an official national record.

I’ll be thinking about all of that this weekend, of remembering the track’s amazing past, of friends I met and friends I lost, and the wonder of this desert oasis.

I received a lot more suggestions (thanks!) for the unidentified faces in last  week's Winternationals group cartoon that I'll update next week, and even heard from Pete Millar's family, who were very happy to see his legacy recognized and offered to share more Millar stories and artwork with me in the future. Stay tuned!