Week two of “the Mongoose” watch goes on as fans and friends continue to try to reconcile that he’s really gone. This week: No race cars, just photos of “the Mongoose” smiling and doing his thing.
22 Jun 2018
Phil Burgess, NHRA National Dragster Editor
DRAGSTER Insider 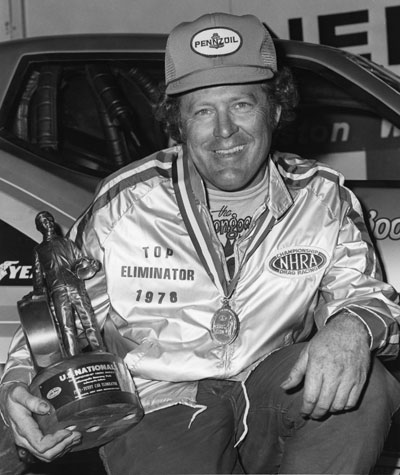 Week two of “the Mongoose” watch goes on as fans and friends continue to try to reconcile that he’s really gone. It’s been interesting to watch and listen to the reactions of his close racing buddies. They’ve been checking in on one another and getting together to share stories about Tom McEwen: the man, the myth, the legend. The outpouring of love from the fans –- online and in my Inbox –- has also been heartwarming.

Plans are already under way for a nice tribute in the next issue of National Dragster. I plan to put him on the cover (an advance “sorry" to any Bristol or Norwalk winners) and have a nice photo feature recapping his career. While the National Dragster photo staff was going through its vast archives looking for images for me, I did a deep dive into the file, too, looking for something else, which I present here.

No race cars, just photos of “the ‘Goose” smiling (like after winning Indy above right) and doing his thing, which is how I want to remember him right now. Enjoy. 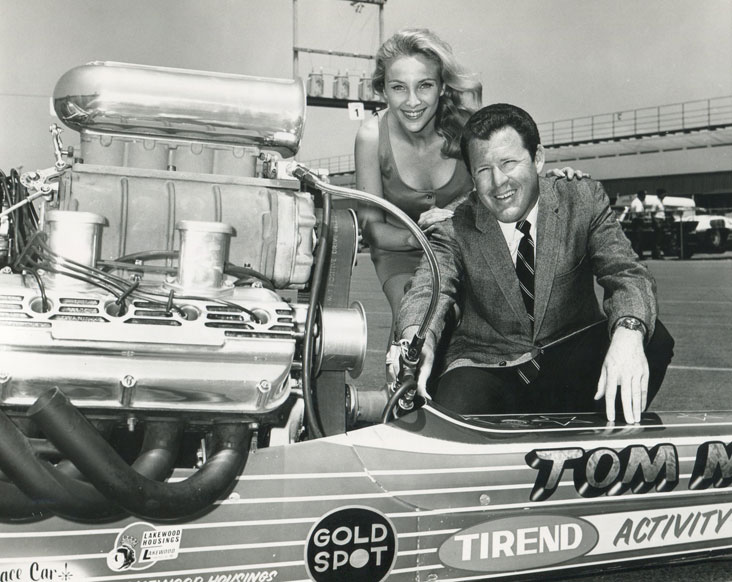 OK, so the stories about McEwen being the ladies man have been widely circulated. He was a good-looking guy with the gift of gab. Before the legendary Hot Wheels deal, he got some outside-the-box sponsorship from Tirend Activity Booster and Gold Spot breath freshener -– two things every ladies man needs, right? 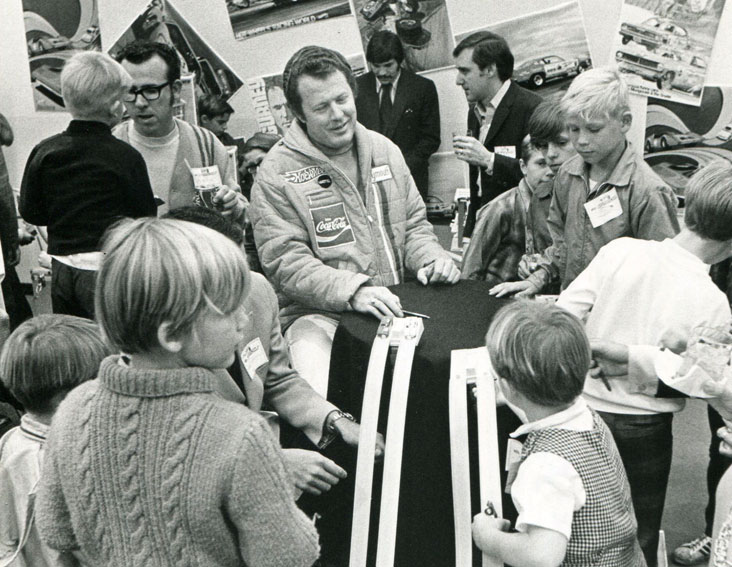 As a father of three, McEwen had a great love for kids, and the Hot Wheels deal was the perfect vehicle for him. He’s clearly enjoying himself with young fans at this Hot Wheels outing. 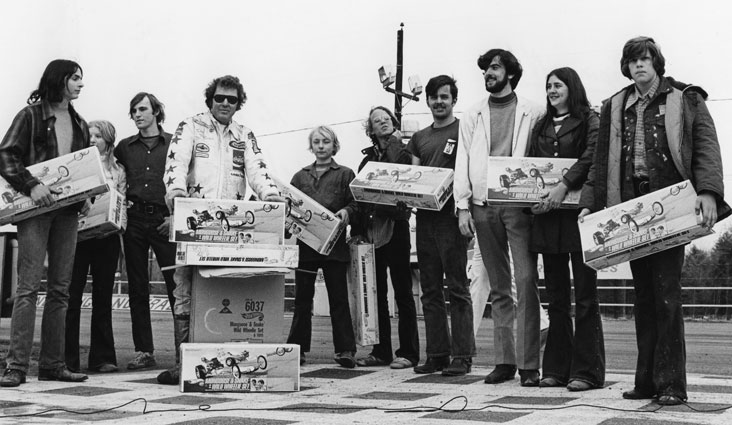 These lucky fans at New England Dragway in 1972 got to meet “the Mongoose” and walked off with Hot Wheels Wild Wheelie playsets. 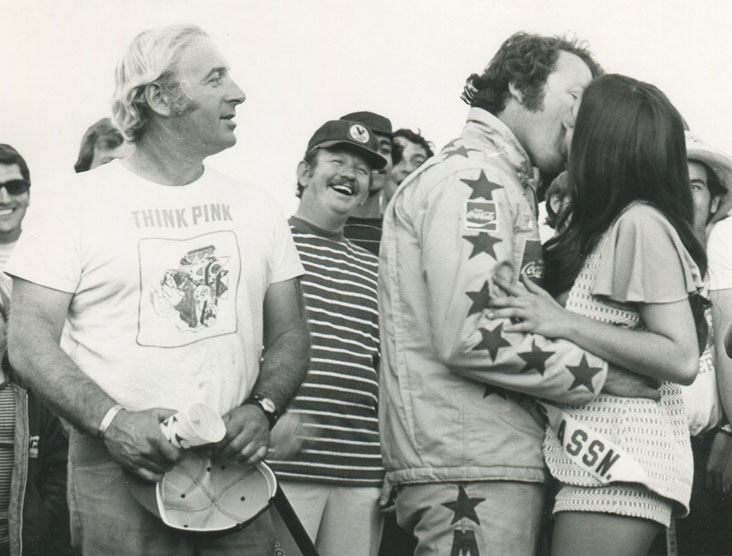 Yep, “Mongoose” always got the girl. That’s engine builder Ed Pink looking on, wondering where his love is for brewing the power. 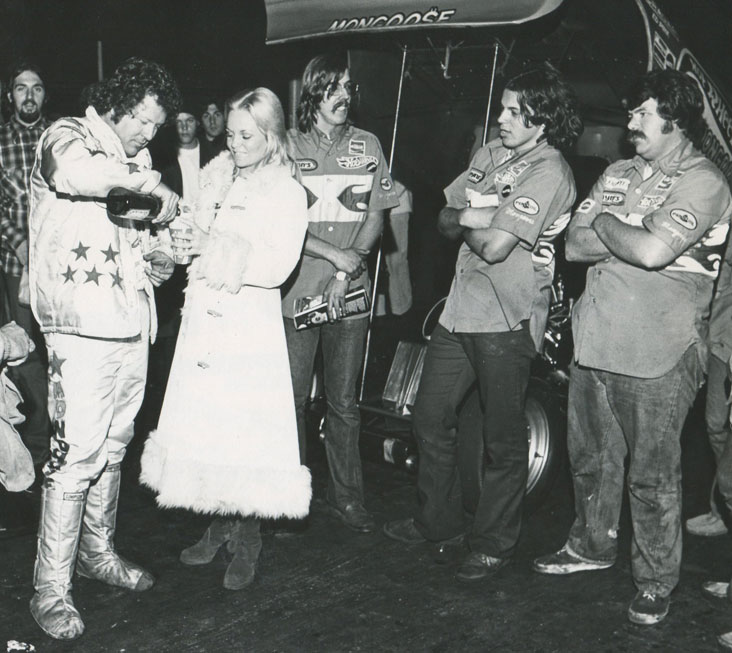 Donnie Couch, second from right, and the boys look on as McEwen pours the bubbly with another young lovely after yet another win. 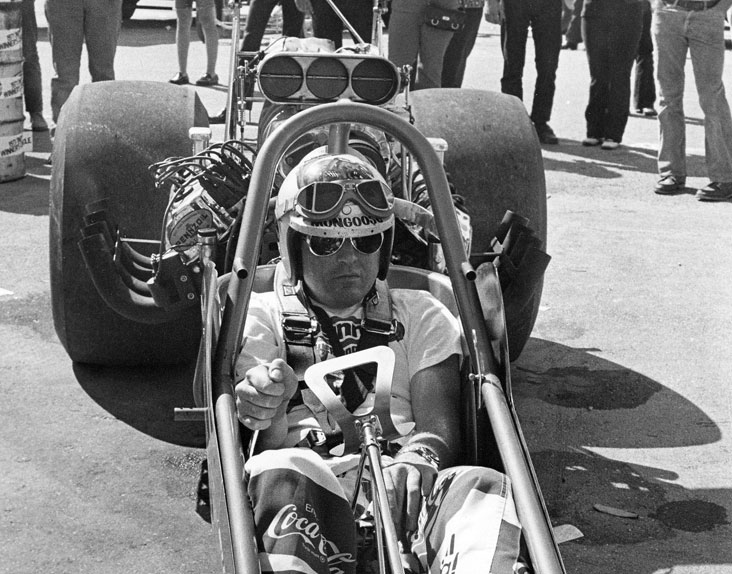 Not really smiling in this one but I love it. With the goggles up on his helmet, he looks like a World War I fighter pilot behind the wheel of his Garlits-chassised rear-engined Top Fueler. 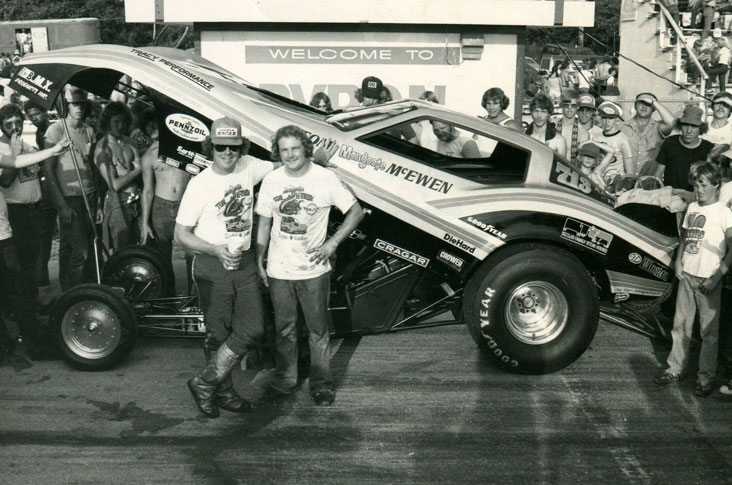 McEwen and longtime crewman Larry Board in the winner’s circle at Byron Dragway in 1978 after another win. 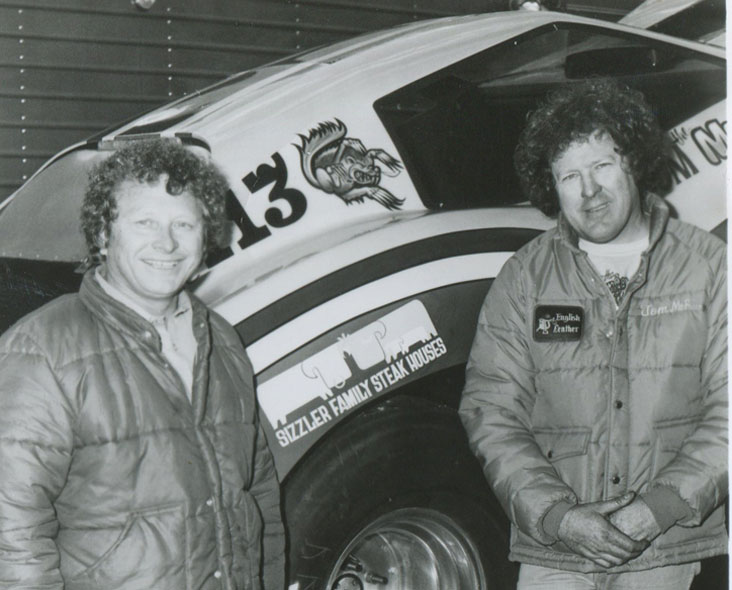 Billy “Bones” Miller was a longtime friend and financial supporter of McEwen. Miller owned a chain of Sizzler steak houses and the Mongoose BMX company and kept "the Mongoose" in parts. 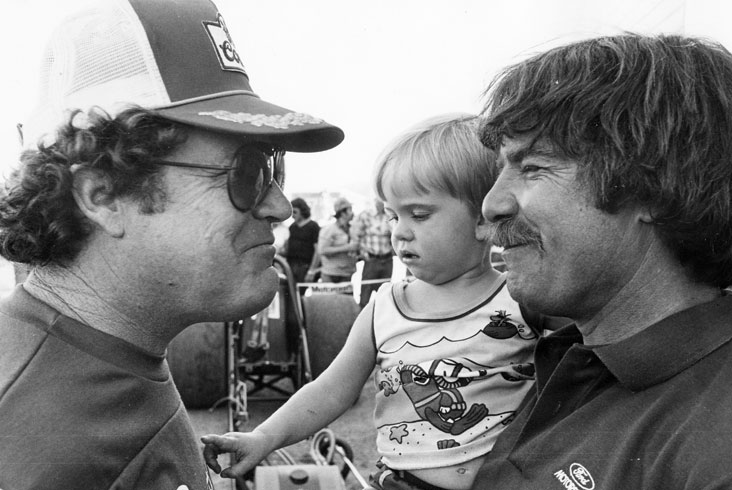 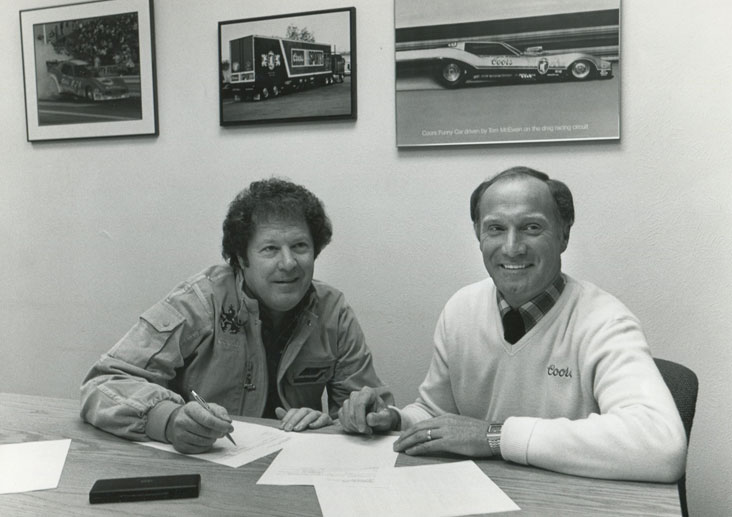 McEwen enjoyed a long and fruitful partnership with Coors beer. In this early 1983 photo, McEwen signs an extension with Coors’ John Ross at the start of his fourth of eight seasons with the company. 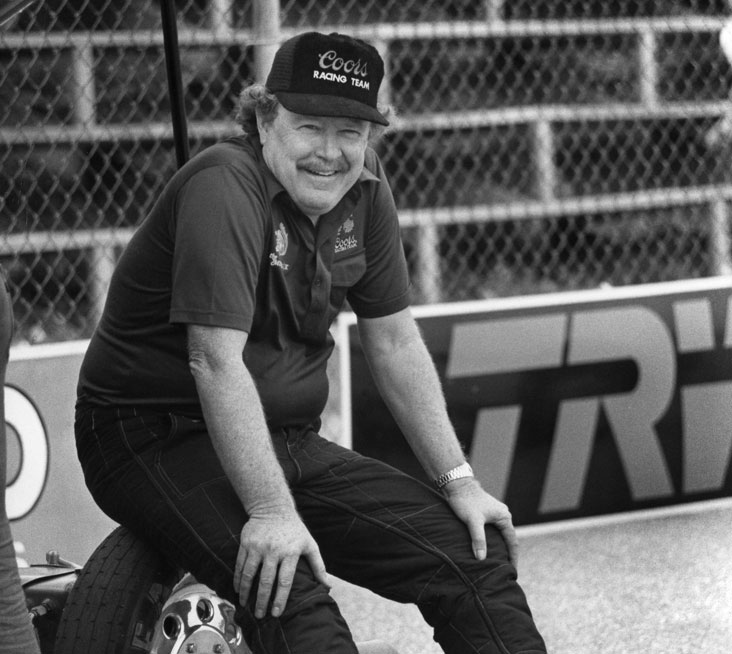 A great photo of the smiling “Mongoose.” 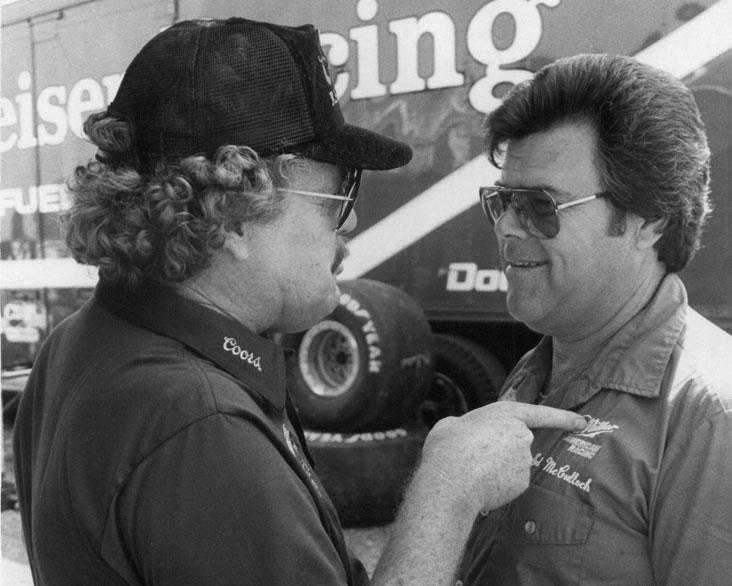 McEwen making a point (carefully, no doubt) with Miller-sponsored Ed McCulloch about the battle of the breweries. 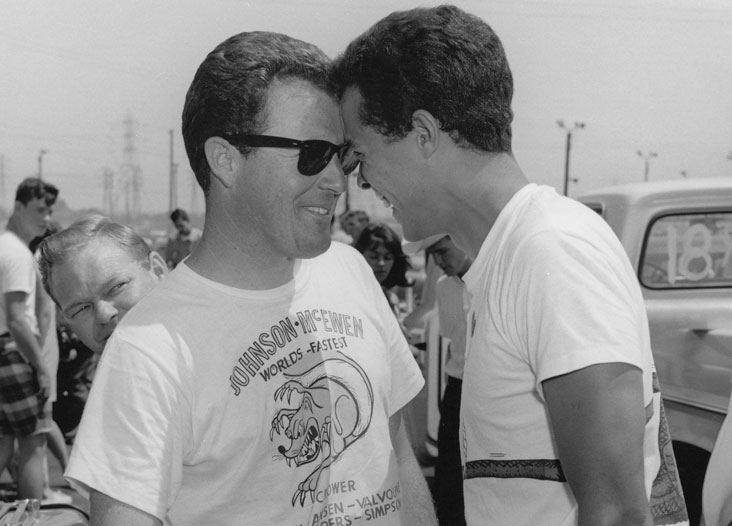 And, of course, no McEwen photo collection is complete without “the Snake,” Don Prudhomme. They didn’t always see eye to eye, but they did here in this 1970 photo. 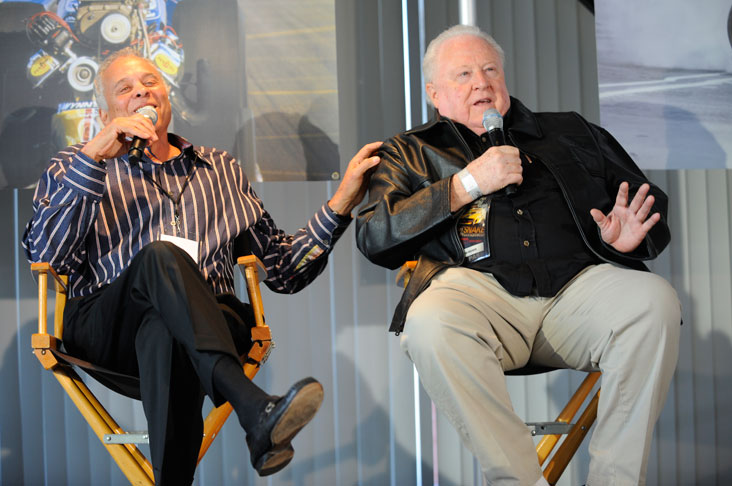 The boys on stage at the 2010 World Finals, telling tales and laughing over old stories. Together, they were magical, on and off the track. 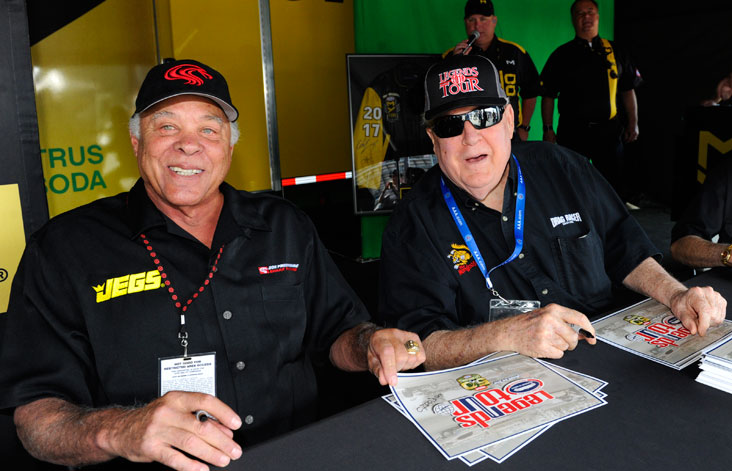 Just like old times, “the Snake” and “the Mongoose” signing autographs earlier this year in Las Vegas as part of the NHRA Legends Tour.

RIP ‘Goose. Thanks for the memories.