Brainerd Int’l Raceway, built in 1968 and host last weekend to the Lucas Oil NHRA Nationals, is celebrating its 50th season this year. Here's a look back at the track and the racing action over the years.
24 Aug 2018
Phil Burgess, NHRA National Dragster Editor
DRAGSTER Insider 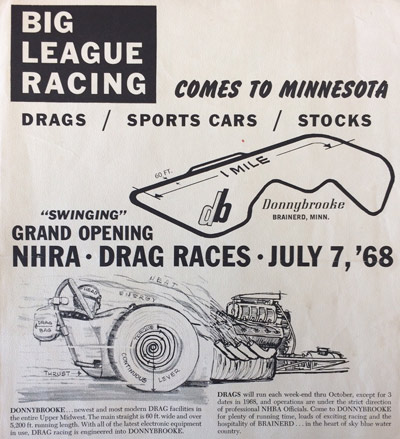 The NHRA Mello Yello tour pulled out of Brainerd this past weekend and headed for Indy and the Chevrolet Performance U.S. Nationals, but before we put the Land of 10,000 Lakes in the rearview, I wanted to take the opportunity to wish Brainerd Int’l Raceway a happy 50th birthday.

Geoff Gorvin, who handles publicity for the popular track, shared some track history and photos with me, and now I’m sharing them with you, along with images out of the NHRA archives.

Before it became known as BIR and long before NHRA planted a national event there in 1982, the track was known as Donnybrooke Speedway, and was a 3.1-mile, 10-turn strip of asphalt through woods and wetlands north of Brainerd.

Built in 1968 by George Montgomery, a retired airline pilot and amateur road racer, it was the only road course in the region for SCCA sports-car racing, filling a vital need.

“After opening, BIR was an instant hit, even with limited infrastructure: very little seating, few restrooms, limited concessions and camping,” said Garvin. “The track’s grand opening in August attracted 25,000 fans, who overwhelmed the track to watch the SCCA’s National Races. A line of cars stretched three miles down State Highway 371 as fans waited to get in the gates.”

The first official race in 1968 was an NHRA drag race won by Minnesota’s Doc Halladay, who was competing in Top Fuel in the days before his Telstar Funny Car.

Funny Cars became a mainstay at the track, especially after the track launched its Crown Auto Funny Car Championships. The success of that event and other BIR races helped NHRA decide that the region could support a national event, and the Quaker State North Star NHRA Nationals was born in 1982. Shirley Muldowney, Frank Hawley, and Lee Shepherd were the big winners at the inaugural event. 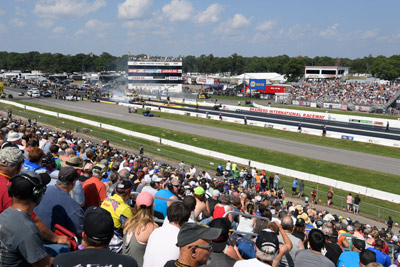 In the more than 35 years since that first NHRA event, the Brainerd dragstrip has become known as one of the quickest and fastest in the world. In 2003, BIR tore up its dragstrip and laid 700 feet of concrete and new asphalt down-track and the results have been impressive. Two years later, Tony Schumacher ran the fastest quarter-mile time ever at 337.58 mph. Recently, the Funny Car national record was set in back to back years in 2016 and 2017, the latter being Robert’s Hight’s barrier-busting 3.793 pass, which more than a year later remains the quickest pass in class history.

Over the years, the track has offered a wide variety of motorsports beyond drag racing and road racing, including karting, Superbike racing, snocross, NASCAR, endurance racing, drifting, autocross, lawnmower racing and watercross, which involves snowmobiles racing on open water.

Now under the control of racing enthusiasts Jed and Kristi Copham, the track has added even more road racing events to a track that has seen legends including actor Paul Newman, who raced as an SCCA amateur nearly every year from 1975 until 1988, and household names like Mario Andretti, AJ Foyt, Bobby Unser, Al Unser, Jackie Stewart, Dan Gurney, Parnelli Jones, Mark Donohue, and David Hobbs.

Here’s a photographic look back at some of the great drag racing that’s gone on there.

A photo from the opening day of racing in 1968; a pair of unidentified dragster pilots duel on the new dragstrip.

Funny Cars have been a big hit for years at BIR. Tom Hoover, left, and Don "the Snake" Prudhomme duel at BIR in the late 1970s.

Minnesota legend Hoover and his Showtime floppers were winners for years at Brainerd's events. 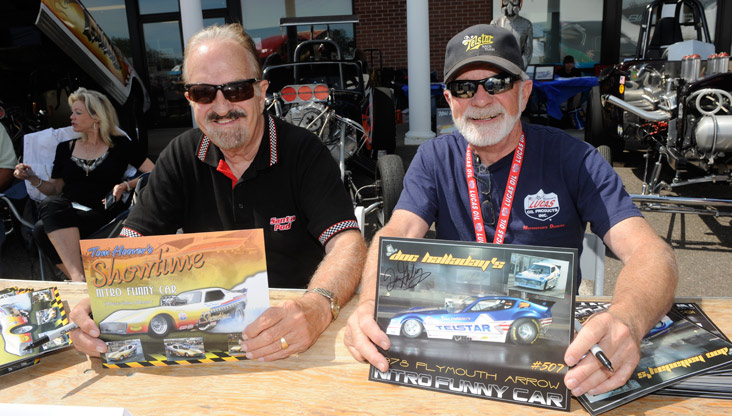 Hoover, left, and Halladay were saluted a few years ago at the event as track legends, and both also returned this year.

Some before and after pics. At left is the track in the 1980s, before the addition of the large grandstand but before the new tower. 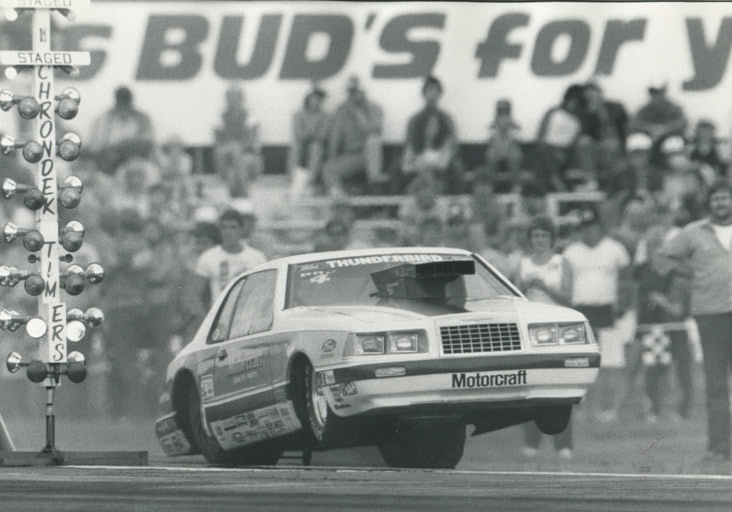 Before the three-story VIP tower was installed, there was a huge grandstand behind the starting line, reminiscent of Pomona in the 1970s. This is Bob Glidden, who won Pro Stock at the event four times: 1983 (pictured), '85, '86, and '92. 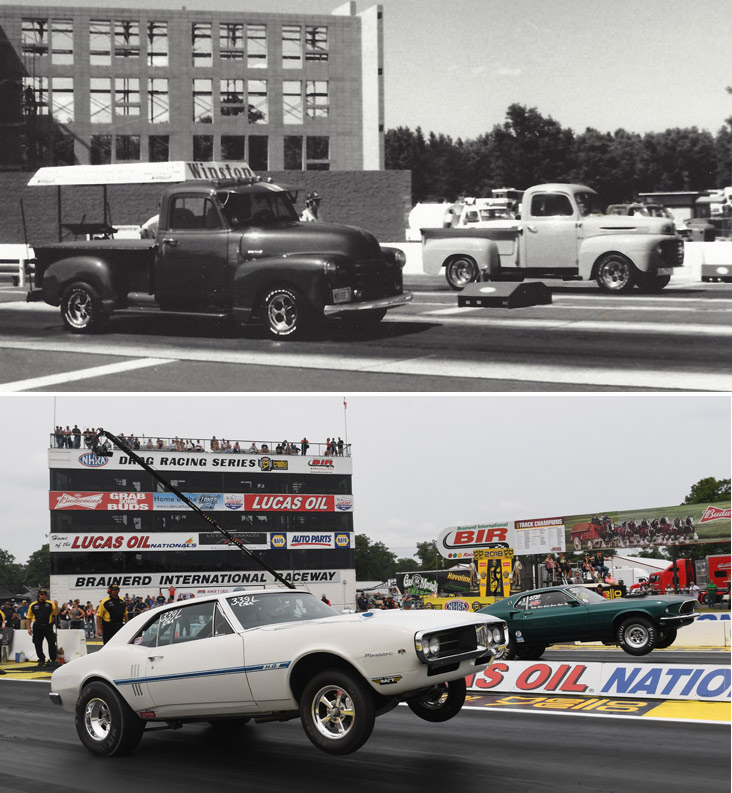 The tower under construction (top), as photographed during the track's Champion Auto Stores Street Rod-Street Machine Show & Go in 1982, and below that the view today. 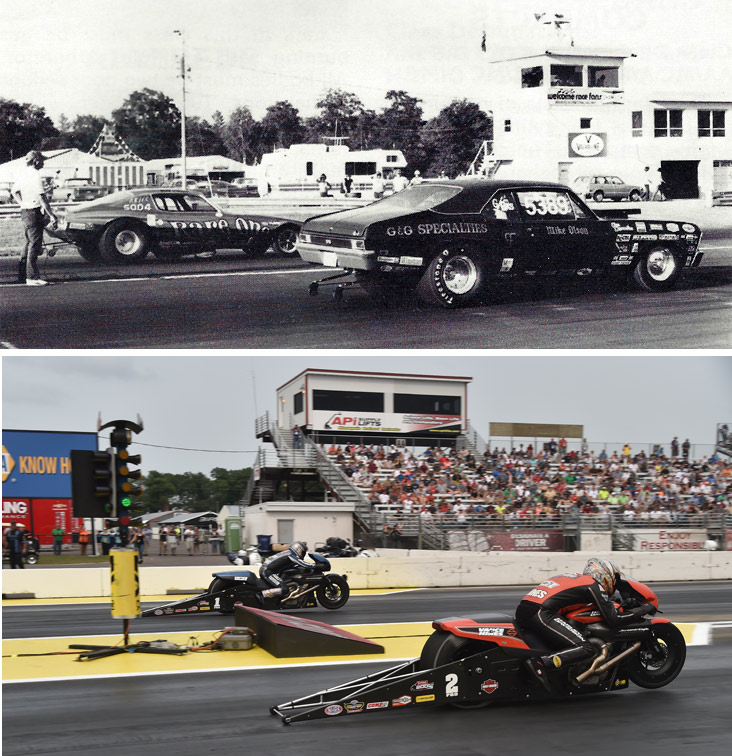 Before the big multi-story tower was added, announcing and race control sat at the side of the track (top) as part of a larger building. Today (above) that's gone and the media center now takes its place, perched atop new grandstands.

A couple of nice aerial photos (back when we used to send our photographers up in helicopters for this kind of stuff). At left shows just one of the state's famed 10,000 lakes (there are actually well more than 15,000): North Long Lake. The image at right shows the famed "Zoo," still popular (but much tamed) after all these years. 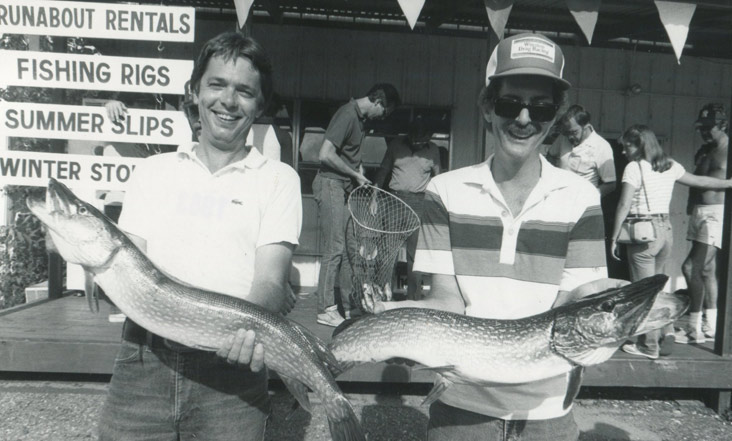 With all of those lakes, fishing used to be a big part of the Brainerd experience with pre-race tournaments. Above, former Top Fuel driver and then NHRA VP Carl Olson, left, and former National Dragster Editor (then working in the publicity department) Jim Edmunds showed off their catches,

Robert Hight made the sport's first 3.7-second Funny Car pass at the 2017 event. Brainerd has quickly become of the circuit's premier performance tracks. 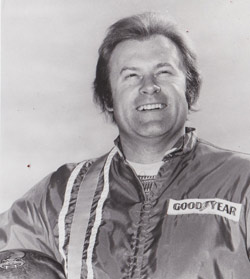 This column was well underway and planned before the passing last Friday of jet-car pioneer Doug Rose. I hope to have a story on him and his influence on the class in the next few weeks (as soon as possible, but Indy is next week and, well, that sorta speaks for itself), but I didn't want to go more than a week without mentioning him. I saw him and the famed Green Mamba run countless times at Southern California tracks and he was about as O.G. as it comes in that class, and I look forward to sharing his story, I've got some great pics already pulled (thanks to Mark and Laura Bruederle for the image above) to go with it. If you have any Doug Rose stories -- whether you be a jet-car racer who knew him or a fan -- send them to me now for inclusion; use the email address below.