Another farewell to heroes 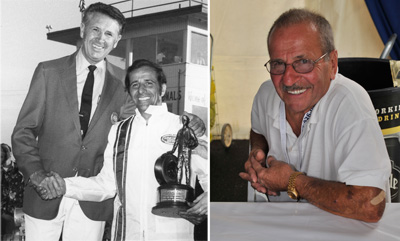 For more than a decade, King and partner Don Marshall owned some of the toughest race cars from the New England area with success in both nitro classes. The young friends grew up in neighboring cities in Rhode Island -– King in Warren and Marshall in Barrington -– and shared a love of hot rodding and together formed the King Pins club of the Southern New England Timing Association.

King drove a number of cars in those early days, beginning in the mid-1950s at the track in Orange, Mass., with a stock ’41 Ford before stepping up to a Buick-powered ’46 Chevy gasser and then a blown gas, Chassis Research K-88 chassised dragster with partner Lee Tatroe.

King worked for a while at Rhode Island’s hottest performance factory, Tasca Ford, which at the time fielded their series of “Mystery” Mustangs with drivers like Bill Lawton, giving King an up-close look at a pro team.

King and Marshall officially teamed up in 1967 after selling their collections of “toys” to gain the capital to go big-time drag racing with a 392-powered front-engined dragster in Top Fuel with a state-of-the-art chassis from Don Long.

Their most memorable and greatest moments in NHRA Top Fuel competition came about six months apart, in the fall of 1970 and the spring of 1971. 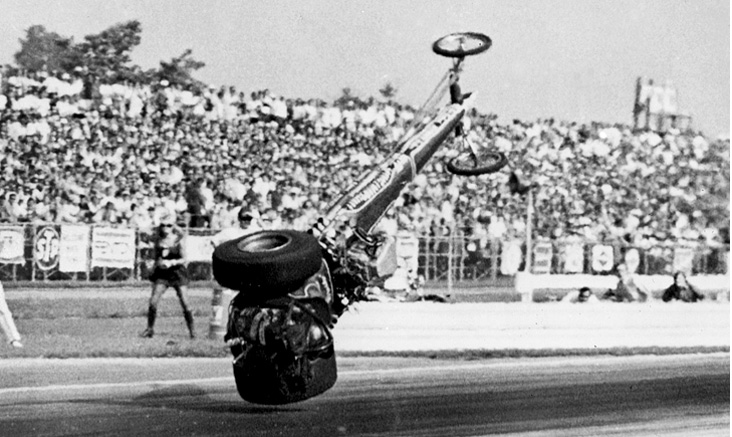 At the 1970 Nationals in Indy, King’s slingshot dragster launched into a big wheelstand just off the line and over-rotated -– not quite Top Fuel’s first blowover but a good facsimile of one –- and put him in his head. The crew wasted little time having fun with their driver, welding a caster wheel to the top of the rollcage in case he decided to try the stunt again. 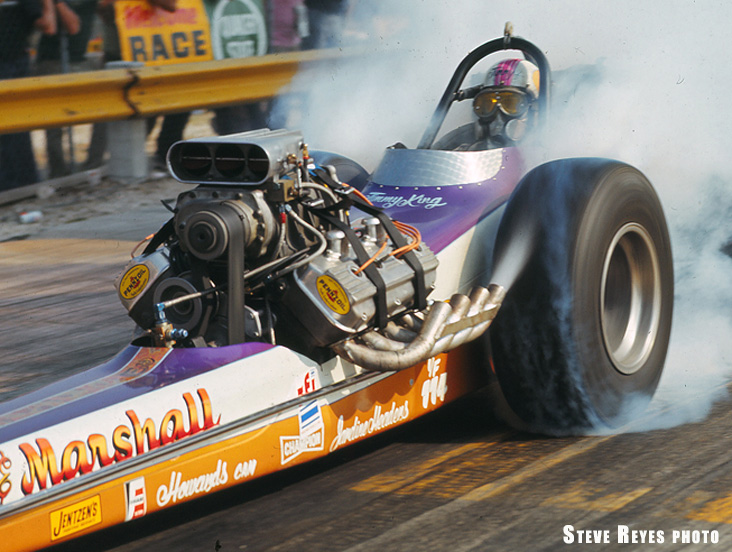 The following March found the King & Marshall team celebrating in the winner’s circle at the Gatornationals where he beat Pennsylvanian racer Sarge Arciero and the Arciero & Careccia entry in the final on a holeshot, 6.90 to 6.80 to become they the first Northeastern car to win a national event Top Fuel title. 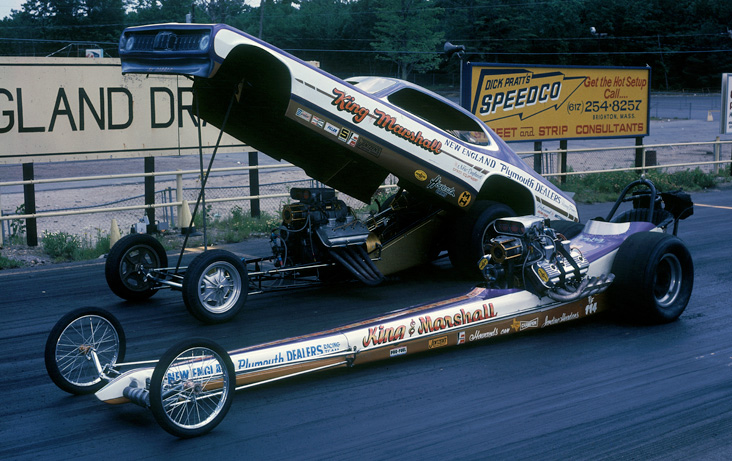 Although the team has raced Top Fuel and Funny Car in 1972, with Don Roberts switching off with King as driver of either the Top Fueler or their New England Plymouth Dealers Barracuda flopper, the team switched exclusively to Funny Car a few years later and continued to enjoy success. A couple of Plymouth Dusters – including a stretched and sectioned one that was not NHRA-legal -– followed, as did a Satellite and a Monza. 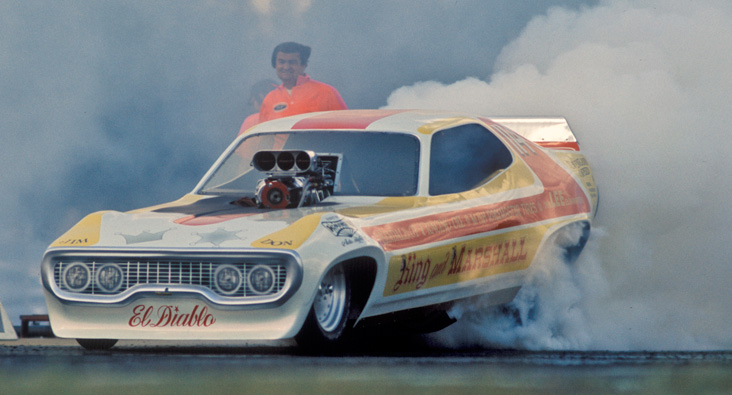 An engine fire that destroyed the car parked the team for a number of years before they returned in Top Fuel with a rear-engined dragster in 1986, an ex-Gary Ormsby car co-owned with Chris and Al Cherry and Frank Colaneri, that ran for a few years before escalating costs forced them out of the show.

King continued to operate his J.K.s Automotive garage in Warren, R.I., for years and got involved in the nostalgia movement after the late after “Sy” Sidebotham restored the front-engined car (complete with rollcage caster) for Ray Helger in 2001 and King provided tuning advice, 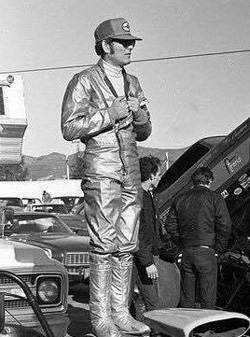 Despite the “Jet Car Bob” nickname, reportedly bestowed upon him by Drag News’ Doris Herbert, Smith was perhaps better known as a gas and fuel dragster driver for teams like Masters and Richter, Sid Waterman, Tom Prufer, the Slippers Car Club, and numerous others.

He briefly drove a fuel dragster for Romeo Palamides before driving Palamides’ “Untouchable” jet dragster from 1962-64 during which time they held a spot for 13 years in the Guinness Book of World Records for top speed with a blast of 287.704 mph at Kingdon Dragstrip on Jan.13, 1963 and held the Drag News 1320 Standard Unlimited Dragster Record until the class was abolished.

Smith’s time in the jet cars was not always fun and certainly not untouchable by accidents, as he crashed three times in ’63 and ’64 with the final one so serious that he spent six months in the hospital recovering .

He returned to racing in 1967 with a Top Gas dragster but a top-end engine explosion and fire at the AHRA World Championships in Green Valley, Texas in Sept.1968 left him with life-threatening burns. 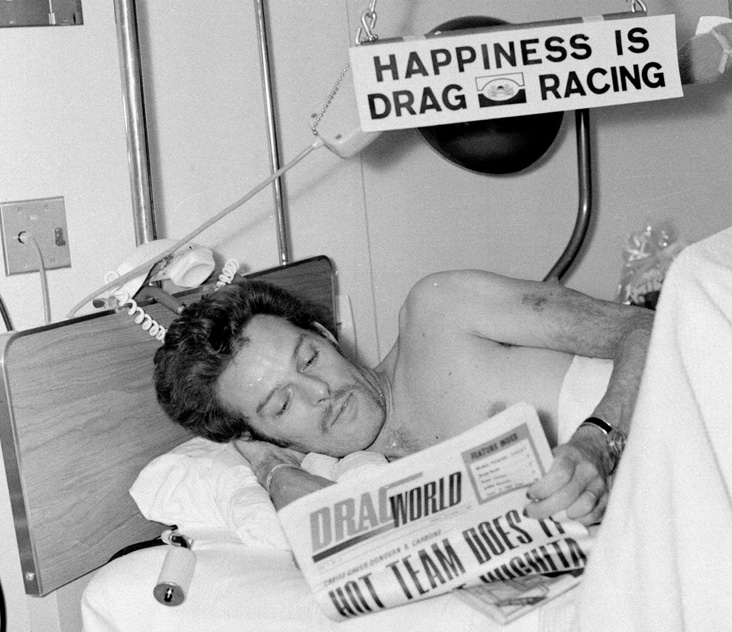 After another long hospital stay and recovery period, as pictured above in Steve Reyes' classic photo, Smith finished his racing career at the wheel of the Aumack Brothers’ “Mustard Gasser” Top Gas dragster.

Farewell, Jimmy King and “Jet Car Bob.” Thanks for the memories. You’ll be missed.