The 1991 season was one of the wildest in NHRA history, with broken barriers, a nitro-shortage scare, wild crashes, overdue wins, rookie phenoms, and much more, and we've got the trivia quiz to prove it.
19 May 2017
Phil Burgess, NHRA National Dragster Editor
DRAGSTER Insider

I had a lot of fun researching and reminiscing while creating last week’s column about Pat Austin’s double at the 1991 Topeka event, but, typical me, leafing through those old issues of National Dragster got my gears spinning.

Going through the issues, I was struck by how many big news stories occurred in that year. It was, of course, 26 years ago, but I still found myself going “Oh yeah, I remember that” or “Wow, I forgot all about that” so I thought we’d play a little game to test your memory, too. These all happened in 1991. See if you can come up with the answers:

OK, before we see how well you did, let’s take a look at some of the year’s other big stories. 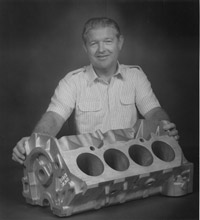 It was a year of painful losses in the drag racing community as some of the sport's early pioneers and most influential people passed away during the course of the year. Engine manufacturer Keith Black, whose blocks dominated nitro racing for decades, succumbed to cancer on May 13 and a few months later, Funny Car owner and engine manufacturer Joe Pisano (whose JP-1 block was also the hot ticket in nitro racing) died of a heart attack at the Mile-High Nationals. We also lost Fuel Altered legend "Wild Willie" Borsch, Top Fuel racer Richard Holcomb, and Gene Beaver, owner of the L.A. Hooker series of Funny Cars and cousin of John Force. 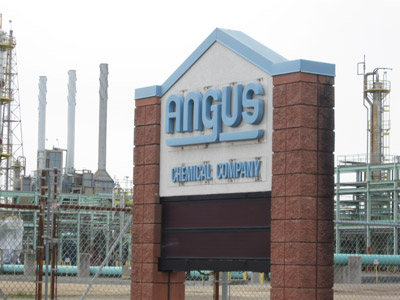 The sport was rocked – literally – in May when an explosion and fire at the Angus Chemical plant in Sterlington, La., threatened the availability of nitromethane. At the time, the plant accounted for approximately 75 percent of all nitro fuel used by drag racers and Angus management estimated the plant would be down until the end of the year and supplies would be dramatically affected. The price of a 53-galIon drum of nitro jumped almost overnight from $950 to $1,500. NHRA considered many workarounds, including restricting Top Fuel and Funny Cars to 50-percent loads and reducing the number of qualifying sessions. Fortunately, none of that needed to be implemented. Frank LeSeuer of World Wide Racing Fuels located an alternative source for nitro in China that was tested and seemed to create no problems and helped fill the gap until the Angus plant was up and running early in 1992.

The sport was rocked yet again when then-reigning Pro Stock world champ Darrell Alderman ran into serious legal woes. I won’t go into details here (you can Google it), but he nonetheless won the 1991 championship as well with a season-record 11 wins, then was suspended by NHRA for the 1992 and ‘93 seasons after pleading guilty to the charges. Scott Geoffrion took over for Alderman in ’92. 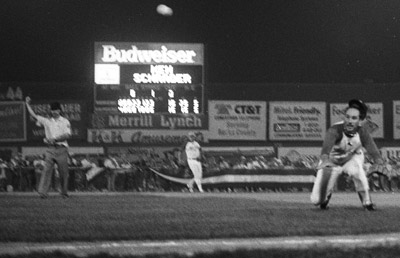 On a much lighter but nonetheless important note, the NHRA community again rallied behind Darrell Gwynn, who was seriously injured in an early-1990 crash by staging a benefit softball game in Reading, Pa., against their NASCAR peers. NHRA won the first time around, 21-20, in 1990, but dropped the rematch, 14-13.

So, as you can see, there was a lot to talk about in 1991, and I probably could have written an entire column on any of the above, but I went the trivia quiz route instead. So, how did you do?

And now, the answers … 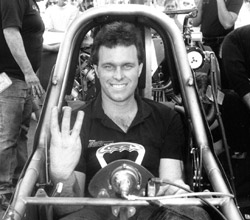 1. Doug Herbert, son of high-performance pioneer Chet Herbert, announced the formation of a Top Fuel team for 1991. Herbert, who had previously competed in the Top Alcohol Dragster class, wouldn’t make it to an NHRA Top Fuel final until early the next season where he was runner-up to Pat Austin’s second double at the Phoenix ’92 event. He also would finish runner-up at Indy that year, and won his first NHRA national event in Columbus in 1993, where he defeated Kenny Bernstein in the final. Herbert would go on to win nine more times in NHRA Top Fuel competition. 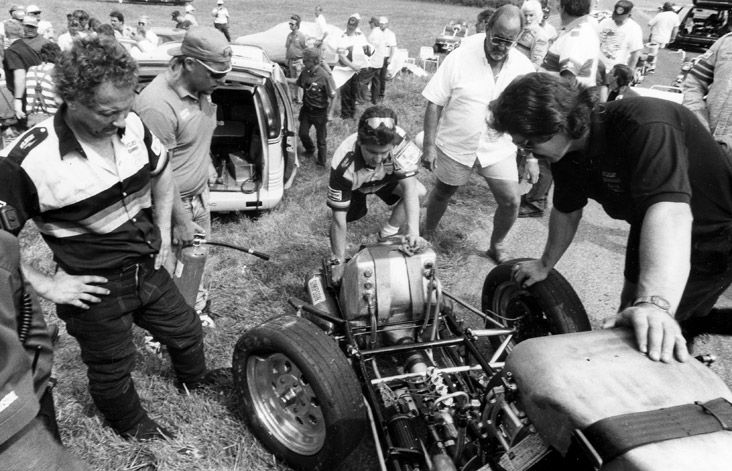 2. "Flash Gordon" Mineo, left, who had been inactive for more than a decade, announced that he had purchased Beadle's complete operation. Like Herbert, success did not come quickly for Mineo, but he did reach two NHRA finals, at Houston in 1992, where he was runner-up to Cruz Pedregon, and in Columbus in 1993, under what has to be one of the craziest circumstance ever. Mineo, who finished a surprising 8th in the ’92 standings, defeated both of the-then most recent Funny Car world champs --- John Force (1990, ’91) in round one and Cruz Pedregon (1992) in the semifinals, bookending a win over ’84 champ Mark Oswald in round two. After beating Pedregon, Mineo's engine returned to life when he rounded the corner in the shutdown area and his car slammed into losing Top Fuel semifinalist Eddie Hill's tow vehicle. No one was seriously injured but Mineo was unable to return for the final, and Gordie Bonin soloed to his first win in more than 12 years, nearly breaking Connie Kalitta's Professional record for most years between wins: 15 (1967 to 1982). 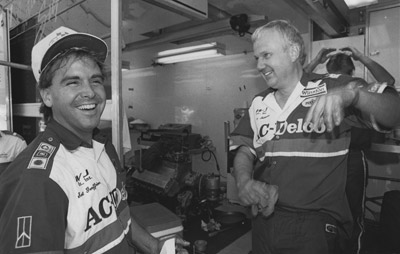 3. Journeyman driver Scott Geoffrion, who had driven a series of part-time Pro Stock entries for guys like Kenny Koretsky, Emil Ekroth and Ron Grose, landed what many considered to be a dream job when he was tabbed to drive Warren Johnson's second Pro Stock Olds.  In 18 events, Geoffrion scored two runner-up finishes (to Darrell Alderman in Houston and to W.J. in Denver), collected two No. 1 qualifying performances and finished fourth in the championship standings. In 1992, Geoffrion was selected to replace Alderman in the Mopar Dodge after Alderman was suspended by the NHRA. 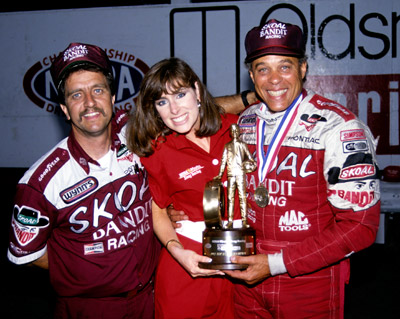 4. Don Prudhomme won his first Top Fuel race in 21 years when he beat Amato at the Springnationals. Prudhomme had last won in Top Fuel in that infamous 1970 Indy final versus Jim Nicoll, the last of five Top Fuel wins to kick off his career. He won his next 35 Wallys in Funny Car between 1973 and 1989, before returning to his dragster roots in 1990. After a trying return season (which included two blowovers), he hired John Medlen away from Kenny Bernstein’s team for the 1991 season and scored four runner-ups – in Pomona, Gainesville, Memphis, and Montreal – before breaking through in Columbus, a win that gave him the points lead, too, ahead of Amato and Bernstein. “I was beginning to wonder if this day was ever going to come,” Prudhomme said. “When you have that long (winless) spell, you start to doubt yourself -- can you do it again? By God, we can do it again. It was really a thrill to go up against Amato in the final. He's a hot dog in Top Fuel, and I was a hot dog in Funny Car. I always said that if I got a chance to drive one of these cars I'd like to race these guys. Well, I got my shot. You know, (Amato) has smoked me off so many times I can't even count 'em. But to smoke him off in the final -- it was cool, I'll take it." 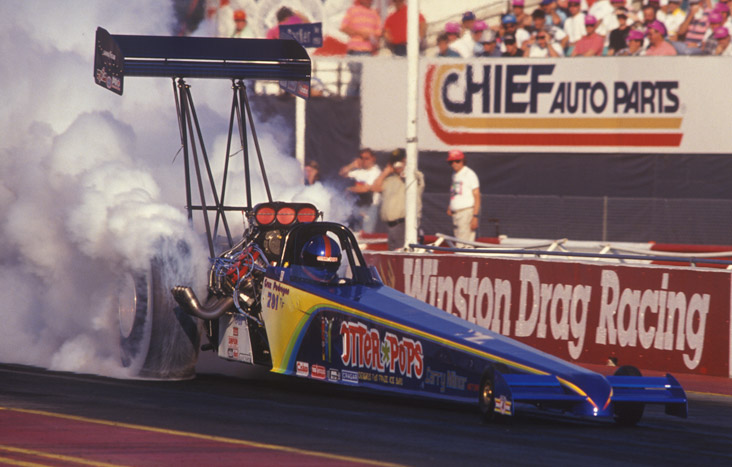 6. Cruz Pedregon made his nitro-racing debut in Pomona, piloting Larry Minor's Otter Pops dragster, though he missed the field. Pedregon also DNQ’d at the next event, in Phoenix, but got in as an alternate for Shirley Muldowney, His first round-win in the class came in Seattle, where he beat Don Prudhomme then Cory McClenathan en route to a semifinal finish. The following year, he drove Minor’s McDonald’s Olds to the Funny Car crown. 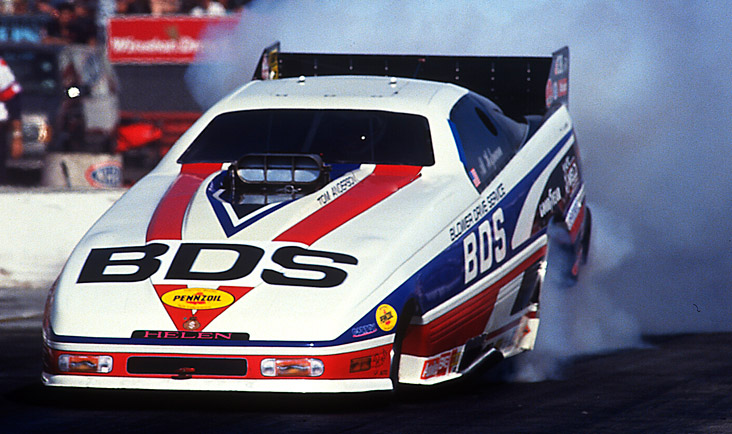 7. After years of struggling as a match racer in Funny Car, Al Hofmann broke through for his first major victory at the non-points-earning Winston Invitational in April. He finished the year with back-to-back national event wins in Dallas and Pomona and ended up seventh in points. He scored 15 career wins and his best finish was a second behind John Force in 1995. 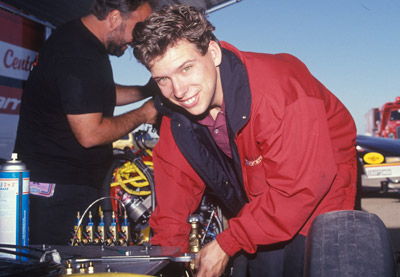 8. Del Worsham was just two months past his 21st birthday when he drove the family Funny Car to victory at the Southern Nationals. (Billy Meyer previously held that record, winning the '77 Fallnationals title at age 22.) At that time, Worsham’s family-operated team was running on financial fumes and preparing to shut down operations after the race and return home looking to save money to, hopefully, return to action that summer. Instead, the 21-year-old went on to defeat Mark Oswald  in the final to become the youngest winner in Funny Car history and Worsham would go onto to score a second win (in Englishtown, again over Oswald in the final) and was named Rookie of the Year. 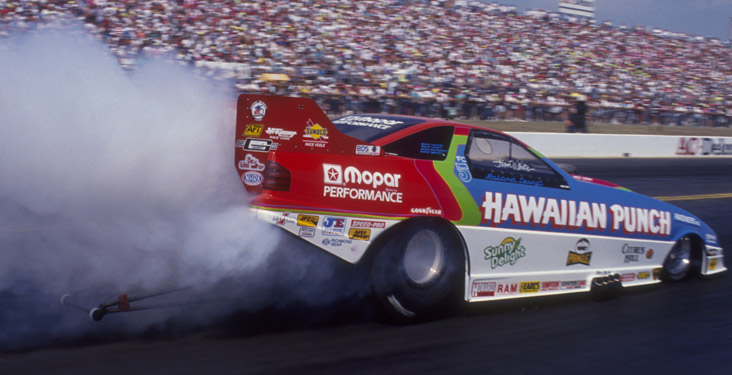 9. Jim White drove Roland Leong’s Wes Cerny-tuned Hawaiian Punch Dodge to the first 290-mph Funny Car clocking at the Dallas event in late 1991. After experimenting with fuel delivery, clutch, and camshafts for nearly two years, and with the addition of a set of cylinder heads from Leonard Hughes, the team closed in on the 290 mark with runs of 288.18 and 288.27 mph in winning the Budweiser Big Bud Shootout and the U.S. Nationals titles, then ran 289.94 mph en route to winning the next race, the Keystone Nationals. They finally topped 290 at Texas Motorplex, with a run of 290.13 and closed the year with a blast of 291.82 mph at the Winston Finals.

10. After the Winston Finals in Pomona was delayed a week by rain, Warren Johnson, who was already locked into second place in the Pro Stock points battle behind Darrell Alderman, decided to fly to Japan to participate in NHRA's previously scheduled inaugural USA Drag Festival at Fuji Speedway rather than return to Pomona. Don Beverley took over the driver's seat of Johnson's Olds in Pomona.