The NHRA Northwest Nationals take center stage on the NHRA Mello Yello tour in early August. Its venue, Pacific Raceways, has been a hotbed of nitro racing since the 1970s, Here's a look back at some great photos and memories from that era.
30 Jun 2017
Phil Burgess, NHRA National Dragster Editor
DRAGSTER Insider

Well, we made it through the "Eastern Swing," four back-to-back-to-back-to-back weekends of grueling racing and traveling in equally grueling weather. After the upcoming Chicago event, its right back into another stretch, the fabled Western Swing through Colorado, California, and Washington state. Earlier this year I published the first of what will be three columns written for you by longtime Northwest drag racing shooter Herman Marchetti showcasing action from Seattle Int’l Raceway (now Pacific Raceways) back in the track’s nitro-racing heyday of the 1970s.

So with the Seattle event not that far off I figured I'd better publish another one. Here’s Part 2, a couple of vignettes about the people who helped make the place special, and some great old shots.

64 Funny Cars!: It's 6 p.m. Friday night the day before 64 Funny Cars. Already in line to get in tomorrow, and it isn't even dark yet. The ticket booths are about half to three-quarter-mile from the highway, six lanes wide. 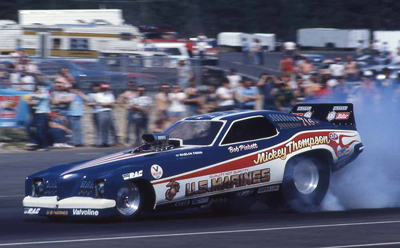 We are in the first 100 cars at the booths. Beer was flowing, parties are already started, it is Friday after all. About 10 p.m. cars approach the ticket booths and they open the gates. Didn't know it at the time but traffic had backed up all the way onto the highway and the State Patrol finally got them to open the gates.

Pulled in with my friend's dad's 1953 GMC dump truck with plywood sides for a dump bed, two kegs of beer, and backed into position just short of the finish line. Set up two layers of construction scaffolding in the dump bed, grabbed my sleeping bag and camped out under the grandstands. No way to get sleep anywhere on the property, the party had started early! Finally said to heck with it after a guy in a single-engine Beechcraft did a high-speed, low-level flyby of the track around 3 a.m.

Practice started at 10 a.m., Funny Cars all day, last race about 1a.m. Because we were on the far side of the track from the entrance, it would take two to three hours to get to the highway. A footnote: We had to leave early evening Saturday to pick up another keg. Luckily I never had to go. 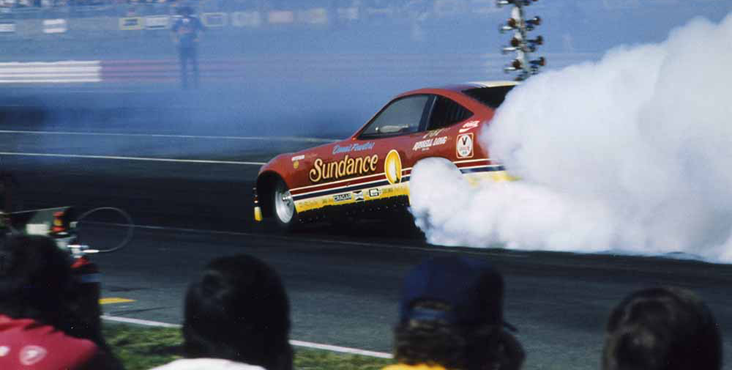 Thanks, Russ: In 1974 my brother's wife's brother, Russell Stevenson, called me and asked me to send a photo of myself to him. Why? Can't tell ya. A week later a letter arrived from Seattle International Raceway. Ripped that thing open and inside was a Gold Card with my name and photo on it, free admission to all events. When I showed up for the first event I tracked Russell down to thank him, he says “No problem and here, keep this and stay away from Doner.” What he gave me was a Photo Press Pass to International Raceway Parks. Still have the pass. Russell did everything at the track including holding up a 3-foot-by-3-foot hunk of plywood at the Tree early in the evening of 64 Funny Cars so the drivers could see the Christmas Tree  lights. The track runs to the west so you race into the setting sun. No ear plugs, no safety glasses. Seen cars do bad things to Christmas Trees, but he was never injured. He was getting a little worn out from holding that hunk of plywood up and I caught him taking a break as “Jungle Jim” backs up. Best shot I ever got of J.J. He was always in the far lane and all the drivers he raced would do their burnouts first so I never got a clear image of "Jungle Jim."

One thing we had going for us in the Northwest was we had 13 Top Fuel or Funny Cars based in the Seattle area. The other was Bill Doner. He knew how to pack them in. Estimates ranged from 15,000-20,000 people would be at 64 Funny Cars. In 1974 alone there were 14 nitro race dates between the end of April to the beginning of September. It was like “the Snake” and “Mongoose” lived here. How could they be racing in California, according to the magazines, when they were always Here? It was the best of times.

‘240 Gordie’: I finally met “240 Gordie” Bonin in 2000 at Spokane Raceway Park. He had just won the FIA European Top Fuel World Championships in 1999. I was working at the racetrack doing all those things that needed to be done, like kicking rocks off the starting line, and sweeping the oil dry from the tailgate of a pickup truck. A couple years later Gordie move to Deer Park, just north of Spokane. We invited him to car-guy breakfast on Saturday mornings and he would hold court with his tales. Showed up at my house one day with a friend on his Kawasaki 900 that he had won at the Gatornationals in ‘79. I can't remember which. Story telling was part of Gordie. Too bad I can't tell most of them here, to protect the innocent and the guilty. There was one story that impressed me the most, and it goes like this:

“We were running at Mission Raceway in B.C. and had a new body on the car. It was dark and we were racing Jerry ‘The King’ Ruth. At the top end, the engine let go in a huge fireball. I grabbed the ‘chutes, shut off the fuel, killed the mag, but the flames were just getting bigger. When I finally got it stopped, I could not get out the window. It was getting real warm when I looked up and saw ‘The King’ had lifted the body up and I was able to escape. He looked like God standing there beckoning me to get outta there. A lot of people disliked Jerry Ruth for whatever reasons, but from that day forward I never had a single bad thing to say about him. He had saved my ass and anyone who crossed ‘The King’ while I was around, I would set them straight.”

We became good friends and it was a chilling day when the news of his passing arrived. I still have an original Firebird autographed t-shirt in my collection.

Man, some great photos there. Thanks again to Herman for sharing them and his wonderful memories. I'll have Part 3 in a few weeks as the Seattle event approaches.