Every new club needs a first member, and Ken Howell was just a teenager in Southern California in 1951 when he became NHRA's first official member. More than 60 years later, we found him at the recent Chevrolet Performance U.S. Nationals. Or, more precisely, he found us.
21 Sep 2017
Phil Burgess, NHRA National Dragster Editor
DRAGSTER Insider 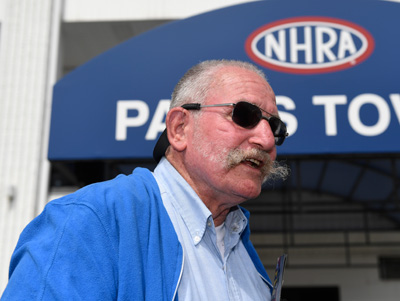 Every new club needs a first member, and when the Wally Parks-led Hot Rod magazine issued the clarion call in its March 1951 issue for new members to create a national association of hot rodders, it was a pair of Southern California twin teenage boys, Ken and Kit Williams, who first answered the call and became the National Hot Rod Association’s first two official members.

Their names were burned into my brain because I spent a lot of time on the internet in 2000 trying to track them down in advance of our 50th anniversary celebration the next year but couldn’t find either of them (do you have any idea how many people named Ken Williams are out there?)

So, it was very much a shock when, in the middle of Indy qualifying on Friday I got word that “NHRA Member No. 1” was at the track. In a serendipitous sequence of events, a shuttle driver who otherwise could have dismissed the claims of this elderly fan, took down the information that eventually ended up with Division 2 Director Rich Schaefer. Rich passed on the info to Jessica Hatcher, our new Director of Communications, who came to me. I was skeptical to say the least; “Unless his name is Ken or Kit, it’s not him,” I told her. Sure enough, it was Ken. 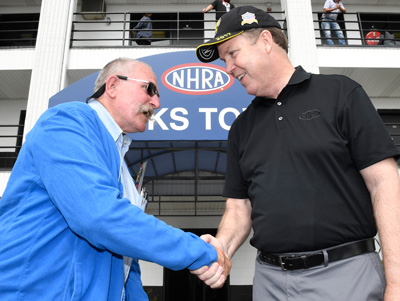 Ken, who has remained a drag racing fan since those early days, had taken on his stepfather’s last name, Howell, in 1956, and his brother, Kit, had passed away in 1991, which probably goes a long way to explaining why I couldn’t find either of them back in 2000.

Once word got around, he got the VIP treatment. NHRA President Peter Clifford and a number of other high-ranking NHRA executives clamored to meet him. We got him set up with suite passes for the tower and he was introduced on stage during Monday’s pre-race ceremony, where he was met by an unexpectedly loud and lengthy ovation. I spent some time with him at the event, then followed up with a phone call the week after to learn more of his story. As long as I’ve been with National Dragster, our readers weren’t merely subscribers but members as well, so to get the chance to talk with the guy who started the roll call was very special to me. 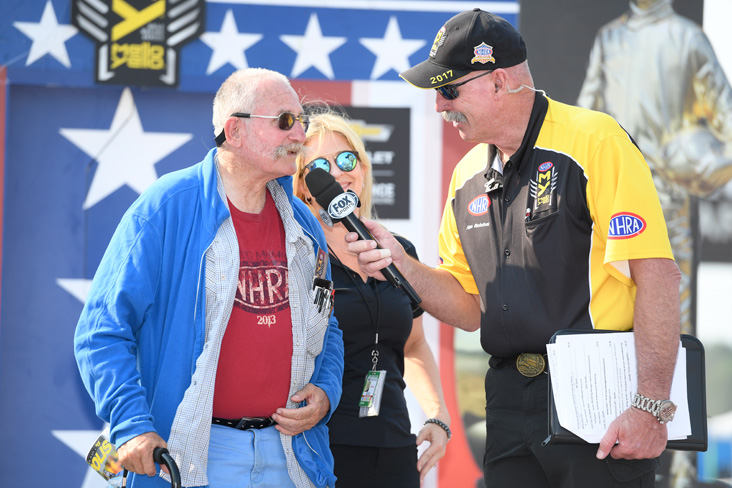 The Williams brothers were just 13 when they read the story in Hot Rod (actually, it was a planted “letter to the editor,” ghostwritten by Hot Rod staffer Lee O. Ryan under the pseudonym “Bob Cameron Jr.” to further Parks’ ambitious goals). They were your typical car-crazy SoCal teens, who grew up in Whittier, Calif., which was home to Evans cylinder heads, Ak Miller’s shop, and packed with hot rodders. A year ahead of them at Audubon Jr. High School was Vic Edelbrock Jr.

“People bragged about his athletic prowess, but we were more impressed on what he was doing in metal shop,” remembers Howell of Edelbrock. “Even then we were trying to figure out a way to get a car -- we already had been reading Hot Rod for three years -- but when we read [about the forming of NHRA], we wanted to be in on the ground floor.”

Ken sold newspapers on the street corner -- two regular customers were Bob and Dick Pierson, whose flathead-powered ‘34 Ford coupe was the terror of El Mirage in the day -- and Kit got extra money by volunteering to clean classrooms after school. They each got together the $2 membership fee and stuck their hard-earned greenbacks into an envelope addressed to the magazine’s home on La Cienega Blvd., in Los Angeles.

The challenge of sorting through and organizing the hundreds of applications fell to Hot Rod magazine's editorial secretary, Barbara Livingston, who 11 years later would become Parks' wife until her passing in early 2006. It was by her hand that the Williams brothers went into the history books.

"We didn't know how many applications to expect, but the letters started pouring in, hundreds of them," she once told me. "We were so busy with the magazine that I took the letters home with me, and at night I opened them, and began assigning numbers. The first one opened would be number one and so on. I sorted them by state and city and alphabetized them, then typed up membership cards and mailed them with a welcome letter, a membership decal, and a member's manual, and it grew from there." 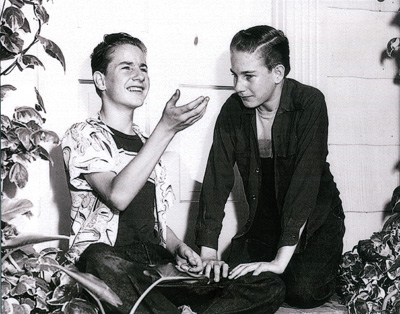 In the June 1951 issue, the Hot Rod staff published a list of the first 50 members, including the Williams brothers along with this photo. Parks had dispatched a Hot Rod photographer to Arcadia, Calif., where the brothers were now living with a cousin, and, as the legend goes, they flipped a coin to decide which was Member No. 1. Ken doesn’t recall it going down that way, remembering instead that it was done alphabetically, with Ken preceding Kit, a real bummer for Kit whose real name was actually Keith. Either way, Ken, pictured left, ended up No. 1.

Their stepfather bought them a ’48 Ford, powered by a flathead with a Chandler Grove carburetor. With the skills learned in Hot Rod, they rebuilt the engine and, in a tribute to their old classmate, added Edelbrock heads. Ken remembers going to Pomona in the mid-1950s to watch heroes like Art Chrisman race, and even raced at the old San Gabriel dragstrip in the late 1950s.

The boys remained members through high school but as college took away their time –- and money –- they had to let their memberships lapse, but Ken never lost the drag racing bug. 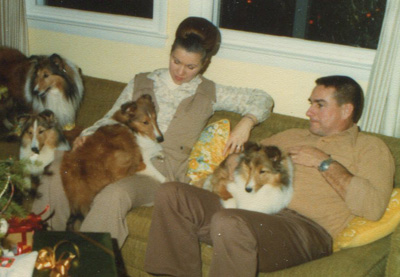 Kit's hot-rod infatuation ended after high school and was replaced by his love of animals. He went to veterinary school at the University of California-Davis on the Monterey Peninsula in Northern California, became a veterinarian, and opened a veterinary hospital in Carmel, Calif., with his wife, Carol, whom he met at school. Together they later founded Jade Mist Shelties, which became nationally renowned as a breeder and trainer of champion Shetland Sheepdogs. (The Jade Mist came from their time in Monterey, where rains keep the countryside green and a Pacific Ocean fog typically rolled in, hence Jade Mist.) Kit passed away Aug. 19, 1991, at age 53 of Barrett's syndrome (esophageal cancer), just two days after their 25th wedding anniversary, but Carol continues to run the business. That's the happy couple and some of their Shelties at right; thanks to Carol for sending me this photo and the one  of the brothers at the ranch, as well as a slew of others that I have shared with Ken. 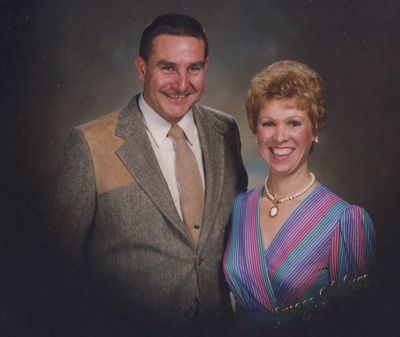 "Keith loved the cattle of his youth, so he decided to be a veterinarian," she told me. "Keith and I ran our own veterinary hospital in Carmel, then sold it when Keith accepted an offer to work with cattle in Maryland.  We embarked on a hobby of showing and raising Shelties when we were first married, and over the years finished many AKC Championships, and owned three of the top sires of all breed history. Keith still had a big desire to own another purebred Horned Hereford, his favorite cattle breed.  I secretly saved money for quite a few years, and surprised him with a trip to an important auction in California, where he bought his first Hereford herd cow, Ms. Dare. A few years after that, he bought another Horned Hereford, at an auction in Oklahoma, and she produced a beautiful calf for him.  He showed her a bit, and the day Keith died, a friend took the cow and her baby to a county fair in Maryland for Keith, where they won Best Cow/Calf in show. A culmination of his dream!"

After serving in the army and completing college, Ken moved to Phoenix, where he raced his nearly unbeatable Corvair at Beeline Dragway and also at the Phoenix Int’l Raceway circle track. He moved to Boise, Idaho, and later to Medford, Ore., and spent time at both Firebird Raceway and Jackson County Sports Park, respectively, in those towns, and met NHRA stars like Gary and Joanne Densham, Cristen Powell, and Doug Herbert.

On numerous occasions, Ken, who, like his brother, showed dogs in addition to his primary vocation as an accountant, returned to Southern California where he became a regular attendee at the Winternationals and World Finals. Most times he couldn’t afford to attend all days, preferring to watch qualifying in person and follow Sunday’s finals on TV.

Until this year’s U.S. Nationals, his last NHRA event was the 2008 Winternationals. Later that summer, he was hit by a car and returned to Boise to be near his sister, Judy, and her family and the local VA hospital. He still lives there. He’ll turn 80 in November.

He never knew we were looking for him, but he’s glad we found one another.

“I had told some people in phone calls that I was the first member and even wrote it when I renewed my membership but nothing ever came of it,” he remembers. “I didn’t think anyone cared.”

We did, and it showed at Indy.

“I was overwhelmed,” he told me. “They treated me like a king.”

It was great to meet him and to get some first-hand remembrances of those early days of the institution that means so much to me. I'm sure that Wally and Barbara would be thrilled that we were finally able to find him.