A decade ago, the 2007 Auto Club Finals was a true barnburner and crowned four champions on the final day of the season with the average winning points margin of less than a round's worth of racing.
10 Nov 2017
Phil Burgess, NHRA National Dragster Editor
DRAGSTER Insider

When it comes to the Auto Club NHRA Finals, it’s easy for people to remember the bigger moments in championship drama. A lot of people will invoke the 1990 Top Fuel final, a winner-take-all battle between Joe Amato and Gary Ormsby decided on G.O.’s foul start or the stupefying Alan Johnson/Tony Schumacher collaboration known simply as “The Run” that won them the 2006 Top Fuel crown with a pinpoint winning run quick enough to set the national record but not too quick as to outpace their earlier backup effort.

A lot of people, however, seem to forget what happened exactly a decade ago at the 2007 event, where all four championships not only went to the final event of the season but also to the last day. Every Mello Yello championship is still mathematically up for grabs at the season finale this weekend in Pomona, certainly not the first time or last time it’s happened (it happened as recently as three seasons ago, too), but 2007 was a true barnburner.

The 2007 season was the first year of the Countdown to the Championship, and all of the drama that we had hoped for came to pass as the season whittled down to the end. The title races in Top Fuel and Pro Stock Motorcycle went down to their respective final rounds and the Funny Car and Pro Stock championships were decided in the semifinals and quarterfinals, respectively, and in dramatic fashion of their own. As testament to their skills, three of the four newly crowned champions also hoisted an event Wally alongside their championship trophy, and low e.t. of the meet in all four classes was set by the winner in the final round.

Against all odds, Schumacher was at it again, making something from next to nothing. He entered the event in fourth place but finished on top. As had been the fate of Doug Kalitta the year before, points leader Rod Fuller was relegated to watching from the sidelines as Schumacher began to resurrect his title defense.

Fuller had needed just to win the first round but he was upset by Bob Vandergriff Jr. in the initial stanza, leaving the door open for Larry Dixon, Brandon Bernstein, and, to a less degree, Schumacher.

As Fuller watched nervously, the dominoes began to fall. Second-place Dixon fell in round two to J.R. Todd, handing the reins to Bernstein, who needed only to beat Schumacher in the semifinals to join his father Kenny as an NHRA Professional champion. Schumacher kept Fuller’s dreams alive for one more round with a 4.52 triumph over Bernstein, then, as he did a year before, dashed them in the gathering darkness with low e.t of the meet, a 4.486, to beat Vandergriff's UPS Store dragster and seal his record fourth straight Top Fuel crown.

Andrew Hines had a chance to make history in Pro Stock Motorcycle, and the three-time reigning champ seemed perfectly poised to become the first rider to win four straight until he staged his points-leading Harley too shallow in the second round and red-lighted.

Matt Smith and Chip Ellis both began a Schumacherian long climb to reach the final round that either of them needed to surpass Hines, and in improbable fashion, both did, eliminating Hines from contention and setting up a one-race, winner-take-all final, only the second in NHRA history behind the Amato-Ormsby bout 17 years previous. 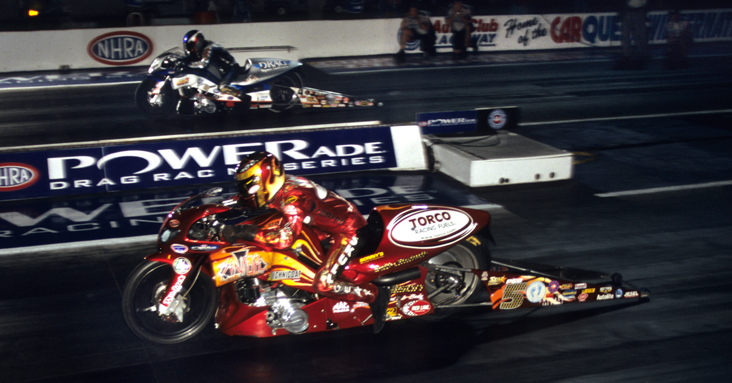 Smith, whose Torco Buell had been the best bike all year, was better when it counted here, too, racing off to a 6.94 to 6.95 victory to earn the second-generation racer his first championship, finishing just six points ahead of Hines. Ellis finished third, one point behind Hines. Three riders within seven points; that’s pretty astounding.

Jeg Coughlin reminded people what they may have forgotten during his 2005 absence from the Pro Stock class: There’s no one better in the clutch than the second-generation Ohio pilot. What was expected to be a drawn-out day of points watching between Coughlin, frontrunner Greg Anderson, and red-hot-but-cooling Dave Connolly in what was the tightest of the four points battles took a crazy twist in round one when first Connolly red-lighted to Mike Edwards — just his second foul of the season — then Anderson was late and lost to Justin Humphreys. Coughlin defeated Larry Morgan in his opening-round tilt, and just like that, his second-round bash with Richie Stevens Jr. became the deciding match of the season.

Coughlin left little doubt, Treeing Stevens, .015 to .080, and ripping to low e.t. of the meet to that point, a 6.646, to collect his third Pro Stock and fourth overall NHRA championship. Coughlin wasn’t done, however, as he defeated the two guys who helped him win the title, Edwards and Humphreys, in the final two rounds, the latter with low e.t. of the meet 6.638.

Unlike his three newly-crowned fellow champs, Tony Pedregon didn’t also win the event – that honor went to his former John Force Racing teammate Robert Hight – but it was a satisfying second season title for Pedregon, and his first as a team owner after having previously won it with JFR in 2003.

Up until the semifinals, Hight actually had a chance to catch Pedregon, who had barely qualified for the field and was defeated in round one. Pedregon’s early exit set Hight up for a chance to accomplish the Funny Car version of “The Run,” needing an event victory and a national record to move past Pedregon by a single point. And although he defeated Mike Ashley in the semifinals, Hight needed to do so with at least a 4.705 to get a backup for a potential record-setting final-round dash but fell well short with a 4.87 to earn Pedregon the title.

Still, Hight put the capper on a roller-coaster season for John Force Racing -– one in which they devastatingly lost rising star Eric Medlen in a March testing incident and almost their patriarch in his October crash at Texas Motorplex –- by winning the race, defeating fill-in driver Phil Burkart Jr., subbing for Force, in the final.

With a battered and bandaged Force watching from the sidelines, Hight made a statement to end the season, running a 4.731, low e.t. for the weekend, to collect the win. Hight fell just 19 points shy of catching Pedregon.

So, to recap: Schumacher claimed the Top Fuel title by 21 points, Pedregon the Funny Car crown by 19, Coughlin the Pro Stock championship by four tallies, and Smith the Pro Stock Motorcycle hardware by just six markers. Average margin of victory: 12.5 points, or less than a round. That’s some kind of finale!

There have been closer finishes -– in 2009, Schumacher edged Larry Dixon in Top Fuel and Hector Arana Sr. nosed out Eddie Krawiec, both by just two points, the same margin by which Jack Beckman held off Ron Capps in 2012, and just last year Jason Line eked out the title over teammate Greg Anderson by just three points -– but the 2007 Finals was an across-the-board thriller.