As we wind down this 50 Years of Funny Car celebration, with Ron Capps – a huge fan of the history of our sport -- finally and fittingly crowned the champion, I took a look back over the list of champions who had preceded him and whose company he now shares for all of history, heroes such as Don Prudhomme, Kenny Bernstein, John Force, and so many others.

Capps’ championship put an end to his often-tortuous wait to wear the crown, and he certainly was the most overdue Funny Car racer to do so, but it’s also easy to look at the list below (a list of amazingly only 20 racers for the 50-year history of the class) and notice missing names: Ed McCulloch, Tom McEwen, Don Schumacher, Billy Meyer, Whit Bazemore, Al Hofmann – guys who, despite their amazing accomplishments and longevity in the class, never got to have the big No. 1 on their car. 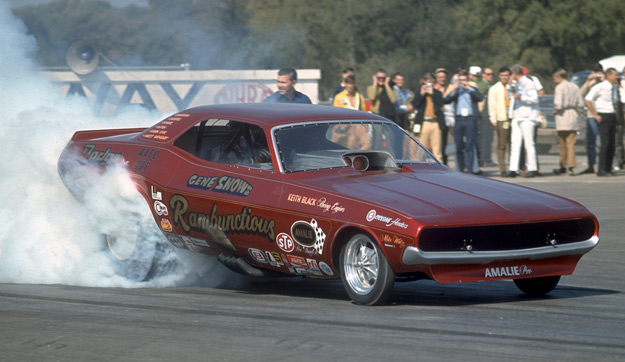 NHRA didn't crown a Funny Car champ until 1970, and through 1973, the champions were crowned on the basis of winning the World Finals, though they all had to qualify, based on points, to compete at the event. Snow might have won the title on a pure points basis anyway as he scored three wins (Summernationals, World Finals, and Supernationals) in the seven-race season to go with runner-ups at the Winternationals and Springnationals. 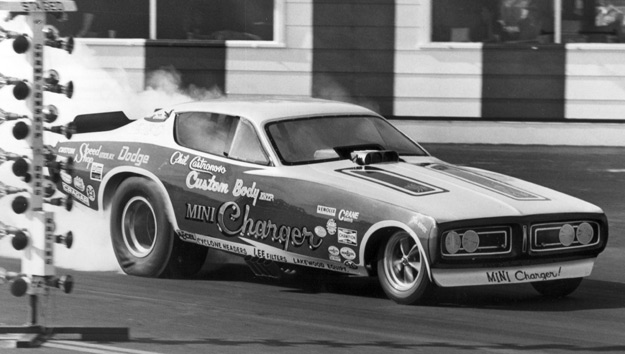 The Castronovo family’s Custom Body Enterprises Dodges were among the East Coast’s toughest in the early 1970s, and Phil earned the 1971 world championship by winning the World Finals in Amarillo, Texas, in the family's mini Charger in what was his first and only final-round appearance. It would be hard to say that his win was not fortuitous because he won the semifinals and final over favorites Leroy Goldstein and Jake Johnston, respectively, when both suffered broken rear ends while leading him. Interestingly, Castronovo didn’t get to wear the No. 1 in 1972 because at the time, NHRA rules awarded the No. 1 to the Top Fuel champ, No. 2 to the Funny Car champ, and No. 3 to the Pro Stock champ. 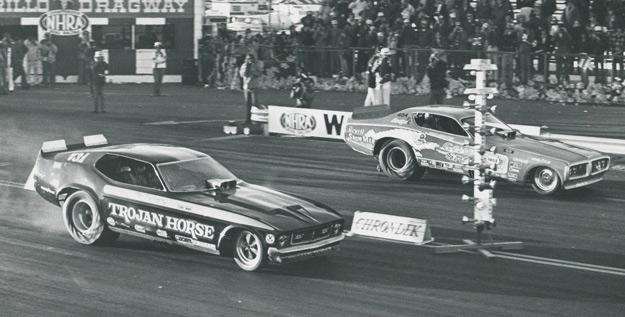 Jake Johnston again was the victim of an upset champion at the World Finals in Amarillo, Texas. After dominating eliminations with a run as quick as 6.51, his Gene Snow-owned Dodge dropped a cylinder and lost in the final to Fullerton’s Trojan Horse Mustang, which to that point had run no quicker than 6.64. Like Castronovo before him, Fullerton made the most of his only NHRA national event final-round appearance.

Driving for Northwest mainstays Jim and Betty Green, future NHRA Division Director Hall won the 1973 world championship in the Jerry Verhuel- and Jim Green-tuned Green Elephant Vega. Hall, the Division 6 champ that season, secured the title with a holeshot victory in the final in Amarillo, Texas, defeating Bobby Rowe and the Mr. Ed Satellite, 6.39 to 6.38.

I tried really hard not to include the almost requisite photo of Greer’s Mustang on fire at the 1974 World Finals at Ontario Motor Speedway, but that’s the story everyone knows. Although Greer also won Le Grandnational earlier in the year, it was his heroic and dramatic comeback after a qualifying fire that badly burned him and his car that will always be the signature moment of his championship year. 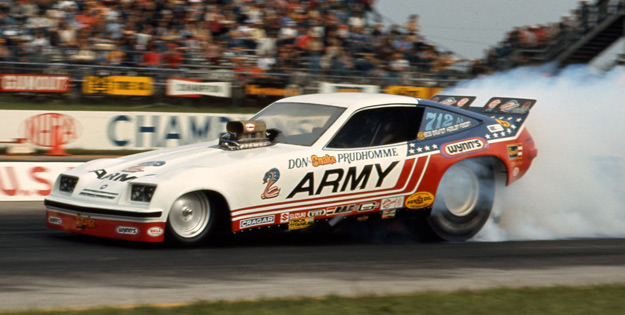 “The Snake” opened an era of multiyear dominance in the class by winning four straight championships in his U.S. Army-affiliated machines, scoring the 1975 and 1976 titles in his Monza and 1977 and 1978 crowns in an Arrow. During that span, Prudhomme won 19 of his 49 national event titles, including seven in an eight-race 1976 campaign.

Beadle and the Blue Max took the class by storm for a three-year run that made him one of the most popular drivers of the era. Although his win totals don’t approach Prudhomme’s – his best season was 1980, when he won three times, and his career win total was just 14 – he did win the U.S. Nationals twice and set a new standard for apparel marketing to fans. 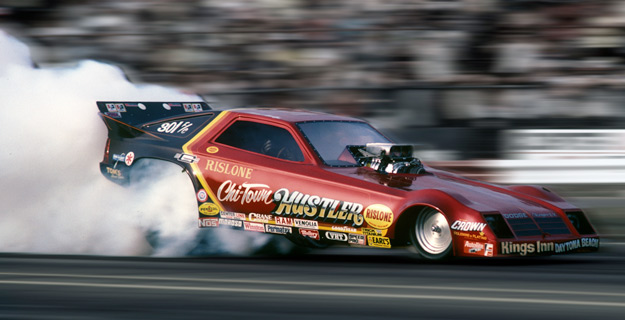 Everyone knew the Chi-Town Hustler name after years of match race barnstorming, but no one took the team seriously when it showed up at the 1982 Winternationals with its million-mile Dodge hauler and relative unknown Canadian Frank Hawley at the wheel. Guided by the sport’s until-then best-kept secret, tuner Austin Coil, the team won four times that year en route to upsetting the apple cart and three times the next season for back-to-back championships.

After finishing second in Top Fuel in 1982, the vaunted Candies & Hughes team returned to its 1960s Funny Car roots but brought along its second-year dragster driver Mark Oswald, who finished second in his first year in Funny Car in 1983 and won the championship the following year in the team’s Old Milwaukee beer-sponsored Trans Am. Oswald, of course, is now the world championship tuner for Antron Brown's Top Fueler.

The Budweiser King ascended the Funny Car throne for the first of four straight years with a high-tech Ford Tempo that brought the class into a new era of aerodynamics. Tuned and masterminded by Dale Armstrong, the Budweiser King Ford and Buicks moved the class’ evolution forward with innovations such as the lockup clutch, advanced fuel-system controls, and data recorders. In his four-year reign, Bernstein won an amazing 21 events. 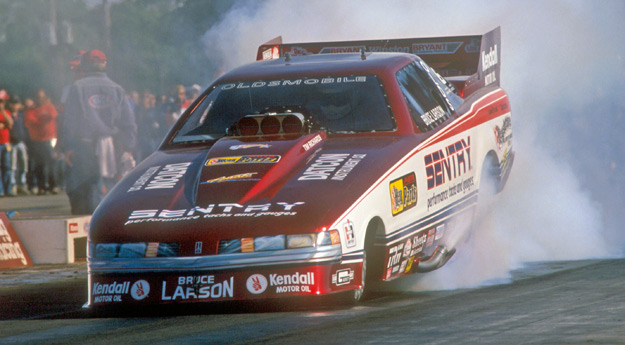 Kenny Bernstein’s reign was ended by what many would consider an unlikely hero in Larson, who had been competing in the class since its earliest years but had never seriously challenged for a championship. With Maynard Yingst calling the tuning shots and backing from Sentry Tachs & Gauges, the Pennsylvania veteran won six times in 1989, bookended by wins at the season opener and season finale in Pomona. 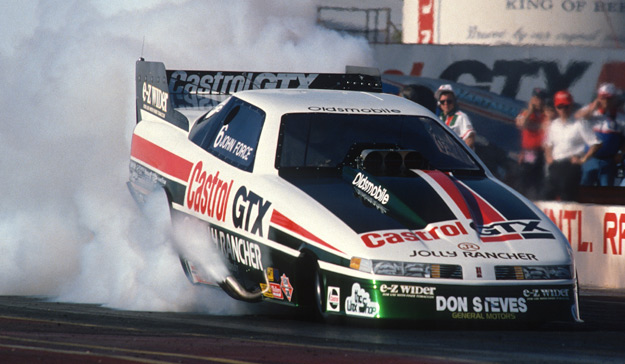 Entering the 1990 season, Force and crew chief Austin Coil had just five victories in the previous three seasons as they learned to work and grow together. In 1990, they won seven times and eked out the championship ahead of Ed McCulloch by less than three rounds of racing. Force and Coil dominated the next decade with their Castrol GTX-backed machines, racking up even more championships and race wins. Today, Force is far and away the winningest driver in any class, with 147 victories and 16 championships. 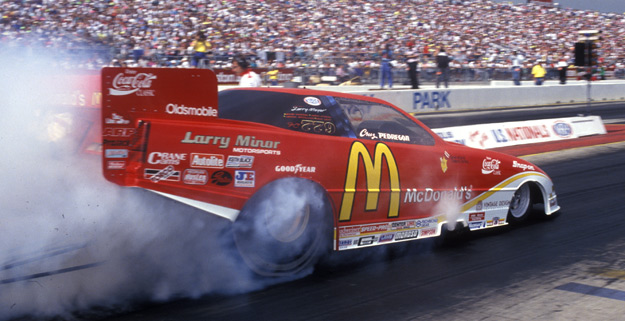 Just when John Force thought that he might ride the wave forever after back-to-back titles in 1990 and 1991, Pedregon broke up what would have been a decade-long domination by edging him for the crown in 1992. At the wheel of the Larry Minor-owned McDonald’s Olds, Pedregon won six times – including in Indy – to outlast Force, who crashed at the season’s final two events in his frenzied bid to maintain his crown. Sixteen years later, Pedregon became just the sixth driver to win more than one championship, as a team owner of his Advance Auto Parts Toyota. 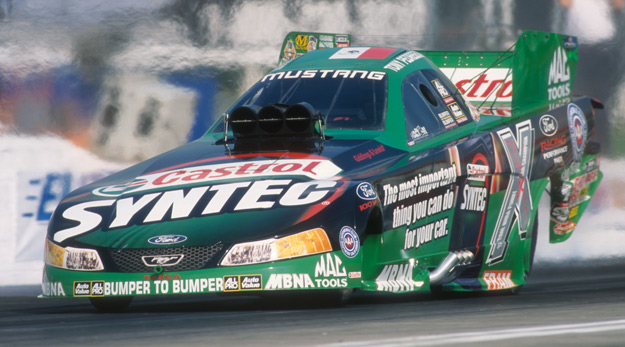 Cruz Pedregon’s younger brother, Tony, joined him as a Funny Car world champ in 2003 while driving a second Castrol team car for his brother’s nemesis, John Force. Like his big brother, Tony added a second title of his own as a car owner four years later with his Dickie Venables-tuned Quaker State Chevy. Before he retired to become NHRA’s television analyst, Pedregon had accumulated 43 wins. At the time, he was second only to Force but has since slipped to third behind Ron Capps as well. 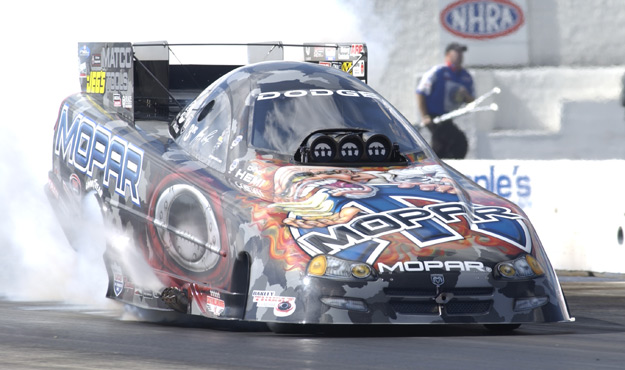 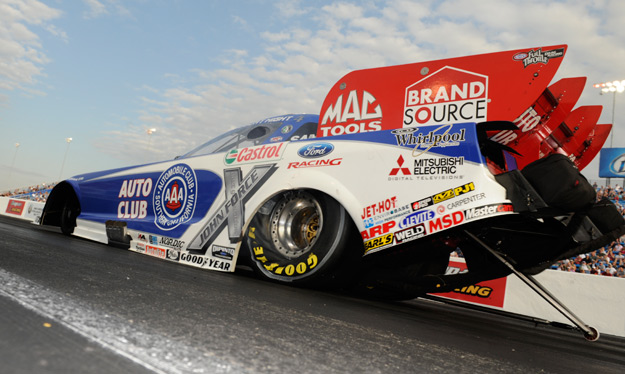 Hight made one of the greatest comebacks of the Countdown to the Championship era. The driver of John Force Racing’s Mike Neff-tuned Auto Club Mustang barely qualified for the postseason playoffs, then won in Charlotte, Dallas, and Las Vegas to move from the No. 10 spot all the way to No. 1 and become the third JFR driver to add to the team’s impressive championship count. 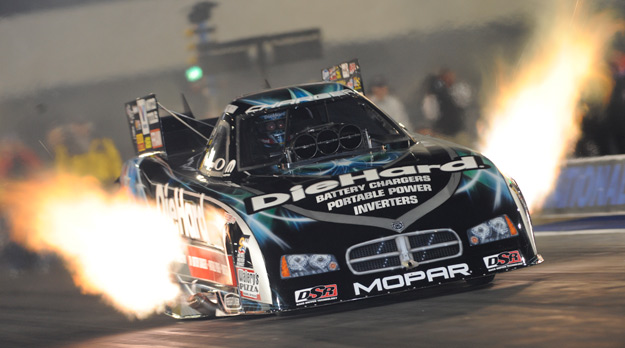 Hagan made his Funny Car debut in 2008, and it didn’t take the Virginia cattle farmer long to make hay in the class, winning the 2011 championship in Don Schumacher’s Tommy DeLago-tuned DieHard Dodge – a season highlighted by him making the class’ first three-second run at the fall Charlotte event – and then returning to the champion’s podium three years later with the Mopar Express Lane Dodge, wrenched by Dickie Venables.

Beckman not only added his name to the list of Funny Car champions but also became the first former Sportsman national champ to do so. Beckman, who won the 2003 Super Comp championship, earned the crown by the narrowest of margins, eking out the title by just two points over teammate Ron Capps.

Worsham became just the third driver to win championships in Top Fuel and Funny Car, joining Kenny Bernstein and Gary Scelzi on the elite list. Worsham, who won the 2011 Top Fuel crown then took a break from driving to tune Alexis DeJoria’s Funny Car in 2012, won four of the six Countdown to the Championship events after entering as the No. 4 seed and held off Jack Beckman by less than three rounds for the title. 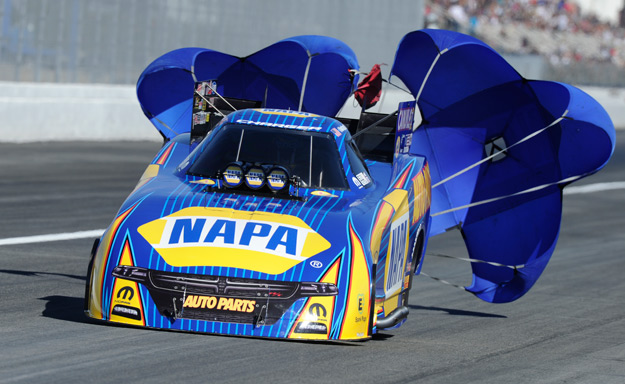 After four second-place finishes (including 2012’s heartbreaker), Capps finally broke through for the title with his Rahn Tobler-tuned NAPA Auto Parts Charger and did so in dominating fashion, with five wins – including his milestone 50th -- and five runner-up finishes. He took over the points lead in Englishtown and never relinquished the top spot for the remainder of the season.

Twenty champions over 50 years doesn’t sound like a lot (even considering that John Force monopolized 16), but it’s clear that the days when a Force or a Prudhomme or a Bernstein could rip off four straight championships are long gone. The class is so tight and so competitive now that there have been five different champs in the last five seasons and eight in the last 10, and there hasn’t been a back-to-back champion since Force in 2001-02. People like to say that the 1970s were the heyday of Funny Car racing, but a lot of people might argue that the competition now is as great as it has ever been.