Due to some unforeseen circumstances and the rapidly approaching Chevrolet Performance U.S. Nationals, the ol’ Insider is going to take a brief hiatus on original material. I don’t want to leave you high and dry, so I’m going to share here some columns I’d written for the National Dragster website some time ago that I still think are relative and entertaining.

The first, from the My Favorite Fuelers column I wrote, takes a look at a guy whose history is certainly entwined with Indy, as he’s one of just a handful of drivers to have won the Big Go in Top Fuel and Funny Car, Ed “the Ace” McCulloch. Enjoy! 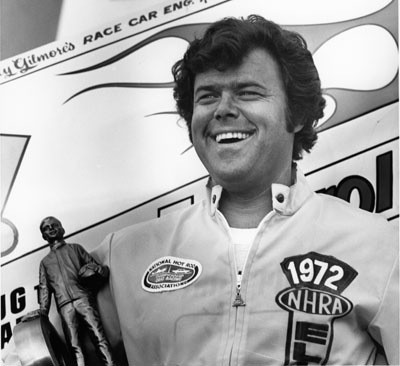 It could easily be said that all Funny Car drivers are tough — it takes a certain amount of moxie and derring-do to drive a short-wheelbased, high-horsepower car at more than 300 mph — but when I think of tough Funny Car drivers, the list kind of begins and ends with Ed McCulloch. Tough with his fists when need be and tougher still behind the wheel, he amassed a Hall of Fame career, both in the cockpit and in the crew chief’s chair that won’t soon be forgotten.

Other than a Fuel Altered, McCulloch did it all in nitro cars, from driving front-engine Top Fuelers to Funny Cars, then back to Top Fuel with rear-engine cars, to Top Fuel crew chief and Funny Car crew chief for legends of the sport like Connie Kalitta and Don Prudhomme.

McCulloch won 22 NHRA national events — 18 in Funny Car and four in Top Fuel — and is one of a short list of drivers to have won NHRA national events in both nitro classes. He scored six victories at the U.S. Nationals, making him part of an even shorter list of those who have won the Big Go in both nitro classes; his five Indy wins in Funny Car are more than any other driver, including Prudhomme and John Force.

Although he’s best known as a Funny Car driver, like a lot of the sport’s great flopper stars, he got his start in Top Fuel in the early 1960s. Here’s a pictorial look at his great career.

After an early partnership with fellow Oregonian Ernie Hall, McCulloch and his brother, Dan, built a Chevy-powered dragster in 1964 that he crashed on its second pass — he struck the then-common centerline concrete blocks that housed the finish-line timing lights and rolled — and vowed never to drive again. He partnered with Jim Albrich on this Chrysler-powered, Kent Fuller-chassised dragster with Dave Jeffers driving, but McCulloch eventually returned to the cockpit of the car, which was dubbed Northwind. They enjoyed a lot of success, capped by their June 1965 defeat of Pete Robinson for the No. 1 spot on the Drag News Mr. Eliminator list.

In 1969, McCulloch partnered with Art Whipple, who had this new big-block Chevy-powered Camaro. McCulloch agreed to shake it down for Whipple, who intended to drive, at a local event, but when McCulloch booted the car to the No. 1 qualifying spot and won the event, he became the driver. “I loved Funny Cars right away,” McCulloch said.

The duo built a new car, a Duster, for 1970, and it was a trick piece for the time, with full side windows, a roof hatch, and a solid-mount rear end with a Crowerglide clutch and Lenco transmission. The car set the national record at 7.19, 211 mph at Orange County Int’l Raceway but unfortunately was lost in a trailer fire on the way to compete at the U.S. Nationals. “We lost everything,” said McCulloch. The team rebuilt in time for that year’s World Finals in Dallas, where McCulloch drove the team’s new Barracuda to the final round, but transmission problems cost him the title against Gene Snow, and he just missed winning the world championship, a prize that would elude him his entire career. McCulloch and Whipple did win the Division 6 championship.

Whipple and McCulloch hit the match-race trail hard in 1971 and, with lessons learned on the road, blitzed their way into the U.S. Nationals, where they qualified No. 2 and defeated Sammy Miller, Jim Dunn, Kalitta, and, in the final, Dale Pulde, for his first NHRA win.

The team landed sponsorship from model maker Revell for the 1972 and unveiled one of his iconic cars, the Revellution Duster, and promptly began kicking ass, winning the first three events — Pomona, Gainesville, and Columbus (plus the prestigious March Meet) — before losing the Englishtown final to Don Schumacher. After winning the U.S. Nationals for the second straight year, McCulloch — again — should have been the world champ, but the title then was still based not on points but on who won the World Finals, and that wasn’t McCulloch — who lost in the semifinals. McCulloch did the season pretty much solo after Whipple left the team following their Pomona win and still finished with a stunning 24-3 round record at national events.

McCulloch’s 1972 Indy win would be his last win anywhere for eight years, though he continued to reach final rounds, including his third straight at the 1973 U.S. Nationals, where he was runner-up to Prudhomme. “The toughest loss I ever had,” McCulloch admits. “I still think about that one a lot; it will probably bother me forever.” He also reached the final round at the 1974 World Finals (runner-up to Dave Condit) and reached three finals in 1976 with the pretty car pictured here, at the Winternationals, FallNationals, and World Finals, all of which resulted in losses to Prudhomme, and was runner-up at the 1978 Summernationals to Denny Savage. With the points system now decided by championships, he finished seventh in 1975, third in 1976, and ninth in 1978.

The combination of a victory drought and exhausting match-race tour caught up with McCulloch in 1979, and he sold his operation. He didn’t stay idle for long when Ed Pink asked him to drive the Super Shops Arrow in 1980. Being a fly-in driver appealed to him, and it showed, when he won his third U.S. Nationals title that year, capping it with a holeshot over Tom Ridings in the final, 6.27 to 6.24, and finished fifth in points. The Super Shops deal ended at the end of the year, and McCulloch spent 1981, 1982, and 1983 on the sidelines.

McCulloch began a long employ with Southern California farming magnate Larry Minor, who expanded his successful two-car Top Fuel operation (with he and Gary Beck driving) to include this Olds Firenza Funny Car. All of the cars were sponsored by Miller Lite. The team got off to a rough start at that year’s Cajun Nationals, where McCulloch collided at midtrack with John Collins. Both cars were destroyed, but neither driver was injured. McCulloch went winless that year and reached just one final, at Le Grandnational in Montreal, where he lost to Billy Meyer, and also lost the only final he reached in 1985, to Kenny Bernstein in Atlanta. After missing the top 10 in 1984, he finished seventh in 1985. 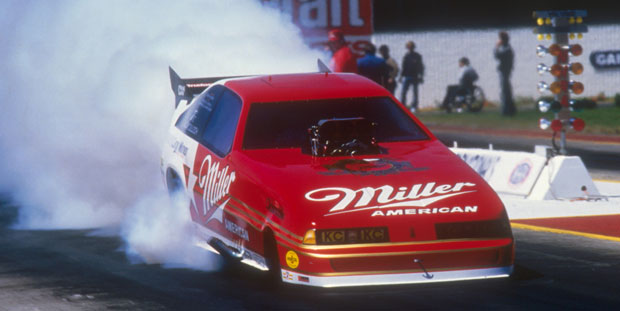 McCulloch won his first national event in six years when he beat Tom McEwen in the final round at the 1986 Gatornationals with the Miller American Olds and then defeated Jim head in a Monday-morning final at the next event, in Atlanta, but he wouldn’t win again that year and finished sixth in points. Wins were still hard to come by and, other than a dominating national-record-setting win in Dallas, 1987 was more frustration — including being in the other lane in Montreal when Force collected his first career win — despite a third-place finish.

McCulloch scored his fourth U.S. Nationals title in 1988, beating Bernstein on a final-round holeshot and also won in Atlanta but still finished just fifth, as he would in 1989. McCulloch won five times in nine finals in 1990 and finished a career-high second behind Force, who won his first championship that season. McCulloch’s 1990 season was highlighted by his category-high fifth Indy win, breaking his tie with then four-time winner Prudhomme. 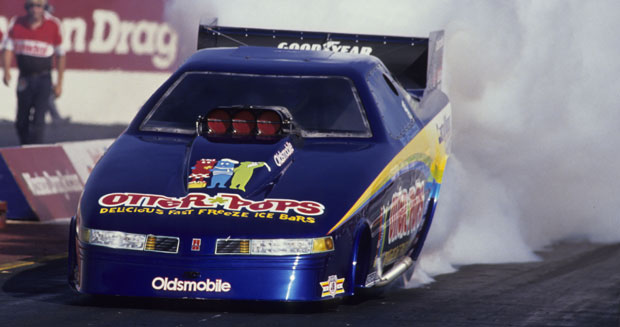 The Miller deal ended in 1990, and McCulloch carried on with Minor in this Olds, sponsored by frozen-confection manufacturer Otter Pops and appeared in four finals en route to his seventh straight top-10 finish (fourth) and his last driving a Funny Car.

When Cruz Pedregon joined the Minor team full time in 1992, he took over the Funny Car, and McCulloch returned to his Top Fuel roots with Minor’s Lee Beard-tuned McDonald’s dragster and scored again at Indy, joining Prudhomme as the only drivers to win the U.S. Nationals in both Top Fuel and Funny Car. “After the first Indy win, that was probably the most gratifying victory of my career. I guess it’s fitting that my first Top Fuel win came at Indy, the same place where I got my first Funny Car win,” said McCulloch, who added wins in Topeka and Dallas en route to a fifth-place finish. McCulloch scored his 22nd and final national event win at the 1993 event in Houston and finished eighth that year, highlighted by a 301.70-mph run in Dallas that made him the 12th member of the Slick 50 300-MPH Club. 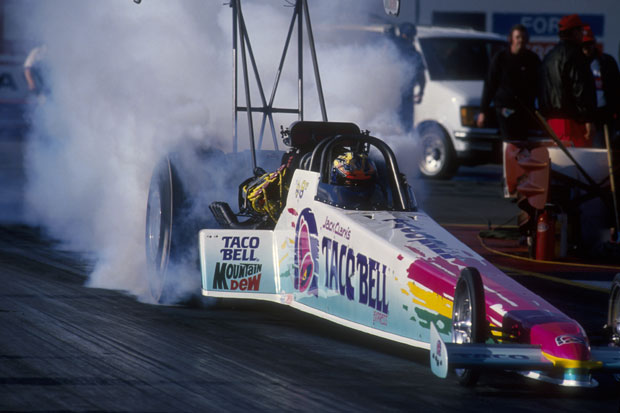 McCulloch briefly drove for former Major League Baseball player Jack Clark in his Taco Bell Express but retired after just a few races. He returned to the cockpit briefly in 1995 as a test driver for Kalitta’s two Top Fuelers, which led to his first crew chief role, initially with Connie and then Doug Kalitta. In 1990, he was hired by Prudhomme to mentor and crew chief for Ron Capps and tuned Capps to six wins in 11 finals and a second-place finish in 2000. McCulloch went on to tune for Doug Herbert and later reunited with Capps in 2005 under the Don Schumacher Racing umbrella, where they won three times in seven finals en route to a second-place finish. McCulloch and Capps formed a potent duo for years, winning 16 races before McCulloch’s dismissal in 2010.