The NHRA Mello Yello Drag Racing Series heads this weekend to Gateway Motorsports Park, almost in the shadow of the famed Gateway Arch that is the symbol of St Louis. Although the racetrack actually is in Madison, Ill., NHRA markets the event — and racers almost exclusively refer to it — as “St. Louis,” so I thought I’d bring back a column I wrote a few years ago for the NHRA National Dragster website, My Favorite Fuelers, which features a double handful of fuel racers from the Show-Me State, Missouri. (This is where you say “OK, show me.”) OK, here you go.

Certainly one of the state’s biggest and most beloved adopted stars was Dickie Harrell, better known as “Mr. Chevrolet” for his dedication to and proficiency with Chevy-powered cars in the 1960s and early 1970s. Born in Phoenix, he moved to New Mexico, where he raced sprint cars and, after a three-year stint in the Army, drag cars — most successful at first in 427 Z-11 Camaros in Super Stock competition — and moved to Kansas City, Mo., in the late 1960s when his career really took off. Even though Chevy had abandoned its factory sponsorships in the mid-1960s, Harrell was Bowtie to the bone and carried on regardless and began building high-performance cars for Chicago dealership Nickey Chevrolet and, later, Yenko Chevrolet in Canonsburg, Pa., and Fred Gibb Chevrolet in LaHarpe, Ill., and he was in on the ground floor of the early Funny Car movement with Chevy II and Camaro entries. He was named AHRA Driver of the Year in 1969 while tuning and driving his fuel Funny Car and was named Driver of the Decade in 1970. Harrell was killed in a racing accident Sept. 12, 1971, in Toronto. 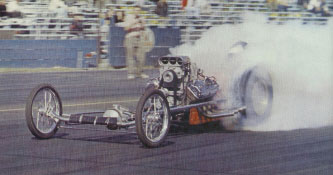 Louis Cangelose was a pioneer Top Fuel racer from Kansas City, Mo., in the late 1950s — he was A/Dragster runner-up to Don Garlits at the 1958 AHRA Nationals — and was a popular runner with his 392-powered dragster, which was dubbed The Missouri Mule. According to one story, he didn’t begin racing until age 42 and was killed a decade later, at an AHRA divisional event at Springfield Ozark Dragway in Missouri on June 27, 1965, the same tragic weekend that fellow racer Tex Randall was killed at Aquasco Speedway in Maryland. Cangelose died as the result of injuries suffered when his dragster went off the end of the track after the parachute ripped away during a 197-mph run.

A resident of Kansas City, Mo., by way of Sioux Falls, S.D., and Bellflower, Calif., Al Vander Woude and his line of Flying Dutchman Funny Cars were a force on the match race scene in the late 1960s. In California, he raced in Pure Stock, then was in on the ground floor of the Funny Car revolution as a pioneer in Factory Experimental before moving to Missouri in 1969. All of his cars were of his own design, and for the most part, he personally constructed or supervised the construction of his cars from the wheels up after learning all things mechanical as a U.S. Navy Seabee. After sitting out more than a decade, the Vander Woude and Flying Dutchman names returned to the dragstrip in the late 1980s with a car owned by his son, Don, and drivers Terry Haddock and Jack Wyatt. The elder Vander Woude died in 2001 at age 67.

The Kansas City, Mo.-based team of engine builder John Pusch and driver Don Cain was a standout in NHRA’s Top Gas class — winning five Division 5 championships and scoring three national event wins, including at the 1967 U.S. Nationals — until the class was dissolved at the end of the 1971 season. They switched to nitro Funny Car for 1972 and immediately found success with a new 392-powered Mustang, winning the Division 5 championship and finishing second in the Western Conference points in their first year of Funny Car racing in 1972. They later switched to a Satellite body. Cain got his first ride in a nitro car driving Rod Stuckey’s Top Fueler (1963-64) and Bob Sullivan’s Pandemonium (1965) before joining Pusch in 1966. Cain retired from competition after the 1974 season, and after his retirement from General Motors in 1988, he and his wife, Nan, opened K.C. Street Rod Parts in Kansas City.

The St. Louis-based team of driver Paul Radici and crew chief Dave Wise was one of the region’s most popular Funny Car outfits and a regular runner on the national event, match race, and Coca-Cola Cavalcade of Stars tours. Radici, nicknamed “Wrong Way” for his wild burnouts (or, according to another source, for missing the freeway off-ramp to Northern California’s Fremont Raceway six times in one morning), and Wise, owner of Wise Speed Shop, at one time held the NHRA eighth-mile record. The duo first teamed on a Firebird-bodied machine in 1969, followed by a Camaro and a very successful Vega. In the late 1970s, they helped popular Al Hofmann get his start in nitro Funny Car when they sold him their entire operation, including the Vega, which became Hofmann’s China Syndrome machine. Radici drove the car for Hofmann to help show him the ropes before handing over the wheel to “Big Al.”

Bill Daily, of Springfield, Mo., is best-known for his line of Pegasus entries but got his nitro racing start in 1977 in an ex-Tom Hoover Monza dubbed The Lone Ranger. A Plymouth Arrow — the first Pegasus — followed a few years later (at one point, he ran two Arrows, with Larry Brown driving a second entry), but his car was destroyed in a fire and replaced by a Corvette (the ex-Powers Steel entry) and then a Firenza and, later, a Top Fueler, driven by both Daily and John Davisson.

By all accounts, Joplin, Mo., racer Omar "the Tentmaker" Carrothers was a “unique” individual, but he raced hard with his Mustang in the early 1970s and frequented the West Coast, though he probably wished he hadn’t. A crash at Orange County Int'l Raceway destroyed his first car, a Barracuda, and a nasty fire at Lions Drag Strip’s Grand Premiere in 1972 heavily damaged a second car. He later teamed with fellow Joplin-based racer/owner Terry Ivey on a Charger-bodied machine.

St. Louis’ own Ira Hollensbe made a name for himself on the match race circuit with a string of Funny Cars (Barracuda, Mustang, Vega) dubbed Super Star. One of Hollensbe’s first cars was driven by Curt Wasson, a well-known Chevy racer and popular draw with his own 427-powered Superstitious Camaro who was between rides at the time. Hollensbe continued to race throughout 1976 and had two of his more memorable moments in Florida. In March 1975, he beat Jerry Gwynn at Desoto Memorial Speedway to earn the official-sounding title of Florida State Funny Car Champion. A year later, he suffered a bad fire on a qualifying run at the NHRA Gatornationals and retired shortly after. Wasson also continued to compete but was killed in a highway accident shortly after completing construction of a new Monza, dubbed Million Dollar Baby, which then was sold to Billy Graham. 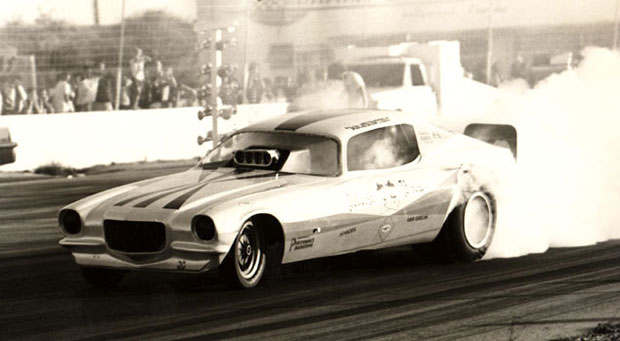 Jim and Jerry Jokerst called their wild-looking '70 Camaro Mr. Sinister, an apt name for the brothers' wicked-looking Chevy. The St. Louis-based car was pure Chevy, down to its 427 powerplant, and was the third in a line of cars for the brothers; Jim always did the driving. After this car came a Vega named Snidely Whiplash that the brothers campaigned for several seasons. Don Zoellner bought this car and later the Vega from the brothers, who quit racing in 1976. Zoellner renamed the Vega Spirit of St. Louis and raced into the late 1970s. 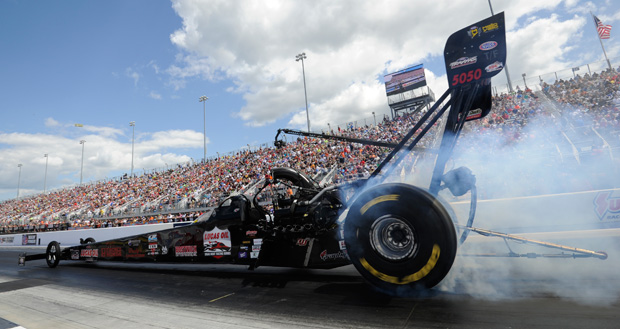 Scott Palmer is today’s Missouri banner-carrier with his hard-running independent Top Fueler. He competed in Super Gas and then in Top Alcohol Funny Car for four seasons before moving to Top Fuel in 2002. He competed at NHRA events every season and has proven himself an adept marketer with a series of outside-the-box sponsorships. He’s also the owner of Scott Rods Custom Trucks & Cars, a paint and body shop in Nixa, Mo.