The Chevrolet Performance U.S. Nationals is such a huge and historic event that winning the prestigious race even once can make a driver’s career, but throughout the years, a number of nitro-fueled drivers have tasted the fruits of Indy victory on multiple occasions. As we continue to celebrate the history of Funny Car this year, let's take a look at some of Indy’s Funny Car heroes, those with more than one win at the "Big Go."

Ed McCulloch (five Funny Car wins, plus one in Top Fuel): Even though the retired nitro legend hasn’t driven a Funny Car in more than two decades, “the Ace” still owns the record for most Funny Car wins at the Big Go, having compiled five there. His first, in the Whipple & McCulloch entry in 1971, also was his first NHRA victory. He repeated his Indy triumph as part of a spectacular 1972 season in his new Revellution Dodge Demon that began with three straight wins (Pomona, Gainesville, and Columbus, plus the March Meet). He would runner-up there the following year, but it would be eight long years before he scored again, at the wheel of the Super Shops Arrow in 1980. Eight years after that, he posted another victory, this time at the wheel of Larry Minor’s Miller High Life Oldsmobile, then triumphed again in the same car two years later, in 1990. Just for good measure, he added a Top Fuel win in Minor’s McDonald’s Top Fueler in 1992, becoming just the third driver to win in both nitro classes in Indy.

Don Prudhomme (four wins, plus three in Top Fuel): “The Snake” already had three Indy Top Fuel titles (1965, 1969, and 1970) by the time he scored his first U.S. Nationals Funny Car crown in 1973, at the wheel of his Carefree Gum Barracuda, beating McCulloch in the final (pictured) to end "the Ace's" two-year reign at the event. Prudhomme made it to the final round of the year’s biggest race the next five seasons but only won twice, in 1974 (Army Barracuda) and 1977 (Army Arrow). It’s ironic that he never won Indy at the wheel of his vaunted Army Monza, one of the more dominant cars in NHRA history (13 wins in 16 events, 1975-76); the car was runner-up in 1975 to Raymond Beadle’s Blue Max and in 1976 – his only round-loss in national event competition that year – to Gary Burgin’s Orange Baron Mustang. After his 1977 win, he was runner-up to longtime friend and rival Tom McEwen in the emotional 1978 final, shortly after the death of McEwen’s son, Jamie. Prudhomme wouldn’t make it back to the Indy final for more than a decade, but he finished his Funny Car career in 1989 by winning Indy in a big way, setting the national record and winning the specialty race Sunday and the event Monday.

John Force (four wins): With 135 wins, you’d think that Force would have accumulated more than just the four Funny Car victories that he shares with his idol, Don Prudhomme, but that’s just testament to how hard it is to win the event. Force won Indy for the first time in grand fashion in 1993 by scoring in Sunday’s specialty event and winning Monday’s event on a single run when upset-minded Kenji Okazaki had to shut off on the starting line. Force won Indy again in 1996 with another weekend sweep and triumphed in 1998 and 2002. Incredibly, it has been 11 years since he last won the Big Go. That’s not to say that his team has not enjoyed success there: John Force Racing drivers Robert Hight, Mike Neff, and Ashley Force Hood have won the last five Indy Funny Car crowns and six of the last seven; if you count 2004 winner Gary Densham during his tenure with JFR, it’s seven of the last nine. Force, who was runner-up in 2010 to Ashley in his most recent final there, also was runner-up in Indy in 1991 and 1995.

Cruz Pedregon (three wins): In the mid-1990s, the Cruzer had a Don Prudhomme-like stranglehold on Indy, winning in three of four years (1992, 1994-95) in the McDonald’s sponsored entries of first Larry Minor then Joe Gibbs, but, as it has for John Force, Indy has been an elusive mistress. Also like Force, it has been a long time since he has won it, and he has only been back to the final once since his last win there 18 years ago, when he was runner-up to Gary Densham in 2004. His most recent victory in Indy came in 2008, when he won Sunday’s specialty race, his lone score in 10 appearances in the bonus event.

Robert Hight (three wins): For a four-year span (2006-09), Hight’s name was all over the Funny Car landscape in Indy. He won the Big Go for the first time in 2006, was runner-up in 2007, won again in 2008, and was runner-up in 2009. His runner-up in 2009 was especially memorable because he needed to reach the final round just to make the Countdown, and he did it in controversial style by beating his boss, John Force, in the semifinals, after Force smoked the tires. The incident led to a now-famous altercation between Force and Tony Pedregon (who lost the other semifinal to Force’s daughter Ashley) at the top end that made national TV highlights everywhere. And, of course, Hight went on to win the season championship that year. Hight added a third Indy win in 2013.

Raymond Beadle (two wins): The driver of the famed Blue Max only appeared in two Indy finals, and he won them both, upsetting Don Prudhomme, who had won four of the season’s first five races in 1975, with his Mustang II, and besting Jim Dunn in 1981 with his Plymouth Horizon to put a capper on what would be his third straight season championship.

Kenny Bernstein (two wins, plus one in Top Fuel): The "King of Speed's" first Indy win in 1983 was an unforgettable one as the driver of the Budweiser King Mercury LN-7 won his sponsor’s big event, the Big Bud Shootout, Sunday, then returned Monday and romped through the field to become the first to double up. His accomplishments at that event were especially notable because for the first time in history, all 16 cars had qualified in the fives, led by Bernstein at a stunning 5.81 at 256.41, which was backed up for a new NHRA speed mark. He returned to win again in 1987 in his "Batmobile" Buick, and after moving to Top Fuel in 1990, he added a third Indy win in 1991, becoming just the second driver (behind Don Prudhomme) to win in both nitro classes in Indy. He also was runner-up there in 1984 (to Jim Head) and 1988 (to Ed McCulloch) and added a second specialty-event score in 1985.

Whit Bazemore (two wins): Bazemore is another two-time Indy winner, scoring for the first time in 1997 with his own team, behind the wheel of a Winston-sponsored Mustang, and titling again in 2001 as a member of the Don Schumacher Racing organization with the Matco-sponsored Dodge. He also was runner-up in 2000 (to Jim Epler) and 2006 (to Robert Hight).

Ashley Force Hood (two wins): The oldest racing daughter of 16-time champ John Force first got on the Indy scoreboard in 2004 with a win in Top Alcohol Dragster when she defeated the late Shelly Howard in the first all-female U.S. Nationals final round. Force Hood came back to add not just one Funny Car score, in 2009, but another in 2010 with her Castrol GTX entry. She beat a teammate in both finals, taking down Robert Hight in 2009 and her dad in 2010. 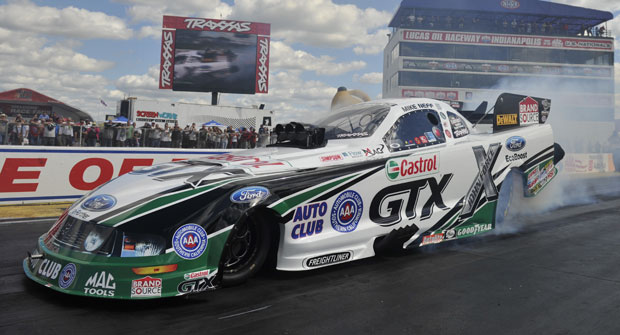 Mike Neff: (Two wins): Tuner turned driver turned tuner won the Big Go back to back in 2011-12, becoming just the fifth Funny Car driver in history to double, but "Zippy" didn't get a chance for a unprecedented driving three-peat but got to the winner's circle for a third straight year after tuning Robert Hight to victory in 2013.