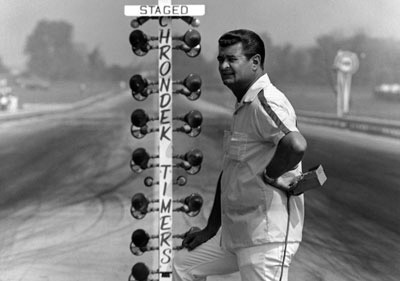 Last Thursday, on the eve of the national event at his old home track, former NHRA Chief Starter Mark Lyle was remembered by family, friends, and the racing community at a celebration of life at Pacific Raceways. As he was eulogized by many, the recurring theme was that while Mark had a firm hand on the starting line, he was willing to debate his decisions with anyone who asked.

And, of course, parallels were drawn between Lyle and the man who for so many years personified the position, the late great Eddie Hiram “Buster” Couch. We lost Buster a long time ago – Jan. 12, 2002, to be exact – but I think it’s safe to say that everyone who followed him – Rick Stewart, Lyle, and now Mike Gittings – probably feels that he still was watching their every move.

Lyle was the chief starter evolved, someone mentally prepared to deal with the complexities of the sport today, where sponsorships, egos, pressure, scheduling, and everything else seems to be magnified tenfold. Couch was the self-professed Georgia redneck, the “Not in my house” kind of guy necessary back in the early days of the sport when Couch himself once professed that “fighting was as much a part of the sport as racing.” 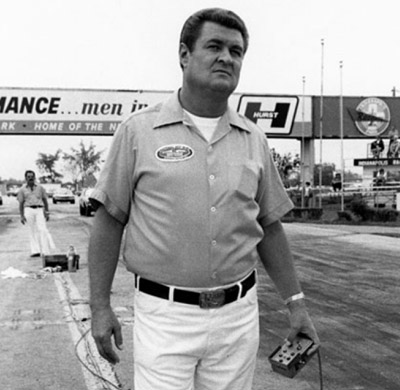 Buster stories have been handed down like cherished family memories, especially among members of the Dragster staff, who if we didn’t witness them were certainly told about them by people who did. He was tough but loved, and back in an era of less political correctness and a more relaxed atmosphere, you never knew what was going to happen on the starting line.

For as big and fearless of a guy as Couch portrayed, he was deathly afraid of spiders and snakes, and of flying. Former Top Fuel driver Frank Bradley thought it would be fun to terrorize him, so as “the Beard” was smoking out past Couch on a burnout, he tossed a rubber snake out at Couch’s feet; I believe this was at either the 1982 or 1983 World Finals at Orange County Int’l Raceway. Retribution came swiftly. When Bradley came back for his next pass, Couch was ready. As Bradley eased his digger into the staging beams, Couch calmly poured two buckets of ice into his lap. That’s a scene you’d never see today, but as I said, things were a little more “relaxed” back then. 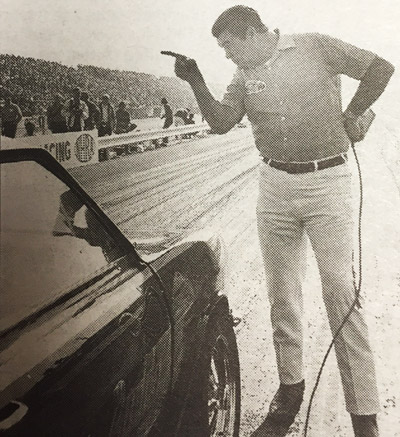 There are countless tales of drivers trying to tell Couch how to run “his” starting line, all of them met with Couch’s special brand of response.

The name of the driver and even the class escape me, but one Super-class driver came to “visit” with Couch before a run, telling him in no uncertain terms of his own preferred deep-staging procedure and how Couch should handle it. Pretty much the gist of it was that when the racer was staged how he preferred, he would give Couch a nod, and then he could start the race. Of course, as soon as that driver’s front tire tickled the beam, Couch threw the switch, then later calmly explained to him, “I couldn’t remember if you said you were gonna wave or nod.” Message received.

In an interview Couch did with LA Times reporter Shav Glick on the eve of his retirement from the starting line in late 1995, Couch recollected, "One guy had a reputation as a quick starter, and I heard he was bragging about how he knew when I was going to press the button because my thumb moved first. Well, one day he was on the line, and I twitched my thumb, and he was halfway down the track before the green light came on. I doubt if he ever checked my thumb after that.”

I remember the 1983 Summernationals, where Connie Kalitta got into a protracted staging battle with Jody Smart in the semifinals. The story goes that Kalitta came to the line with suspect oil pressure; maybe Smart knew that, maybe he didn't. When the Tree finally turned green, Kalitta fireballed an engine. He pulled off the track into the grass (there were no guardwalls then), slammed his helmet to the ground, and charged back to the starting line to complain to Couch about the length of time it took to get the Tree. Kalitta was hot, and Couch reportedly just grinned and told him, "I’ll roll around in the grass and wrassle with you if you want.” 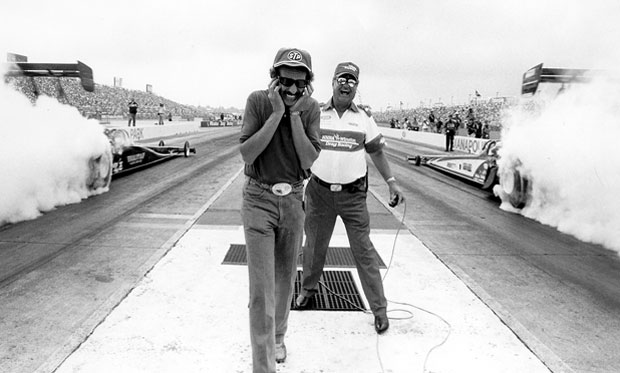 This is one of my favorite photos of Buster, and it speaks volumes. That's NASCAR king Richard Petty seeming a bit overwhelmed by the power of side-by-side burnouts by Connie Kalitta and Doug Herbert at the 1992 U.S. Nationals. The look of joy on Buster's face is priceless.

Former NHRA Vice President Steve Gibbs, NHRA’s longtime competition director, was Couch’s boss, tasked with oversight. For all of his bluster, Couch was so deeply loved and respected and even watched over lest his “redneck tendencies” get the better of him. Gibbs remembers visiting Couch’s dear wife, Anne, in the hospital as she lay dying from cancer. “Her sole concern while she was dying was Buster,” he recalled. “She had a little yellow notepad, and she’d write, ‘Make sure Buster does this’ and “Make sure Buster does that’ and ‘Buster will need this.’ We all looked after him.

“He was a challenge,” Gibbs remembered fondly. “He liked to fight; he told me once he should have been a hockey player so he could get paid to fight. He was a unique individual, and I just had to deal with it because there’s no doubt that he was the man we needed for that time in the sport’s history. It was a different time, a different era. 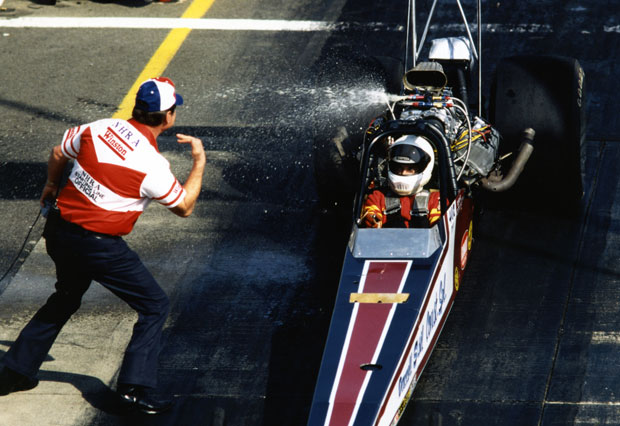 “He was as good a starter as there’s ever been. He didn’t let the racers start him, and some of those guys are pretty crafty. He probably wouldn’t like the job today with as much automation as we have now – Auto Start and all of that, which I think is necessary – because Buster started every race, deciding with his thumb when it was time for the cars to go.”

And Couch was not above a little showmanship to let people know he was the boss.

“I remember one year at Atlanta, [Larry] Morgan and [Bob] Glidden got into a burndown. Buster was out there waving his arms, putting on a show, and finally backed them both off,” said Gibbs. “He walked over to each of the cars, acting like he was really mad. He opened Glidden’s door, and Bob’s waiting to get yelled out, and Buster just says. ‘Hey Bob, how ya doing? How’s Etta? How’s the kids?’ Then he slams the door and storms over to Morgan’s car. ‘Hey Larry, you having a nice day? How’s it going?’ Then slams his door. They fired up and raced and were laughing so hard at the other end of the track about how Buster took the edge off the whole thing by doing that.” 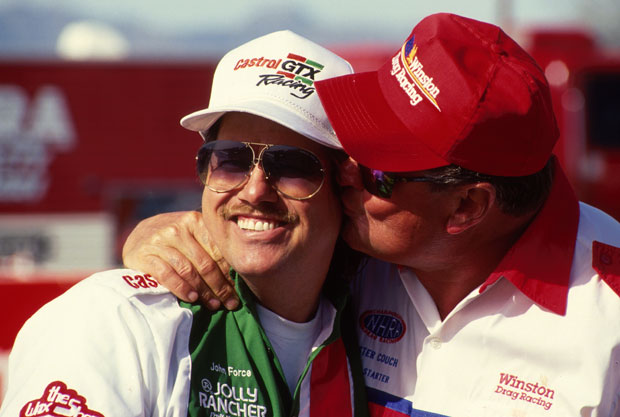 Drivers like John Force loved Buster, and he loved 'em right back.

As much as drivers liked to prank him – beyond the snake-tossing episodes (there was more than one) – there was love and respect, too. Top Fuel driver Dale Funk was seen handing Couch a cold beer one time, and Chris Karamesines once reached out and handed him a bottle of booze as he was staging.

Couch was good with giving a practical joke, too. Gibbs remembered at the first Gatornationals how the division directors (“a pretty rowdy bunch back then”) were seeking adult beverages in the dry county, and Couch, with his local knowledge after years as the Division 2 director, pointed them down the road to sleepy Waldo, Fla., with tales of an underground speakeasy below a gas station. Of course, it didn’t exist, but the DDs spent the night roaming around looking for it.

I remember an early-1980s story being told of how Scott Kalitta, then driving an A/Fuel Dragster, was having some relationship problems with his girlfriend and reportedly had been dodging her phone calls. So, of course, when he pulls to the starting line for a qualifying pass, Couch handed him a telephone as he was preparing to stage. 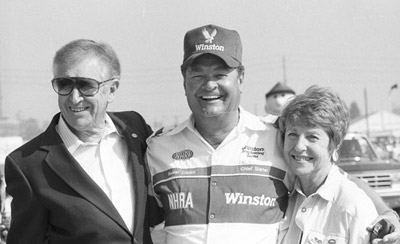 Wally and Barbara Parks with Buster; I miss all three of them.

My personal favorite memories of Buster are of a Foghorn Leghorn-like uncle, always ready to give you a little crap (“Son! I say, son! Don’t walk across my starting line like that.”) but a genuine good guy. Back in the 1980s, we would finish proofing the magazine Wednesday, hop on a red-eye while the issue was being printed Thursday, and have a dozen or so FedEx’d to the event to give to that week’s cover or feature subjects, and I always saved one for Buster. He would see me coming his way with one in my hand, and his face would light up with a big ol’ grin. “Thank you, Mr. Burgess. I surely do appreciate it.”

There have been a lot of larger-than-life characters in our sport – guys like Richard Tharp, Funk, Chip Woodall, “the Greek,” Raymond Beadle; gosh, I could go on and on – but Buster Couch will always be among the larger, both for his presence on the starting line and impression he left on everyone who knew him.