After last week’s pause to remember some of our fallen friends, we return to the Vega panel thread. There’s not a whole lot of new info to share but some cool photos you guys have sent in, so let’s make this a show and tell.

The Insider’s “photo insider,” legendary lensman Steve Reyes, sent me a huge collection of his stuff on Vega panels. 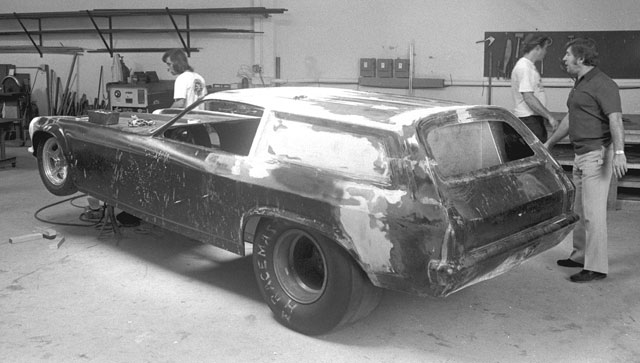 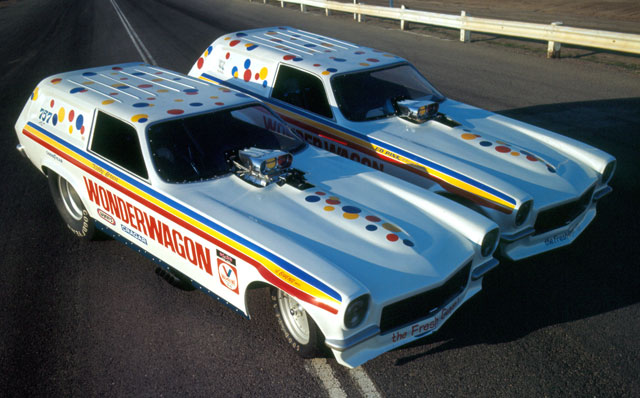 A couple of photos from the Wonder Wagon photo shoot at Orange County Int’l Raceway. In the second photo you can see the height difference between the two cars, with the Kelly Brown ride (closest to camera) a low-slung purpose-built chassis by Buttera and the Glenn Way car a taller, older-style chassis necessary because of Way’s taller stature. 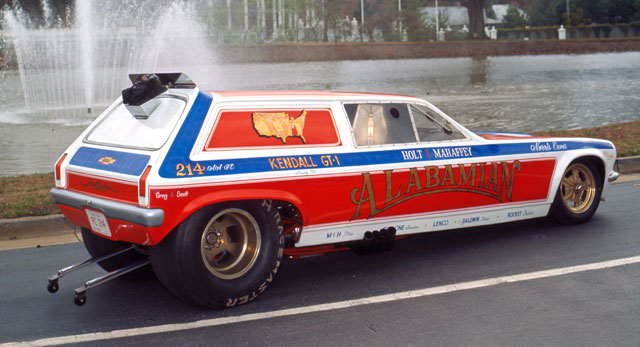 Here are two of the other notable Vega panel nitro cars, Bill Rogers’ Travellin' Texan (top) and the short-lived, rear-engine Alabamian of Bill Holt and driver Wayne Mahaffey. Rogers, a former Top Fuel racer out of Corpus Christi, Texas, somehow kept his car out of trouble and ran it for several years. Prior to this car, he ran the Mercury Cougar-bodied Texas Super Cougar and then renamed it Travellin' Texan before moving to the Vega in 1972. After a few years (and a lot of dollars), Rogers swapped his blower for injectors and ran the car as an A/FC, according to Reyes. 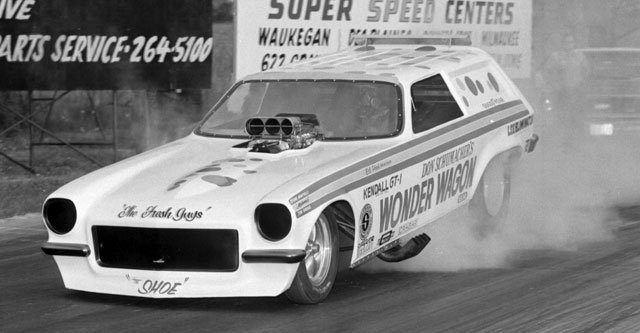 Here’s Don Schumacher in what I think must be the ill-fated first pass in the Vega panel at Great Lakes Dragaway after he took over the Wonder Bread deal. The car got way out of shape (some folks even remember it taking an excursion into the grass area lining the track; Schumacher says no) and convinced “The Shoe” that this was not a good fit, after which he returned to his Barracuda bodies.

And here’s the Ohio-based Russell-Cook-Bolender Trick Truck injected fuel Funny Car with Larry Russell at the controls at the 1973 U.S. Nationals.

Texan Clayton Pool has run everything from nitro Funny Car to Alcohol Funny Cars and altereds, Pro Mods, and even a rocket kart, but he also wheeled this injected fuel Vega wagon at Green Valley Race City in 1972. Dig the see-through side windows, a rarity for the body style.

Here’s an incredible photo of Gary Gabelich’s outrageous four-wheel-drive, rear-engine Vega panel, caught in mid-turmoil by another legendary ace shooter, Jere Alhadeff, shortly before its demise at Orange County Int’l Raceway. Alhadeff tells me he didn’t even know the car was going to be running that day or that he would get what’s a pretty rare shot of the car in action. “I just happened to be at OCIR shooting a feature. We were on the return road when I heard them and then saw them fire it up by the starting line. I quickly switched to a longer lens and shot this photo on the test run. When I went over to talk with Gary and crew at that time, they said that they were not going to make another run. After I left, they decided to make another run (which I have always heard was without the body on the monocoque chassis), and that was the run where he went over the guardrail doing himself so much physical damage. Gary told me later on that his leg was so severely damaged they wanted to remove it, but he told them as long as he could stand the pain, he was going to keep it and see if it would heal.”

Bob Snyder passed along the photo of this Vega, shot at the 1978 AHRA Winternationals. Research tells us it’s the car owned by Arizonians Ed and Jack Maroney and driven by Mike Day. Although it looks like a Funny Car, apparently it was campaigned as a Fuel Altered and held the AHRA record holder in 1973 with an 8.26. Reportedly, the body came from the same mold as the Wonder Wagon cars. The lightweight car (1,400 pounds wet) was powered by the 326-cid, small-block Chevy out of Day’s fiat and ran injected on 95 percent nitro. 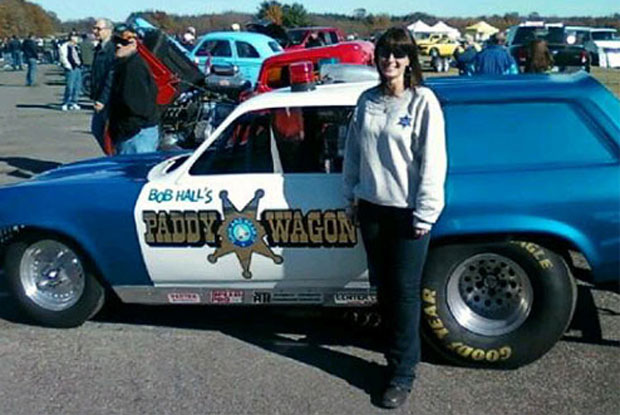 Rich Hanna dropped me a line to let me know that Bob Hall’s timeless Paddy Wagon Vega Panel wheelstander, which was built in the early 1970s and raced into the mid-2000s, is now owned by Alyson Kurtas, who is the girlfriend of Hanna team jet Funny Car driver Ken Hall. According to Hanna, she hopes to become the first woman licensed in a wheelstander later this year.

With all of the love being doted on Chevy’s little hauler, Darryl Judd (“a dyed-in-the-wool Ford fan") wanted to know if there were any Pinto wagon drag race cars. “I don’t think I ever saw one but maybe a little more research for us lowly Ford fans?” he pleaded.

Your wish is my command, Darryl. We all know that there were a ton of Pinto coupes in Funny Car (Dale Pulde/Mickey Thompson, Al Hanna, the California Charger, Gary Densham, Bill Schifsky/Doc Halladay, etc.) and in Pro Stock (Bob Glidden, Wayne Gapp, Don Nicholson, etc.) but not many panel wagons.

The first car that leaped to mind was Gary Coe’s mid-1970s Gunfighter Pro Stocker from the great Northwest. Coe raced the Pinto wagon from 1974 to 1979, in the Pro Stock class, and  qualified for several NHRA events and was even credited with a round-win against (not yet “The Professor”) Warren Johnson at the 1975 Fallnationals in Seattle, when W.J. was a first-round no-show. Coe lost in round two to Glidden. After more than two decades out of the saddle to build his towing business (and a failed bid for a Senate seat), Coe now competes in Stock eliminator with an AAA/SA Cobra Jet. You can check out his website here.

After Coe, the DragList site lists only Danny O’Day’s wheelstander as a historic Pinto panel. Wonder why the disparity …

I may be wrong, but I think that pretty much wraps up the Vega panel thread. Thanks to all who followed and contributed. We all learned a lot.