Lions re-created: Small in size, big in fun and memories

For those who were at the recent Lions Drag Strip Reunion at the NHRA Museum and even for those who read my report last week, one thing that caught everyone’s eyes was Rick Voegelin’s amazing scale model of the famed facility.

The small-scale – and working! – strip is amazing in its exacting detail, much to the delight of the Lions faithful who last saw the real thing in action 40 years ago. I’ve known Rick for a very long time, both as a fellow journalist through his years at Petersen Publishing and later as a PR rep for numerous Pro Stock teams, so when I asked him for details and additional photos of the model, he was very obliging. Below is his description of the project. Enjoy! 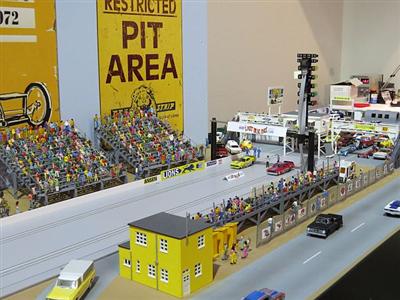 The Lions Drag Strip HO-scale slot-car track is based on the real Lions Drag Strip, circa 1972. It's an impression of the track (rather than an exact model) that illustrates many of the distinctive features of the famed Long Beach, Calif., facility. These include a pedestrian crossover bridge and elevated timing/announcer booth behind the starting line, large spectator grandstands on the right side of the track, and low grandstands adjacent to the starting line on the left side; the return road and yellow time-slip booth; the main concession stand at the entrance to the pits; and the Coca-Cola sign at the entrance near 223rd and Alameda Street. 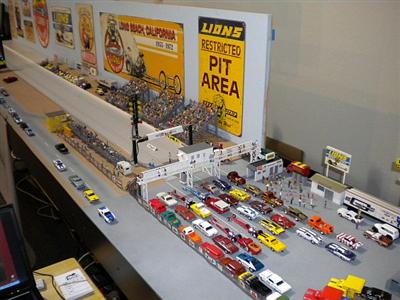 The Lions slot-car dragstrip was constructed in 2010 to host events organized by the Nitroslots.com online forum. This group hosts a series of proxy races ("national events") around the country in which racers mail in their cars and the host races them on their behalf. The cars that compete in the NTRA (National Thunder Rod Association) chiefly use Aurora Thunder Jet and AFX slot-car chassis from the '60s and '70s, with both vintage and modern bodies. Classes range from Stock and Super Stock to Gassers, Pro Stock, Nostalgia Funny Car, and Top Fuel.

The Lions slot-car dragstrip measures 24 feet in length, with an HO-scale quarter-mile timed section and 8 feet of shutoff. A computer timing system displays elapsed times, reaction times, top speed, and margin of victory. The Christmas Tree can be programmed for a full .5-second countdown or a .4-second Pro start. A variable power supply delivers 12 to 24 volts DC to the track, depending on which class is competing. 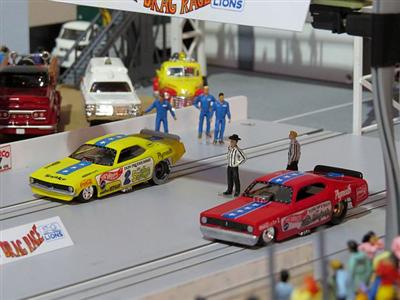 I've added scenery items and diorama details using reference photos from period magazines, Don Gillespie's Lions DVD documentaries, and Internet searches. All of the structures are scratch-built or modified model-railroad buildings. My wife, Franca, placed all of the scale spectators in the grandstands and made the signs and graphics for the track.

I attended my first drag race at Lions in 1965 and raced my '55 Chevy there in the '60s. Sadly, I also covered the Last Drag Race for Car Craft in December 1972. With this project, I wanted to re-create the magic of Lions on a small scale. The smiles on the faces of the husbands, wives, children, and grandparents who raced at the Lions Reunion told me that I had achieved that goal.